We couldn’t do what we do at Compassion without our volunteers. At our office in London, Ontario, the work of about two full-time staff is completed by volunteers! They sort through all of the precious letters you send so they can be quickly sent off to your sponsored child. These volunteers give their time freely so that you can have a better, more personalized experience—and so that children in poverty can experience a loving bond with their sponsor.

“We so appreciate each and every one of them. They are like a part of our family,” says Brian Cuz, manager of the team who processes your letters. “It is a joy to share life and do ministry with them.” 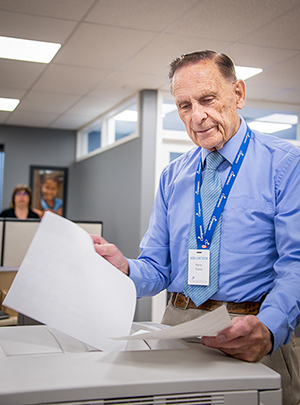 One of our amazing office volunteers whose life and example we’d like to share with you is Harry Finnis. Finnis has been supporting Compassion for more than four decades! He has been volunteering with Compassion for seven of those years. He opens your letters, scans them into our system, and makes sure any keepsakes you send are labeled to be sent to the child. Finnis has also volunteered at events for Compassion, talking to potential sponsors.

Finnis has been serving the Lord his whole life, and Compassion has been just one stage in that lifelong quest. He has had many jobs and roles, and Finnis says the Lord brought each one to him.

Originally from the UK, Finnis was just 14 years old when he was evacuated from London during WWII to live in Wales. He started working at a dairy, living in a group of cottages with other evacuees. But when he was 18, he was conscripted into service. Since that time, he has held many roles in the army and as a private citizen: a diesel fitter, a representative for a laundry company, a BBC television trainee floor manager, an administrator of mines in the Northwest Territories, and assistant to the Dean at St. George’s Chapel at Windsor castle. He was even part of the wedding of Charles and Camilla and the funeral of the Queen Mother.

He first heard about Compassion in 1970 at his church and started sponsoring a child in Ecuador—that makes 47 years he has been using his life and resources to advocate for children in poverty! In 2010, he started volunteering with Compassion.

“I felt very led to come here and very touched by Compassion’s ministry,” says Finnis. “I wanted to be obedient to God and be part of a ministry He loves.”

When asked why he has volunteered so faithfully for so many years, Finnis says, “It’s part of God’s calling. He asks us to look for those in need…everything I’ve done hasn’t been on my prompting.”

Now Finnis is beginning the next phase of his journey. He is moving back to the UK to be with his brother.

“I have one younger brother left living in the UK. I feel God wants me there…I feel God saying, ‘Go, I’ll have something for you there.’”

We are so thankful for how Mr. Finnis has faithfully dedicated his time to ensure children in poverty are cared for. We are honoured to have played a small part in his life of serving the Lord!

How can you “look for those in need” in your own life? Do you feel the Lord calling you toward a particular area of ministry?

If you are interested in helping children in poverty rise above their circumstances and find hope in the Lord, learn more about volunteering with Compassion.

Will the legacy you leave reflect the life you’ve lived?

Owen’s story: How sponsorship released him into his God-given potential