There’s only one thing left untouched in Christian’s home: A single wooden beam stands with a nail in it. Christian’s school medals hang proudly from the nail, just as he left them.

While his medals somehow defied Typhoon Haiyan’s rage on November 8th, the rest of this 9-year-old’s home was blown to pieces. His wooden shanty used to nestle between two concrete homes. The neighbours’ concrete walls still stand, but rubble and wood are now piled where Christian used to sleep.

Much of Christian’s town of Bogo was obliterated. An idyllic town on the coast of Cebu Island, it used to look like a postcard for paradise. But now it looks like winter on this tropical island—the trees bare and crooked after the winds stripped every leaf from their branches. 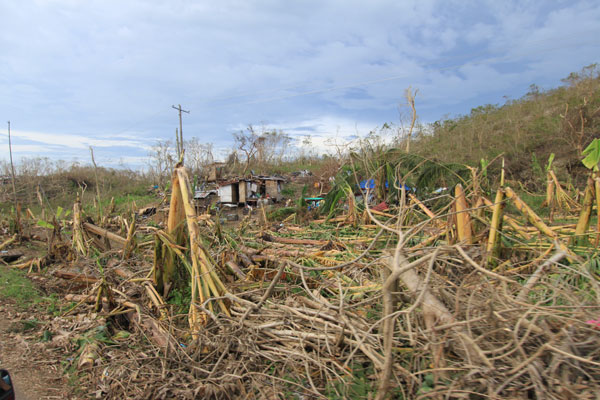 Christian is not a stranger to adversity. Last year, he lost his mother after she was bitten by a stray dog. His father is still alive, but he doesn’t work and he doesn’t take care of his son. Instead, Christian is being raised by his grandmother, Nora. She makes just 40 cents a day cleaning homes.

Christian is just one of the 149 children Compassion’s partner—the Bogo Full Gospel Assembly of God Church—brings love and support to. When a disaster strikes, the first assistance sponsored children get comes from the church partner. These churches have been trained to come up with a disaster response protocol unique to their area and needs. Most churches have also established strong links with local government agencies and non-government organizations to aid in a time of crisis.

The staff of these partners work tirelessly to assess the damage and the needs of the children to report back to Compassion Philippines. And already, Compassion has delivered the first round of emergency provisions to the families in Bogo, bringing things like food and water.

When asked how he hopes his sponsorship can help him and his grandmother, Christian says, “To help us rebuild,” and begins to cry. Grandma Nora cries along with him.