David is famous in his little village of Kiwangala, Uganda. He can’t take more than ten steps down the dirt roads of his community without someone stopping him to chat or waving at him from afar. He is loved and respected. In this community where nearly everyone keeps animals, David is their beloved veterinarian.

No one expects a veterinarian to come out of David’s hometown. David grew up on the plains of Nakatete, where large families live in mud homes with thatched roofs. Most people scratch out a living by planting cassava and maize and make about $20 a month. Kids who grow up here are at constant risk of malaria, parasites or other infections. Not many kids have the privilege of going to school. In the entire district, there are only 19 secondary schools for nearly 184,000 people.

David was one of ten children. His parents were subsistence farmers and struggled to provide enough for all their children. During good times, they’d eat twice a day. In bad times, only once. David had only one shirt and a pair of shorts to wear at all times, and no shoes. He slept with all his siblings on the floor, cuddled on top of their mom’s old clothes for a mattress.

But when David was seven years old, he was sponsored through Compassion. He had the chance to go to school, receive health care and get nutritional support. He met and accepted Christ at his centre and he learned the value of helping others.

David’s success has made him realize it is possible to get out of poverty, and now he teaches others to do the same.

At the centre, David also learned skills like carpentry, farming and goat rearing. Whenever he received money for a Christmas gift through Compassion, he would buy animals, such as pigs. He developed a love for farming through his time at the Compassion centre.

After David graduated from Compassion at age 21, he went on to study farming at a local farm school. Three years later, he became a veterinarian.

“After I became a veterinary officer, I went to my mother’s village in Lwaggulwe to treat animals. I became very popular and people gave me a lot of business,” says David. “This encouraged me to become self employed. I started out with a nursery bed for corono coffee, pine trees and fruit trees. I would sell the plants and get money. I also continued to treat animals and both these ventures brought in money for me.” 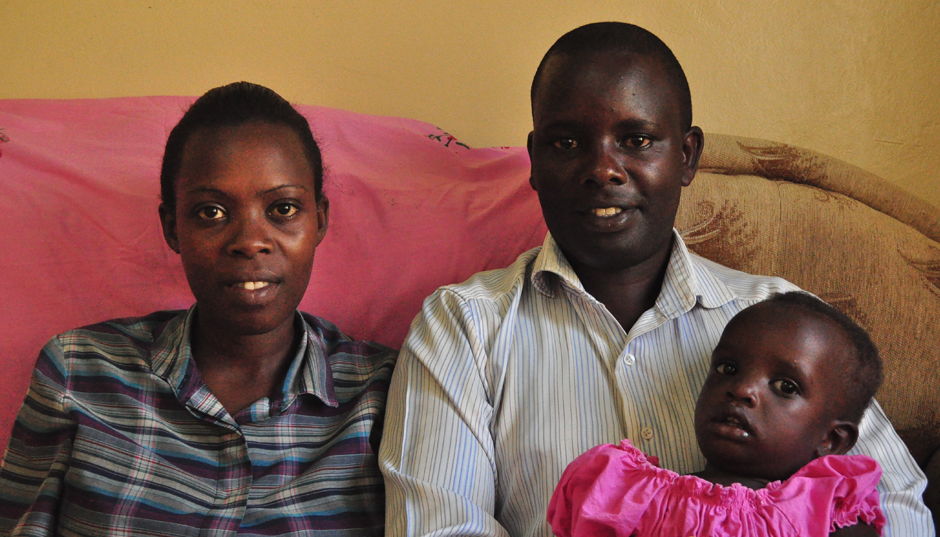 Now, 30-year-old David owns one and a half acres of banana plantations, four acres of coffee and four acres of trees. He has also built a family house and eight rooms for rent.

Last year, David earned enough profit to start a small farm shop. He sells medicine for treating crops and animals, improved seeds, fertilizers and other necessities for farmers. He recently earned enough to buy two motorcycles to help him in his business.

David’s success has made him realize it is possible to get out of poverty, and now he teaches others to do the same. He donates coffee seedlings to churches in his area to help them earn some money. David also wanted to help locals improve their farming techniques to raise their families out of poverty, so he started an agriculture program in his community.

David also started a program to reach out to youth, teaching them skills to get out of poverty, along with lessons on important social issues, such as responsibility, abstinence and the dangers of pornography.

Currently David is even writing a book in his local language to help others in his community learn how to escape from their poverty. He observed that some Christians in his community relied on prayer to get out of poverty, but didn’t put in the hard work necessary as well. David wants to help change the culture by reminding local Christians that they need to pray, but also need to be responsible and hard-working.

David continues to speak up for children in poverty as a chairperson at his former child development centre. He got the opportunities he needed to escape poverty through Compassion. Now David is a transformed man—one helping others get out of poverty too.

Story and photos by Caroline A. Mwinemwesigwa