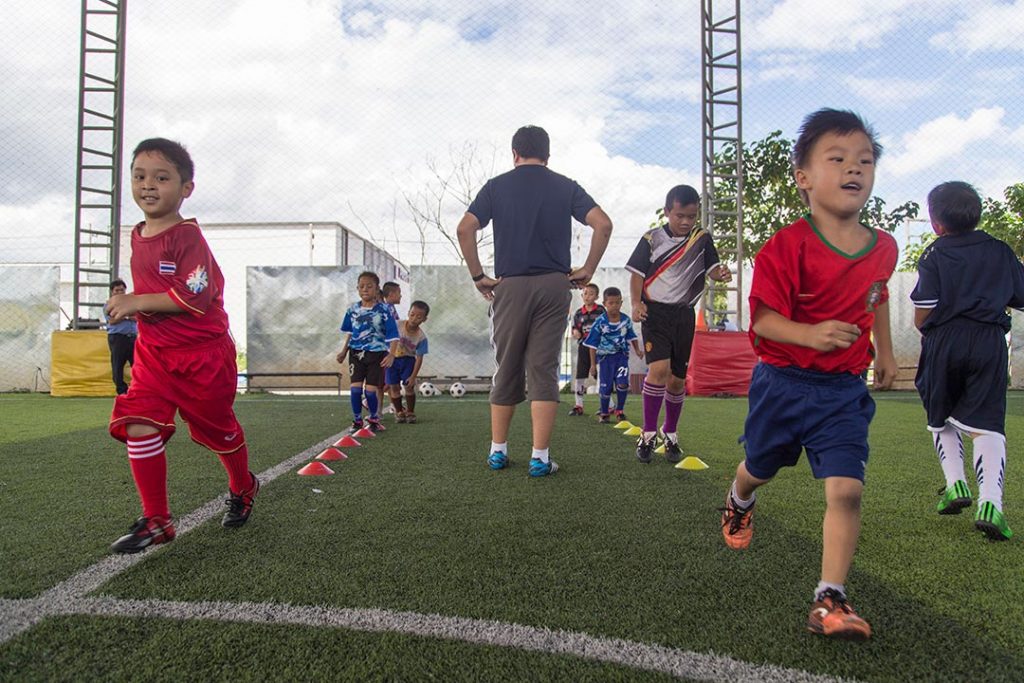 For hours on end, you can find young boys crowded around sleek, flat-screen monitors in Thailand’s ubiquitous “game parlours.” In the Kampang Ngam slum in the northern city of Chiang Mai, these stores are often filled with children lured in from the slum with the game parlours’ easy access and low cost. The brightly lit and often air-conditioned rooms are a relief from their cramped houses.

At all hours, day and night, boys as young as six will exchange their lunch money for computer time for only 25 cents an hour. Captivated by free online games, they are not unlike addicts, unable and unwilling to cut the ties to the only escape they have from life in the slum.

But the game parlours hide a sinister and dangerous secret. These unsupervised establishments full of impoverished children are prime targets for recruiters looking to pull boys and young men into the sex trade. 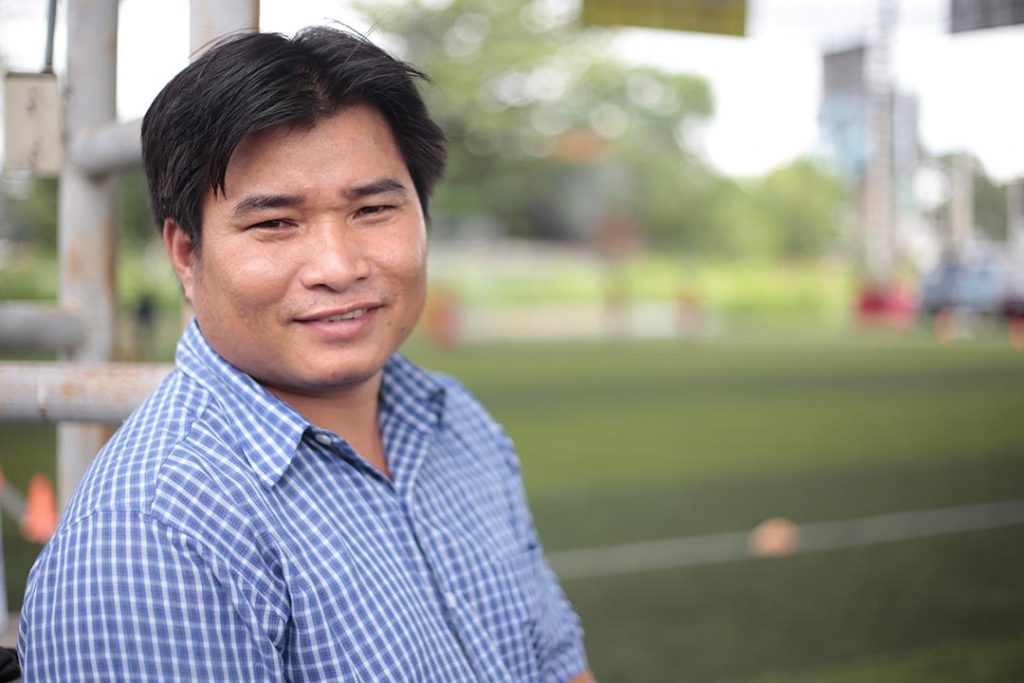 Mr. Wanchai Wankasamsan, the director of the Compassion centre at the Chiang Mai Acts of Grace Church.

Mr. Wanchai Wankasamsan is the director of the Compassion centre at the Chiang Mai Acts of Grace Church. He has been working with families in the Kampang Ngam slum for more than five years. He says children as young as 10 are often approached in these game parlours by their peers or older children who are already actively selling their bodies to foreign tourists. The children who have little other hope of escaping poverty are lured by “easy” money and accommodations.

“The older boys recruit younger ones from these game parlours, and they are all paid by foreign tourists. The foreigners often then take the boys to nearby hotels,” Wanchai says, “Sometimes the foreigner will become attached to a particular boy, calling him his boyfriend, and sending money from the foreign country to this boy.”

But how does it get to that point, and where are the parents? Mr. Wanchai answers with a heavy sigh, “The problems begin at home.” 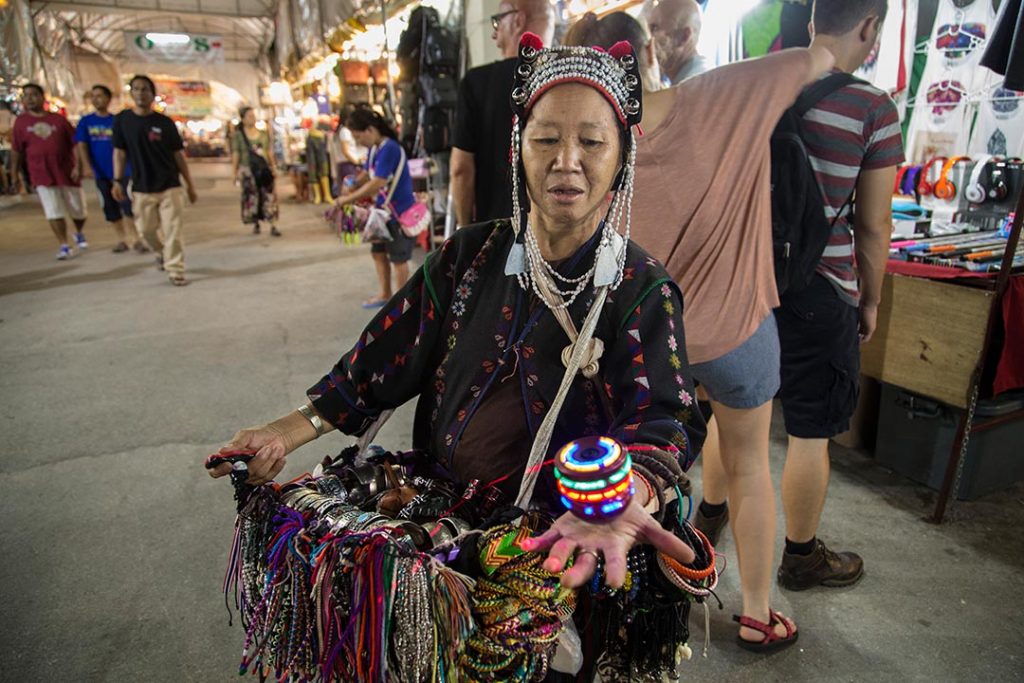 “Their parents work in the night markets,” Wanchai explains, referring to the many late-night, open-air markets aimed at tourists visiting Thailand. Residents of the city’s slums peddle handicrafts and cheap toys in these night markets, dressed in their traditional clothes to draw attention. “The parents don’t have time to watch the children at night, and the children will run off to the game parlours, sometimes spending days there.”

Most of the parents are illiterate and don’t understand the dangers their children face. They think their children are learning computer skills, not realizing the children are becoming hooked on online games or looking at inappropriate material. Parents also think the gaming parlours are a better alternative to their kids being on the street—joining gangs or getting addicted to methamphetamines.

Without an understanding of the dangers that their children face at the parlours, parents are often at a loss when they learn their children have entered the sex trade.

“And once he’s in there, it’s almost impossible for us to bring a young boy out of it,” says Wanchai, through tears.

“But we don’t wait for them to get to that point,” Mr. Wanchai says. “We want to get to them before they’ve entered the sex trade or are addicted to computer games. We have to draw them into our community.” 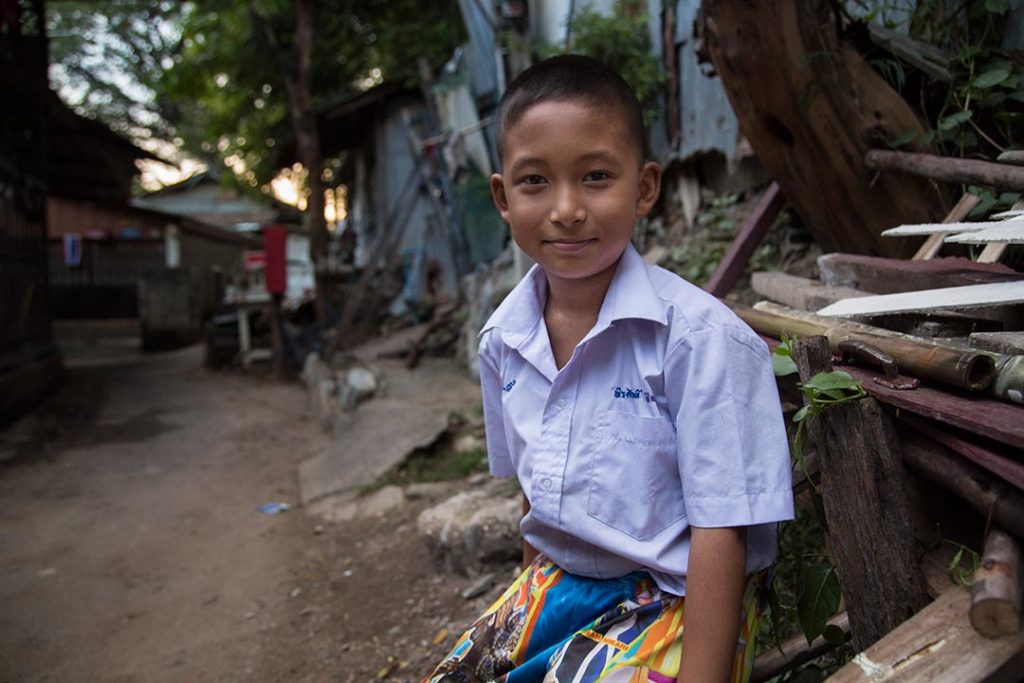 At first, the church tried to get the children to come to Sunday school. But the struggle to get rowdy young boys unaccustomed to adult supervision to sit still and listen to Sunday school lessons was in vain. “We tried that,” says Wanchai, “But it didn’t work. After a while, the boys just didn’t want to come at all to the church.”

That’s when they changed their strategy. In 2013, the church started a soccer ministry to children in the slum. They invited all the boys from the slum to join a soccer team at the church where they would learn to play. The opportunity to be coached by a real soccer coach, a volunteer from the church, was a big draw. The program grew quickly, and so did costs.

But at this time, Compassion began to partner with the Acts of Grace Church to join in its mission to help children in poverty. Through Compassion’s partnership, they were able to hire a coach and purchase equipment and clothing for the children. 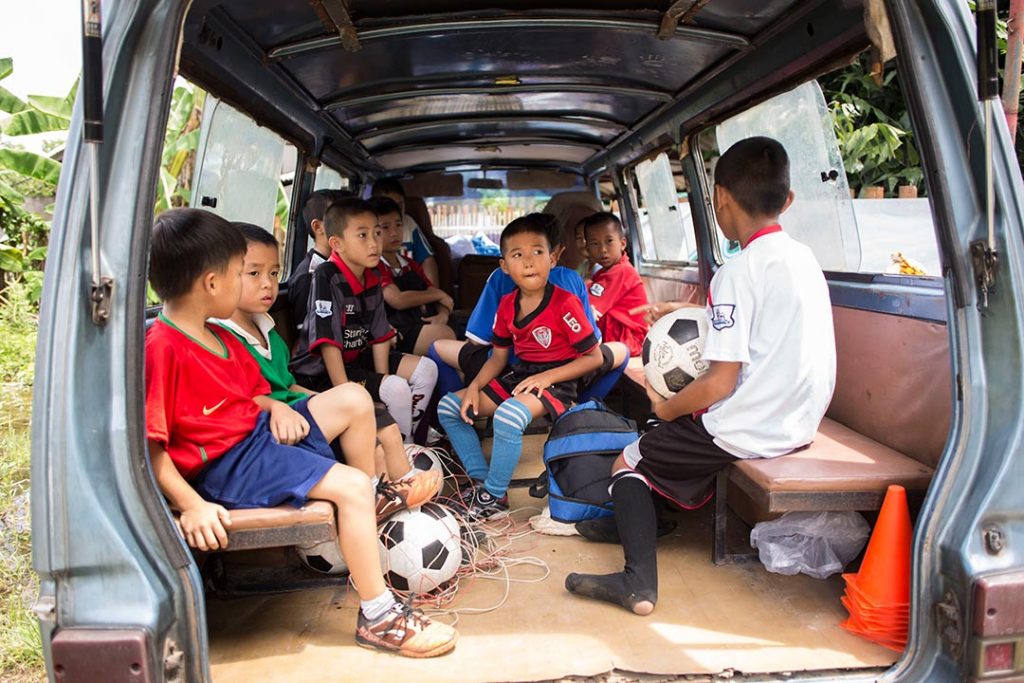 “After we joined with Compassion, we were able to increase our reach to 30 children and counting!” says Wanchai.

Almost every young boy in the slum is now enrolled in the soccer program. In the program, boys are not only given an alternative to the dangerous gaming parlours, but are taught in so many other ways. Children who had no good male role models to look up to, often suffering abuse from their own fathers, now look up to the coach and trainers from the church as role models and examples to follow. The men leading the program are not only church members, but also compassionate, skilled coaches and trainers who have a heart for mentoring these children.

One of these men is Phithack Phaodee, the head coach. He has used his personal connections to let the boys occasionally practice on a professional practice field at a local soccer club. His fun, but firm, practice sessions are orderly and disciplined, and it’s clear that the boys look up to him with great respect. 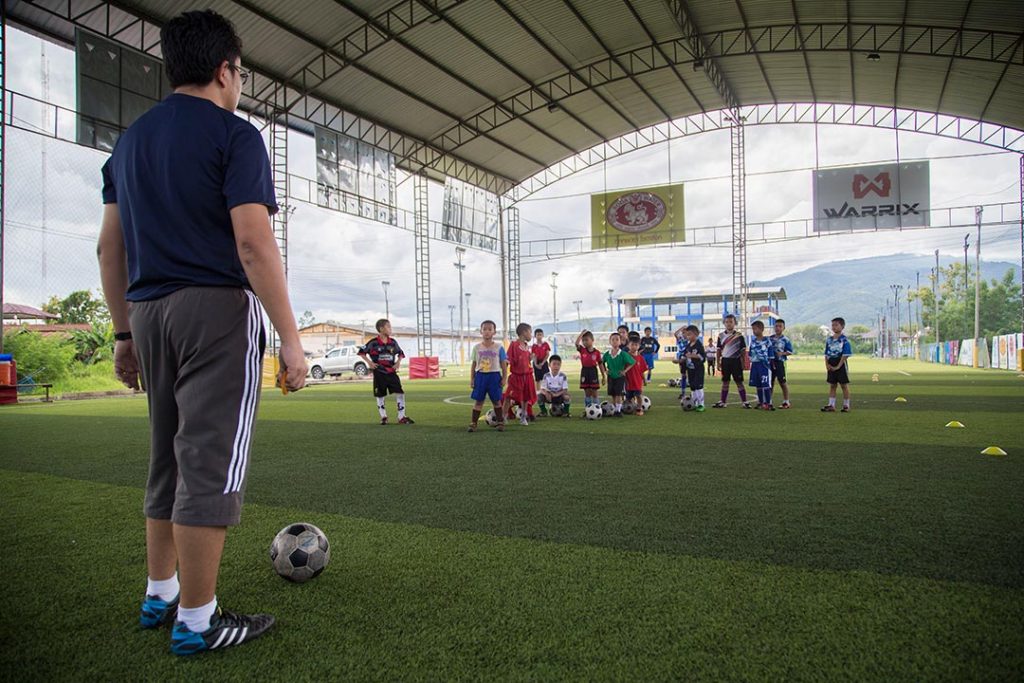 And what do the parents think about the soccer program? “Parents have told me,” says Mr. Wanchai, “that in the past, when they had to go work, the children would go missing all night. Now, because they’re so tired from soccer practice, they sleep instead! So the children stay home, and are well rested for school the next morning. They are very happy about that!”

What’s more, to date, not a single boy who has enrolled in the Acts of Grace Church soccer program has entered the sex trade. Mr. Wanchai calls it “automatic protection”: simply registering a child with Compassion and entering him in the soccer program keeps him out of the hands of recruiters. What’s more, according to Wanchai, “Already, two or three children have come to believe in Jesus through this program!”

Children are staying home at night, sleeping well, eating better, and have good male role models in their lives. The church is expanding their ministry too. Because the soccer team was so effective for boys, they have started a volleyball team for girls to protect them from the sex trade recruiters. 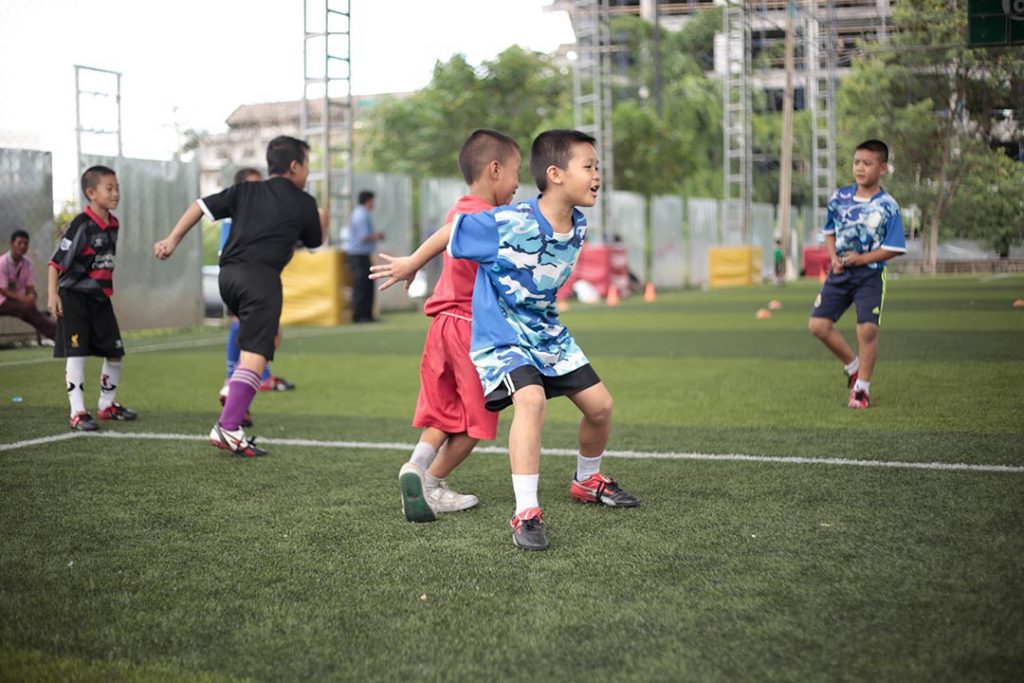 And what of the sex trade recruiters? Mr. Wanchai hasn’t seen them coming around the slum at all this year. “Apparently, the boys are too busy with soccer,” he says. After cutting off the supply, recruiters have stopped coming to the Kampang Ngam area, and a vicious cycle of entrapment is being stopped.

Compassion’s mission of releasing children from poverty is often achieved best by prevention. In this case, preventive actions by the church in a dark and dangerous world have kept children out of a life of prostitution. After trading late night game parlours for sunshine on a soccer field, children are seeing hope for the first time. As they continue through Compassion’s program, they will learn to achieve goals beyond the soccer field, goals that will lead to a life free from poverty.