Before God ordained the Church, He ordained the family. God’s perfect will is for families to be a safe place where children grow in an atmosphere of joy and peace as they experience His Love through their parents and learn how to love others too.

And children learn through play. Play is the language of a child. It’s what transforms all that we teach them into what they come to know by heart.  As a homeschool mum, I have seen this firsthand. I have come to know that play is not to be downplayed. Play is a powerful tool that kindles a child’s curiosity, imagination, inspiration and creativity. With many pretend plays under my belt, I deeply treasure how play continues to cultivate trust, friendship and fun between my daughter and I.

So, Jesus instructs, “Let the little children come to me, and do not hinder them, for the kingdom of heaven belongs to such as these.” (Matthew 19:14).

We are called to remove every obstacle, every stumbling block and release every child to come – play and all. Let them come and grow unhindered in the presence of Jesus, whether within families or within the walls of the church. Let them come.

This is why here at Compassion Canada, we continue to partner with the local churches, where we serve, to fulfil their mission of loving and caring for the most vulnerable children and families.

So, as we celebrate Family Day here in Canada this February, join us to celebrate the many ways that children in Africa have used traditions of games and play to draw towards one another in friendships, hope and joy. These games and play are as old as the countries where they are played and loved and enjoyed alike from generation to generation.

“How good and pleasant it is when God’s people live together in unity!” – Psalm 133:1 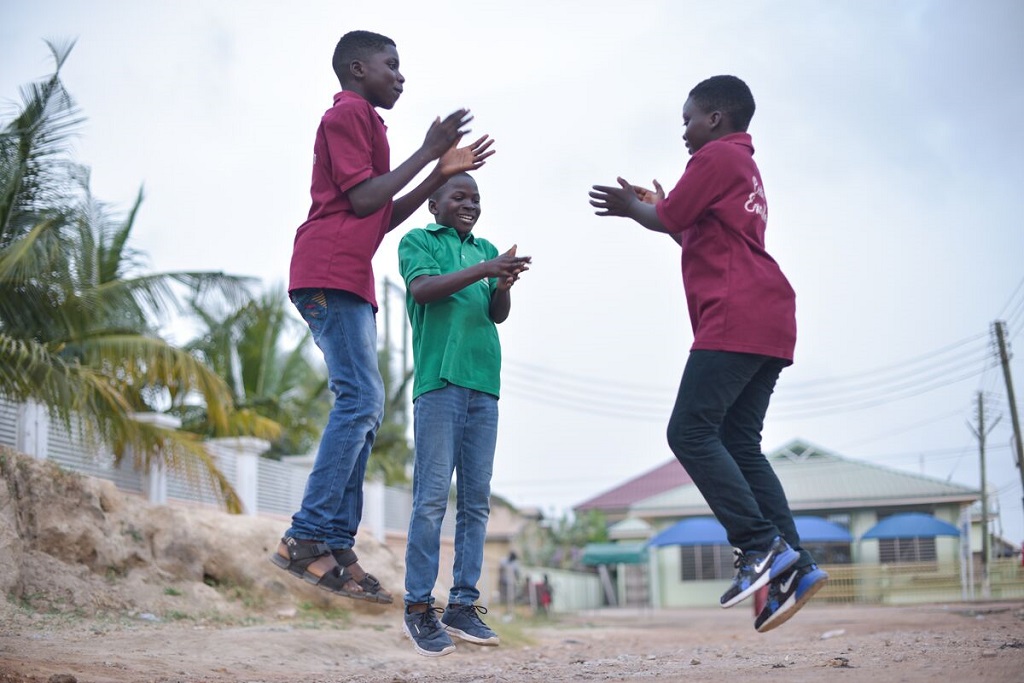 Ampe is a favorite Ghanaian game. It’s arguably the most common children’s game in the country, played across the length and breadth of Ghana. While other games are specific to certain ethnicities within Ghana, Ampe is played by children all over the country regardless of their tribe. 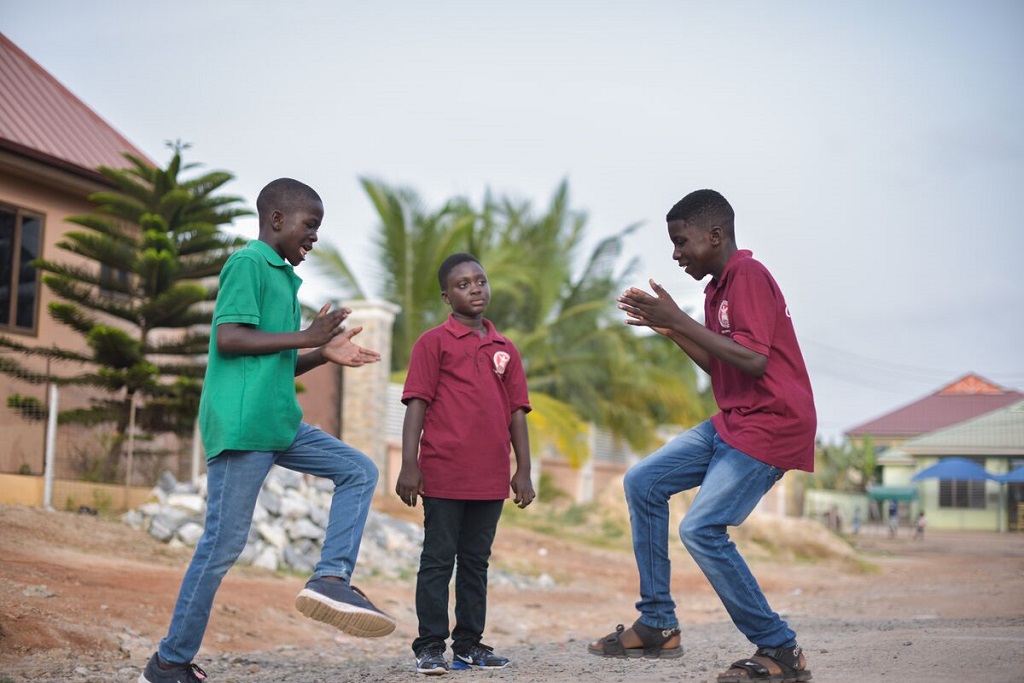 It’s a very simple game which consists of a mixture of hand and feet movements. Ampe is played between two teams: ‘Ostraite’ (pronounced oh-straight-ay) and ‘Okɔntɔ’ (pronounced oh-kon-tor). These translate simply as ‘same’ and ‘different’ respectively.

The teams arrange themselves in a single file facing each other with the first person from each team called the ‘mother’. The mothers start by playing each other. They each get one go. You win the round depending on which foot you put forward at the end. If you both put forth the same foot, then a point goes to team ‘Ostraite’. If you both put forth different feet, the point goes to ‘Okɔntɔ’. 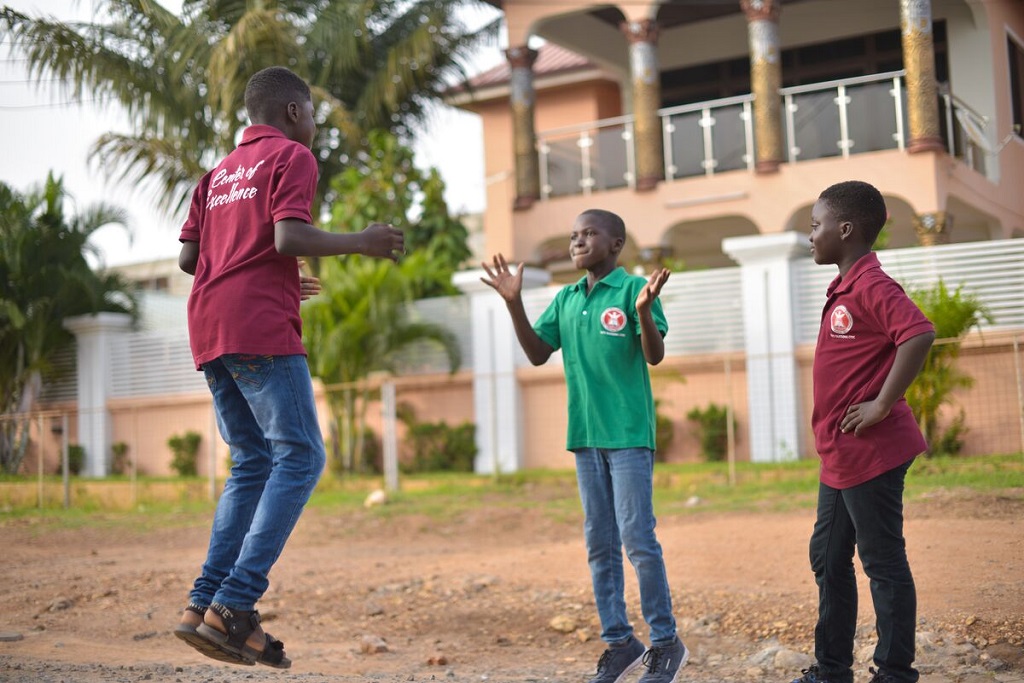 The game can go on for as long as both teams like. 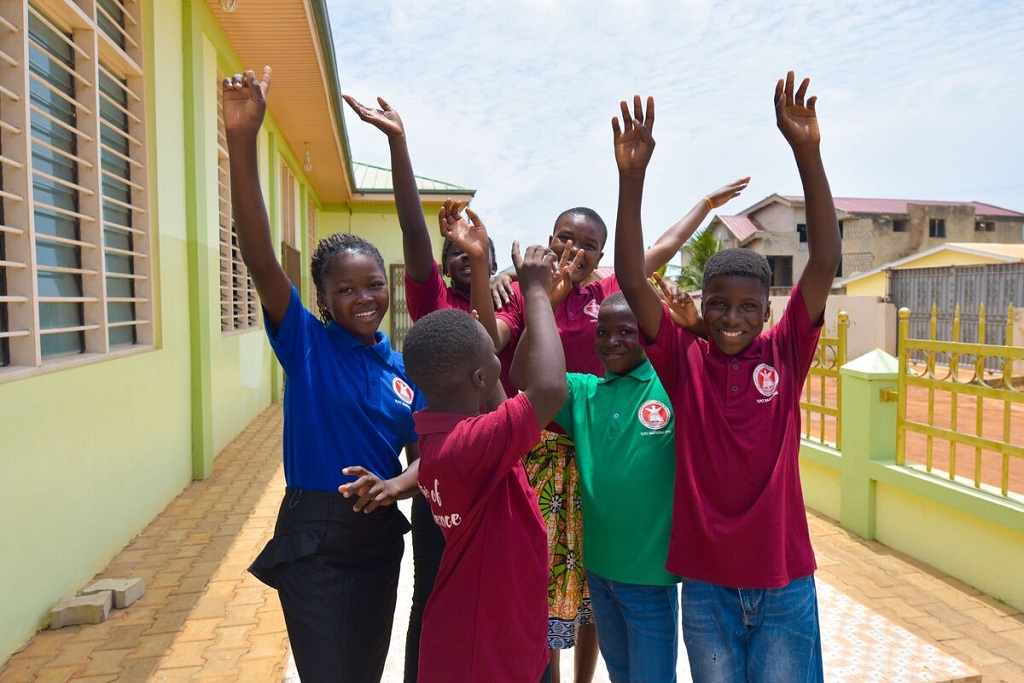 Ampe used to be known as a game for girls, back in the day. During break times at school, the girls will gather to play Ampe while the boys go off to play football. This distinction was so strong that boys who played Ampe were ridiculed by their friends. However, as the years passed it has become culturally acceptable for Ampe to be played by both girls and boys alike. In fact, the most interesting games perhaps are boys versus girls Ampe matches. It’s a game loved by all. 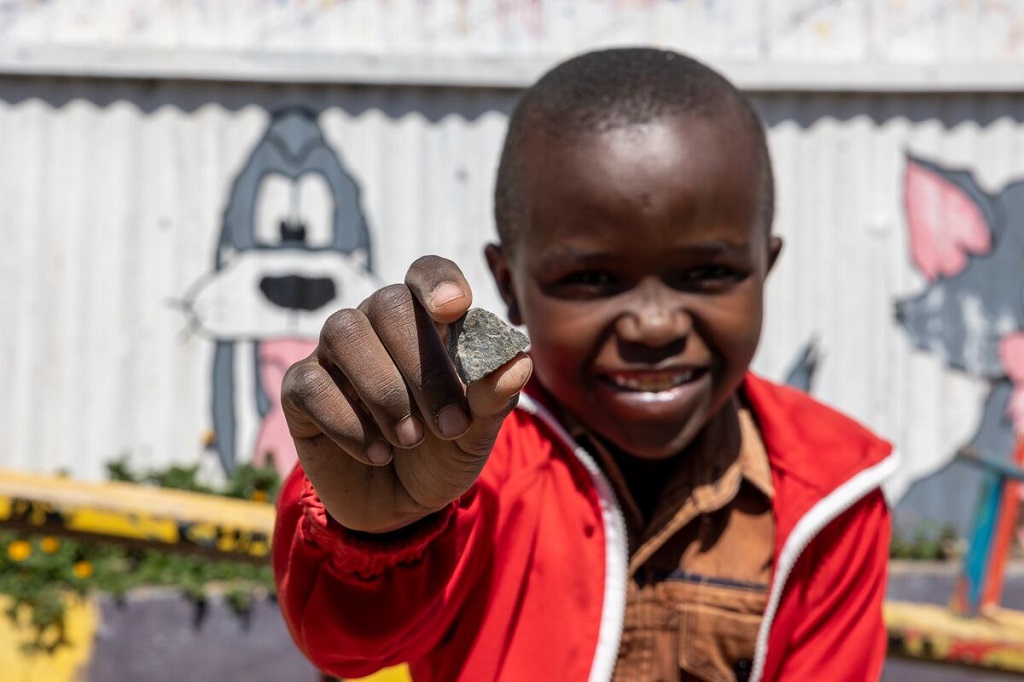 Huddled in a corner of the field is a group of boys and girls. Between them, a game is going on. Small shallow holes with pebbles inside them have been made on the ground. “We call the game kigogo,” says Mwadalu, one of the boys. 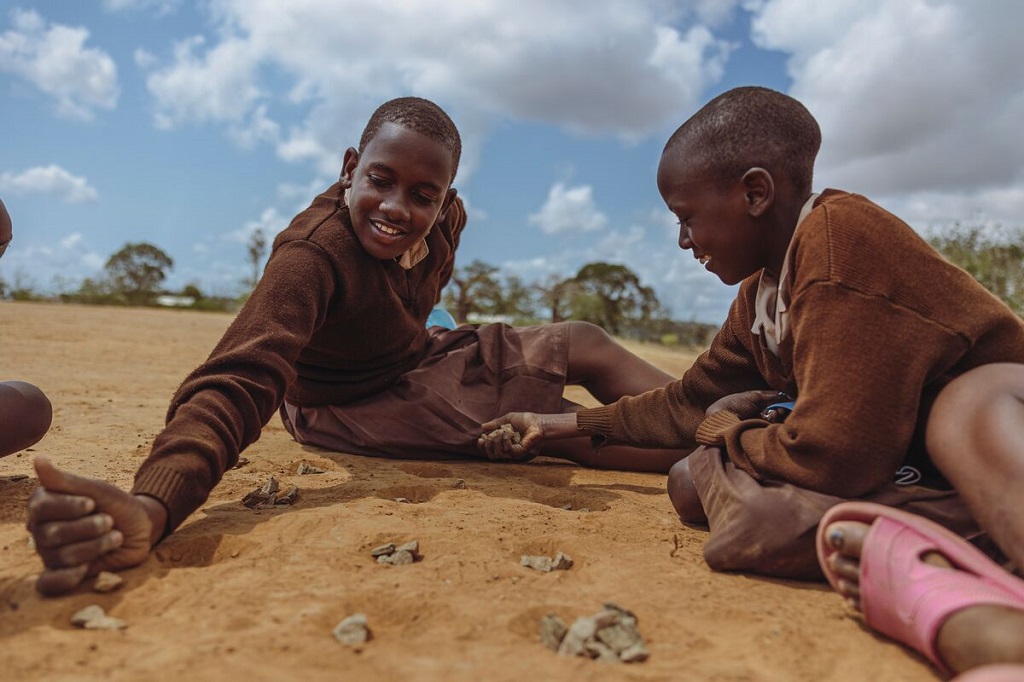 In kigogo, each player initially places six ‘seeds’ in the ‘house’ (the fourth rightmost pit in the inner row of each half board) and two more seeds in the two pits immediately to the right. All the remaining seeds are kept in hand. 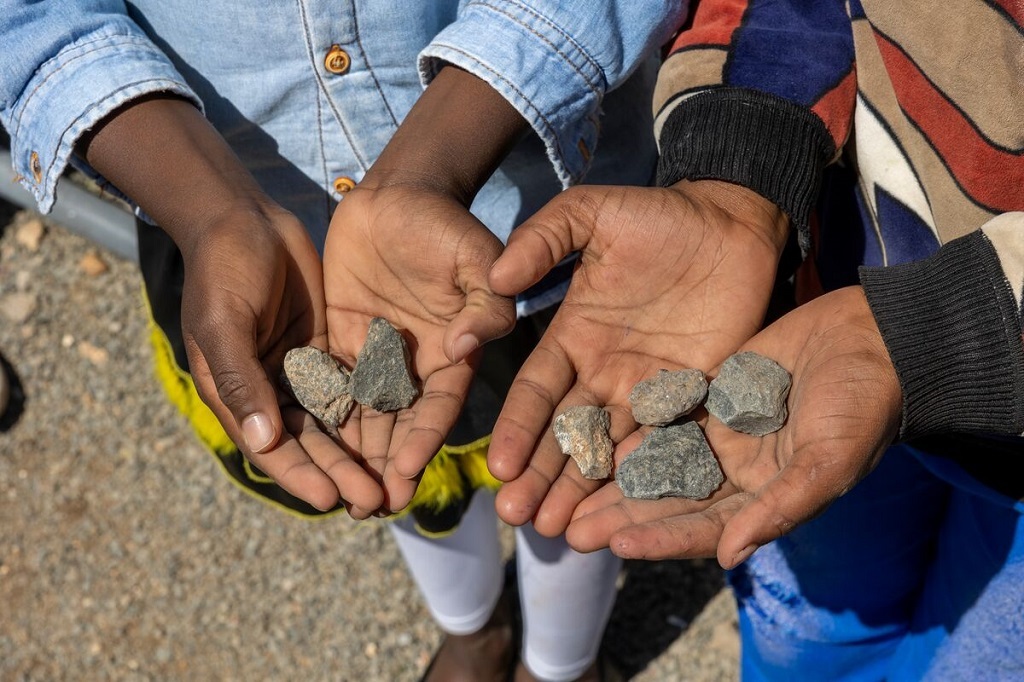 Kigogo comprises four rows of four pits each. In Swahili, holes are termed mashimo (singular: shimo.) Each player owns half of the board comprising two adjacent rows. Some pits that play a special role in the game have specific names.

As the game goes on, there is a mix of tense silence and shouts of joy when one wins. “The fun in the game is collecting all your competitor’s pebbles,” says Winnie, 11. The game ends when a player is left without pebbles in his or her inner row, or when he or she cannot move anymore. In both cases, this player loses the game. 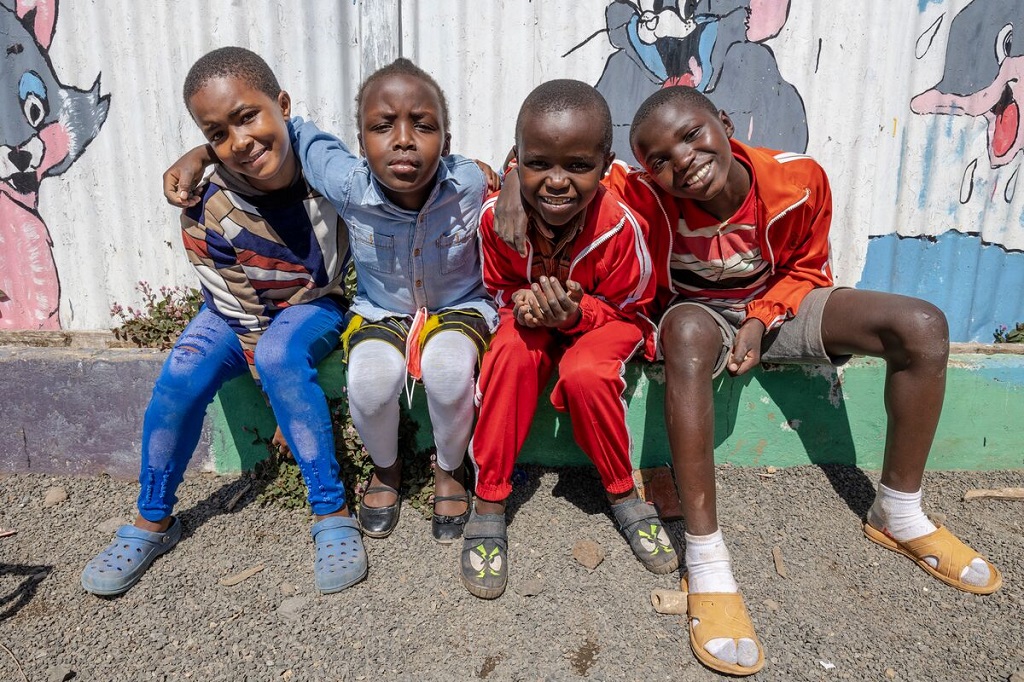 Traditionally, the game would be played by girls but lately, boys have come to enjoy the game too. Kigogo is a traditional game played in various countries across Africa—Kenya, Tanzania, Comoros, Malawi as well as DR Congo, and Burundi. The game is the most popular among the Swahili people of Tanzania and Kenya, where it goes by the name bao in Swahili. 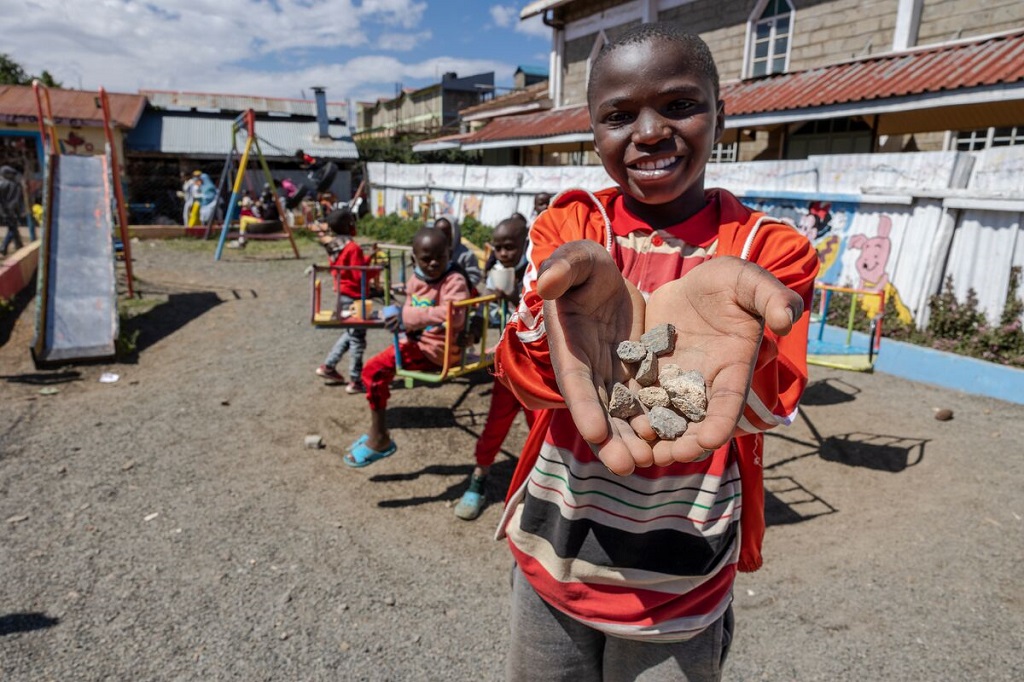 Games like Kigogo have been passed down for generations. Grandparents continue to play a primary role in teaching the children the game, so that another generation gets to preserve the enjoyable traditional activity.

Learn to make a homemade toy with children in Uganda! 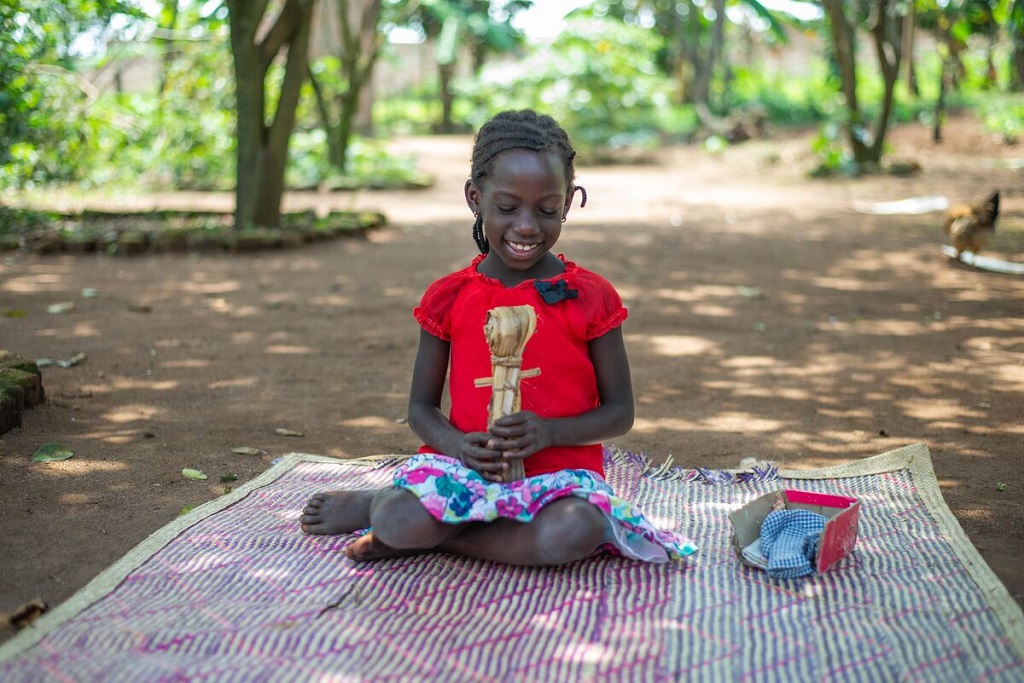 Six-year-old Esther is a twin and lives with her mother and grandmother, grandfather, nieces and nephews. Due to the COVID-19 pandemic, she couldn’t play with her friends at home and at the centre. And because her parents couldn’t afford toys for her to play with, Esther had to learn how to make her own doll from centre staff member Elizabeth, using dried banana fibers. Staff taught the parents and children the importance of play and taught them how to make dolls locally. 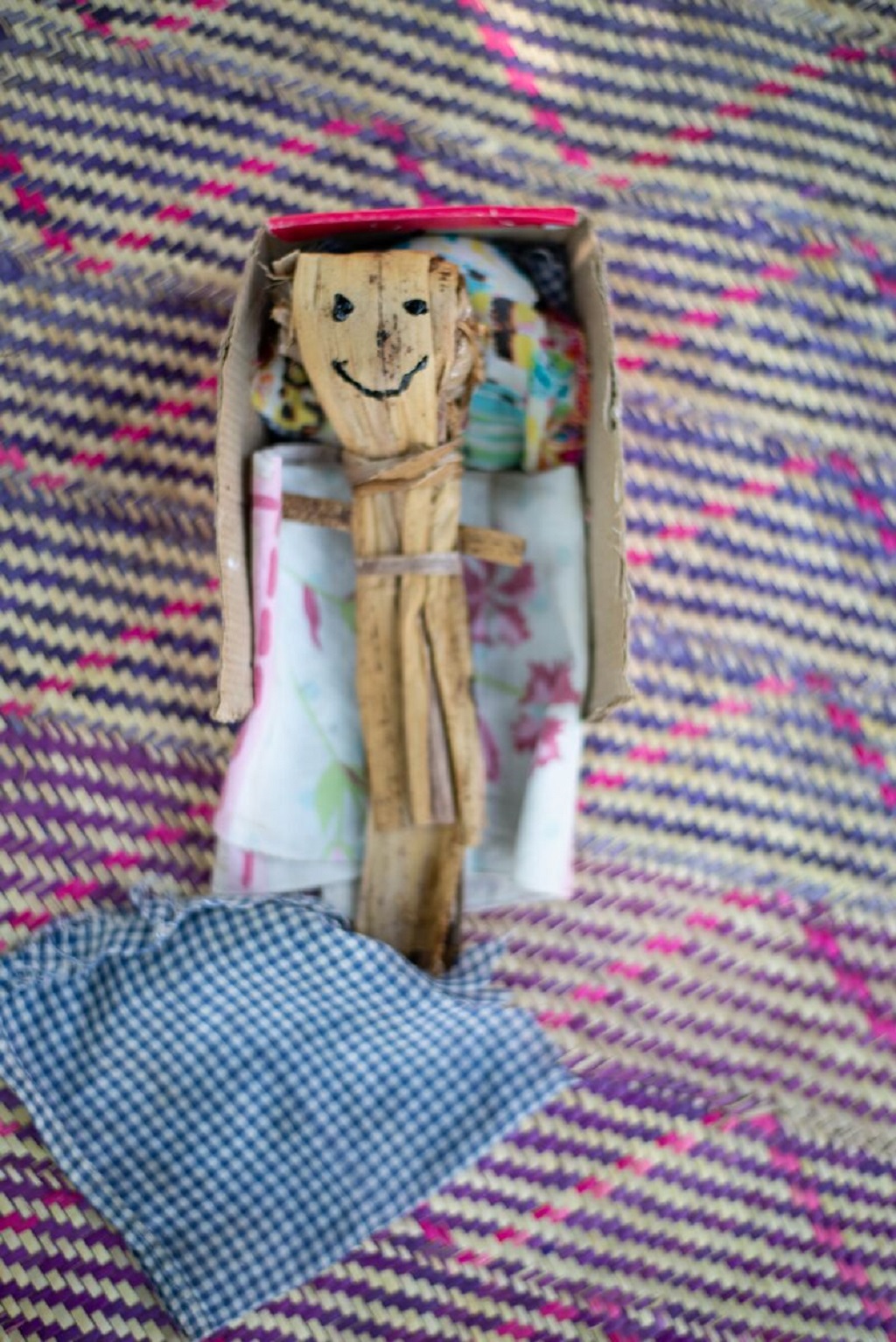 The local doll is made from dried banana fibers. All Esther does is roll one piece of banana fiber into a ball to create the head of the doll. While holding the ball of fiber in one hand, she places the second fiber on top of it. The second fiber hangs over the ball. She keeps adding fibers until she achieves the size of doll she desires. 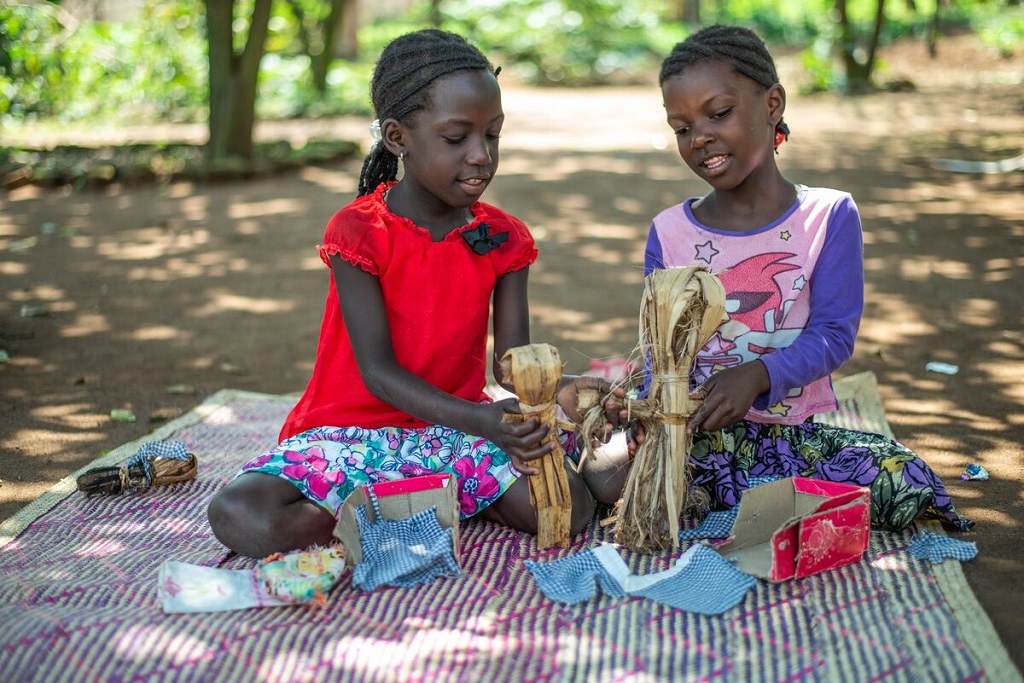 After this, Esther uses a thin piece of fiber to tie a knot below the head of the ball. The last stage is to make the hands using two shorter pieces of fiber. She ties them together and twists them to create hands. She then parts the hanging fiber on the doll and places the hands right in the middle of the fiber horizontally towards the neck of the doll. She then ties a thin piece of fiber below the hands and with that, her doll is complete. It takes Esther only seven minutes to make a new doll.

Even though the pandemic has isolated people, children in Uganda are still able to play and have fun at home as they wait for their lives to go back to normal again. 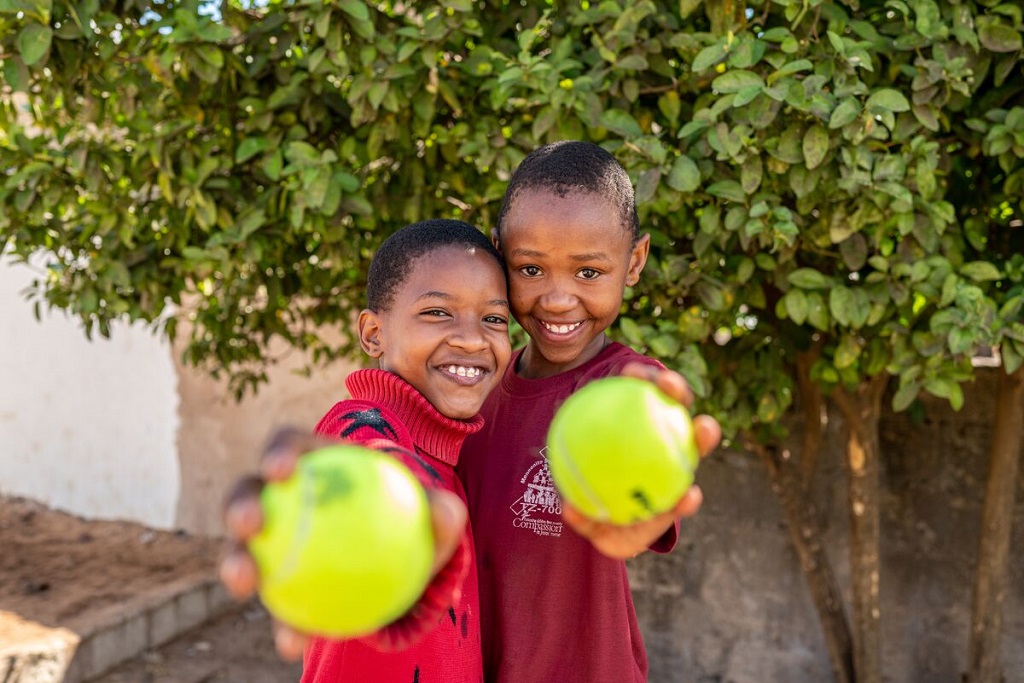 Kitenesi is a game that girls in their early teens play to showcase their dribbling skills with a tennis ball. The rules vary depending on the number of players. 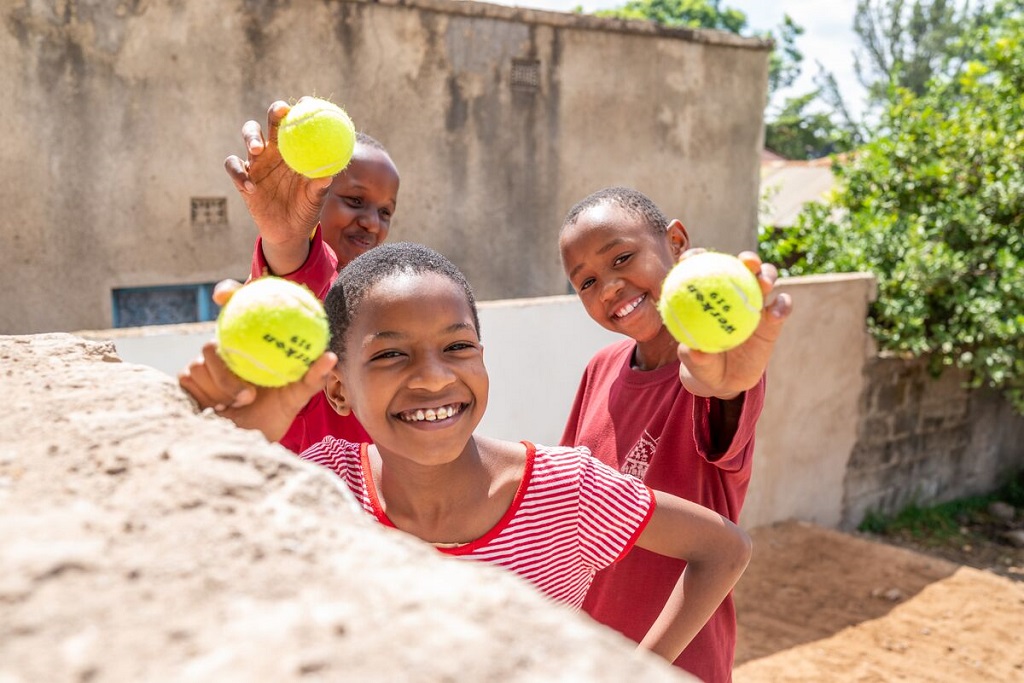 When played by three people, one player stands in the middle of two players. The challenge is for them to alternately jump and dodge the bouncing ball. When it is played by a single player, it becomes a freestyle dribbling competition: whoever misses a dribble hands the ball to the next player.

“The good thing about kitenesi is that, unlike most games that our children play, it does not require a lot of space. All the girls need to enjoy the game is a ball and a hard floor.” said Gift, the centre’s social worker.

The girls at the centre love the game because it gives them a chance to make new friends and have lots of fun! 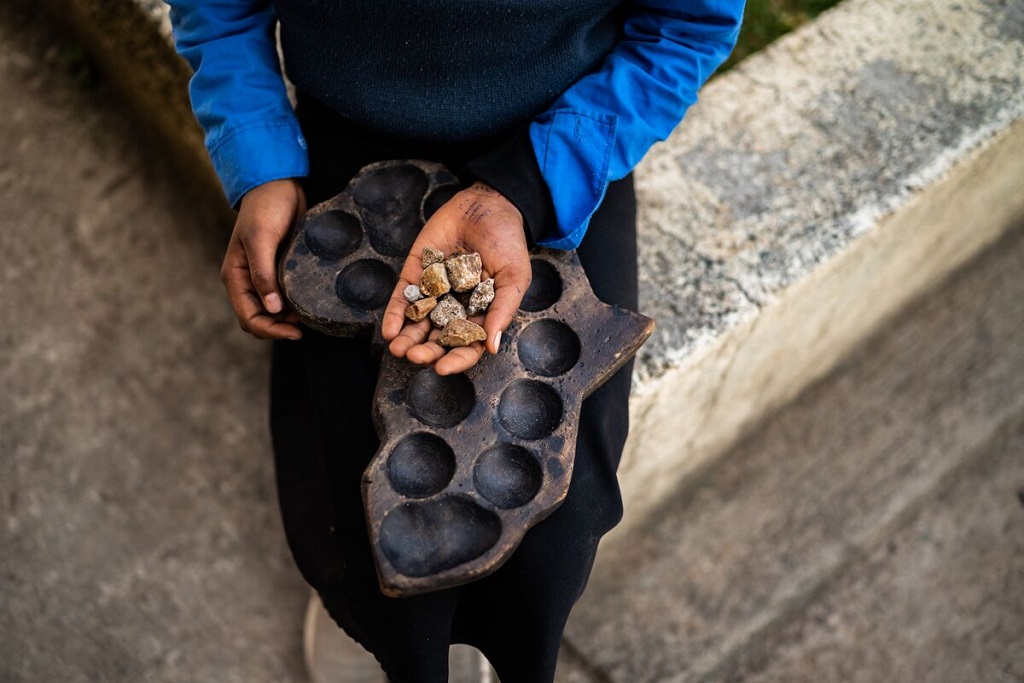 Gebet’a is one of the oldest board games in Ethiopia. Until recently, the game was played by both adults and children in public areas, although now it is increasingly being replaced by modern games and electronic devices. However, the centre staff and a volunteer at Assella Lutheran Church have made it their mission to pass on the tradition and make this old game popular with the children registered at the centre. 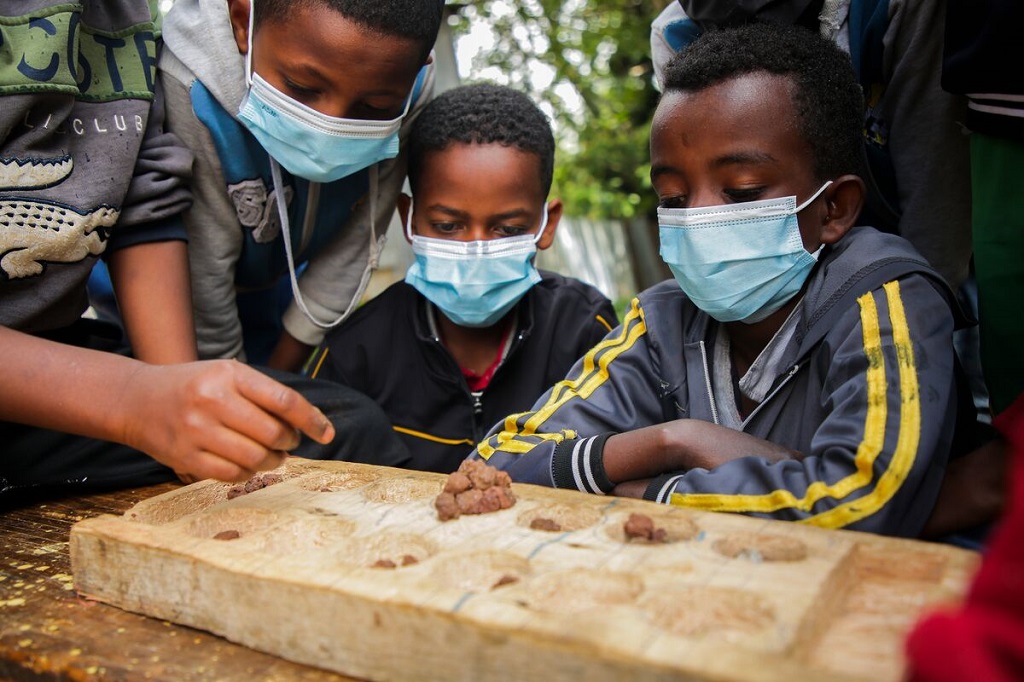 Gebet’a was introduced to the children because of its cultural significance, as a way of transferring the heritage to the younger generation. It was also meant to give them a new experience and a sense of adventure. According to Te’amer, who crafted the Gebet’a board from wood himself, the children quickly grasped the rules of the game and mastered it when he taught them how to play. 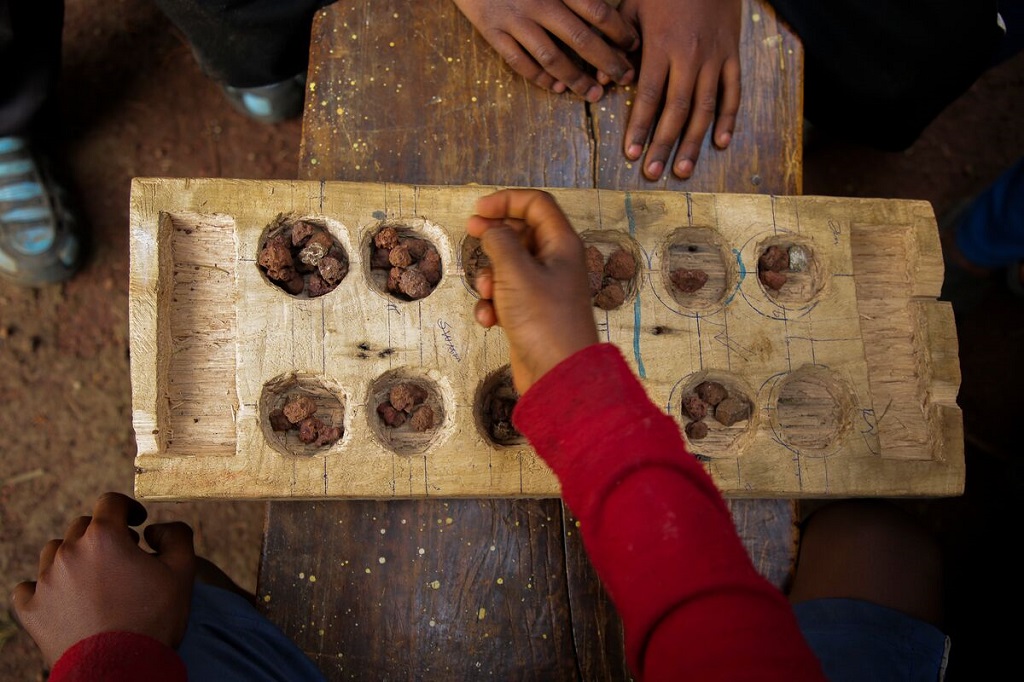 The board, which has twelve holes arranged in rows of two, is usually constructed from wood. In some cases, it is even played using holes dug in the ground. The pieces of seeds, stones, or beans are moved about the holes during play. The big holes at the end of the board store the captured stones. The main objective of the game is to win more stones than your opponent. 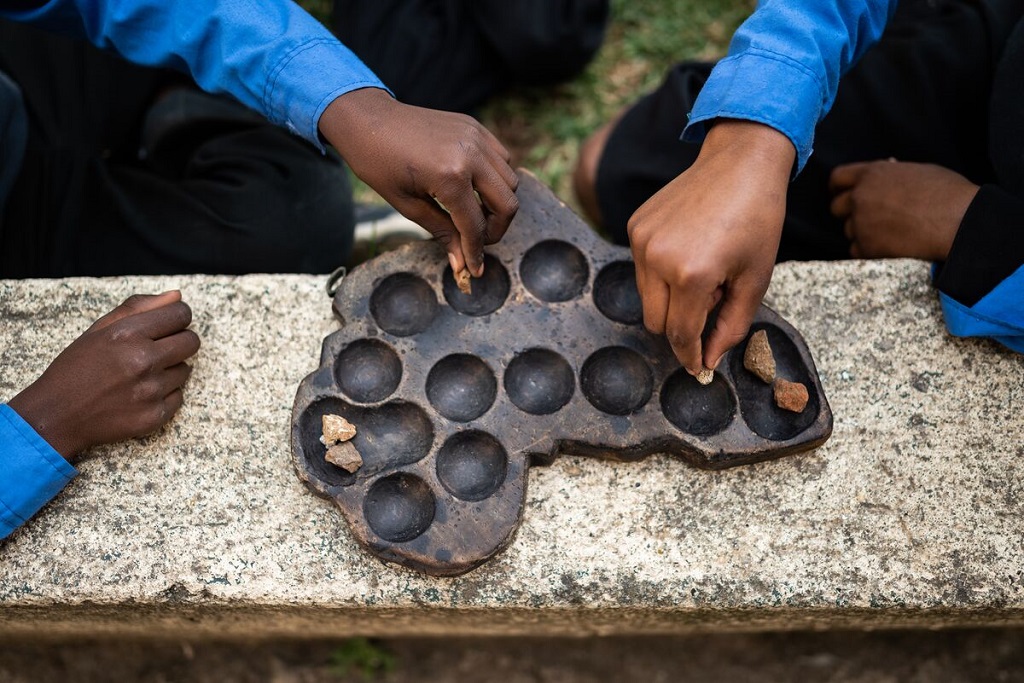 The game begins when the two players have filled all the holes with four pieces of stones each. The players control their side of the board. At the beginning of a player’s turn, a hole containing stones is selected, after which the player starts dropping all the stones from their selected hole one at a time into successive holes, in a motion covering the board. If the last stone at hand drops in a hole with stones, all the stones in that particular hole are seized by the player. The process will continue until the dropping of the stones ends in an empty hole adjacent to an opponent’s hole that contains one or more stones. 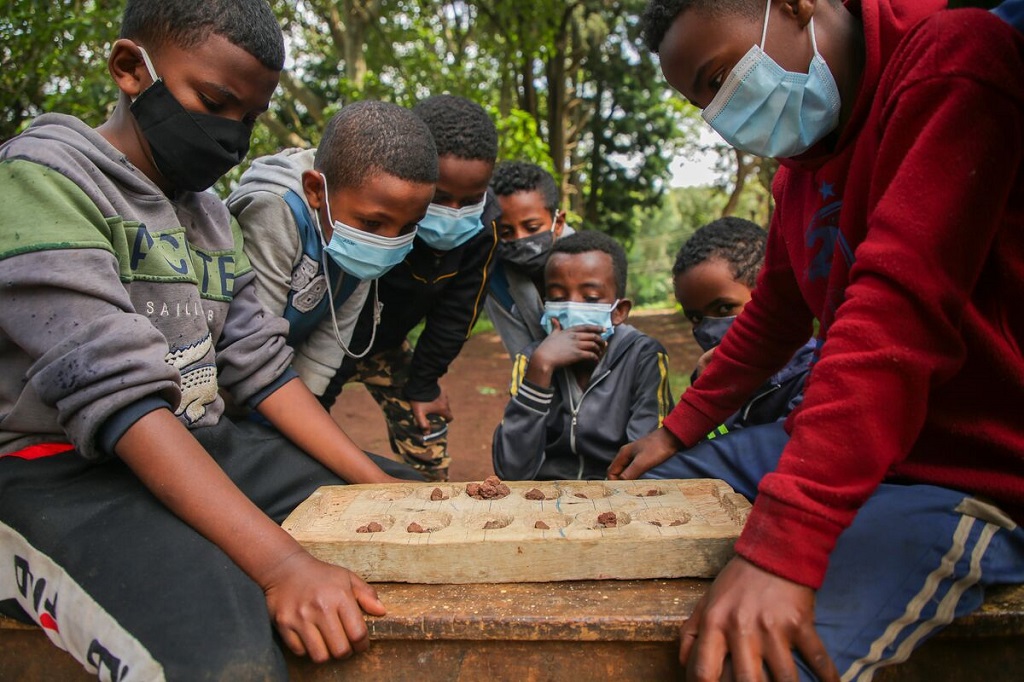 Children take turns enjoying the game both as players and spectators. They play for hours and hours on end, siting by the shade on the wooden bench near the centre office or under the big trees in the church compound.

“Children come to the centre every day. They love to play in groups. We encourage them to try new games and play together. Even though Gebet’a was new for them, they were curious and eager to be trained. Now it’s their most preferred game.” — Te’amer, centre volunteer.

Could it be that in all that play and youthful joy Jesus finds a heart of faith so trusting that it’ll throw itself into His arms with reckless abandon? A childlike wonder that’ll find hope and joy in play and games and the simplest things of life. A childlike heart that’ll love and build friendships with no motives. That childlike faith that will ask God for the world and never doubt His ability to give it. There’s little wonder why Jesus instructs us to observe the little children and be like them, for truly it is with such carefree trust and meekness that we inherit the Kingdom of God.

Rayo Adegoke is a Content Specialist at Compassion Canada. She is deeply passionate about telling stories that testify of God's goodness. Between read alouds, sing alouds, cutting crusts off sandwiches and playing hide and seek with her daughter, she loves to bake with her husband.