On a winding path in the hills of Costa Rica, eleven sets of bicycle tires carved tracks in the ground while tropical birds called overhead. The landscape constantly changed from mist-covered mountains to lush green jungles, craggy hillsides to open fields. But the challenging terrain was only half the motivation for these cyclists from western Canada.

What kept them going were the students they were riding for.

It started simply for trip organizer Dennis Dick, relatively new to cycling. Inspired by a magazine article on adventure vacations, he began sharing his idea to cycle across an unknown country with his wife, Bunny. But an offhand comment from his pastor changed his idea to something greater.

“I was at a charity fundraiser,” he says. “And my pastor, who knew I was into adventures, said, ‘Have you ever thought of doing a vacation with a purpose?'” That’s when things changed for Dennis—and the ten others who would eventually join him in cycling across Costa Rica.

Marilyn Hari and her husband have known the Dicks for years, so joining the team was only natural. “We were talking about this point in our life and how we can travel because our kids are gone. But [travelling] is always just about us, so when Dennis came up with the idea to fundraise at the same time, it was the perfect combination.”

John Derksen, on the other hand, was a last minute addition. Signing up just two weeks before boarding the plane, he hardly had time to mentally prepare. “The challenge of the trip itself was more than I expected,” he says. “But I enjoyed it—both the physical aspect and the camaraderie of the group. We seemed to gel right off the bat; everyone was really committed. Some of the days were pretty taxing, yet people were so positive.”

Though challenging, the eight-day course was stunning. Costa Rica boasts over 9,000 different plants and well over 800 species of birds. Howler monkeys swung from branches overhead, and sloths hung lazily in the treetops. Plantations spread out over the lowlands, giving a stunning view of distant mountain ranges. 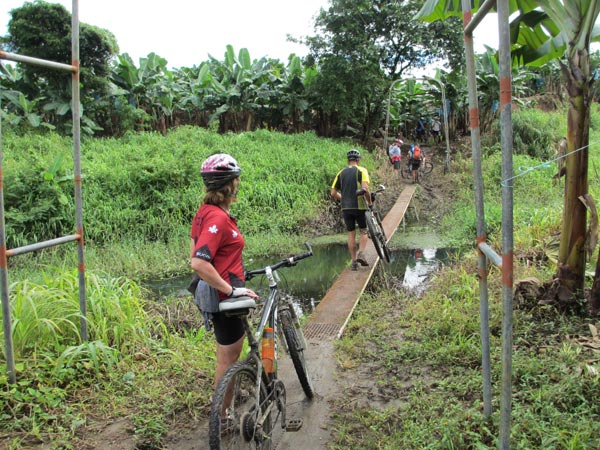 The team kept their purpose for riding always before them. Each morning, Dennis introduced a student in the Leadership Development Program. He read their story, what they were studying, and their aspirations for the future. Putting a face to their purpose motivated the team to put the kilometres behind them.

“They said things like, ‘I really want to help the people in my community just like Christ has helped me’ and for me, that pulled it together,” says John. Each rider also received a student’s profile on a laminated card to clip to their bike handles. “If we were going through a challenge or frustration, we could go back to that picture and realize that we were going to be able to help these students out—and we learned to persevere.

“Each one of us faced challenges we had never faced before,” says Dennis. “We had to go beyond our comfort zone, but we knew this experience would benefit others, and we knew we would grow from it.”

Donations poured in from family and friends, totaling $38,730. The funds will provide support and training for hundreds of students in El Salvador, Haiti, and the Dominican Republic. Dennis and the cyclists have been inspired to look differently at life. “Personally, this just whets my appetite to continue pursuing things with a purpose in my life. If I can help others through these experiences, it’s a win-win.”

Dear sponsor, your letters are a lifeline…with love, your sponsored child.