Blue is usually more our colour, but for the next several days, we’re “going orange”, along with many around the world, to stand for the Elimination of Violence Against Women. Follow @CompassionCA on social media to learn more about the issues. Read on to hear just a few stories of how Compassion is helping the church end violence against women. 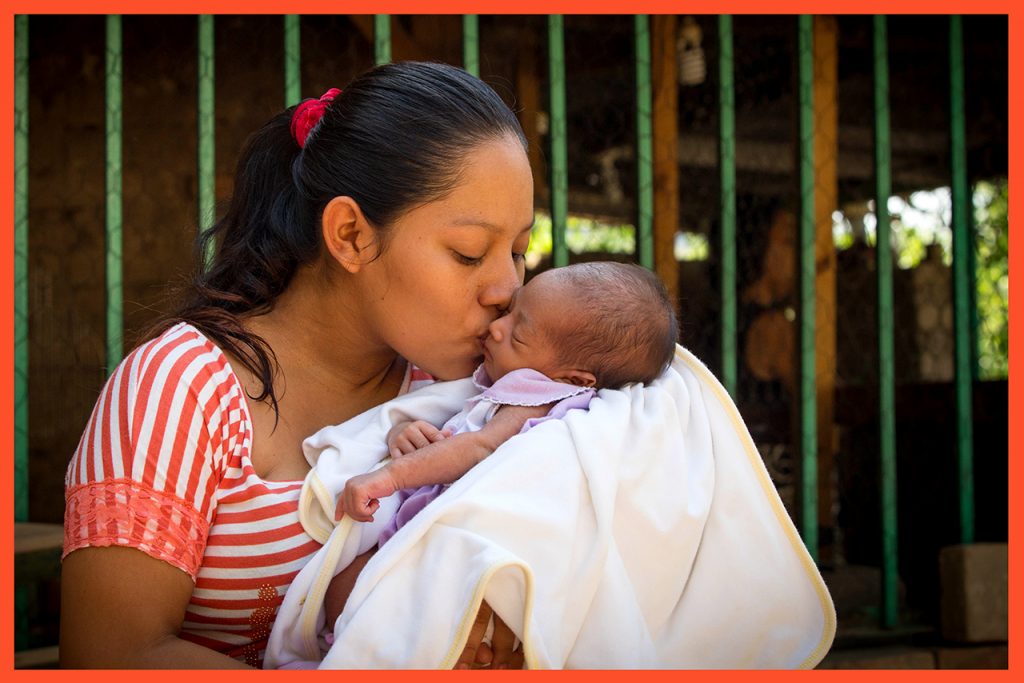 Taking a stand against child marriage

Lita* was devastated when she discovered her parents had arranged for her to marry an uncle. Marrying a relative often lowers the price of the bride’s dowry—something her father was desperate to do. Lita was already older than many of her peers were when they wed, and dowries can increase with the age and the education level of the bride.

Although illegal in many countries, child marriage remains a common cultural practice. In many circumstances, families are simply adhering to traditions their community has kept for generations. In others, poverty is a key motivator. Child marriage allows parents who struggle to make ends meet to give the financial responsibility of providing for their daughter to another.

The statistics are grim—but Compassion’s church partners are working hard to change them. 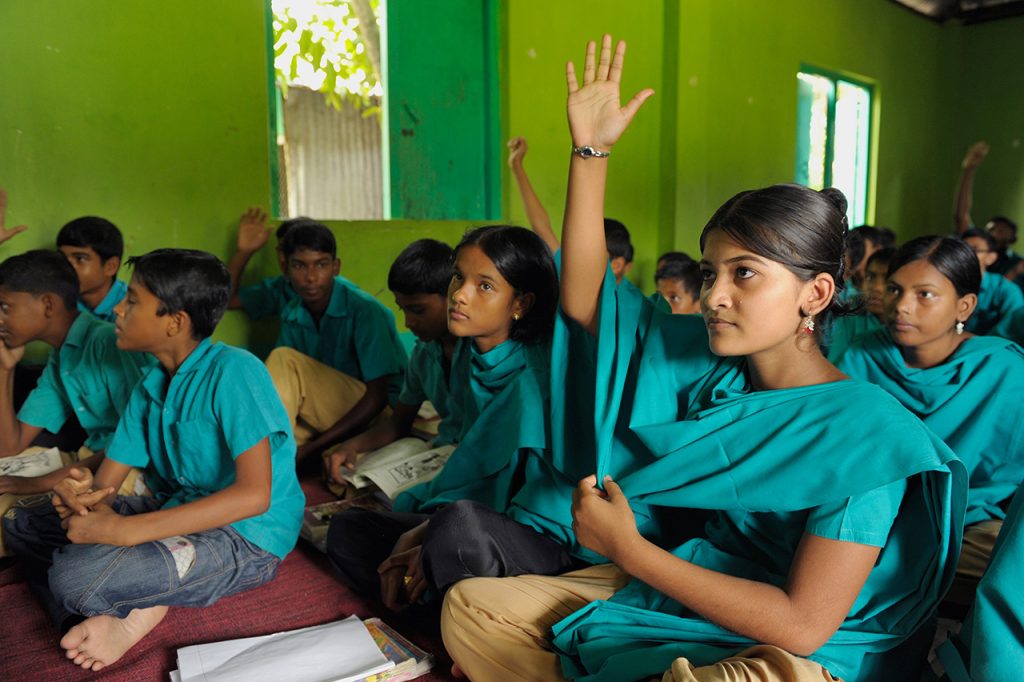 At Compassion centres around the world, girls like Lita are discovering their value as children of God and as young women. They’re learning the importance of education in providing opportunities and ending the cycle of poverty. They—along with their male peers—are learning about healthy relationships as well as personal health and development. And they are discovering that they do have a choice. 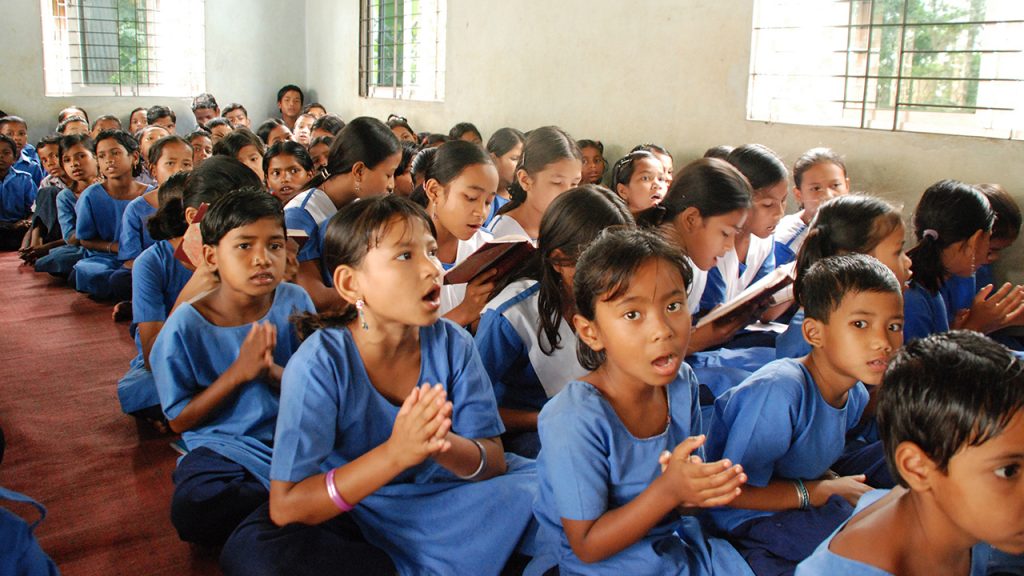 When Lita refused to marry, her father was furious. He brought her before the city council to force the issue, but Lita’s Compassion tutor, Ravi*, stood with her and advocated on her behalf. Although many community members were angry with Ravi for defying tradition, he refused to step down and eventually Lita’s parents relented. Lita’s relationship with them has been strained ever since, but she doesn’t regret her decision—her courage to take a stand inspired her younger sister to refuse an early marriage, too.

Lita is now taking Humanity studies and plans to work with marginalized children. She has also become a role model for young girls at her Compassion centre as they continue to pursue the plans God has for them.

Fourteen-year-old twin sisters, Lemayian and Nashipai*, live with their elder sister so they can be close to their Compassion centre. But two years ago, their parents asked that they come home in December to help with the maize harvest. When they arrived home, they were introduced to a visitor they didn’t expect—an elderly woman, rumoured to perform female genital mutilation (FGM) in the village.

Their mother told the girls the woman was simply there to visit. But when their mother insisted they shave their heads at the local market—something done during a rite of passage ceremony—the twins knew something was wrong. And they were terrified. 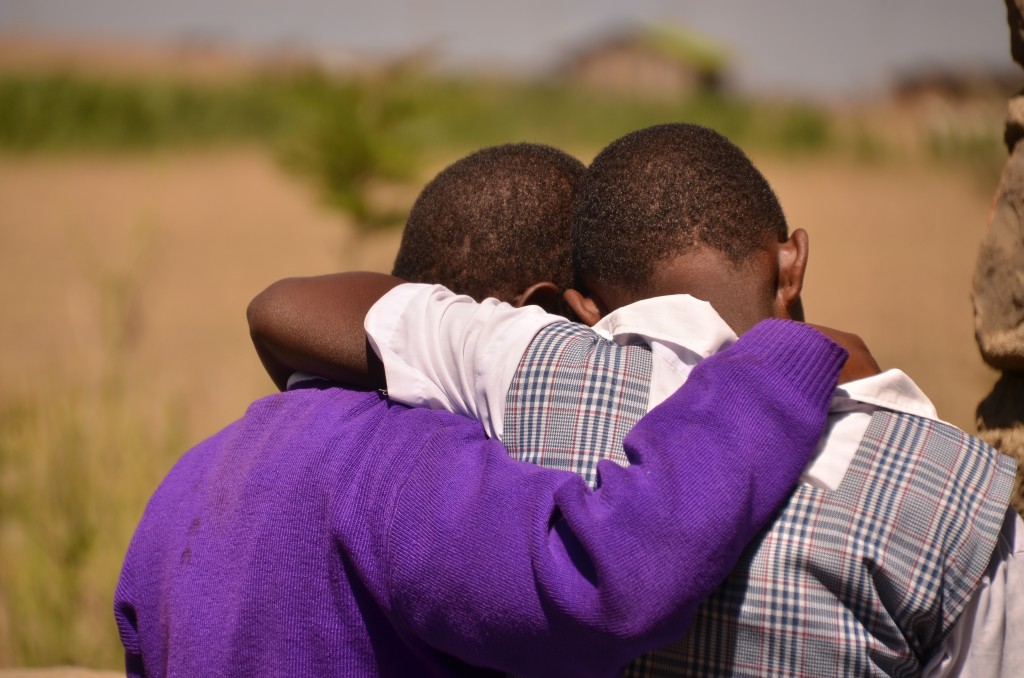 Female circumcision can result in birth complications and the spread of HIV and other sexually transmitted infections through the use of crude and unsterilized equipment during group rituals. In some instances, heavy bleeding has led to the death of young girls. Although FGM is illegal in Kenya, it’s difficult to prosecute the perpetrators because of cultural allegiance. Usually, the practice is done in private and under the cover of darkness.

The girls grew more anxious as night approached. Around 7 p.m., they snuck out of the house and hid behind a thicket near the home, praying, “Please, God, rescue us if it’s your will.” When all was clear, they made a run for it. The full moon lit their path while they ran, walked and dragged themselves for the next four hours before seeking refuge in a homestead. 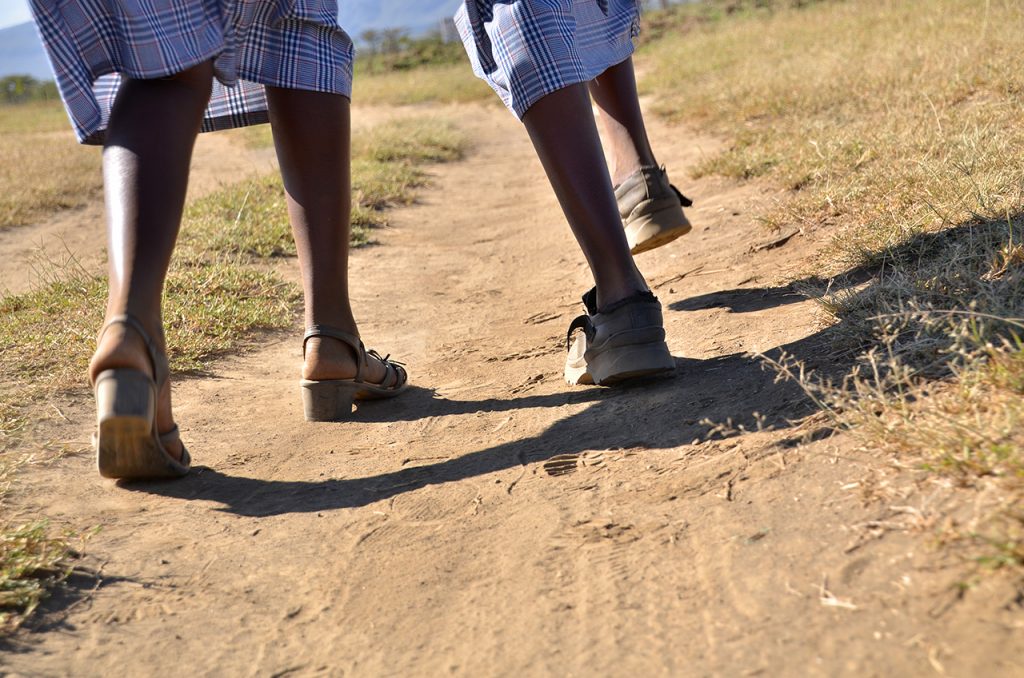 Before dawn, Lemayian and Nashipai thanked their hosts and walked another two hours to reach their Compassion centre. Rankoi*, the centre social worker, was surprised to see them. But when he learned what happened, he summoned the pastor, centre chairperson, village chief and several village elders, who discussed their next course of action. The girls’ parents were summoned. When they arrived, they were furious at their daughters. 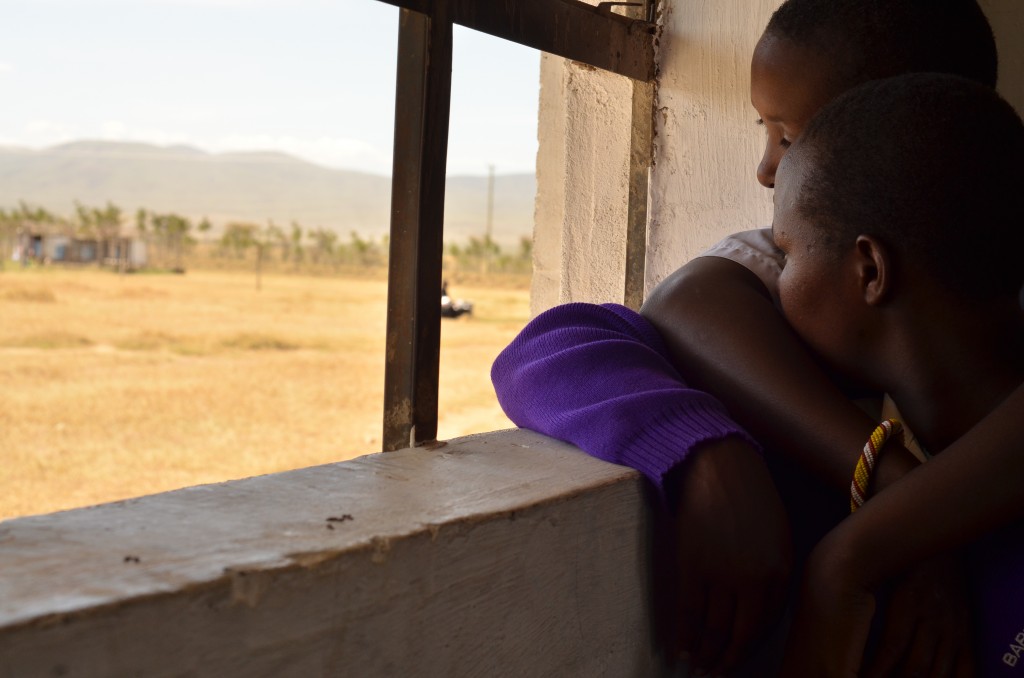 This isn’t the first time the church has rescued young girls from this practice. They also work hard to break harmful cultural practices through education. During school holidays in August and December, when FGM is usually performed in the village, registered children between the ages of 10 to 12 are taken through week-long trainings that helps them understand their sexuality and their rights as children.

“We engage several agencies, governmental and non-governmental, in educating our children to choose better health practices,” says Rankoi. “As a result, we have documented a significant drop in the number of children at the centre who have gone through FGM. Almost all unsponsored girls in that age group in this village will go through FGM, compared to approximately 25% who attend the centre.”

“We have three friends in school who went through FGM and got married at the age of 12. They now have two children each at the age of 14. We are sad for them, because they can’t continue with school, and they will probably not achieve their dreams,” says Lemayian. 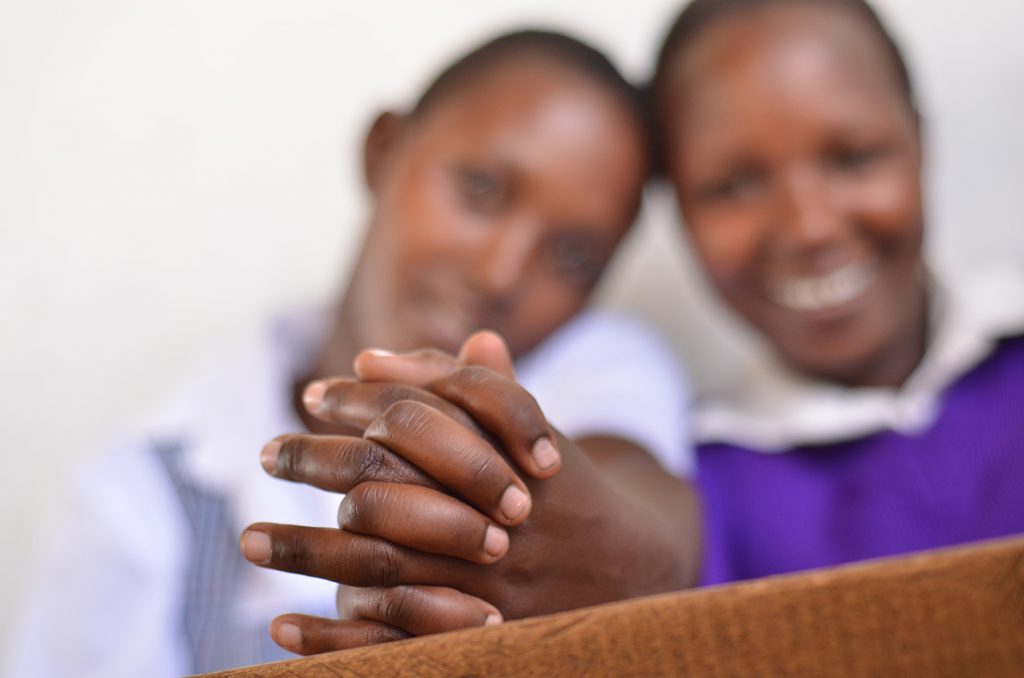 The twins dream of becoming a surgeon and a banker, respectively. They are diligent students in school and are consistently among the top students in class. They have the confidence to deflect criticisms from girls who ridicule them for abandoning their culture.

“We don’t feel any less of women,” Nashipai says, “because the Bible teaches us that we are all equal, and that we can do all things through Christ who gives us strength.”

From fear to freedom

Helene Bonkoungou is only 20 years old. She works hard tilling the fields, managing a home and caring for her family. She has been married for four years, but her husband, Idrissa, refuses to work. Instead, he spends most of her hard-earned income on alcohol. 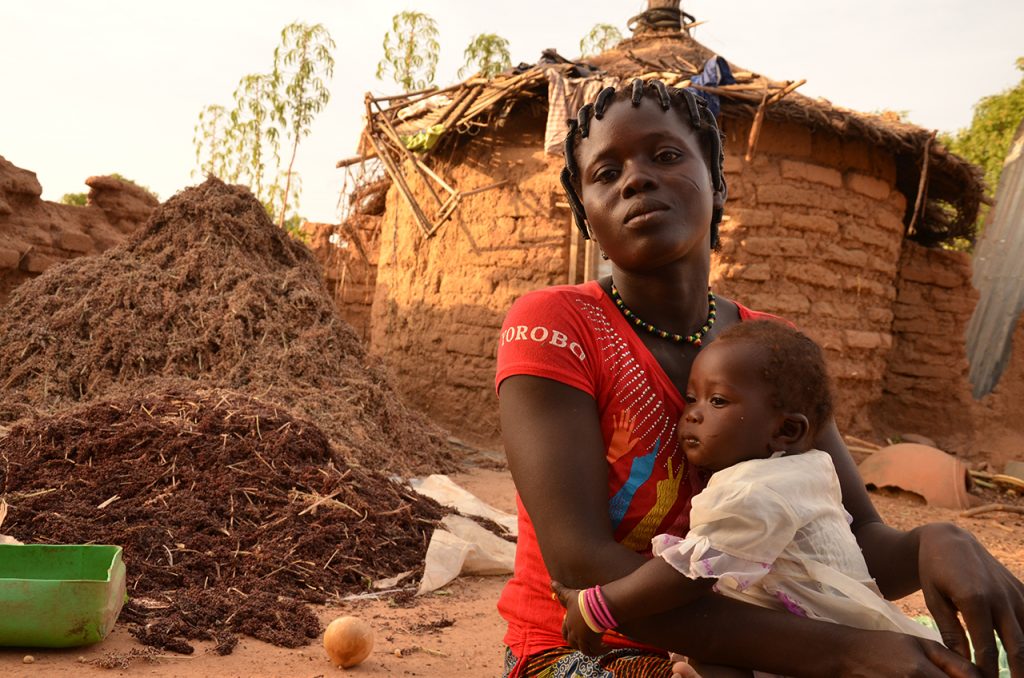 The family lives in a small home of mud brick at the edge of their village in Burkina Faso. Late at night, Helene would wait fearfully for her husband to come home from the bars, hoping she could gauge his mood and avoid his fists. On some occasions, Idrissa would force her to sleep outside.

Helene is not alone: One in three women worldwide have experienced physical or sexual abuse, the majority by a spouse or partner. Psychological and emotional abuse—more difficult to identify, but equally damaging—are also widespread.

Helene met Celine, the Implementer of the local Compassion Child Survival Program, while selling millet at the market. Helene was more than six months pregnant with her second child and was visibly malnourished. Celine told Helene about the program, and the following week Helene eagerly made her way to her local church, where she met 35 new and expecting moms—hardworking women, just like her. Suddenly, she didn’t feel so isolated. 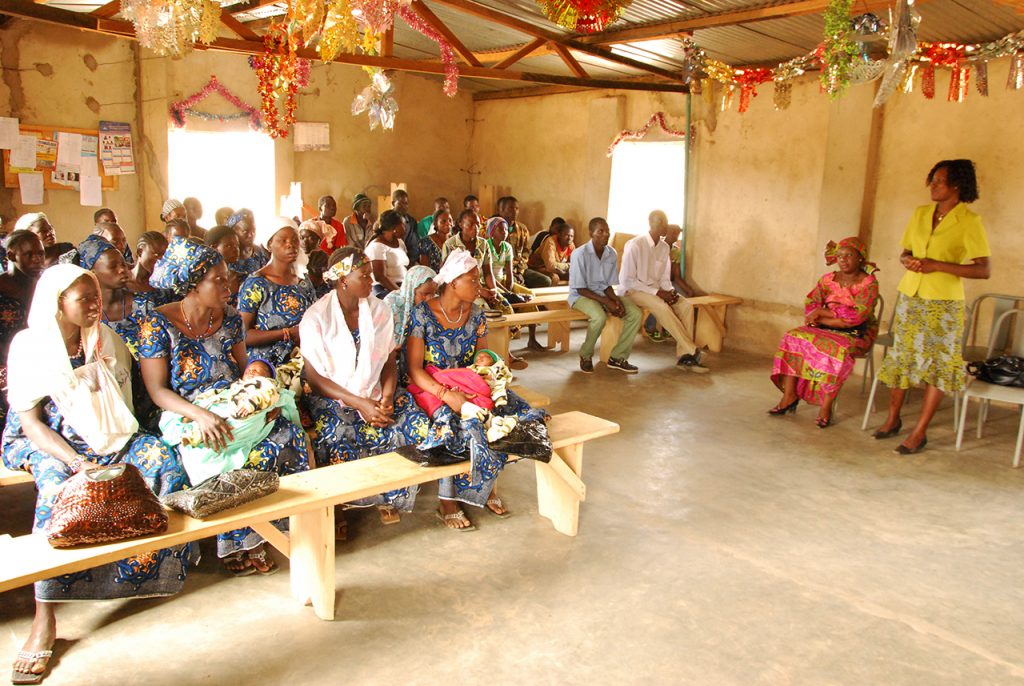 Through the program, Helene received regular medical care and nutritional support, and was taught how to keep herself and her baby healthy. She was also fed spiritually, learning about God’s plan for her life through regular home visits and time spent with the other moms at the church. Helene then took part in a workshop that focused on income generation through gardening and agriculture. Through this, she has been able to increase her crop of millet and sorghum, and her children—Hubert, now 3 years old, and Noellie, 8 months—are eating regular, nutritious meals.

Timothé, the church pastor here, became aware of the family’s situation and began meeting with Idrissa regularly. Gaining his trust was slow, but after months of meetings and constant prayer, Idrissa finally left alcohol behind. Today he is a different man, no longer abusive toward his wife and motivated to work. He recently took an apprenticeship course in welding and hopes to open his own shop to help provide for his family.

Not all families living with abuse experience such a positive transformation, but we praise God for working in the hearts of men like Idrissa and for providing advocates to be a voice for women who have none. Join us as we pray for girls and women who face violence around the world—that God continues to work through His Church to bring hope and freedom to every one of his beloved children.

Is not this the kind of fasting I have chosen to loose the chains of injustice and untie the cords of the yoke, to set the oppressed free and break every yoke?… Then your righteousness will go before you, and the glory of the Lord will be your rear guard.
Isaiah 58:6,8