Many Compassion children eat meals directly from the fields they cultivate. Learn how one family in the Philippines prepares their daily meal from farm to table! 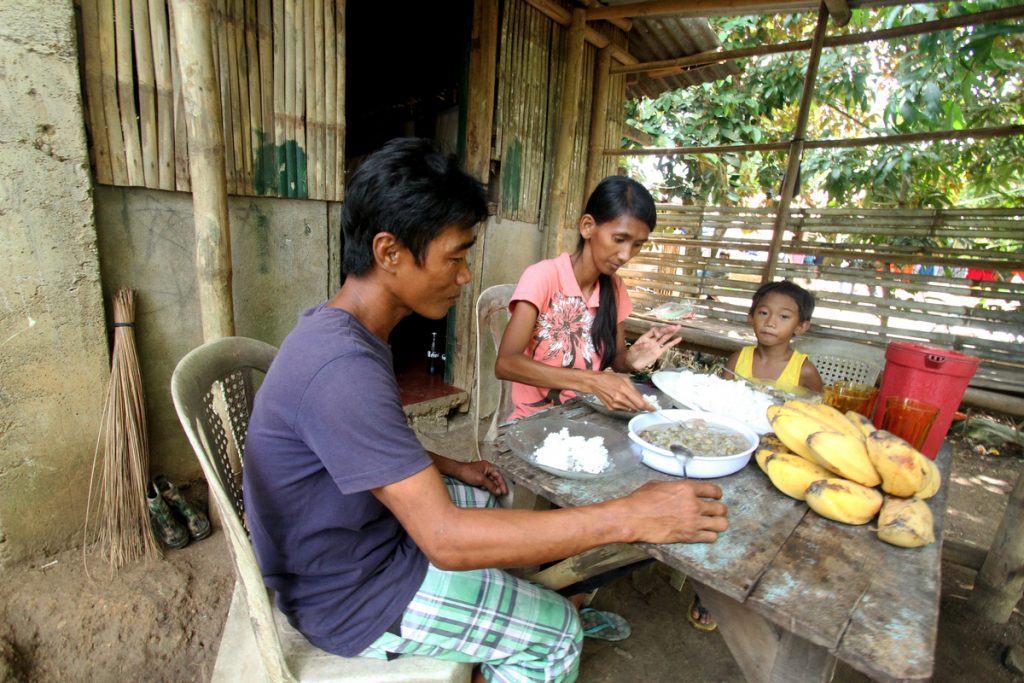 Randy’s family sitting down to their “farm-to-table” meal.

Randy is an eight-year-old boy in the Philippines who loves vegetables. He would eat okra over meat any day. He lives in the rural area of Abkasa, where families cultivate their own produce. Outside their bamboo hut, Randy’s parents grow a variety of vegetables and fruits, including banana, pineapple, greens, squash, eggplant, string beans and okra, Randy’s favourite. 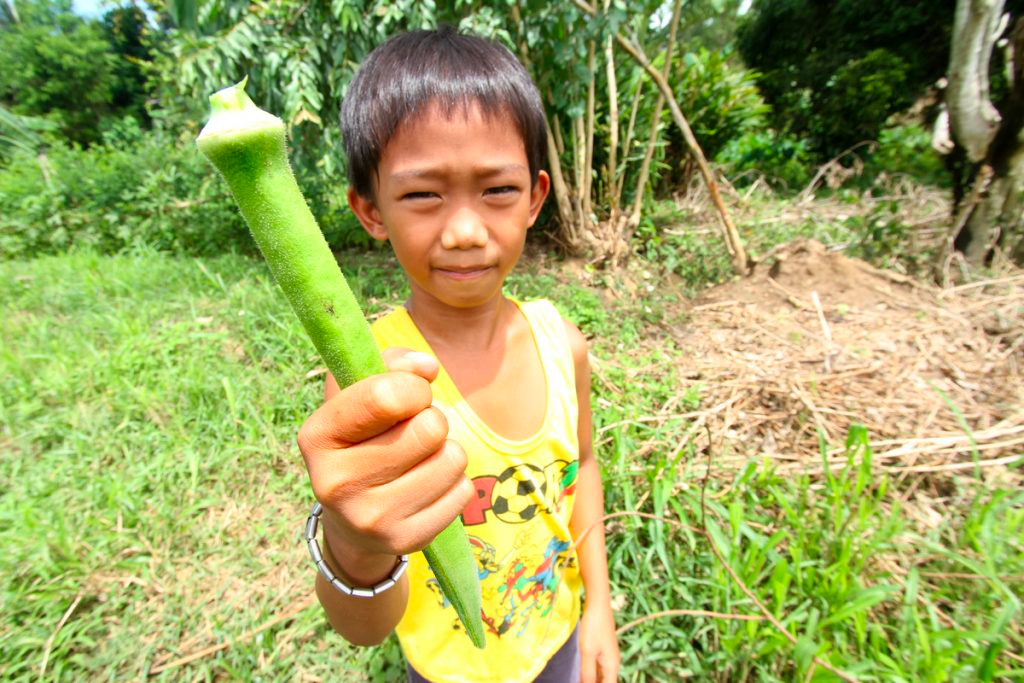 Randy with some okra he picked from his family’s garden.

His family starts their day with a dose of steamed leafy greens for breakfast.

“I harvest vegetables from the field for our food every day,” says Mary Jane, Randy’s mother.

The owners of the land they live on allow families such as Randy’s to plant their own crops to keep the soil healthy. The family generally eats only rice and vegetables, but occasionally they eat one of their many chickens that roam the fields surrounding their home. 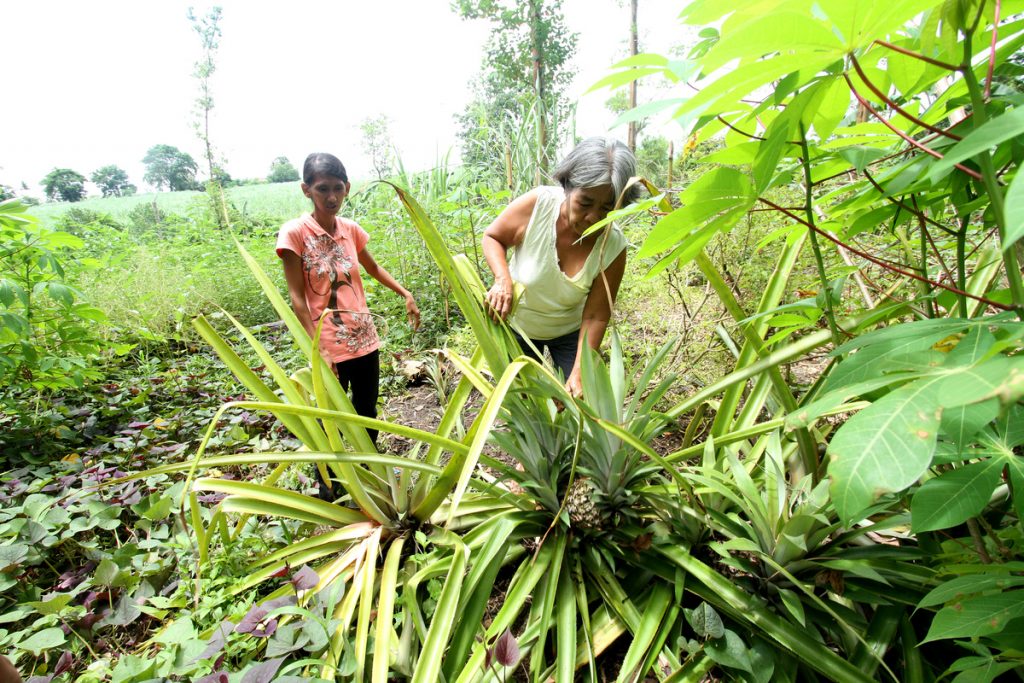 Randy’s mom and grandmother check to see if the pineapples they planted are ripe.

Today they decide to prepare chicken broth with banana shoots and green beans for lunch. This is a typical dish in the area, although those living in the city might be surprised that banana shoots are cooked here as vegetables.

Randy’s father, Randy Senior, is the family cook. He begins by dowsing the fowl in hot water and plucking the feathers. He then removes the skin, liver and innards. 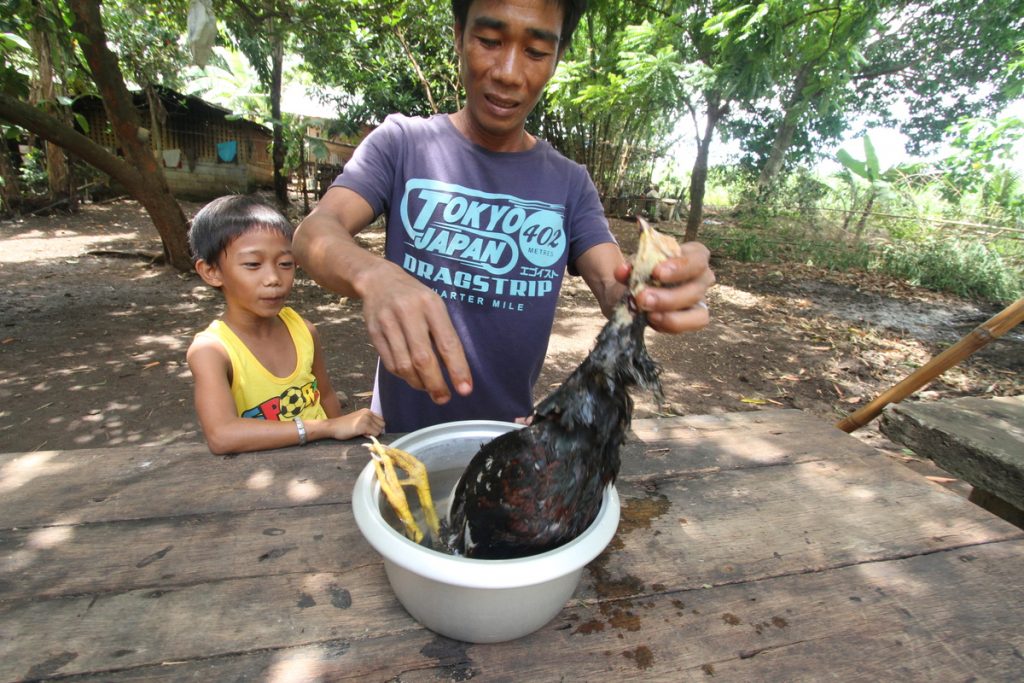 Randy’s father prepares the chicken, which he caught in their field, to be plucked and cooked.

Inside their wooden hut, Randy’s aunt cleans and prepares the banana shoots. She also prepares the garnishes—onion, garlic and green cayenne pepper. Every ingredient came from Mary Jane’s garden, except for a cup of green beans that she bought for 25 cents. 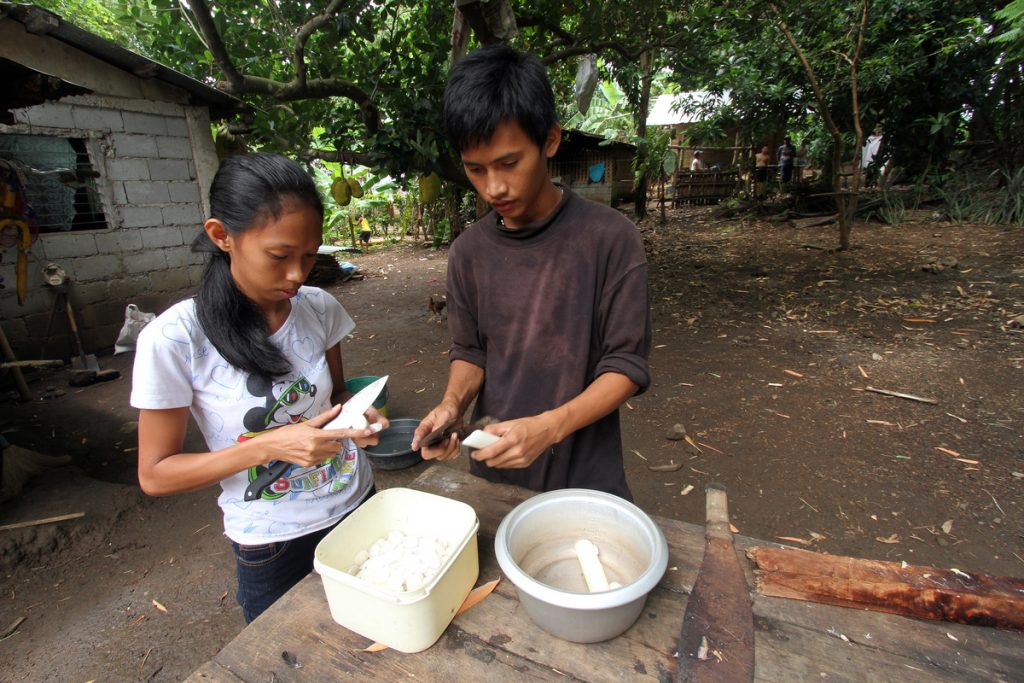 After cleaning the chicken and chopping it into bite-size pieces, Randy Senior gathers wood from his wife’s stack of firewood to start a fire and bring a pot of water to a boil. None of the more than a hundred homes in these fields have a stove, oven or fuel supply. 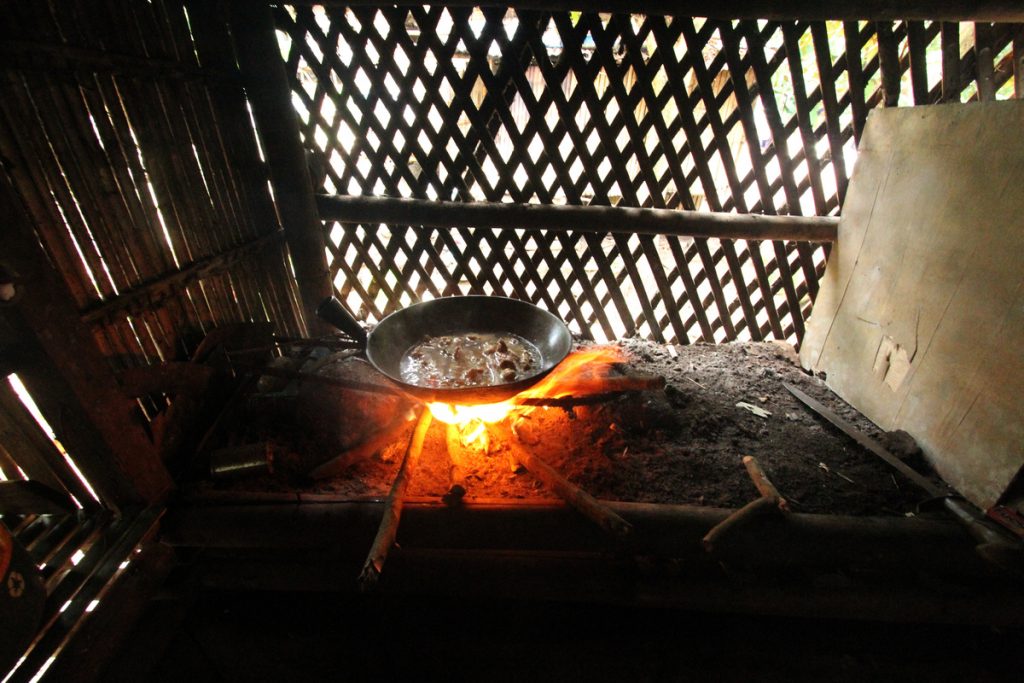 The family’s cooking fire, located in a corner of their bamboo home.

Mary Jane sells firewood as one of her many jobs—she is an entrepreneur of sorts.

“She sells firewood, vegetables, fruits, candies and other items to somehow earn a little money for her son,” says Daphne Pagunsan, the director of the Compassion centre Randy attends. “She is one of our reliable mothers, coming often to the centre to volunteer to clean or cook. I believe she developed the virtues of resourcefulness and industry from Compassion’s Survival Program.”

In fact, Randy’s parents are both incredibly hard-working. They work in the sugarcane fields, clearing the land of grasses and weeds from early morning until late in the afternoon. Their combined income is the equivalent of $37.61 CAD a week, which is why Mary Jane continuously thinks of other ways to earn money.

In season, food is not a concern for the family. They have enough and, as Mary Jane says, “it’s a blessing that our son is fond of eating vegetables, so all we need to worry about is rice.” In the Philippines, a meal is never complete without rice. 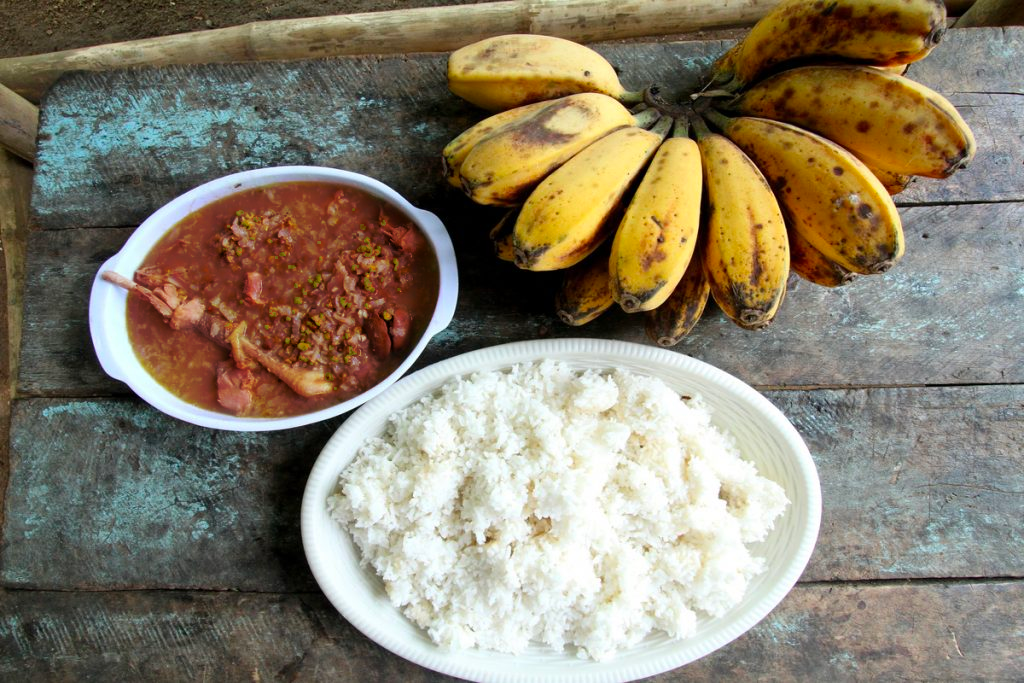 The finished meal of rice, chicken and vegetables, and bananas picked from the garden.

But out of season—during the hot summer days and typhoon season—food becomes a concern. “Those are days when we sometimes don’t eat a single meal,” Mary Jane says. According to the young mother, this is also when they more significantly feel the help coming from Randy’s sponsor.

Meanwhile, Randy Senior puts the chicken into boiling water as smoke from the fire fills the tiny home. Randy Junior can’t take the smoke in his eyes, so he runs outside to ride his bicycle, which was a gift from his sponsor. 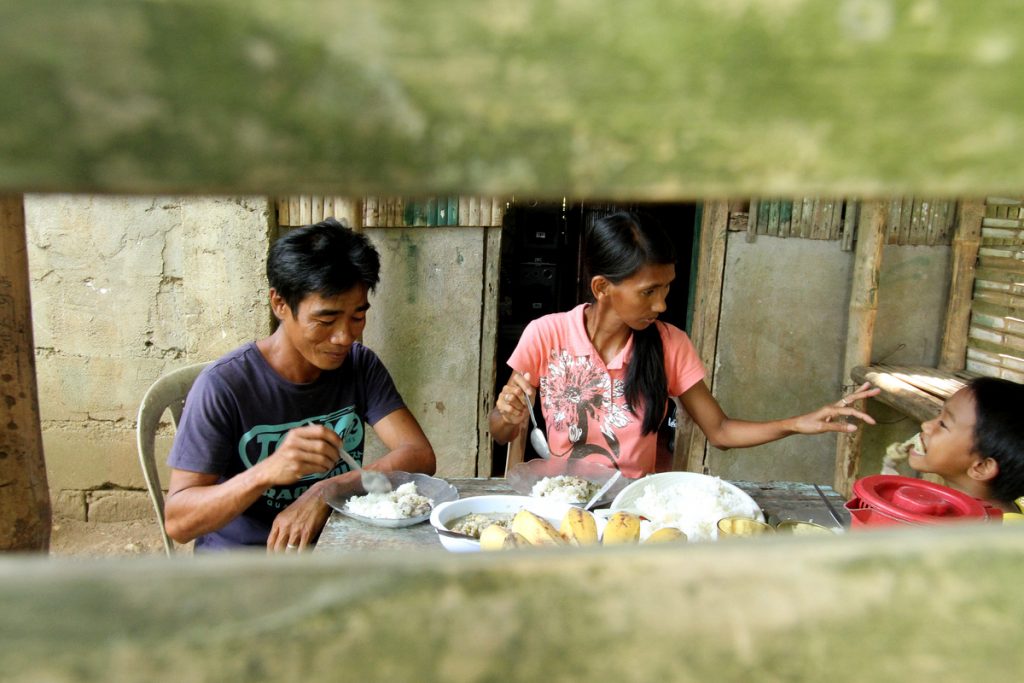 Finally, Randy Senior mixes all the ingredients as the chicken continues to simmer. After a few minutes, lunch is served! The dish is paired with home-grown bananas. Randy Junior comes running back home, excited to have this special meal with his parents.