It’s my first time on African soil, but I feel strangely at home.

Maybe it’s because home is where the heart is, and part of my heart is etched here in pen and ink. I’ve been writing to my sponsored child in Uganda for the last five years, and I’m eager to experience a piece of her culture, to see what her life might be like.

It’s also my first time visiting one of Compassion’s child development centres. I want to see with my own eyes what I’ve read so much about.

Our driver weaves slowly to avoid gaping holes and fellow travellers. Motorcycles carry two or more at a time and bicyclists (some with goats or pigs trussed up on the back) rattle past those on foot. Long-horned cows are herded across the road by stick-wielding children. Women tote babies on their backs and baskets of cassava atop their heads as they trek to market.

We trade rough city streets for even rougher country roads. Grass thatched huts are clustered in the long grass where women do laundry in plastic tubs. Others coax the patched farmland to yield maize, cassava and sweet potatoes.

I hang out the window as we drive, camera at the ready, and dust coats me like a second skin. That rusty clay is everywhere and judging by the towers of red bricks we pass, many have made it their means of income.

Tall stalks of grass glint like gold in the sun, and the clear sky seems even bluer against the deep greens and rich reds of the ground below. It’s like a painting made with every colour on the palette, and I’m overwhelmed trying to capture it all.

It’s hard to fathom that such beauty and violence can live in the same place. 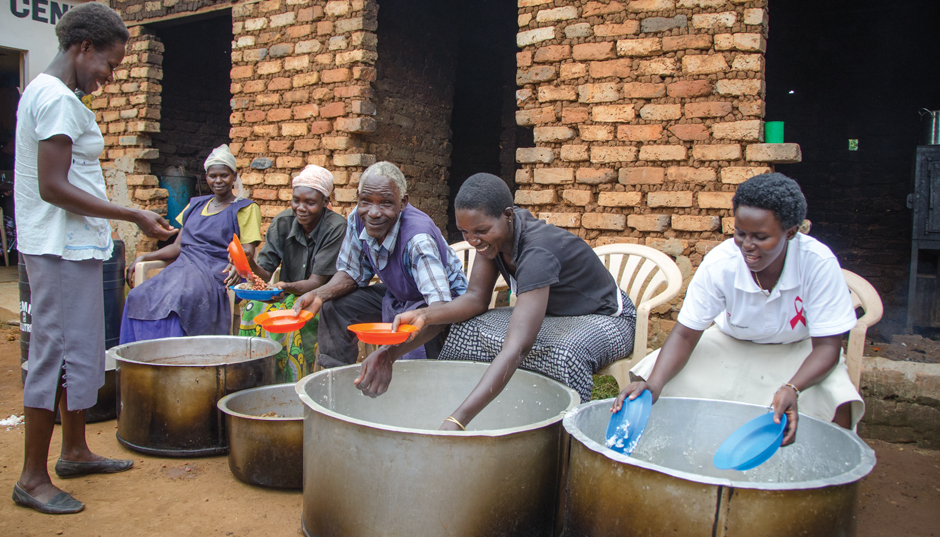 We’re in the north of Uganda, and already I’ve heard of crippling fear and stagnant hope. For more than 20 years, the Lord’s Resistance Army tore ragged holes in this country’s soft tissue. Children stolen from parents were moulded into an army of murderers, often forced to maim and slaughter their own families or used as sex-slaves for rebel troops. Our host, Grace, answers my questions with stories, her soft voice a contrast to the terror her friends lived through.

Sofia* was just 12 years old when she went to the cassava fields and didn’t come home. She was forced to carry equipment and care for the younger children in the soldiers’ camp. She constantly faced starvation, but her greater fear was travelling—anyone too exhausted to keep up would be shot. After a month Sofia managed to escape, but it was seven more months before she finally made it home.

Matthew* was eleven when he was kidnapped. He also carried heavy equipment, acting as a buffer for the rebels if government forces attacked. It was two years before he managed to escape during a skirmish, fleeing for his life through the bush. Several weeks later he was reunited with his family who had long believed their son to be dead.

Grace’s narration omits details that are better left in the dark, and I hear what she doesn’t say—these stories are not unique. I’m certain the children and staff we’re about to meet will have stories of their own. 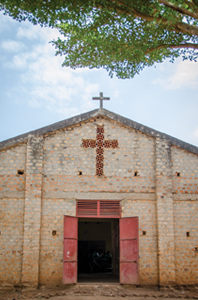 We pull into a small town, a thin metal sign announcing that we’ve reached our destination. True Love Child Development Centre, it reads in bold lettering. I smile at its certainty.

We step out of our vehicle and eyes peep out of classrooms, eagerly following us. A nervous excitement hangs in the air, and the children line up on the grass and welcome us in harmonized a cappella. We clap our encouragement and they break into a tribal dance, palms slapping the skin of a tall wooden drum. Their clear voices resonate against old stone walls.

After the performance, we share a meal of tea and toast and learn about the development centre. When we ask how True Love got its name, Pastor Alex smiles. He was hoping we’d ask.

“We used to be in a church that was divided, where people did not love one another.” He pauses to find the right words. “When we started this church, we knew we could not share God’s Word with others without showing His true love. So we called our church True Love, to remind us to love others the way God loves us.”

It isn’t just printed on their sign. It’s in everything they do.

Food is scooped into plastic dishes by volunteers who’ve spent hours in smoky cooking huts, making enough to feed every hungry belly. The work may be tedious, but they seize the opportunity to serve others, laughing and joking as they pass heaping plates of rice and greens to eager hands.

Children perch on plastic chairs beneath the heavy foliage of a tree, chalk letters on a dusty blackboard announcing the day’s lesson. The teacher speaks from her heart, an open Bible in her palms. Her words are echoed in every classroom, no matter what the lesson—love God and love one another.

We befriend True Love’s director, Donosio, a vibrant man who beams as he tells us he was once a sponsored child himself. After graduation he went on to university through the Leadership Development Program, and his life has never been the same. He laughs with excitement at how God works—and how he gets to give back what was given to him.

I join a group of youth on Sunday morning as Donosio teaches generosity. 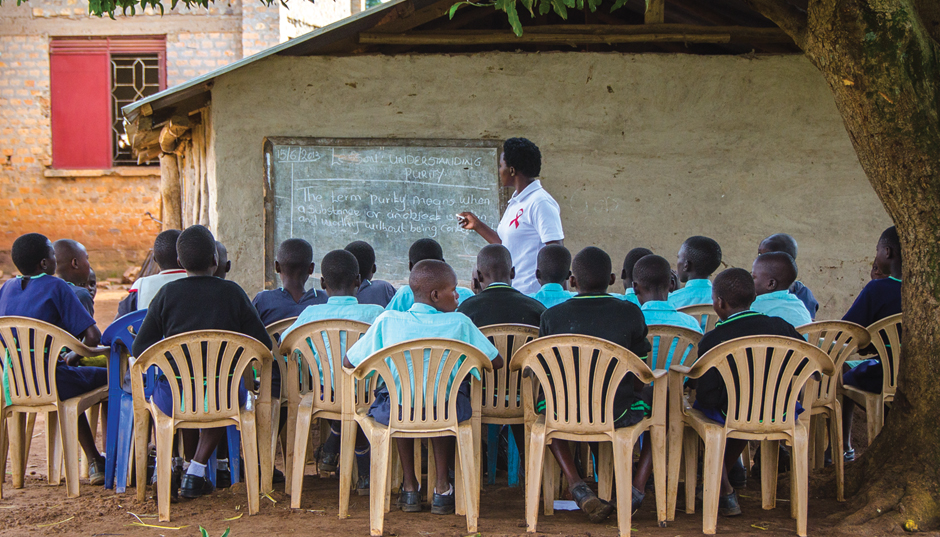 “Maybe you have a million shillings,” he shouts, and his students giggle at the thought. “Maybe you have only one mango to give. But God can use whatever you give to bless others. He can turn your one mango into much, much more!” He gestures wildly and the children laugh along with him. I do, too—his joy is contagious. But how can I understand having so little that one mango is a hard-earned offering?

I can’t—until we sit in church and a woman places a bag of beans in the offering plate.

A church member displays the beans like a trophy. “Who will buy these beans?” she shouts. “Who will honour our sister’s gift?” It’s a common occurrence in this impoverished community, and the response is immediate. The beans are quickly auctioned off and the purchase price is lovingly placed in the offering plate. It’s like seeing the parable of the widow’s coins play out in front of me. How could I not understand “true love” when a meagre offering is treated with such respect?

The LRA’s war is a thief, stealing children from parents and hope from a country. It has left wounds that run jagged and deep. But this church’s persistent love is like salve over those scars—a healing only Jesus can bring. I want to take the beauty and the hardship home with me, to keep feeling that African dust on my skin, because Pastor Alex is right. There’s only one thing that can soften hearts, heal souls or draw broken people through the church’s open doors. “It’s God’s love,” said Pastor Alex. “And true love is what brought you here to us.”

*Names have been changed to protect their identities.

Eight days. That was all we had in Uganda—and none near where my sponsored child, Barbra, lives. Our itinerary was packed, so I didn’t even ask to meet her. I convinced myself that a gift would suffice. 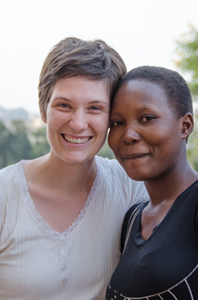 When I asked our host, Grace, if she would deliver my gift, her double-take was near comedic. “You flew so far to get here,” she said slowly, “Why aren’t you meeting her?” She was on her phone making arrangements before I could think up a feasible answer.

I found out Barbra was coming the day before we left. I toyed nervously with her gift as I waited, wondering what she’d be like in person. Her letters were always somewhat formal, and questions often went unanswered. What would we talk about?

And then she was there, and I didn’t have to say anything. Soft-spoken to begin with, her loss of words mirrored my own—we were too overjoyed to do much more than laugh and hug. It was like being reunited with family. I loved her like a sister I’d never met.

We walked together and talked about everything that came to mind—families, music, the Bible, plans for the future. She shared her dream of becoming a lawyer, of doing something about the injustice she saw. I was so proud. Before we parted we prayed together, arms across shoulders and tears in our eyes.

I felt a little silly handing Barbra her gift when we’d just received one much bigger—but that’s what happens when God steps in. And one thing’s for certain, our letters will never be the same. 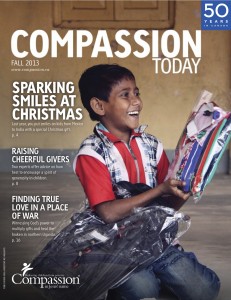