November 19th is World Toilet Day, a day that celebrates toilets and raises awareness of the 4.2 billion people living without access to safe sanitation. It’s about taking action to tackle the global sanitation crisis and achieve Sustainable Development Goal 6: water and sanitation for all by 2030.

A large part of Compassion’s work is partnering with churches around the world to bring safe water and sanitation to children and families in poverty. We do this by providing safe water, washrooms and hand-washing stations and community education. This World Toilet Day, we want to shed light on the stark reality that many communities around the world live in without access to toilets today, and share why our work in this area is more important than ever.

Today, we are visiting the village of Tolombukan, Indonesia. 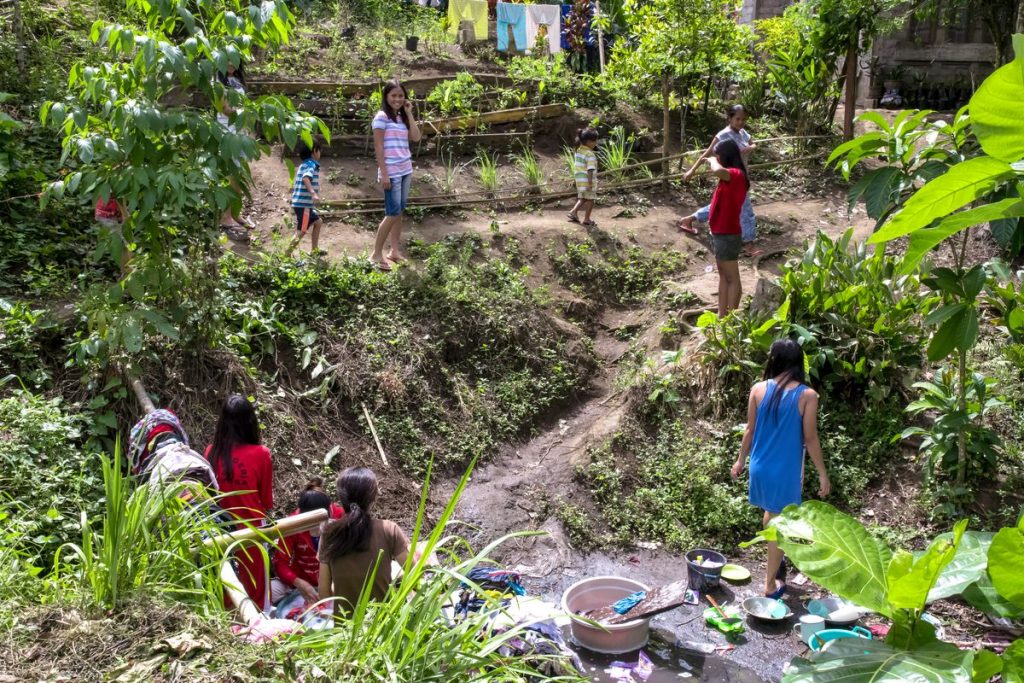 Tolombukan is a small village in the southeast Minahasa district located in North Sulawesi, Indonesia. It’s surrounded by rivers and creeks, each easily accessible by local communities for daily activities like bathing, washing clothes, washing dishes, bathing cattle and even defecating. 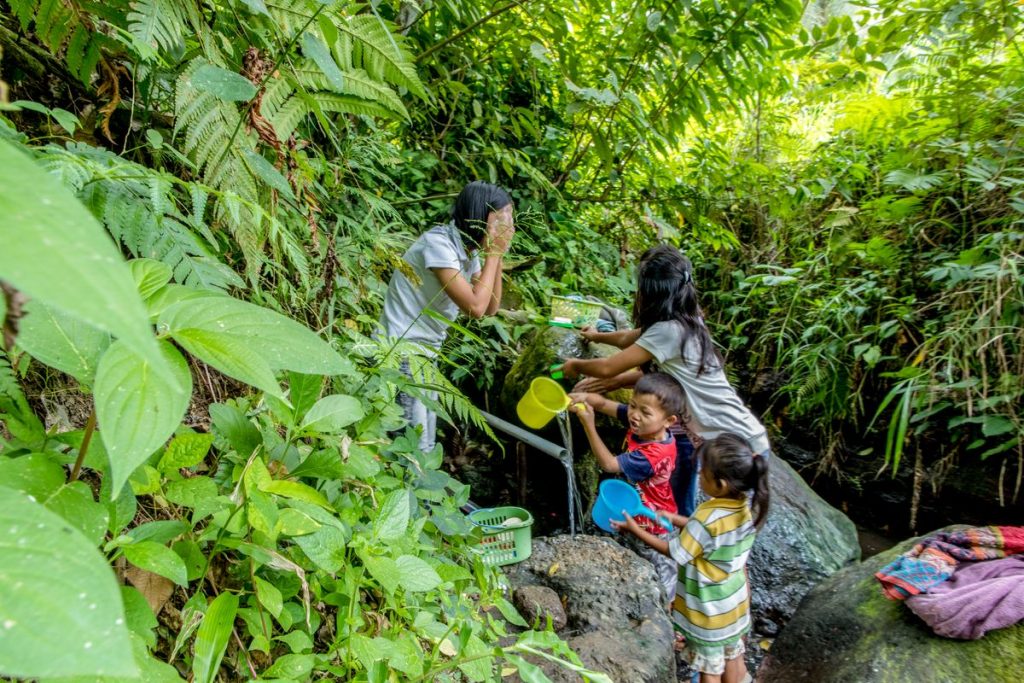 Local children bathe in the river that is also used for washing clothes, washing dishes, bathing cattle and even defecating.

The average monthly income in this community is only enough for families to meet basic needs such as food, transportation and school fees. People don’t prioritize other essential things above these, including latrines.

“People here just focus on buying food and spending money on transportation and school fees. Their income is just able to cover those needs,” says Dandy.

Though this issue has been longstanding in Tolombukan, other priorities outweighed providing public latrines for people who don’t them at home. But in 2010, the issue began to come to the forefront.

“In 2010, community leaders started to be concerned about our village’s need for latrines, public baths and clean water. I joined in some meetings to talk about those things and work toward them, but those essential needs aren’t yet fulfilled,” says Trevi, pastor of Compassion’s church partner in Tolombukan. 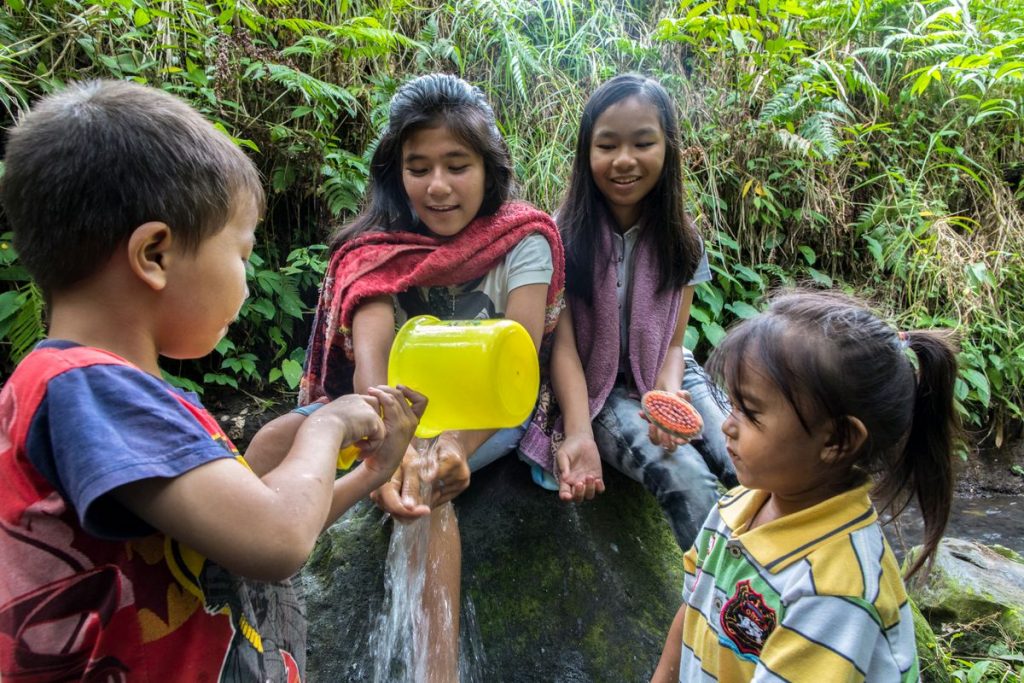 Eventually, four locations of public baths and latrines were provided but were not located close to residential areas, making them hard to access. Because of this, residents still used neighbours’ toilets, rivers near their homes and even their backyards under trees.

For teenage girls in the community, the challenges and vulnerabilities are even more apparent.

“I don’t feel comfortable bathing together at the public baths because I feel anxious and worry someone will peek at me. These feelings come because in the past, there was a case like this,” says 15-year-old Siska. 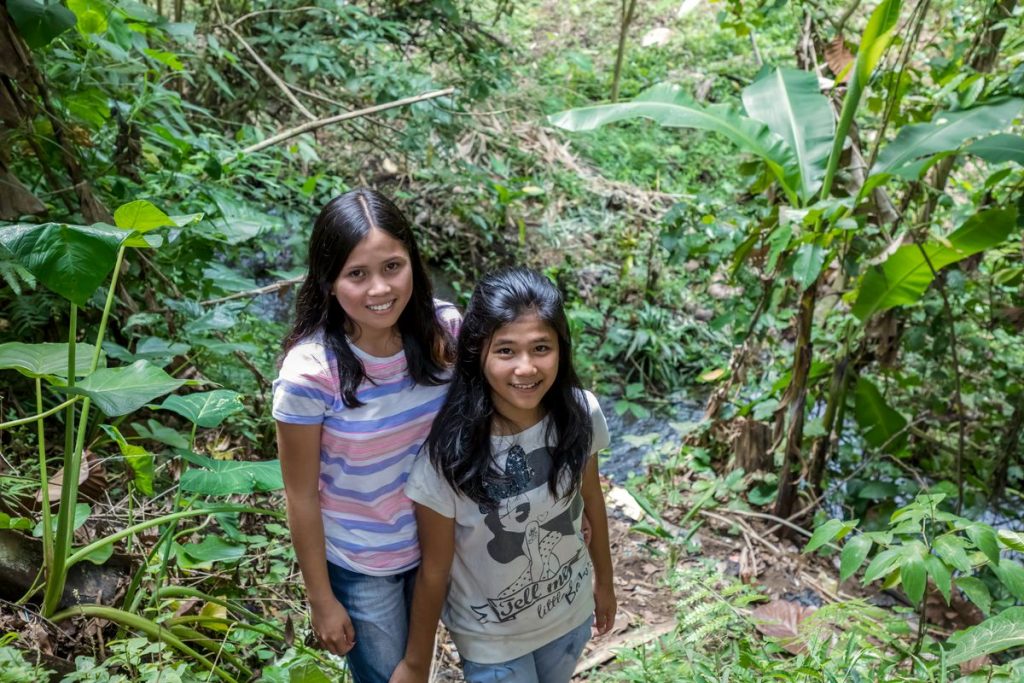 Siska and Anita struggle to feel safe in their community.

Since partnering with Compassion in 2010, Compassion’s local church partner has been working to challenge the mindset of parents in the community towards hygienic habits, especially encouraging the use of toilets to defecate. Ideally, children will learn these values at a young age, but this is contrary to what has historically happened in Tolombukan.

“The big challenge in our centre is educating children and changing their parents’ mindsets about living a more hygienic lifestyle,” Dandy says. “[When the centre first existed], parents allowed their children to urinate and defecate in the churchyard. In their minds, children could do that because they are just children.” 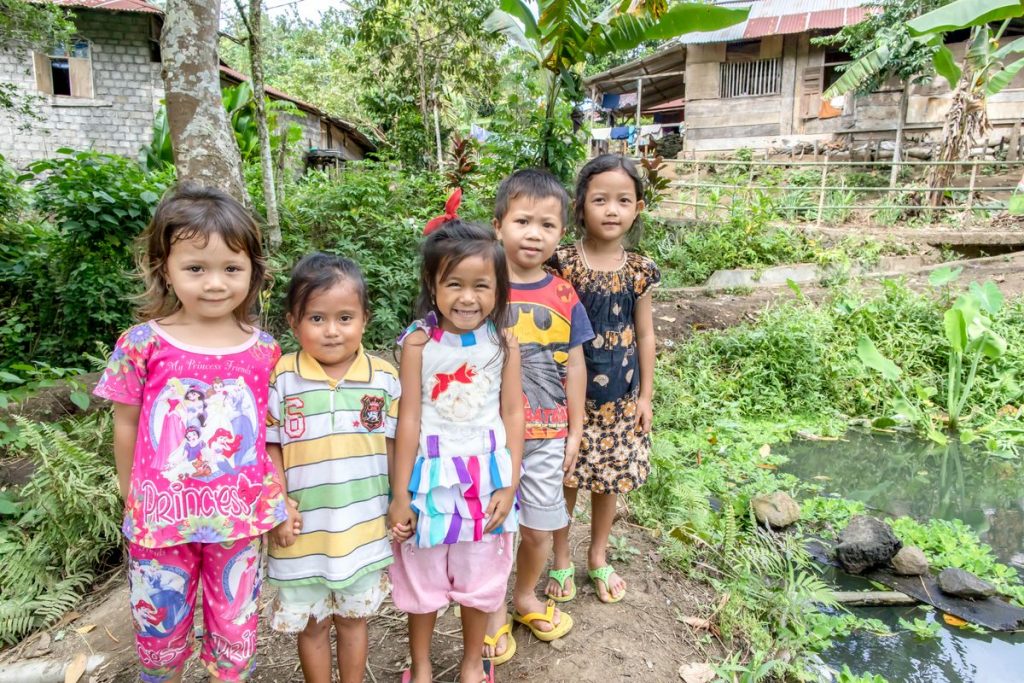 Some of the children whose lives and hygiene habits have been transformed since their local church has partnered with Compassion.

The limited availability of toilets in the church didn’t help with this situation.

“In 2010, we only had one toilet. It was not enough to accommodate beneficiaries,” Dandy says.

So, in July 2013, the centre submitted a proposal to Compassion Indonesia that would allow them to get the financial support they needed to build more toilets for the centre.

After eight months, the proposal was fully funded by Compassion donors, and community members got right to work! Caregivers and other residents of the community worked together to build the latrines. 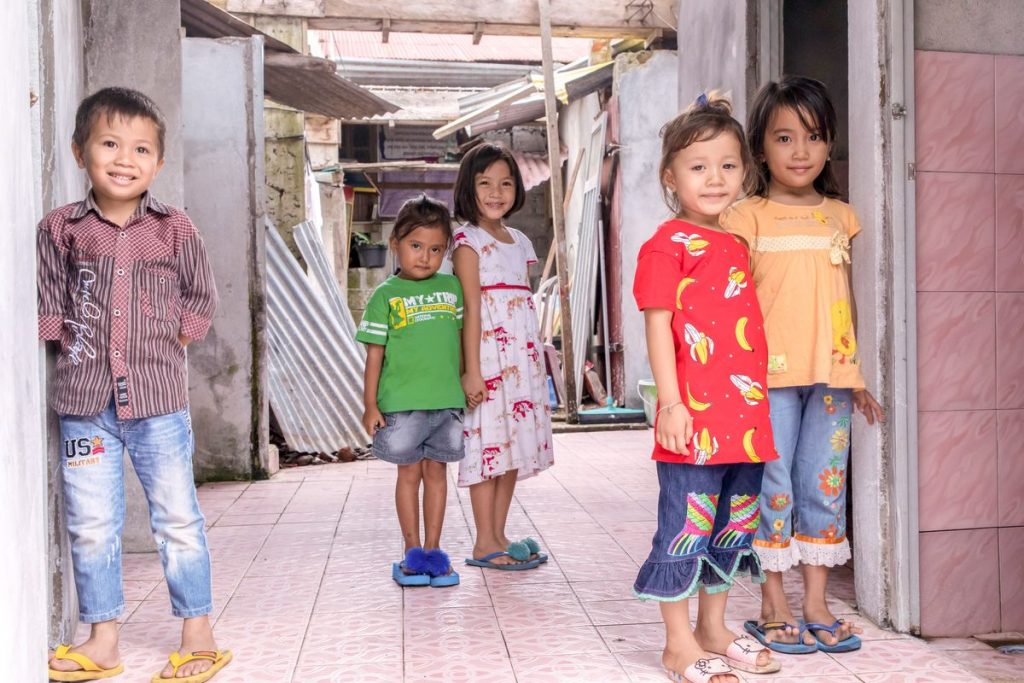 Children who attend the local Compassion centre in Tolombukan stand in front of the newly constructed toilets built by their family and neighbours and supported by Compassion.

“We [also] asked for contributions from parents and our congregation,” says Pastor Trevi.

It’s typical for community projects at Compassion centres like this one to be supported by donations from the community. This helps community members to feel ownership of the centre and discourages dependent development. With the involvement of the parents and congregation, four brand new toilets were built in four months!

Toilets providing safety, comfort and dignity for the community

The new toilets at the Compassion centre have been transformative not only for the children who attend the centre but for church members and even neighbours who live near the church and don’t have access to their own latrines.

They have also provided a safe space for teenagers who are susceptible to danger in public bathrooms.

“Before partnering with Compassion, I wasn’t aware of how susceptible our children are to danger simply because of a lack of toilets. They are vulnerable to falling in the river or to physically or sexually violent behaviour from adults when they defecate in the river or bathe in a public bath,” says Olie, child protection staff member at the Compassion centre. 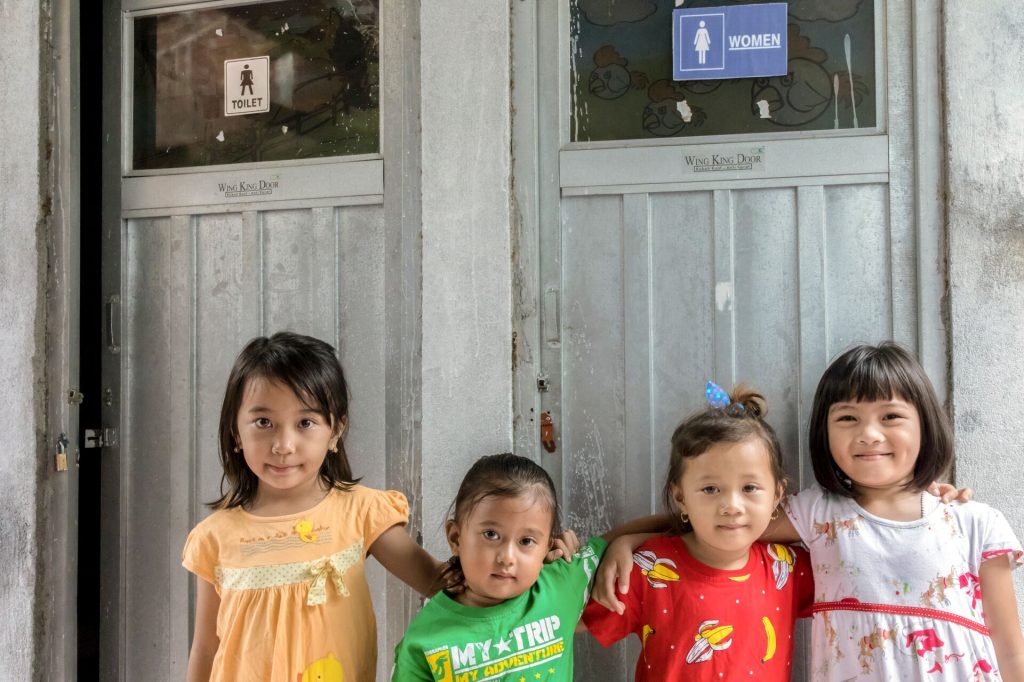 Since installing more safe toilets at the centre, staff have noticed a big difference in the home lives of the children in their care.

In 2018, only nine per cent of the children who attend to centre—about 30 children—had no latrines in their homes. This has fallen significantly since 2010, when 50 percent of beneficiaries had no latrines. It has become clear to staff that caregivers have since made safe water and sanitation a priority for their families.

“I do believe that parents’ mindsets have changed because of the influence of the Compassion centre; we teach their children and they return back home and share with parents about what they have learned. Also, the parents can see the impact of how their children have changed and grown up to understand what a hygienic life is,” Dandy says. 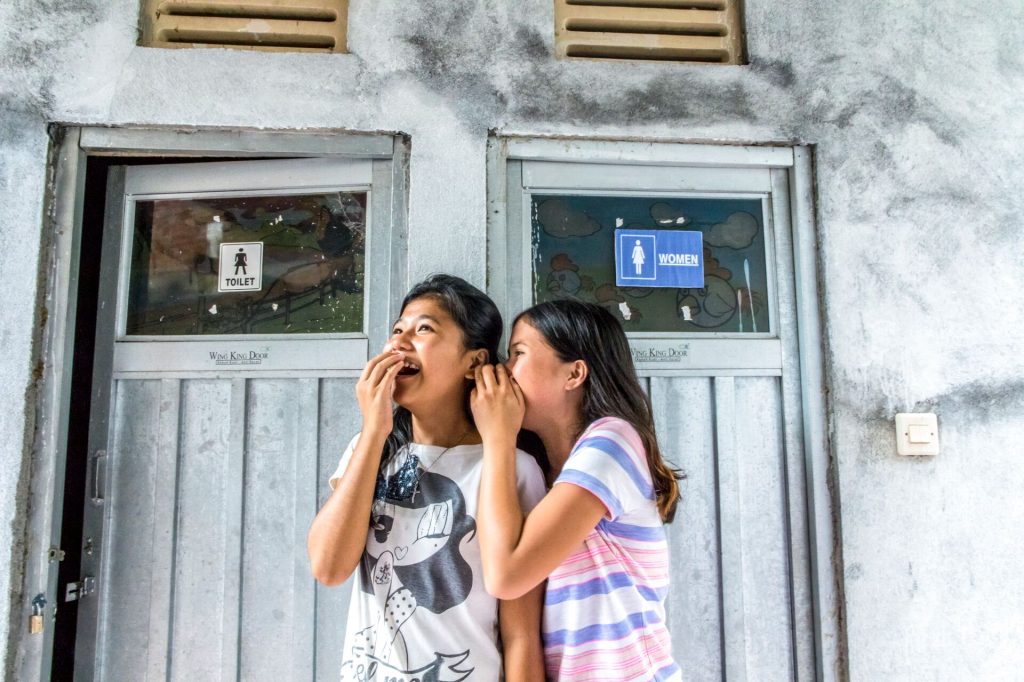 Siska and Anita, two teenage girls in Compassion’s program stand in front of the new toilets located at their Compassion centre. Here, they can finally feel safe.

“In the last three years, we have not found parents allowing their children to urinate or defecate in our churchyard anymore. All our beneficiaries, including the ones younger than 5 years old, know they should access the toilet to urinate and defecate. It is a good sign that our beneficiaries and their parents are slowly understanding healthy toilet practices.”

As attitudes about hygiene continue to develop, the people in Tolombukan will seek out further resources and solutions to build the toilet facilities they and their children need.

This Christmas you can provide children in poverty with access to safe washrooms in their community. Will you give dignity and protection to children this season?