Tariku Hailemariam’s mom was just 15 years old when she had him. She was unable to take care of him, so she gave him up for adoption. Tariku’s adoptive mother, once economically capable of raising him, lost everything she had a few years after she took him in. So his family lived off the money she got begging from factory workers on pay day.

When he was six years old, Tariku started doing small tasks to earn some money around his town in Ethiopia. He and his mom survived on the small amount they earned.

“Life was difficult,” he said. “My mother was always sad because she could not take care of me as she wished. At that time, I wished for only two things: to see my mother happy and to attend school.”

Both of those wishes were to come true. Tariku says, “One day when I came back from cutting the grass at one of the homes in the neighbourhood, I found my mother deep in her thoughts. She asked me if she should get me registered with the ‘missionaries’ she heard about. I told her I would be happy as long as I got an education. The next day my mother took me to the church and a new chapter in my life began as I was accepted into the Child Sponsorship Program.”

Tariku started going to school and made new friends at the Compassion centre. He attended Sunday school at the centre, where he learned about the love of God. The centre quickly became his second home. The love and care from the staff made him believe he was an important person.

Tariku’s teenage years were filled with school, work and serving the Lord. In his interactions with the centre staff, he began to craft a vision. He felt he should do something for the children who were not getting the support he was.

“God gave me a vision to help and support children who were less privileged than I was,” says Tariku. “I knew how much the support in Compassion changed my life and I wanted the children around me to have the same level of transformation that happened in my life.”

After studying accounting at the university, Tariku was ready to implement his vision. He mobilized his friends, centre staff and pastor to share their extra to support children who couldn’t go to school. That initial group started by supporting 10 children with school supplies, uniforms and tuition. They each only had a small amount of money, but when collected, it performed miracles for children who never had the chance to go to school.

Tariku then mobilized local churches, sharing his vision before many congregations. The ministry that started with 10 children grew to 165 children in its third year.
Tariku also had a heart to care for the elderly.

“My heart cringed whenever I passed by the villages and saw the elderly sitting by their houses and roadsides with no one to take care of them or even talk to them,” says Tariku. “I knew from the ones who were around me that most of them had nothing to eat at home.” 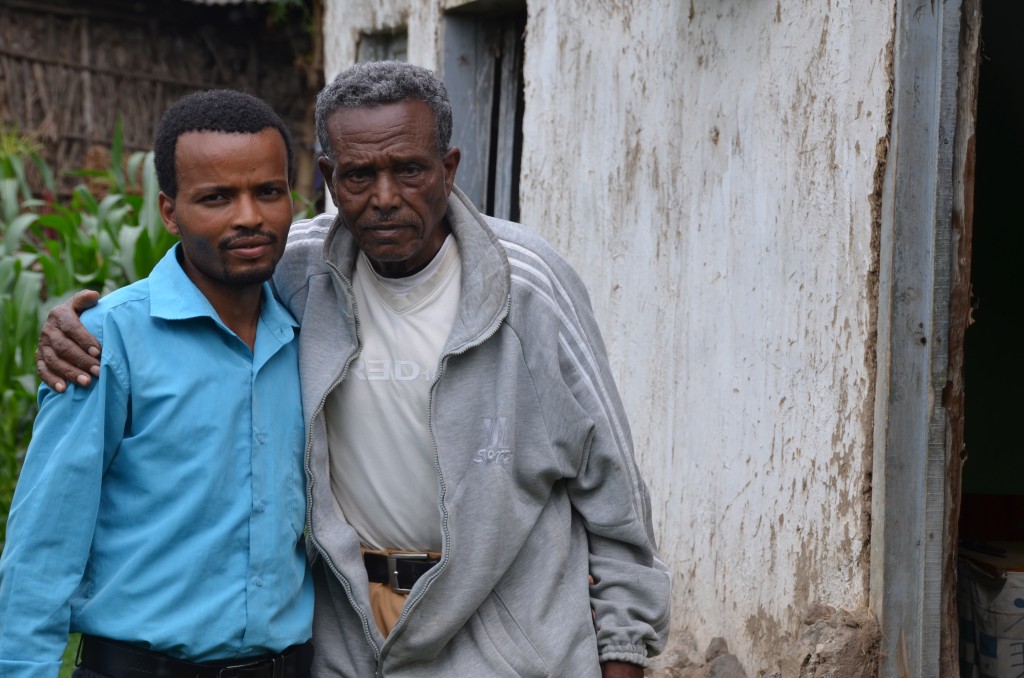 He talked to parents of sponsored children who each gave a small amount of grain to be shared with the elderly. It added up, and at the end of the first day, they had gathered 171 pounds of corn! Tariku also got people involved in helping the elderly with their basic needs: bathing them, washing their clothes, cleaning and repairing their houses, and feeding them. He and his wife, Masresha who is also a Compassion graduate, now regularly care for four elderly people.

It has been four years since Tariku started helping children around him and giving them the chance Compassion gave him 13 years ago. He and Masresha have even mobilized other Compassion graduates to meet the educational needs of 65 children in their town.

Tariku concludes, “My stay in Compassion has taught me the greatest lesson of my life. I learned how to be kind to others and give from what I have at hand. My wife always says that our God has taught us how to love others, and she says that we were loved by people who never met us throughout our lives. We both believe that it is our responsibility to reach out to those around us and impact their lives with what the Lord blessed us with. We believe that, in a way, we are paying forward the kindness and love we were shown during our stay in Compassion. We believe that God has worked through us to take away the blindfold of poverty from many children.”