Jayanti could not leave the four walls of her home. Her mother-in-law wouldn’t let her.

In Jayanti’s village culture in India, the mother-in-law reigns supreme. All other women fall dead last in the food chain.

Other women don’t have freedom to make decisions. They are confined to the house. Stepping outside to so much as talk to a neighbour is believed to diminish the family’s status in the community.

School? That’s dropped as soon as a woman marries, usually in her teens.

Food? At meals, women eat last and alone. A pregnant woman isn’t given enough to eat, for fear her baby will be too big.

Rights? Jayanti couldn’t even go out for a bath at the pond without her mother-inlaw’s permission.

One day when she was out bathing, she met some mothers who told her about Compassion’s Child Survival Program. A few days later, she saw the program workers visiting a mother’s home nearby. Jayanti took a chance and ran to them. She told them about her situation and begged them to register her young child. They agreed and enrolled her as soon as there was a place for her.

But it wasn’t easy. Her mother-in-law didn’t like Jayanti to leave the house. Members of the church that operated the
Child Survival Program had to plead time and again to get permission for Jayanti to attend the program. Finally, her mother-inlaw agreed.

Now, through the program’s support, Jayanti and her daughter have medical care, supplemental food and access to
education.

But the real transformation has happened on the inside.

Jayanti learned about God—His love and compassion for her.

Jayanti learned, despite everything her culture taught her, that she has value.

Jayanti learned that God wants to use her, a woman living in poverty, to change her community.

Jayanti had always felt plagued by the poverty of her village and wanted to help the other women around her. At the church, she developed a sense of self-worth. She wanted to share what she’d learned with other women in her situation.

As it turned out, God gave her amazing leadership skills and a vision for how she could make a difference.

“The Child Survival Program gave Jayanti the platform to interact with other mothers and learn new things that made her outgoing and sharp and also helped her to understand rights for women,” says Rabindranath, Jayanti’s husband. 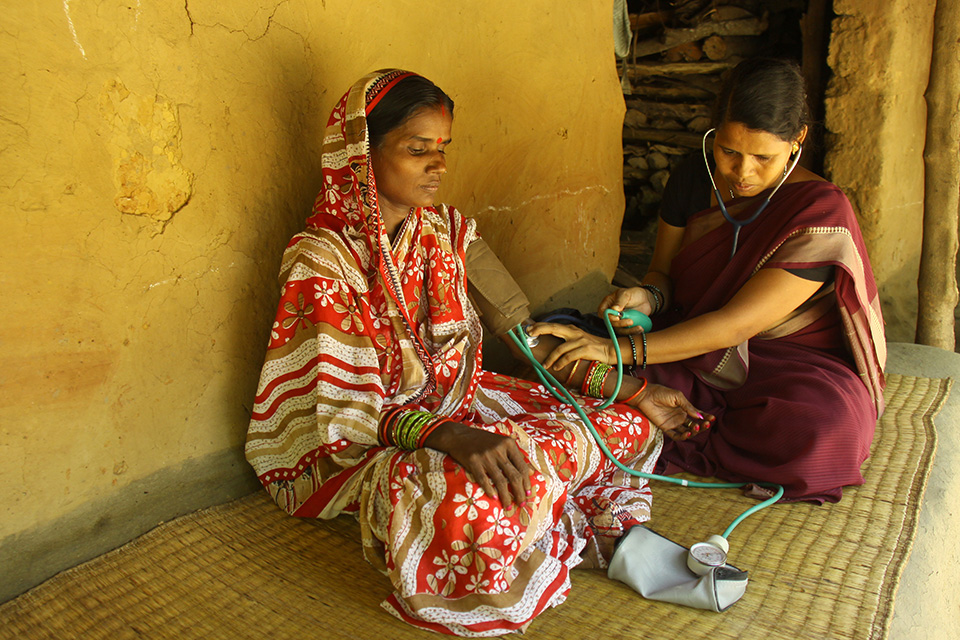 Jayanti and her daughter get check-ups at home each month.

She started teaching other women in her village what she learned at Compassion’s program. They call themselves the SHG—Self Help Group. Jayanti arranged for the group to get government accreditation and even a grant to start small businesses. Jayanti’s husband only makes $28 a month as a watchman, but now she can help buy food for her family because she sells eggs and fish.

Jayanti knew she wanted to do more to help other women and children struggling to survive. So Jayanti dared to
run for the position of ward in her village government—the first woman ever to try for the position.

Now Jayanti represents five villages.  She is using her influence to tap into government grants and bring change to her community.

“I want to use my influence in the village government to empower women and help families come out of poverty by creating small business opportunities for them, starting a tailoring unit for the women of our community and bringing development to my ward by making good roads and bringing a water facility,” Jayanti says.

This woman who once had no voice, whose life was constrained to four walls, is now creating a new future for her community.