Like many breadwinners around the world, Farid returned home after a long day of work and eased into a chair, ready to enjoy the evening with his family. But on this particular evening in late February 2020, when he tried to stand back up to play with his two young daughters, a hot pain flared across his lower back. The long hours walking the streets carrying and selling chicken had taken a severe toll on his body.

Eight-year-old Mim and three-year-old Mariam didn’t understand why they couldn’t climb on their dad like usual. “Daddy, won’t you take us to the shop to get some sweets?” they asked. But there wouldn’t be any such fun for several months. Farid would be bedridden for quite a while, undergoing physiotherapy treatments.

“I didn’t know how I’d feed my girls if Farid wasn’t beside me.”

The girls’ mother, Khadiza, felt her heart drop when she saw her husband in such a state that February evening. Beyond worrying about her husband’s health, she worried about their family. He was their sole income provider. They all depended on him for their daily bread. 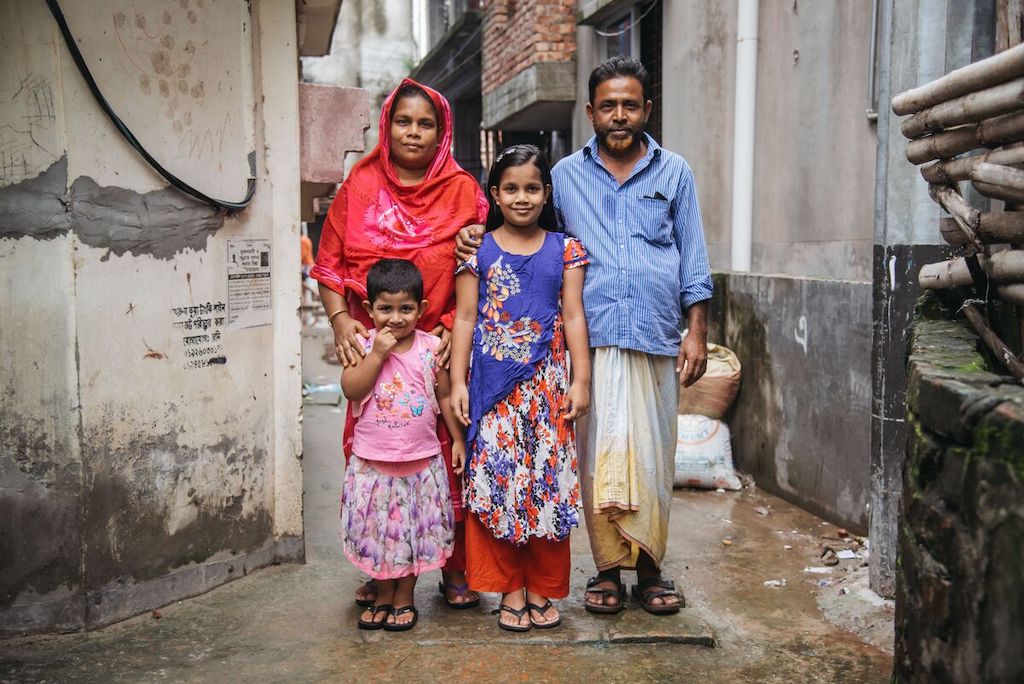 Farid and Khadiza with their daughters Mim, 8, and Mariam, 3.

Of course, these worries soared even higher when just a month later, the COVID-19 pandemic turned the whole world upside down, including the family’s community in Bangladesh. As a housewife, Khadiza already struggled to find work. As the government’s strict quarantine rules forced workplaces to shut down, her quest became next to impossible.

“I didn’t know how I’d feed my girls if Farid wasn’t beside me,” she says.

She found herself taking desperate measures, begging friends and relatives to loan her money—most of which had to be spent on Farid’s treatments.

“All I ever prayed and hoped was for someone to see our vulnerability in this crisis and help us,” Khadiza says. “I couldn’t find an answer to my problems.”

Give to families at risk of starvation

Soon, Mim began to notice how tense her mother was and how desperate her parents seemed. She stopped asking for treats, like the trips to the shop she used to take with her sister and father to buy sweets. Instead, she quietly ate whatever was fed to her: usually mashed potatoes or boiled eggs, but sometimes just rice and lentils. Long gone were the days when her dad would bring home her and Mariam’s favourite, fish, for the family to share.

“All these days when my girls came to me hungry, as a mother I had to embarrassingly make an excuse and keep them busy to make them forget about their hunger.”

For three months straight, Farid laid in bed, unable to do much else. But in the midst of the family’s suffering came good news. The Compassion program that Mim is a part of would begin providing emergency food packs to families like theirs. 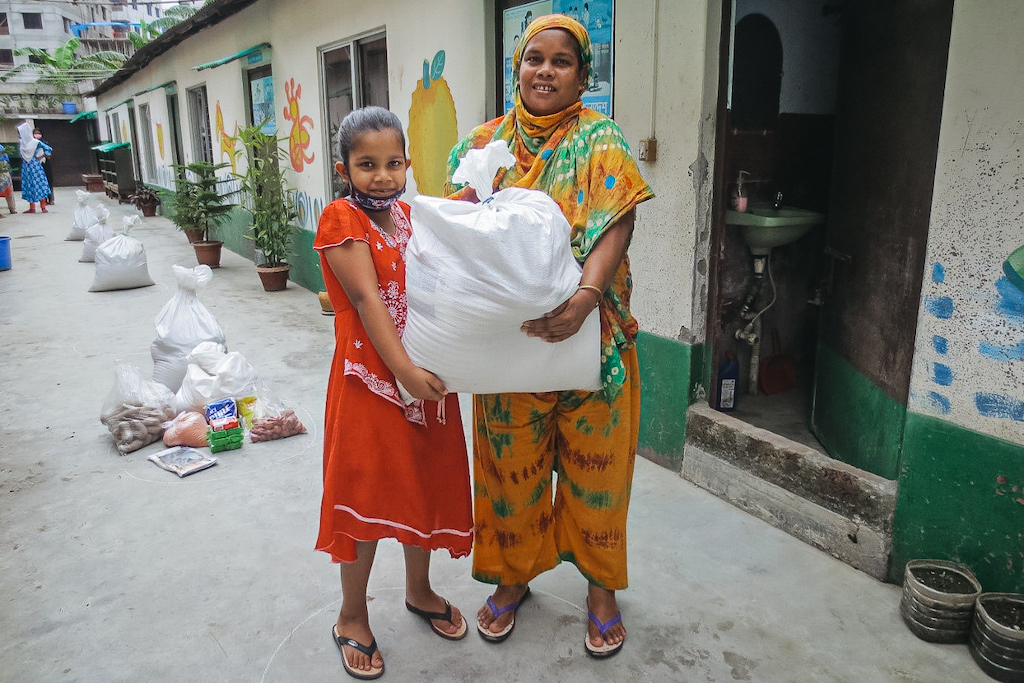 Mim and Khadiza pick up a food pack from their local Compassion centre.

On the day Khadiza and Mim went to the local Compassion partner to receive the first food pack, she shared a relieved and exhausted smile with Malancho, a staff member at Mim’s Compassion centre.

“All these days when my girls came to me hungry, as a mother I had to embarrassingly make an excuse and keep them busy to make them forget about their hunger. But not anymore,” Khadiza told Malancho.

Receiving food packs had given her a renewed sense of hope, in a time when her family’s precarious situation had left her fearful for their future.

‘I am saving my other half for tomorrow’

After three months, Farid recovered enough to get out of bed, though he still couldn’t lift weight like before. On the day he left his bed, he knew a celebration was in order. It had been so difficult for him to watch helplessly from his bed as his family suffered.

Farid went out and bought his girls’ favourite fish as a special treat for the family. Mim and Mariam were so excited, running up and down the alley waiting for him to return. 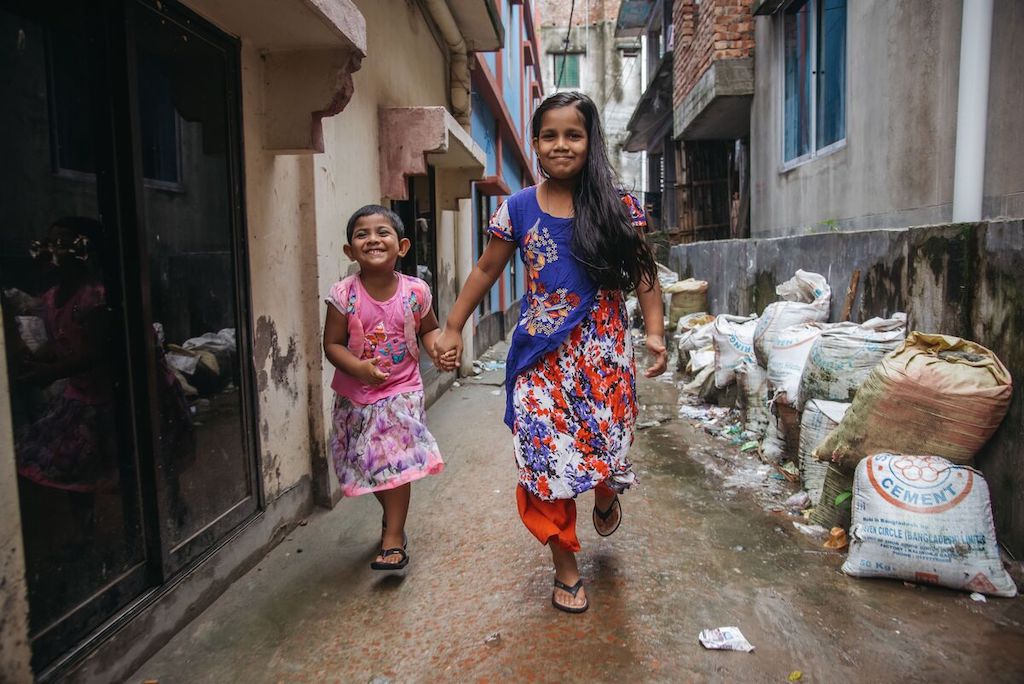 It was an amazing meal to share together after so many weeks, yet Mim was acting strange. A large piece of fish remained on her plate, uneaten.

“Mim, I thought you loved the fish,” her father asked, concerned.

“I love the fish,” Mim replied, “but I am saving my other half for tomorrow.”

Farid’s heart broke a little as he understood how the past few months had changed his daughter’s perspective. At the young age of eight, she was worried about tomorrow. But he was also touched by her concern. “My daughter’s concern for our family is truly a blessing from Almighty,” he says. 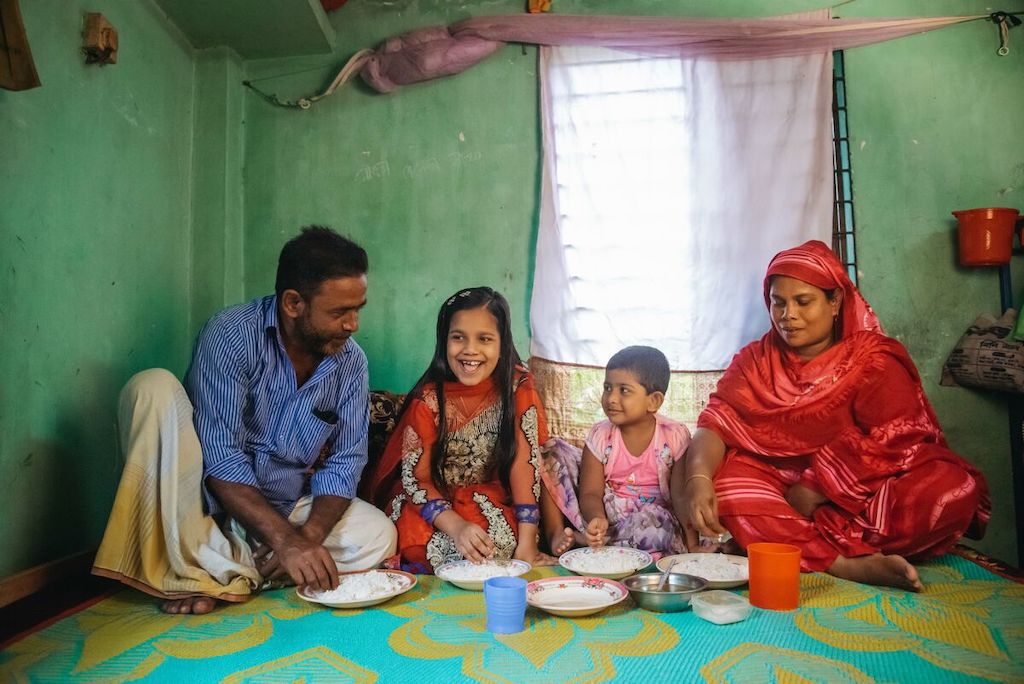 Mim’s family shares a meal together in their home.

Though millions of families in Bangladesh and around the world have been thrust into such uncertainty this year, Compassion’s local partners continue to work hard to ensure they are not alone, providing emergency food packs, as well as hygiene kits, rent support and emergency medical care as needed.

Hunger is making history this year. But so are we.

You can make hunger history in the lives of families like Mim’s.

Help us reach our Giving Tuesday goal of $160,000 to provide desperately needed food to families in need of immediate support.

Whatever it takes: Crossing the desert to bring food to the hungry