Isabela’s right leg has been amputated.

“Sometimes I dream I’m flying in the sky, touching the sky, just like a butterfly. I dream I’m in heaven playing with my friends, and we have fun,” she says. “There I can jump and play. But I also dream with the doctors who take care of me in the hospital. I still remember those days.”

Where the story begins 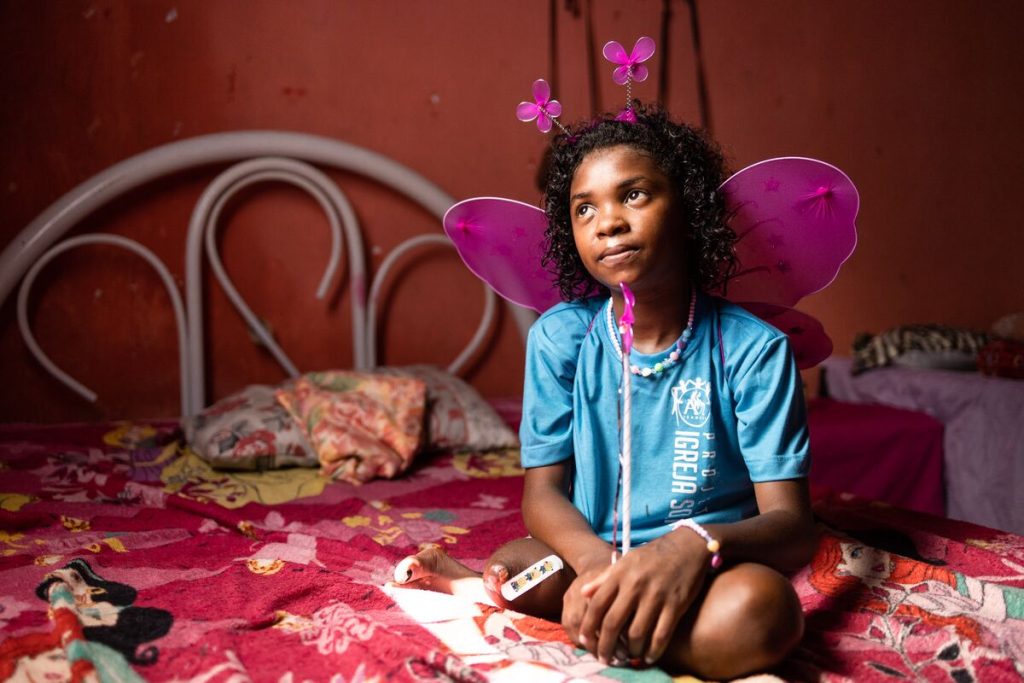 Isabela’s story begins in a desperate place. Her mother left her and her siblings with her grandparents and moved away. Isabela’s grandparents were already helping to care for some of her cousins, so resources were scarce. As recyclers, her grandparents spent their days collecting paper and other scrap materials they could sell for income to support the children. Meanwhile, Isabela and the other children were hungry. In the public market and at different houses, they would ask for food.

One day, as the children were searching for food, they happened to stop at the local church to ask for help. The pastor gave the children something to eat and spoke with Vilma, the director of the church’s Compassion centre. He asked Vilma what they could do to support this family.

“I visited Isabela’s family’s house, and I knew we needed to help the children. So, I registered Isabela and her two cousins at the Compassion centre some weeks later, but then they disappeared. I looked for them everywhere, at schools and hospitals, but I couldn’t find them,” says Vilma. 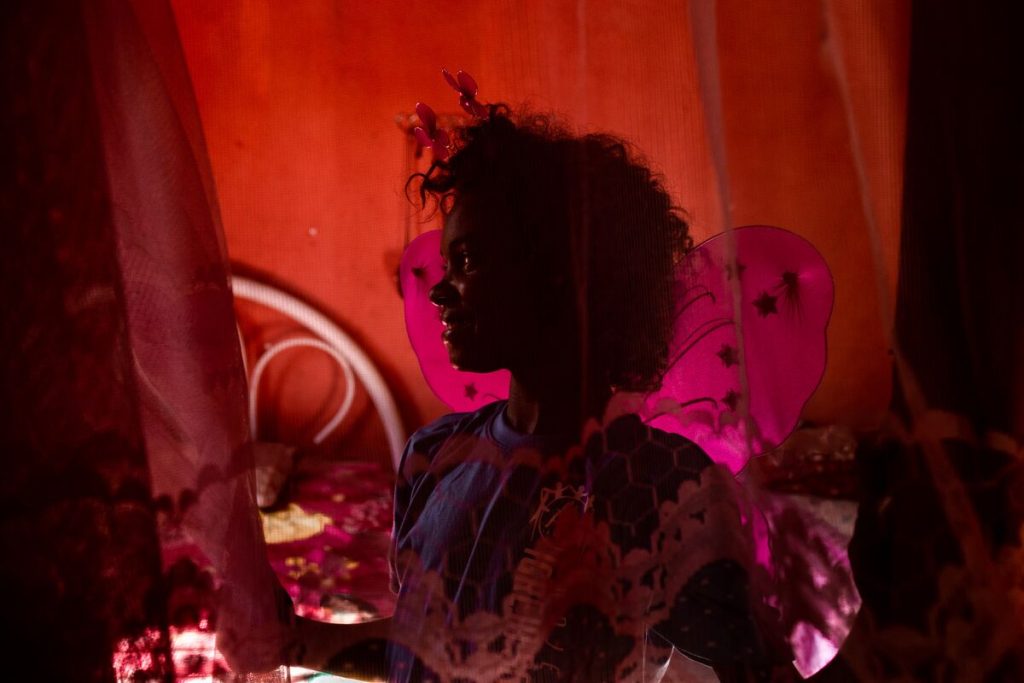 Isabela lived with 15 family members in a tiny two-bedroom home, sharing beds and sofas. However, with little money to pay the rent, the family was constantly moving out or being evicted.

Thankfully, God intervened. “One day, I was watching TV when I saw them asking for help on the local news. They were living in another neighbourhood. I was happy that I finally found them, and I went there to visit them again,” says Vilma.

However, when Vilma finally found them, she learned some bad news: Isabela was in the hospital.

The accident that changed her life 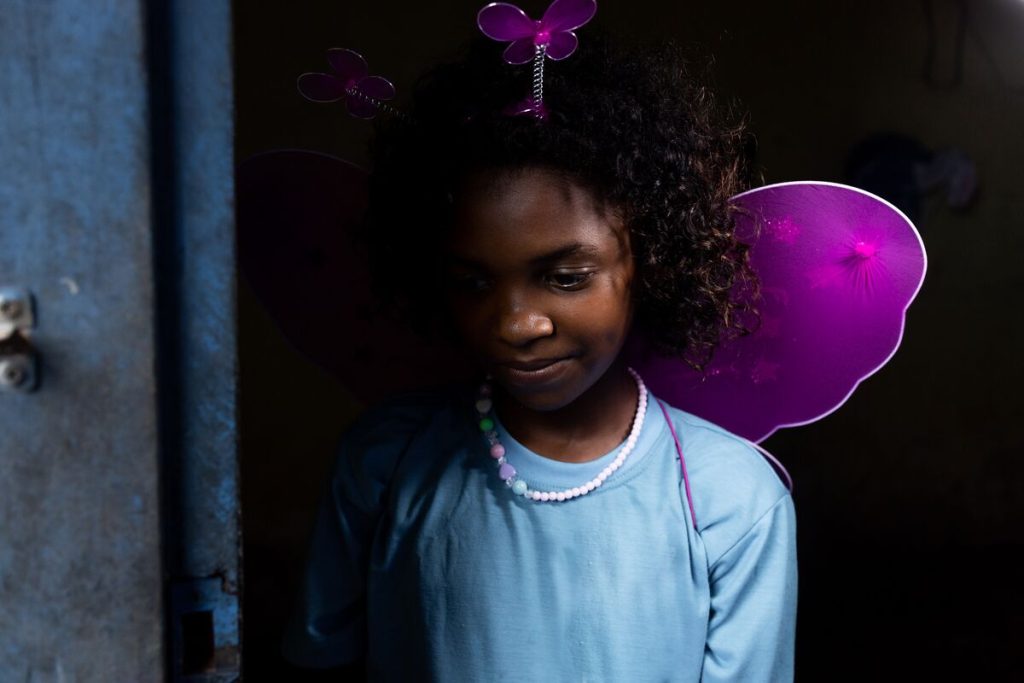 Two weeks earlier, just before she turned nine years old, Isabela was hit by a truck. Her mother was visiting the family and asked her to fetch her stepfather, who was working in another neighbourhood. To get there, Isabela had to cross a highway.

She nervously approached the highway, watching as vehicles zoomed past. The noise and speed of the traffic were disorienting, but nevertheless, she felt she had to get to the other side. She stood there assessing her best route across and finally made an attempt to cross among the cars.

But she didn’t see the truck until it was too late.

Isabela was rushed to the local emergency hospital where she was hospitalized for about 15 days. Her leg had been badly injured. She needed to be transferred to another hospital in the region, where she remained for almost two more months.

“Isabela’s leg situation was very complicated, and she had to be transferred again to a hospital in São Luís, a city 250 kilometers from her home. In São Luís, the doctors decided to perform a skin graft on Isabela’s leg to save her leg. After three months of recovering, she could finally come back home,” says Vilma, centre director. 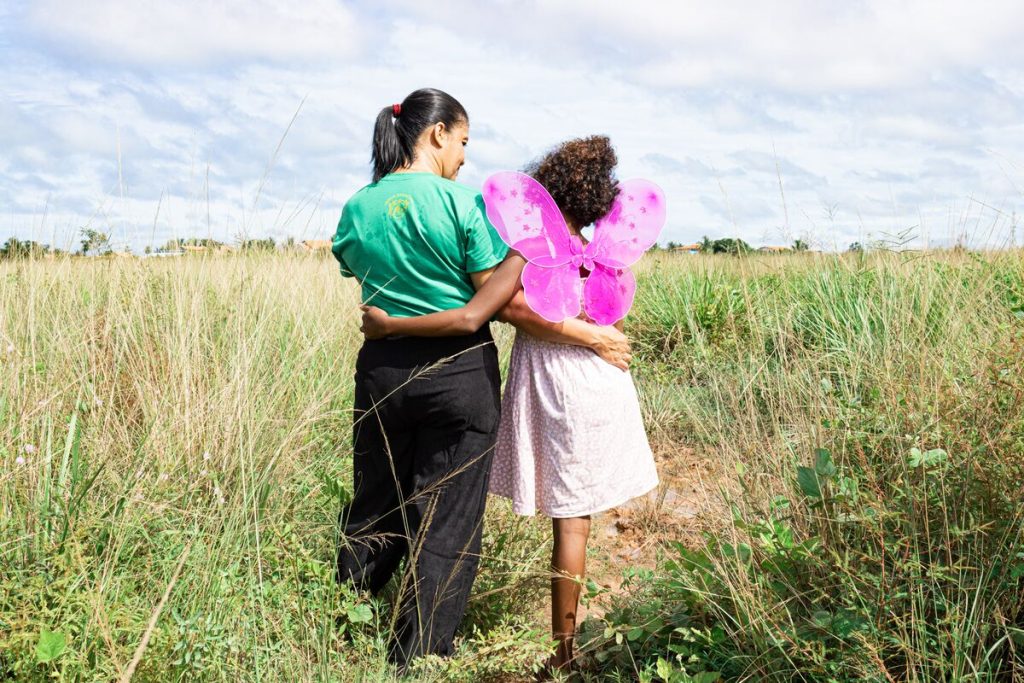 However, when Isabela returned to her home, her leg became infected due to the crowded conditions of her home and the family’s lack of resources.

“On my visits to Isabela’s house, I always talked to the family about the importance of taking care of Isabela’s leg and changing the bandages three times a day. But they told me that they didn’t have the necessary materials to do it. So, I started to get gauze and bandage products every day at the hospital and take them to her house,” says Vilma.

The pandemic made it difficult for the centre staff to supervise the care of Isabela’s leg, but Vilma persisted in visiting the family and taking Isabela to the hospital to change her bandages. However, her leg didn’t seem to improve.

“Isabella’s situation was very serious. I often took her to the hospital, and she was always hospitalized for weeks, recovering. We also paid special attention to her food so that her body reacted better to the treatments. She coped with many treatments and hospitalizations over almost two years,” says Vilma. 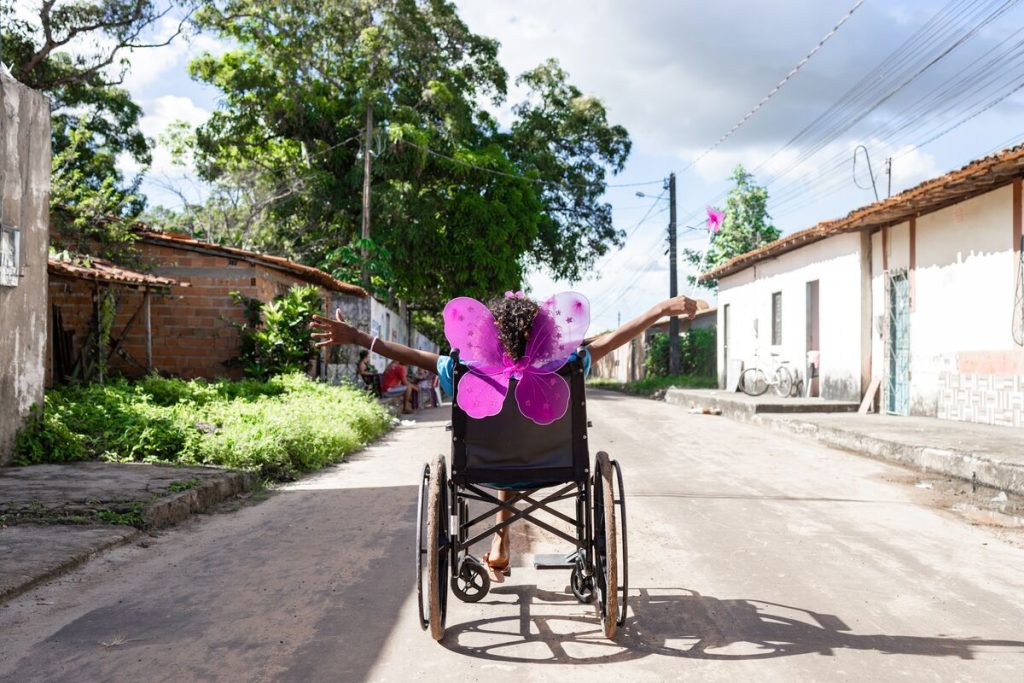 Despite the centre’s support, Isabela’s leg got worse. Over time, her knee began to bend, and she could no longer put her foot on the ground.

“The other children on the street always called me ‘broken leg’ or ‘rotten leg’. I was upset. I started to cry. Aunt Vilma always took me to the hospital and there the nurses took care of me,” says Isabela. After a year and a half and many hospital trips, Vilma took Isabela for a more complete analysis. She requested more complex tests that could hopefully provide more effective treatment options.

However, the doctors’ conclusions were not positive. 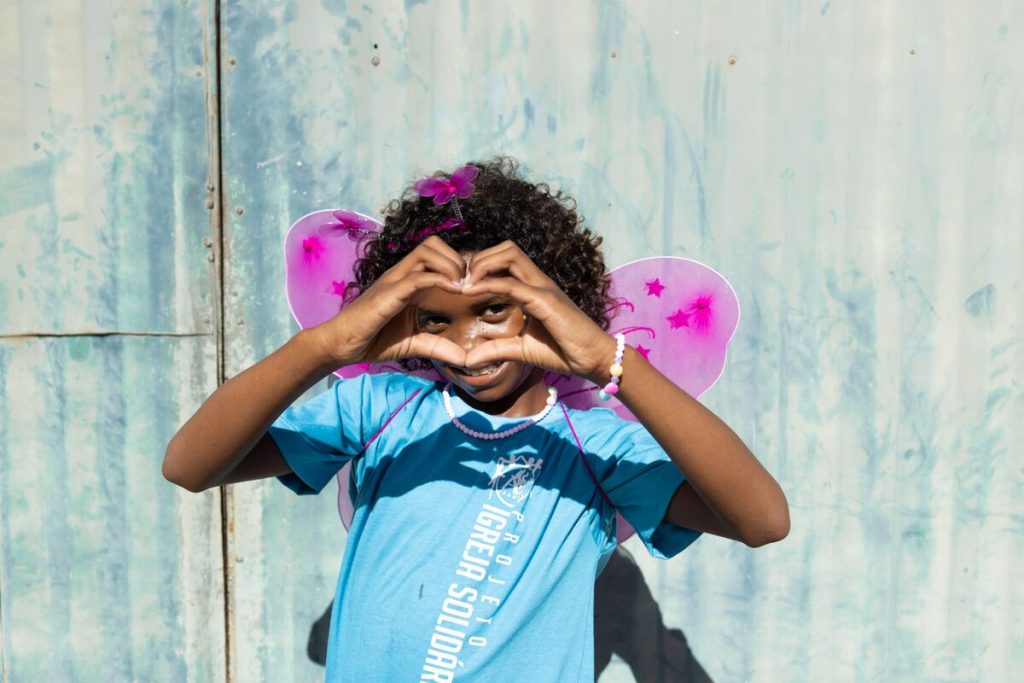 “I was in the room with my grandmother when I heard the doctor talk to her and say they will have to cut [my] leg and we need to schedule a date for the surgery,” says Isabela. “I felt so scared.”

Isabela’s body had rejected the skin graft and deformed the bone. The doctors concluded there was nothing they could do to save the 11-year-old’s leg. To prevent her from having worse complications in the rest of her body, the only alternative was to amputate.

When Vilma heard the devastating news, she mobilized the Compassion volunteers to assist the young girl throughout her hospital stay. She also organized additional support through Compassion’s Urgent Needs fund. The generous donations to this fund are used by Compassion centres to support children in situations of extreme vulnerability. Although almost all children in poverty live in harsh contexts, some face even more troubling challenges. Like Isabela.

“Whenever we notice cases of highly vulnerable children, we seek to intervene more directly in the family’s environment to improve the child’s life. In addition, we have partnerships with other organizations in the child support network, such as schools, hospitals, psychologists, and social services,” says Vilma. 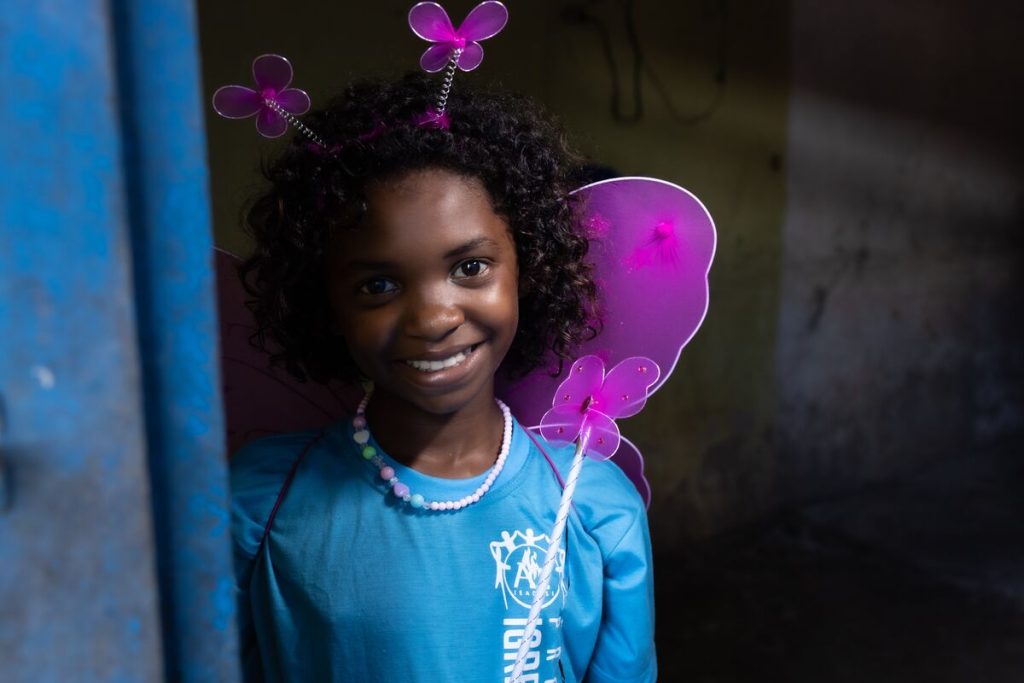 “In Isabela’s case, the family context with numerous people living in the same house, the lack of resources, the absence of her parents, and her leg damage made her a highly vulnerable child.”

After the surgery, Isabela spent about 20 days in the hospital. Compassion volunteers from her centre visited her almost every day to bring her school and Compassion homework, and even toys for her to play with.

“The centre’s ‘aunts’ are really nice. They always visited me and brought me cool things to do at the hospital. I missed the centre a lot while I was in the hospital. It’s my favourite place in the world. I never want to leave when I am there,” says Isabela. 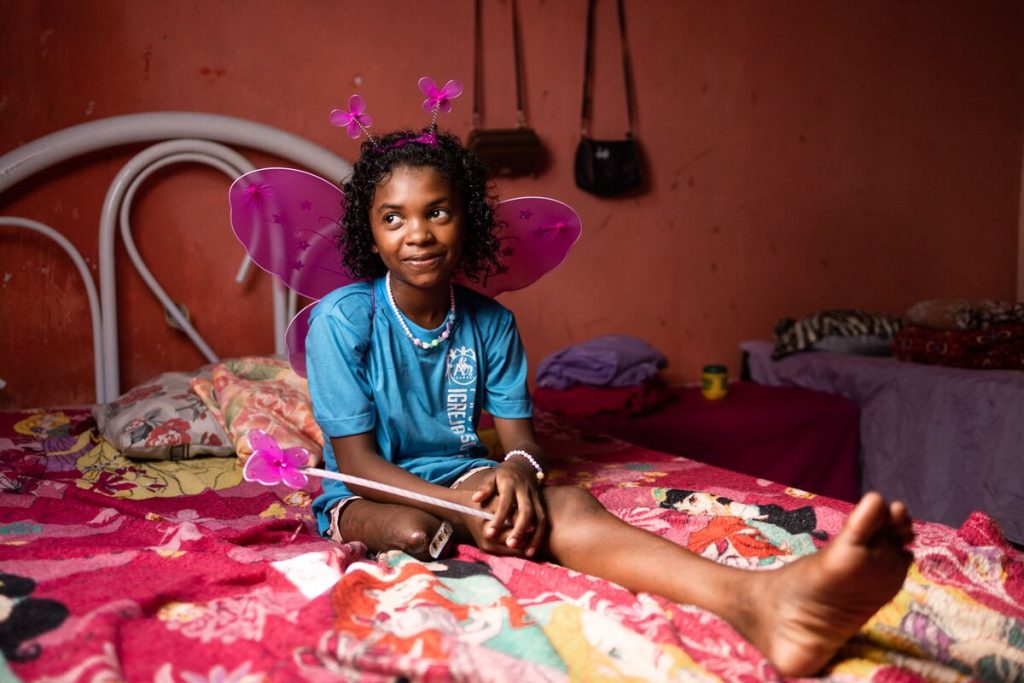 Through the Urgent Needs fund the centre brought a bed, a mattress, a fan, a wheelchair and additional food for Isabela. To prevent her surgical stitches from getting infected and to provide a more comfortable environment for her recovery, the centre rented a house for Isabela to recuperate in with two of her family members.

“We did everything to ensure that Isabela would have a comfortable place to recover from the surgery. Unfortunately, her grandparents’ house was too crowded, and she slept on an old sofa. After Isabela returned home, I took responsibility for taking her every day to a clinic that took care of dressing her surgical stitches,” says Vilma.

Before leaving the hospital, Isabel received many gifts from the nurses and doctors’ team, as almost the entire city had learned about her story. Receiving so much affection and gifts lifted her spirits. Still, sometimes her smile also hides her sadness about not being able to do the same things as she could before. 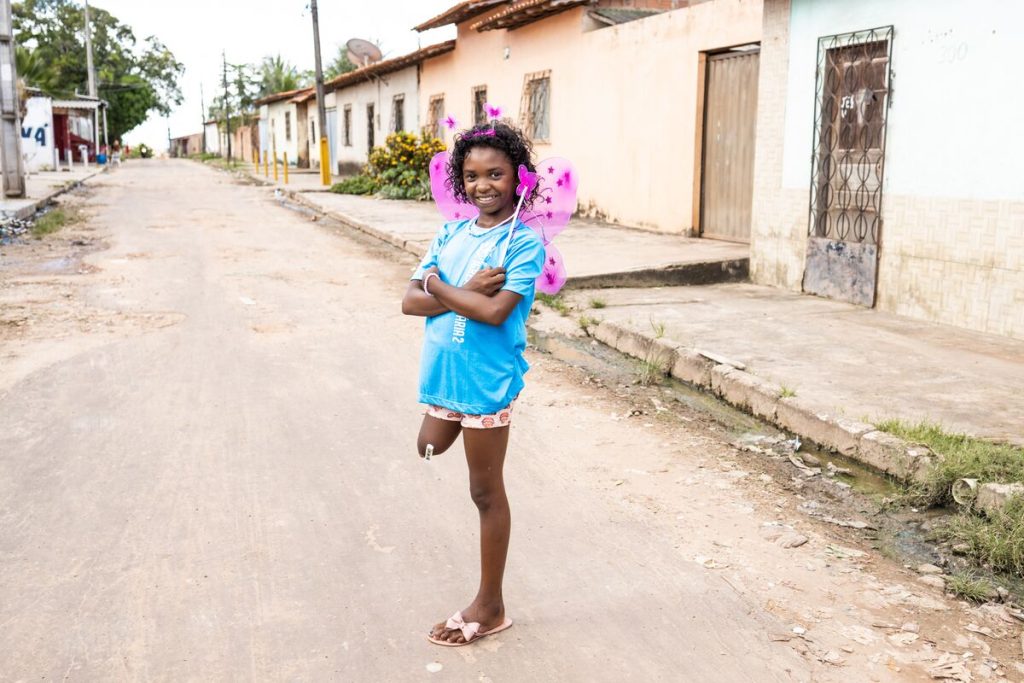 “Not having my leg makes me sad sometimes, and I want it back. Now I can’t leave the house like I used to or play with my friends like I once did. Sometimes my friends go too far ahead and I can’t follow them if someone doesn’t take me. But my best friend cried a lot when she saw me after the surgery because I was missing my leg. She always plays with me and doesn’t leave me alone,” says Isabela.

A dream with wings

Anyone who knows Isabela will undoubtedly see a happy child who is always playing and looking for adventures, even after surgery. One of her favourite hobbies is collecting flowers and playing with butterflies, even if it’s a bit harder to chase them now.

“I love butterflies. I like to chase them and see them land on my finger. They are so beautiful,” she says. “Now it’s not so easy to jump after them because of my leg. I wish I were like them. Then I could fly anywhere, just like in my dreams.” 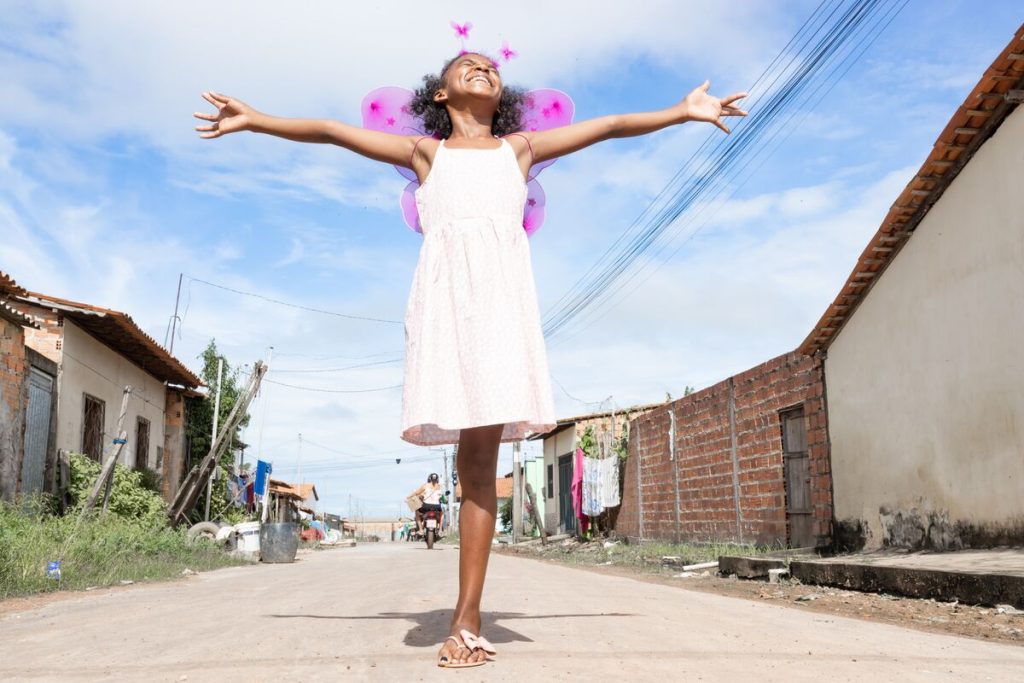 But despite Isabela’s physical limitations, she knows all is not lost. She knows she has grandparents who love her. She has learned of the kindness of the doctors and nurses who cared for her. And she has come to know she has a loving team of people at her Compassion centre who are dedicated to ensuring she is known, loved, and protected no matter what life may bring. This has given wings to a new dream in her heart.

“When I was in the hospital, the nurses and the doctors took care of me. They help to heal me. That’s why I also want to be a doctor when I grow up,” she says.

Just like a butterfly symbolizes transformation—a process of change leading to beautiful new wings—Isabela has her own story of transformation. Her story transformed from desperation to hope. 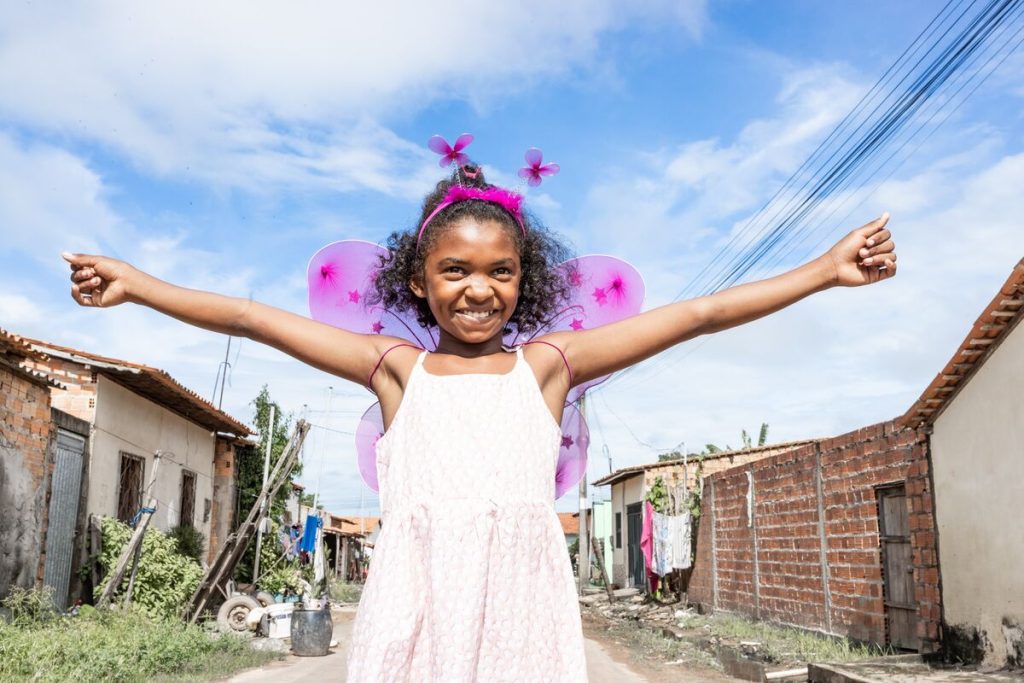 You can be a part of transforming tragedy into a story of hope.

Donating to Compassion’s Urgent Needs fund makes a difference for kids like Isabela.

Part One: Protecting what matters