Every kid dreams of who they want to be, things they want to accomplish, places they want to go, and more. But for millions of children living in extreme poverty, this is when poverty’s evil lies start to creep in.

Kids in the Compassion program know better. With the support of their family, community, Compassion centre and sponsor, they are doing things that have never been done before in their families: pursuing higher education, securing formal employment and gaining access to better medical care. 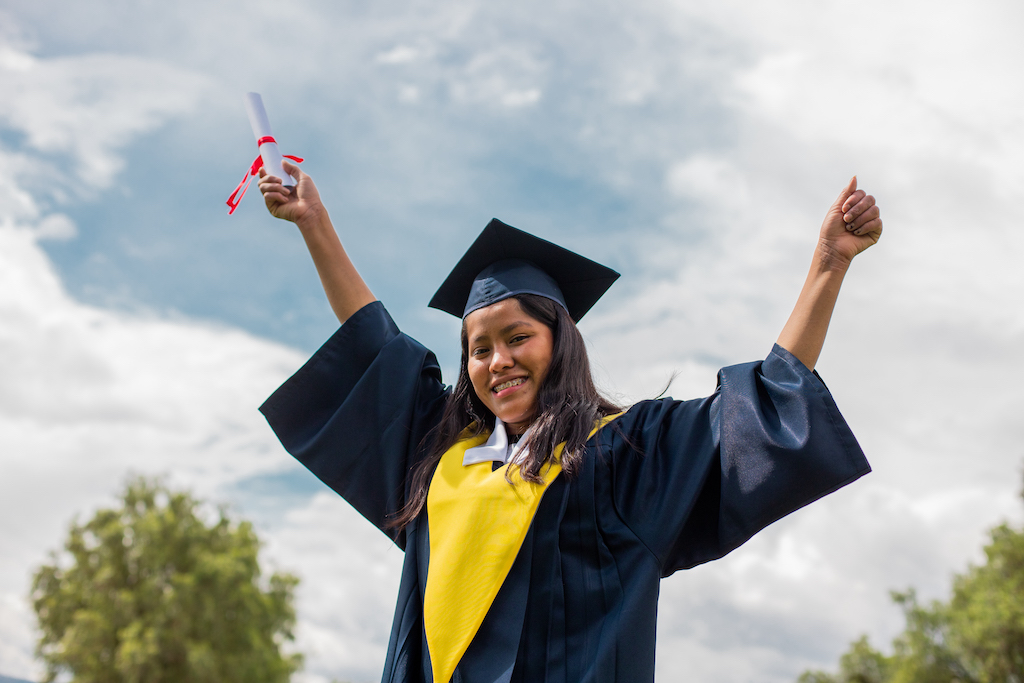 Maribel suffered many hardships and violence as a child. Her mother abandoned her when she was young, and her father’s new wife was abusive and forced Maribel to work at her store. Between the work she was forced to do and the struggle of living in a broken home, Maribel considered dropping out of school. But her Compassion centre wouldn’t have it. They worked to stop the abuse and encouraged and supported Maribel as she continued her education.

When she was 14, Maribel moved to the city with her great aunt. She finally had a safe and supportive home and family. However, in the city, the standard of education was much higher and she struggled to keep up. She considered dropping out again. Once again, it was her tutor at the Compassion centre that encouraged her to keep going.

“Besides my great aunt—whom I call Mom—and my aunts, I found support in the Compassion centre,” Maribel says. “My tutor always advised me and encouraged me I would do better. He was always raising my spirit so I wouldn’t give up.”

Today, Maribel is the first in her family to graduate high school and is studying to become an assistant nurse. She hopes to one day become a surgical technician.

First to be computer literate 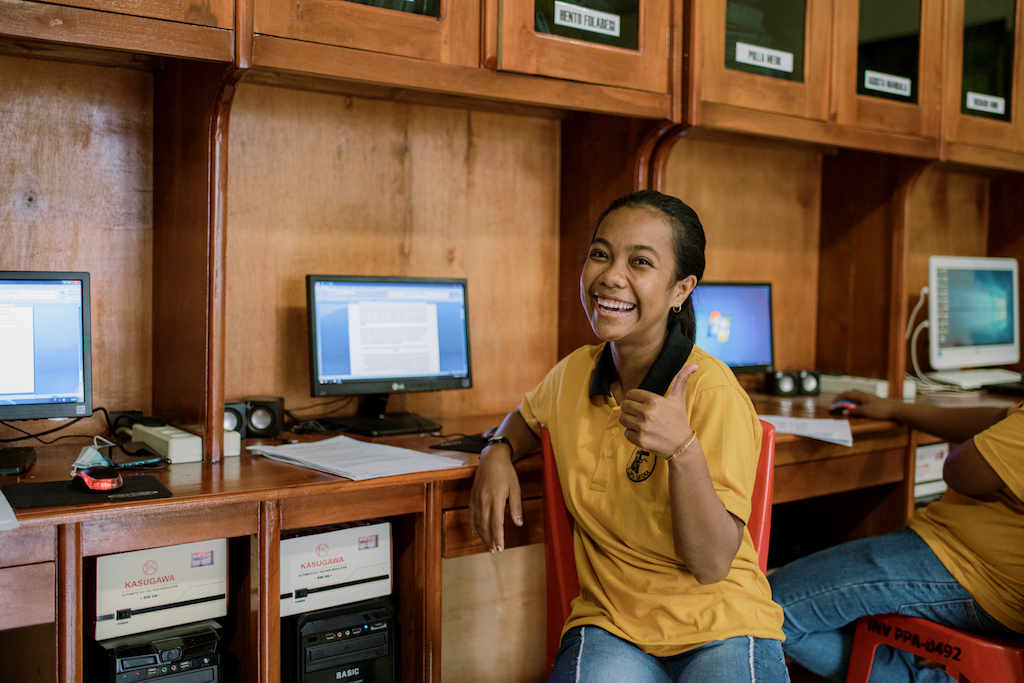 At her local public school, Inggrid learns about using a computer… without a computer anywhere in sight. The school teaches it all in theory, expecting students to gain their own access to a computer to practice. But as poor farmers, Inggrid’s family barely has enough to put food on the table, let alone buy a computer.

Thankfully, there is a computer lab at Inggrid’s Compassion centre, where she’s able to practice her computer skills and gain access to hands-on workshops for things like Microsoft Word and Excel and photo editing.

First to have a formal job 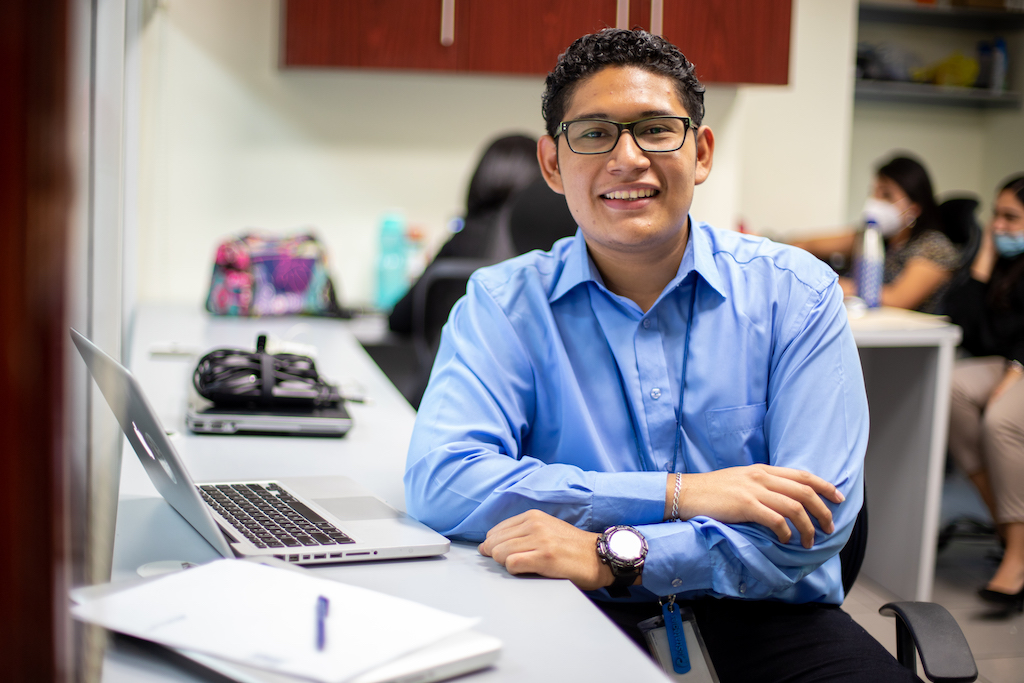 Growing up in an infamously dangerous community in El Salvador, there was little for Kevin to dream of other than joining a local gang or being crippled in debt like his parents. But an experience at his Compassion centre changed all that.

“When I was a child, the centre made an activity where all the staff dressed up as different professions,” Kevin shares with a smile. “Since that day, I began to dream of being a professional in the future.”

With guidance from staff at his Compassion centre, Kevin decided to pursue a career in IT. It wasn’t an easy journey—filled with judgement and misunderstanding from both his colleagues and community. “I remember some people at work judging me because of my modest way of dressing,” Kevin says. “In the neighborhood, someone said hurtful comments about my career because they didn’t believe that you could stay in front of a computer working without wasting your time.”

But Kevin has persevered. He’s already been promoted by his company twice and is thankful to be able to help his parents pay down their debt that has burdened them for years. He is the first in his family to have a formal job. 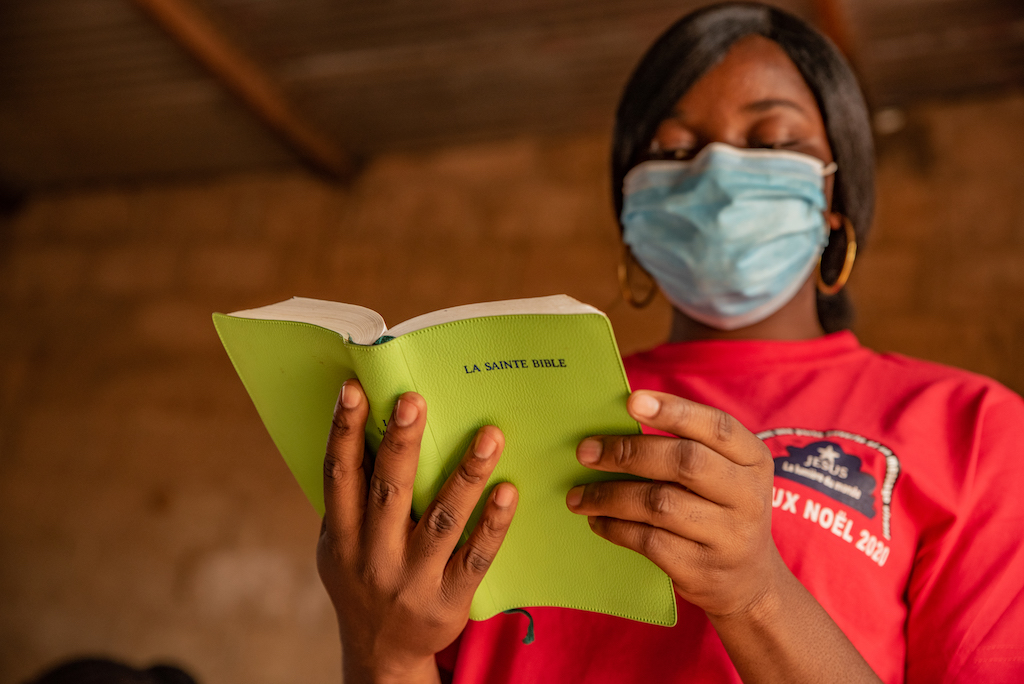 Rainatou did not grow up with followers of Jesus around her—except at her Compassion centre, where she first learned about God’s love.

In 2010, she made the decision to follow Jesus while at Bible camp. She is the first Christian in her family. Since becoming a Christian, she has had to overcome challenges to live out her faith both at home and in the community.

“My friends started to call me ‘pastor’. This was a burden and a huge responsibility for a child, but it mirrored my behavior and interaction with people. I also had to convince my parents through respect and obedience before they allowed me to attend church services,” Rainatou says.

Today, Rainatou is 21 years old and continues to impact her community through her faith. “My parents have become more supportive and they even share their prayer requests with me asking me to pray to my God for them.” Rainatou also leads Bible studies at her church and at her university through the Christian students’ Bible group.

First birth in a hospital

Saida and Salome, 17 and one month, Bolivia 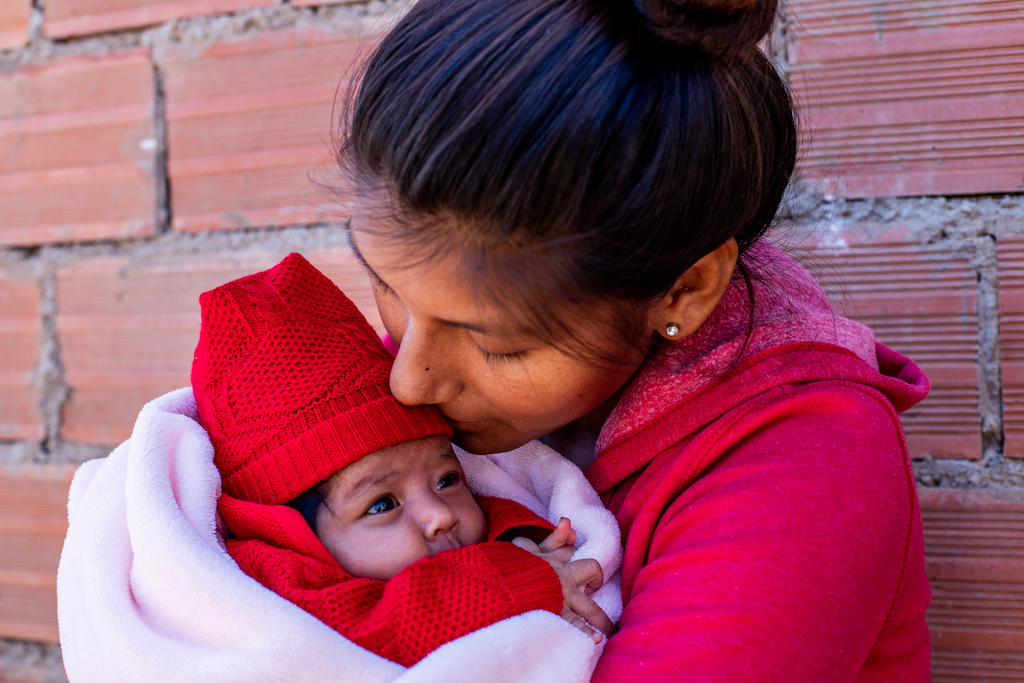 As a single teenage mother, the outlook was not good for Saida when she discovered she was pregnant. Add to that the fact that her family is extremely poor and as a result, she would lack the access to quality healthcare in order to safely give birth. Previously, all the people in Saida’s family had given birth at home. Saida seriously considered ending the pregnancy or giving the baby up for adoption.

All of that changed when she was registered in a Compassion Survival program at a local church. Saida received all the support she needed emotionally, spiritually and physically. Compassion staff encouraged her to visit a doctor and enabled her to do so.

When her labour pains started, Saida had to visit three hospitals before one had space to take her, partly due to the COVID-19 pandemic. Thankfully, everything went smoothly. “We were well taken care of. I had a risky pregnancy, and professionals supported me,” she says.

Today, she joyfully holds baby Salome in her arms. They share a special bond: the first birth in their family to happen at a hospital.

They will continue to have the support of the Compassion program. “If I hadn’t been in the program, I would have probably given my baby away, but thanks to them, I decided to keep her, and she is my daily happiness,” Saida says. “Now my dream is to finish school and then become a lawyer or a nurse. I also want my baby to study and have a good life.”

First to have running water 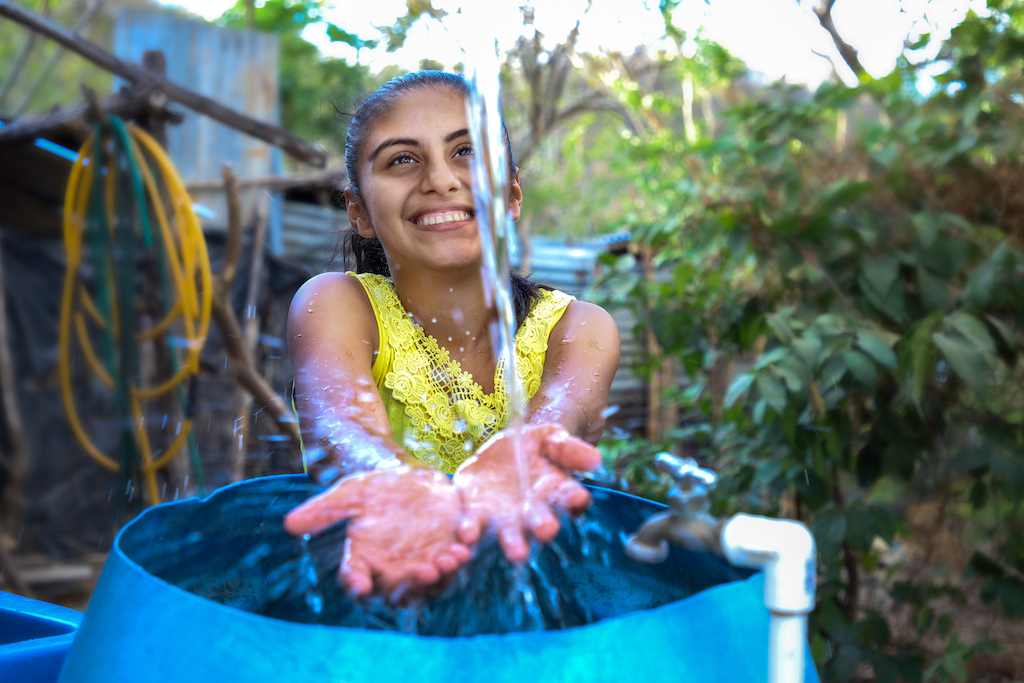 Katheryn and her mother Rosa live in a remote area at the top of a hill. The closest water source used to be the town’s well, a 30-minute walk away. In order to do anything involving water, whether bathing, cooking, washing clothes or dishes, Katheryn had to make the trek to the well with supplies to complete the task, or to collect water to haul back up the hill. It was not an ideal situation for this mother-daughter pair, especially when it came to needing to bathe.

Knowing about their situation, Katheryn’s Compassion centre stepped in to provide the $300 needed to get running water to Katheryn’s home. This was especially important in the face of the pandemic, when handwashing became paramount to health and safety.

“We are delighted having water at home. I thought having running water was something impossible,” says Katheryn. “Having water is fantastic. It saves us time, letting us cook and keep our house cleaner.” 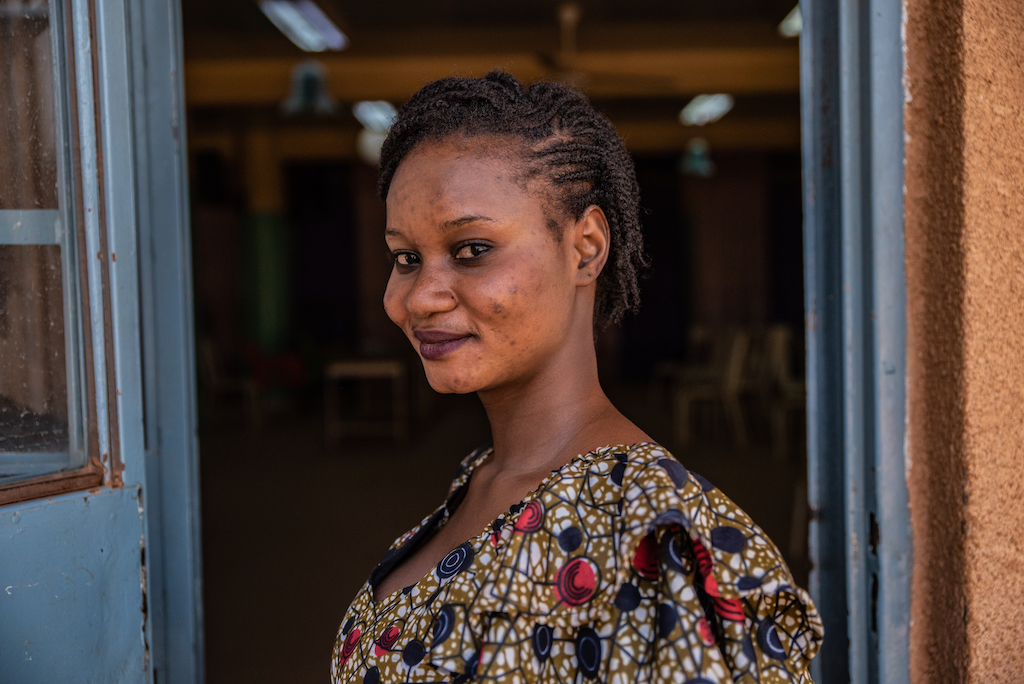 In Burkina Faso, many children do not have the opportunity to go to school due to lack of finances. However for Fatoumata, the support of her Compassion centre has made for a different future.

“I have been granted top-up school fees, books, tutoring and counselling from [Compassion],” Fatoumata says. As she grew up, she watched her friends who weren’t part of Compassion’s program drop out of school to marry.

But the provision and encouragement from her Compassion centre meant she continued to stay focused and study hard. She strived for excellence and scored good marks in her final exams. Her commitment to succeed and her tireless efforts to overcome poverty contributed to an outstanding milestone: she was accepted into university to undertake a Communication Studies degree.

“I am blessed to be the very first in my family to attend university and I trust that my five younger siblings will follow my steps. The centre has done so much for me and I am full of gratitude.”

Today, the 21-year-old is in her second year of studies. She is passionate about seeing other young women rise above their circumstances to become all that they can be.

Are you the first in your family to do something? Share in the comments!

‘We are at a critical juncture in human history’: 5 ways to take action towards the UN Sustainable Development Goals