In many ways, Levi is your average 12-year-old Salvadoran boy. He adores soccer. He spends his free time kicking a soccer ball around the cement court behind his Compassion centre. He loves learning new languages and playing with his friends.

But in other ways, his life is anything but ordinary. 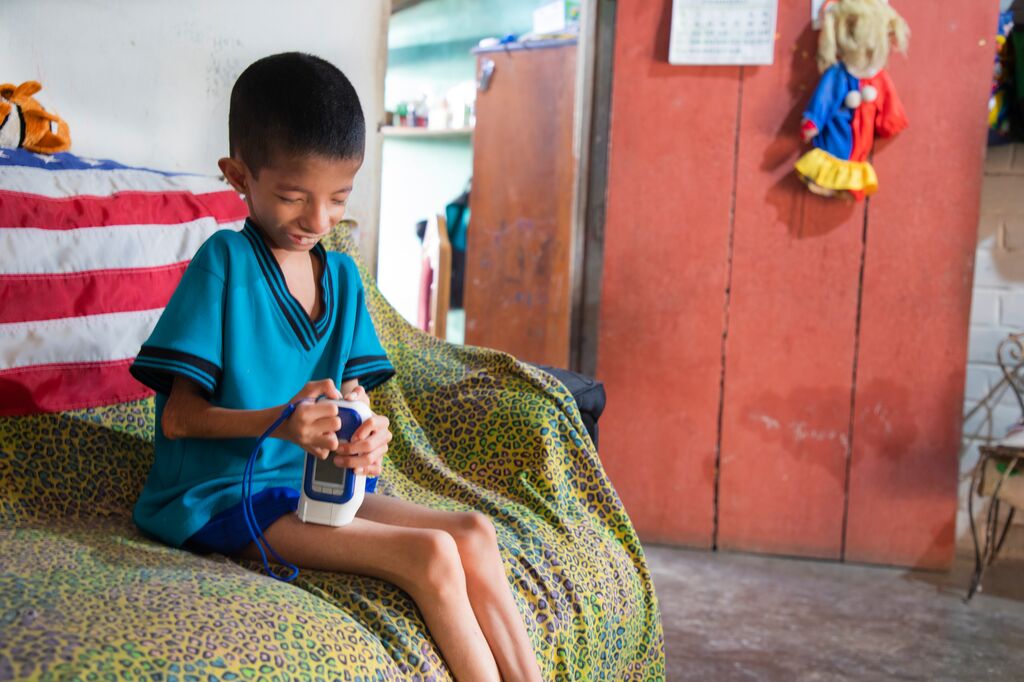 While other kids his age brush their teeth before bed, Levi rolls up his pant leg and injects himself with his daily growth hormone to make sure he stays healthy. While his friends simply eat what they are given, Levi pays special attention to the amount of calcium and nutrients he is taking in with each meal.

His life isn’t without its challenges. But then again, for Levi, it’s never been easy.

Born with a rare condition

During a routine pregnancy checkup one day, the doctors found something alarming when they ran tests for Dulce Maria, Levi’s mother: her baby wasn’t growing at the expected rate. In fact, his development was two months behind where it should be. But there was nothing she could do except wait until his arrival.

At birth, baby Levi was tiny. After two months of medical check-ups and specialist appointments, she had an answer. 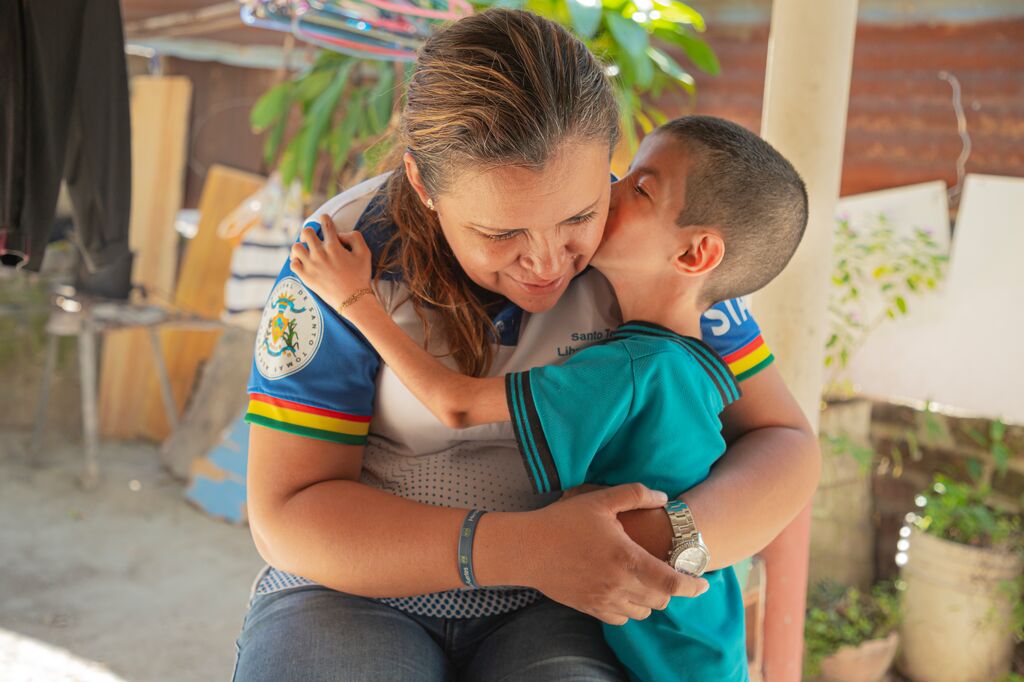 Levi with his mom, Dulce Maria.

“Finally, they diagnosed my son with Russell-Silver syndrome, giving him six months of life. They told me there is no cure for that disease. That was very hard,” Dulce Maria says.

Despite the doctor’s grim prognosis, Levi defied the odds.

Though he was underweight and struggled to feed, he passed six months old and continued to grow. Quickly, Levi grew into a toddler and even quicker, a school-aged child, surviving on soft foods and liquids. 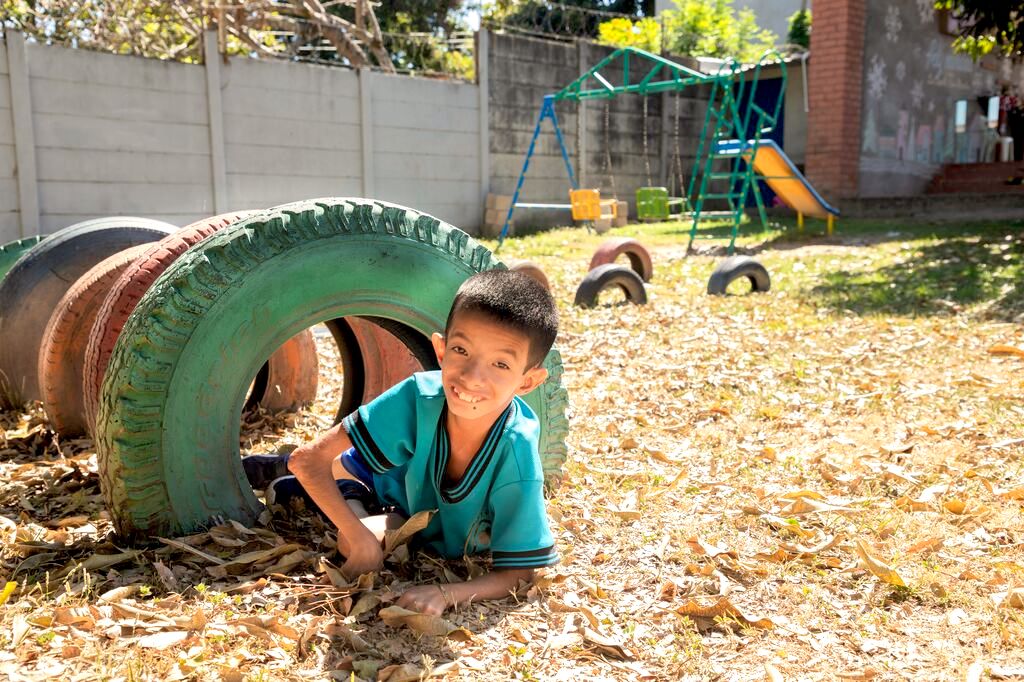 But on the playground, Levi’s fragile appearance made his teachers and peers treat him cautiously.

“The first years of school were difficult. Levi was shy, and his teacher and kids treated him differently. They did not allow him to do all the activities that the other children do because they are afraid to hurt him. That affected his character,” says Dulce Maria.

An inclusive place to thrive

Everything changed for Levi when he turned eight.

When a local church in his neighbourhood partnered with Compassion to start a child development centre, Levi was registered right away.

To his joy, he found in the Compassion centre everything he needed: an inclusive environment where he was unconditionally loved and accepted by volunteers and other children. He woke up each day excited to make new friends, learn about God and the world around him. 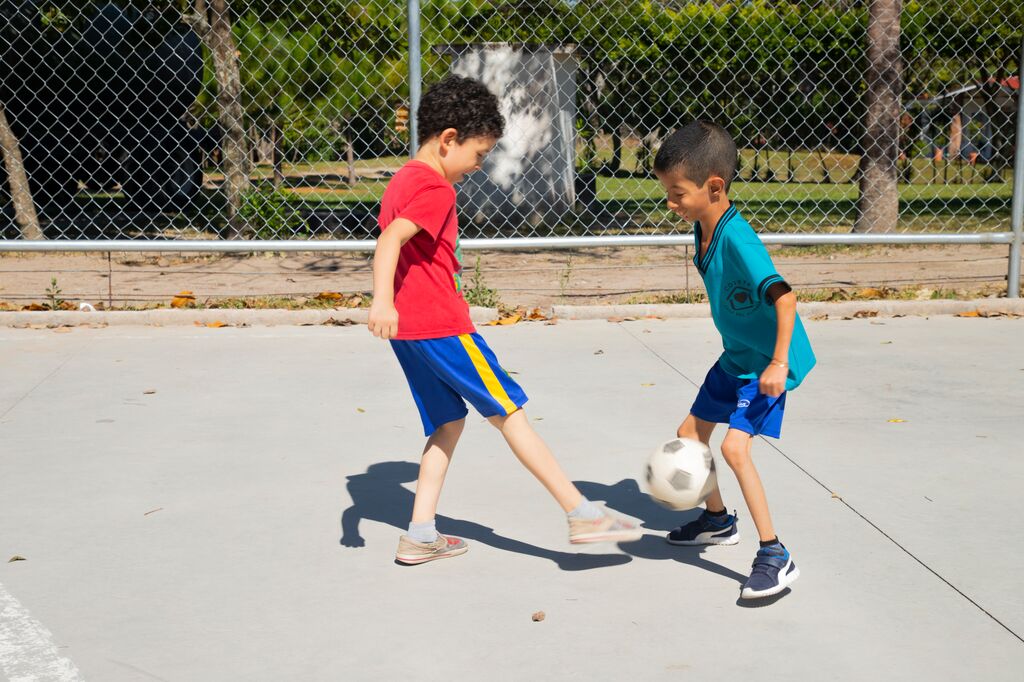 “I like to attend the Compassion centre and play soccer with my friends. My favourite class is English because we dance and sing as we learn the vocabulary,” he says.

To ensure he was getting all the specific calcium and nutrients he needed to stay healthy, the staff at Levi’s Compassion centre also placed him on a special nutritional program. His family received food packages and education to ensure Levi was eating a nutritional diet, and when he came to the centre, he was given multivitamins and protein-rich foods. 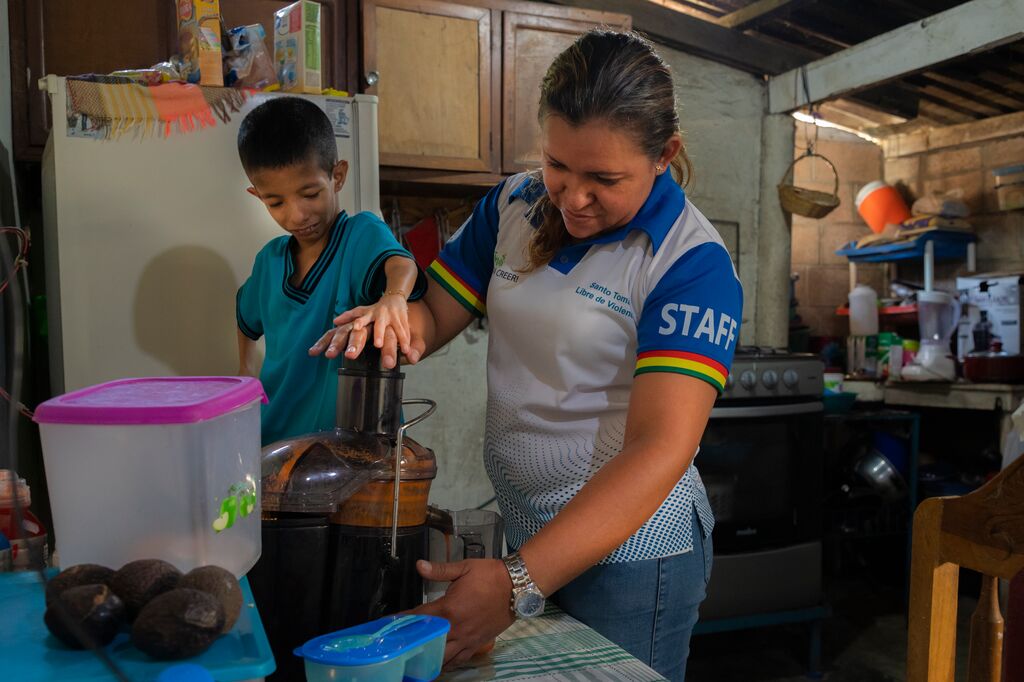 Levi and Dulce Maria make nutrient-rich juice with a juicer bought with a financial gift from Levi’s sponsors.

During a routine medical check-up one day, Levi’s doctor shared with him some exciting news: he had a medical solution that would help improve Levi’s quality of life and help him grow. The treatment would require daily injections of human growth hormone and would improve his motor development, appetite, reduce the risk of hypoglycemia and increase his height.

The only problem? It would cost his mother nearly CAD $700 a month for five years.

Though the treatment sounded promising, Dulce Maria knew the expense would put it out of her family’s reach. As a single mother earning the minimum wage as a police officer, the possibility of obtaining the treatment seemed impossible.

But she couldn’t disappoint her son. So, Dulce Maria began to pray.

An answer to prayer

“When I heard about the hormone treatment, I felt sad and disappointed because the price of the hormone was out of reach, out of my budget. I started praying to God, asking Him to open doors to be able to obtain the funds to finance the treatment,” she says.

And so, Dulce Maria met with Levi’s Compassion centre director and staff to put together an application to access Compassion’s Urgent Needs Medical fund. To their joy, nearly CAD $26,000 was granted so Levi could access the monthly treatment. 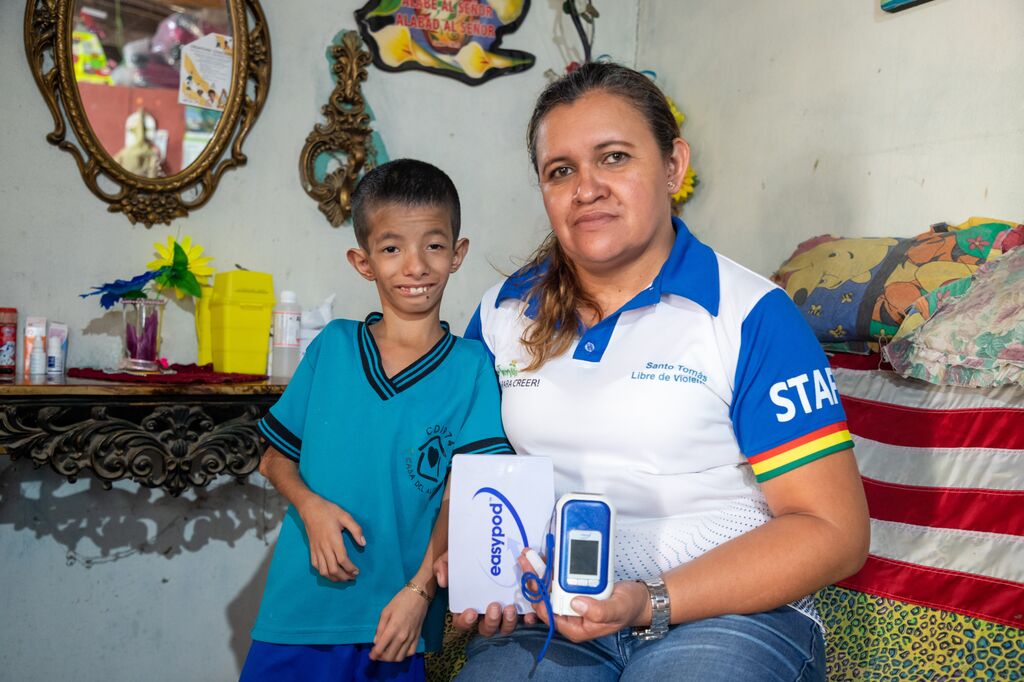 “To us, Levi is a child without limits. Now his condition does not cause him to live differently, he lives day by day like any other child. He enjoys sharing with children of his age group. They care, respect and treat him as equal,” says Morena, the Compassion centre director.

“At the Compassion centre, I feel cared for and protected,” says Levi. “There, I learn more about God. My favourite Bible story is when Moses shares the Ten Commandments. ‘Thou shalt not kill, not steal and not have any strange gods before Me’,” he recites.

After three months of treatment, Levi has grown one precious centimetre!

“I feel so good with my growth progress. Now I can look more like a regular child. At school, I always look to be the master of ceremony where I recite the pledge of allegiance to the flag or share my homework. I like to express myself with others and show that I can be myself in public,” he says.

At the Compassion centre, he inspires the other children with his joy and attitude that there is no challenge he cannot reach—not to mention his soccer abilities. 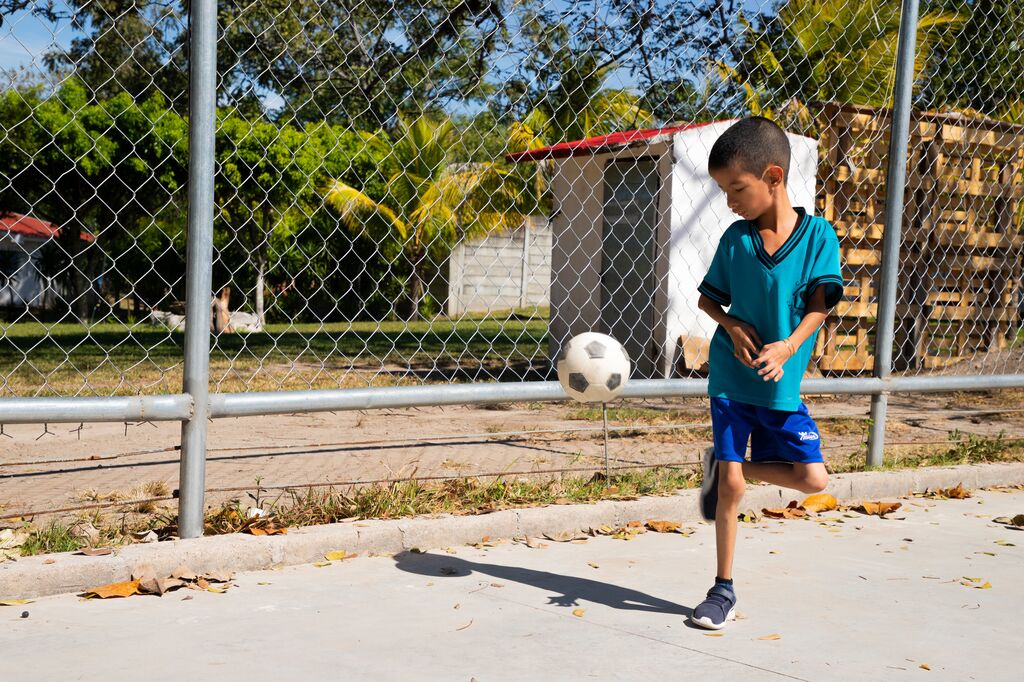 “The family is thankful for Compassion and the church because they feel part of us here. They are included, whereas in other places, they are excluded. We saw Levi as a child who can do every activity without a problem. We always consider him, and we have witnessed his emotional and physical growth,” says Morena.

Even though people in the streets still stare when he walks by, Levi knows that God doesn’t place limits on His children—He makes each of us unique for His perfect plan. He understands his value in God’s eyes and loves his sponsor’s letters, where he finds encouragement and spiritual direction. And he always walks into his Compassion with his shoulders back and his head held high.

Like Levi, each child in Compassion’s care is uniquely treated and cared for based on their own unique needs. You can help a child just like him feel seen, known and loved today.