There she stands, daringly in a uniform rarely worn by a woman—one hand behind her back, one firmly by her head. In her eyes there is a flicker of hope for the change that is about to come. For the history she is making. A smile curls from her lips—she is a change maker.

This is Miriam. She is a 21-year-old Compassion alumna, wife and mother-of-one living in the Kwale region of Kenya. She is also part of the 10% of Kenya’s Police Service that is female.

Her career choice is a radical one, not only because her gender is grossly underrepresented within it, but because of the deep history of police brutality and corruption in her country. 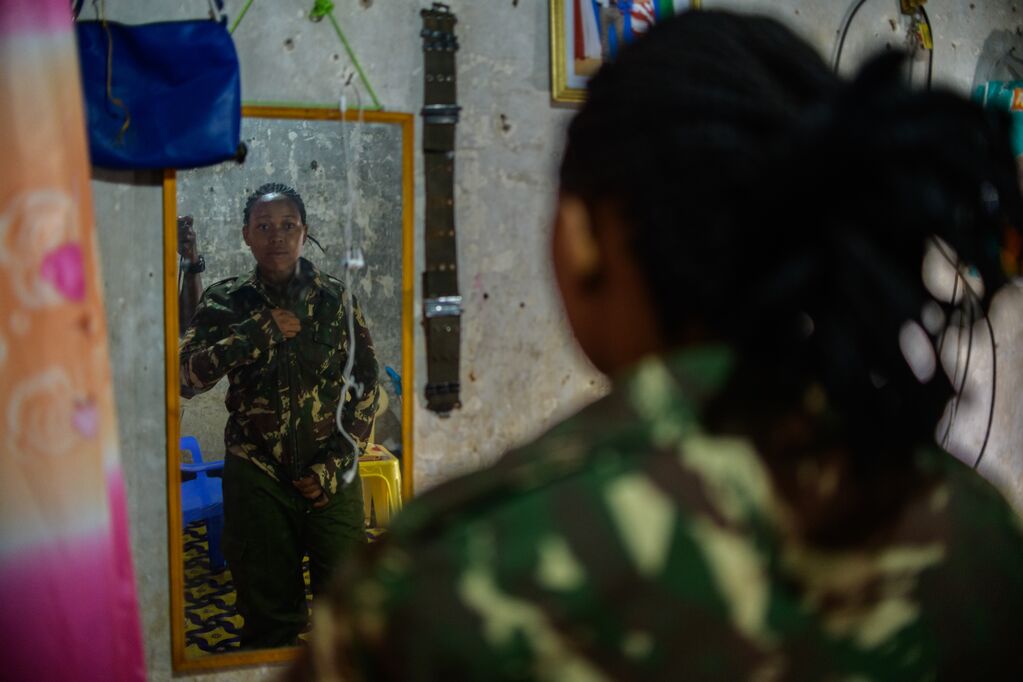 A dark history of police abuse of power

In many communities across the world, the police are notorious for taking advantage of people living in poverty. They can detain suspects in jail with little to no evidence. Miriam’s home in Kenya is no exception.

According to International Justice Mission Canada, an organization that works to protect the poor from violence, there is ample evidence of police abuse of power in Kenya. Here’s just a snapshot of the situation:

“It is easy for officers to frame poor people who may have limited formal education in order to conclude investigations quickly. Poor people can be imprisoned on the basis of a mere accusation, simply for being in the wrong place at the wrong time, or even for being unable to pay a bribe to a corrupt officer. In Kenya, 1 in 3 people have experienced this police abuse in the last year.” (International Justice Mission)

The Kenyan government has taken steps to try and fight corruption in the country, but despite their efforts, the police force remains one of the most corrupt government departments in the country according to the Ethics and Anti-Corruption Commission.

It is against this backdrop that we find Miriam’s valiant journey to the police force. 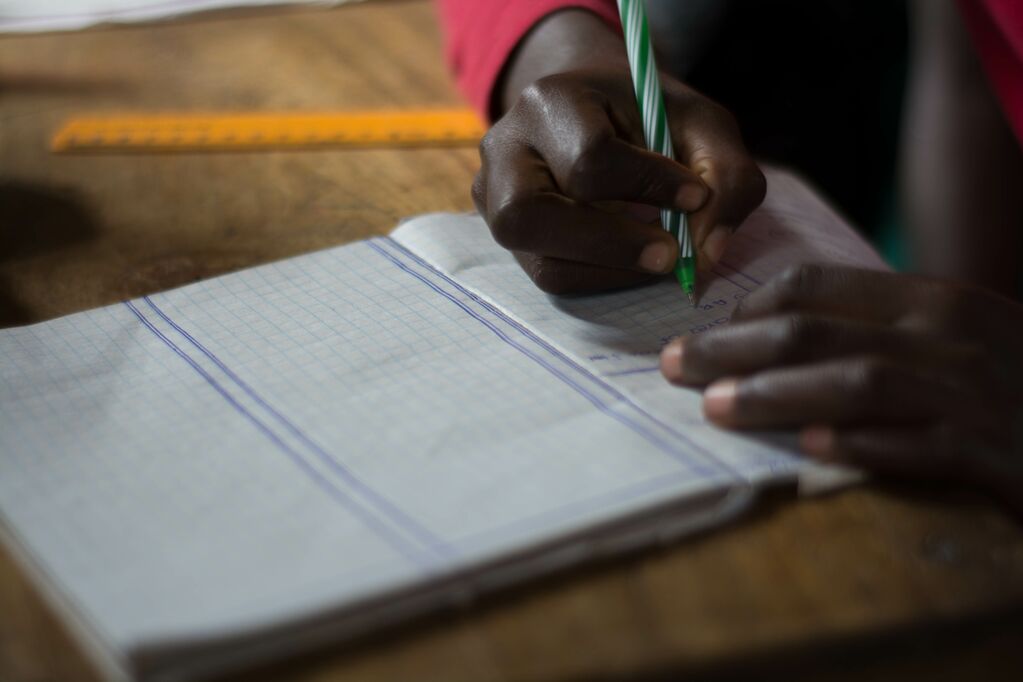 Miriam grew up with five siblings under the care of her single mother, Ruth. Every day was a struggle for Ruth to feed, clothe and educate her children. Working as a vegetable vendor earning CAD $67 a month, she found herself at a loss as to how to support her children.

But one day, a unique opportunity would change her family’s course.

“Miriam was in grade one when I received word that the Compassion centre at Victoria Baptist Church was recruiting children for the program. I registered Miriam and shortly after, I received a call that she had gotten a sponsor and received a birthday gift! In all my hard work and toiling, I had never seen such an amount of money in my life. I was so grateful to God,” says Ruth. 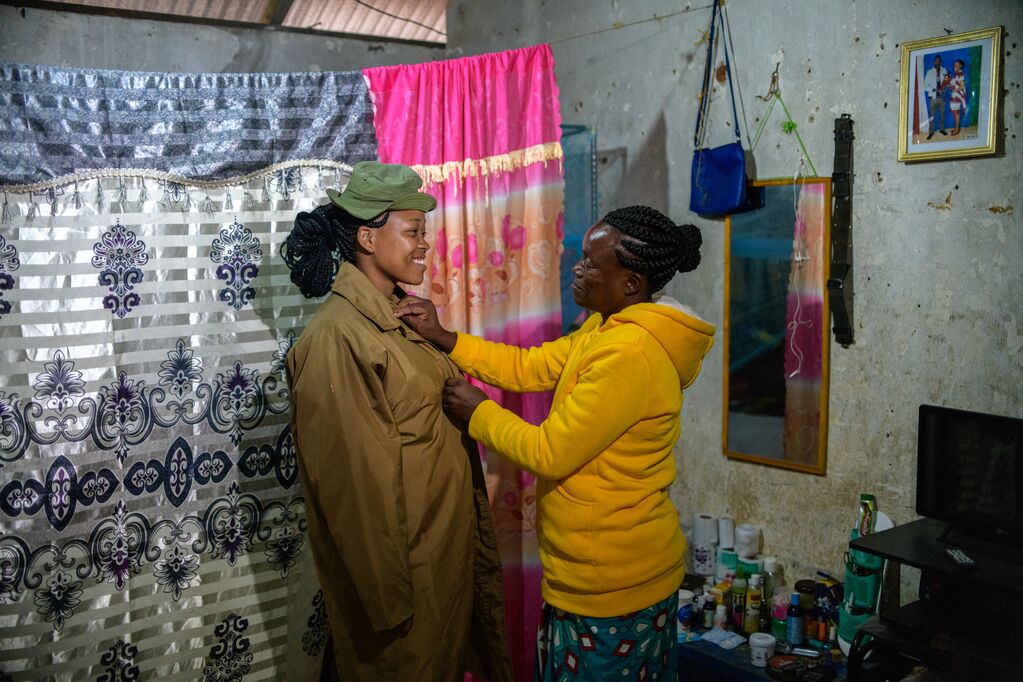 With the ongoing provision of her Compassion centre, her sponsor and her mom, Miriam’s family situation started to rapidly improve.

Through years of determination and with the financial support of her sponsor, Miriam completed her high school education and began attending a local college for hospitality.

“Holding onto the vigour it takes to stand up against injustice in a male-dominated career was something that—though naturally instilled within her—was learned through her time with Compassion.”

But her journey in studying hospitality was short-lived, as a life-altering opportunity presented itself that she couldn’t pass up: recruitment to the Kenyan Police Service.

From hospitality to the police force

But it wasn’t easy. 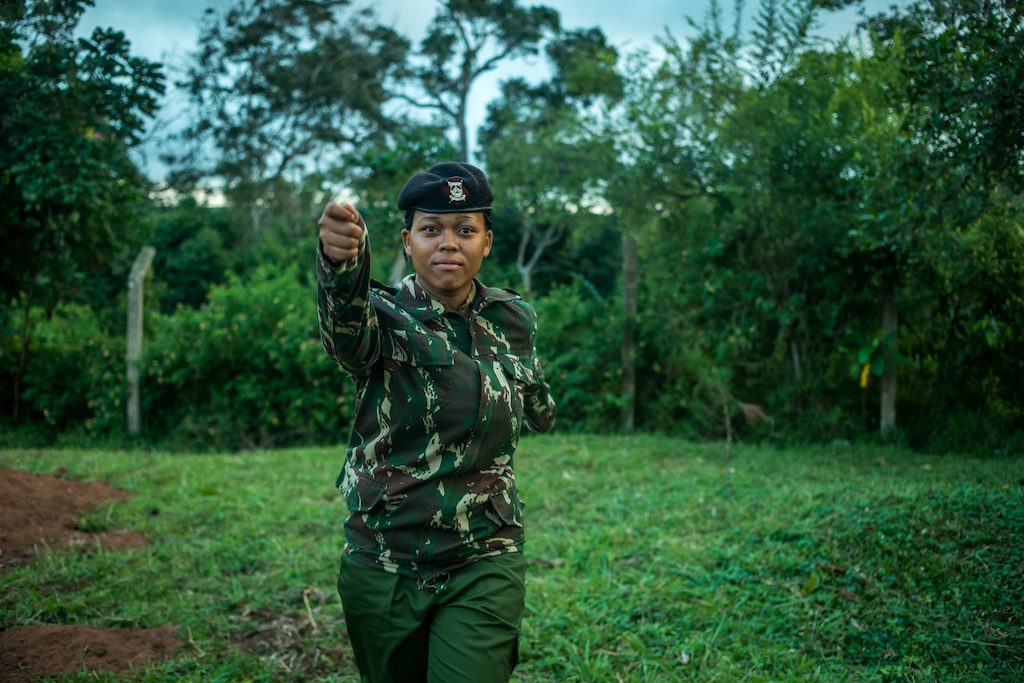 “The final part of the recruitment exercise was to run 10 kilometres. Luckily for me, in the months leading to the recruitment, I had been routinely running a few kilometres every week. I managed to finish second out of all the girls that tried out. Then, I was selected to go for a nine-month training at the police college,” says Miriam.

With a wildly long and expensive list of items required for training, Miriam began to lose hope of being able to attend.

“In a country where the police force is marred in corruption, I want to be a morally upright and just officer of the law, to protect and serve all citizens without compromise.”

But through the generosity of her Compassion centre and its director, Edah, Miriam was provided with everything she needed for the training!

The nine months that followed were the hardest months of Miriam’s young life. Every day, she was on the verge of giving up. 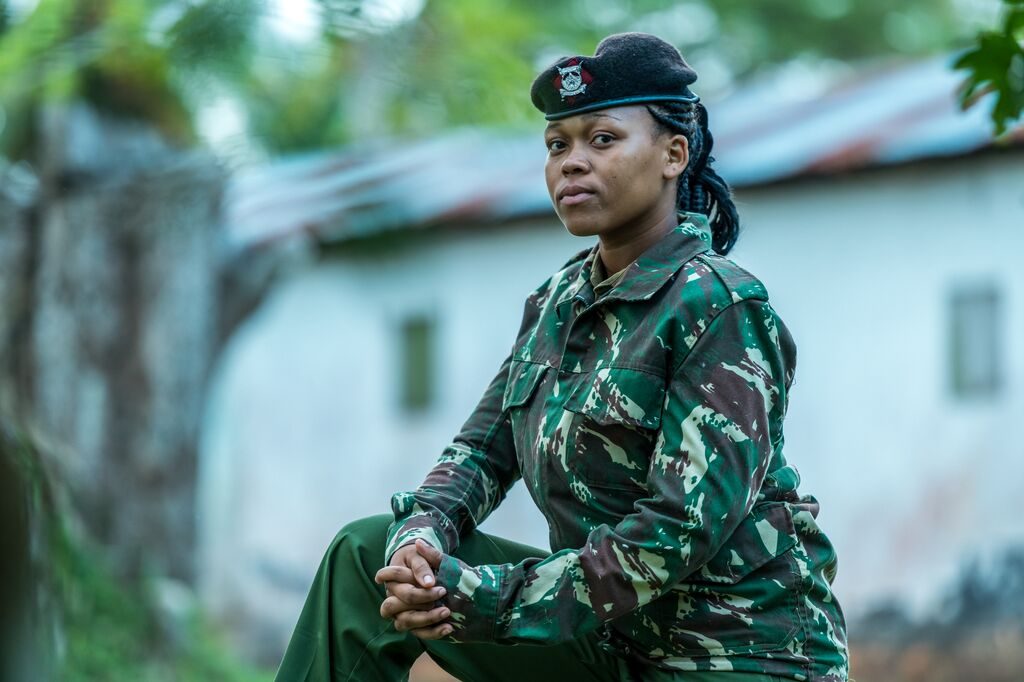 “The training camp was like a prison.  We were constantly on the move. The day began at 4 AM and ended at 10 PM. Many recruits could not complete the rigorous training,” says Miriam.

“But I always drew strength from the deep trust in God and the encouraging words I received from Edah telling me that I can do anything I put my mind to. I could not let her down by giving up.”

Before long, Miriam had successfully completed the gruelling training. She was one of 3,000 police recruits who graduated during the police parade in Nairobi that year.

An example that girls can emulate

Miriam was not only one of the few female cadets who graduated and excelled in her training, but she was also given an award from the president of the Republic of Kenya himself for being the fastest cadet to complete the quick march routine—one of the marching drills required in training. 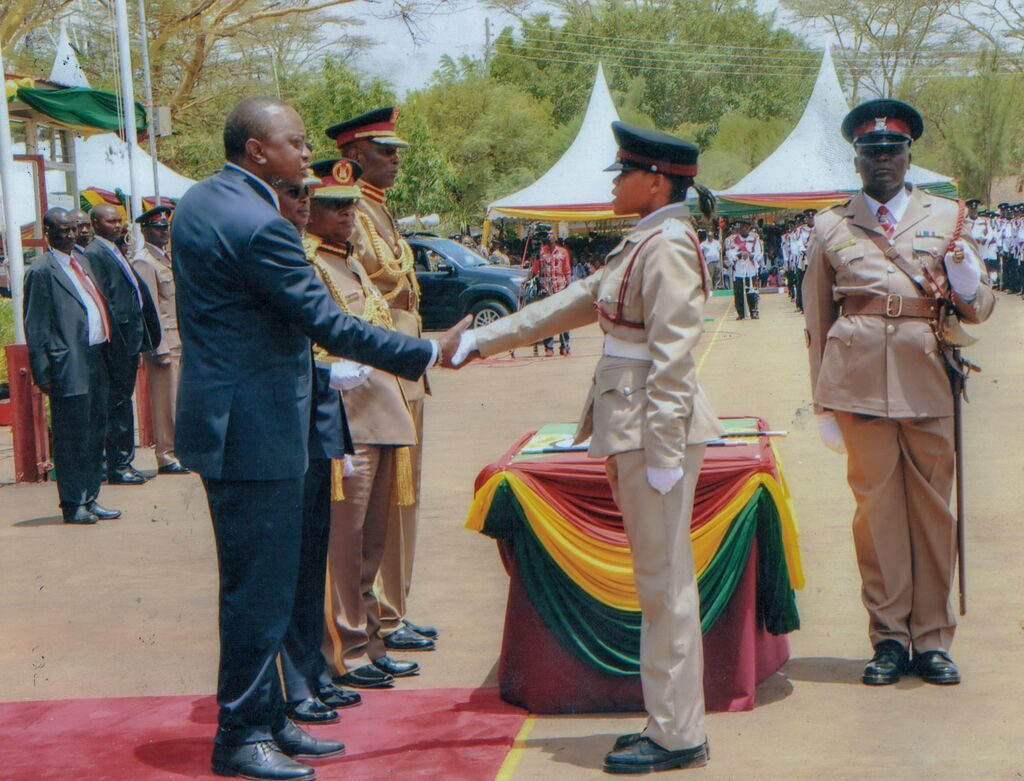 Today, Miriam is eager to serve her country in the administration of the police service at the highest possible level she can.

“I want to be an example that girls can emulate. I want them to believe that they can be whatever they put their mind to. With this opportunity I have, I want to rise in rank and become a decisionmaker in the police force,” says Miriam.

Holding onto the vigour it takes to stand up against injustice in a male-dominated career was something that—though naturally instilled within her—was learned through her time with Compassion.

“Being a Compassion beneficiary prepared me for the armed forces,” says Miriam.

“The discipline and the deep trust in God—things that were instilled in me from a very young age—have become essential in the discharging of my duties. In a country where the police force is marred in corruption, I want to be a morally upright and just officer of the law, to protect and serve all citizens without compromise.” 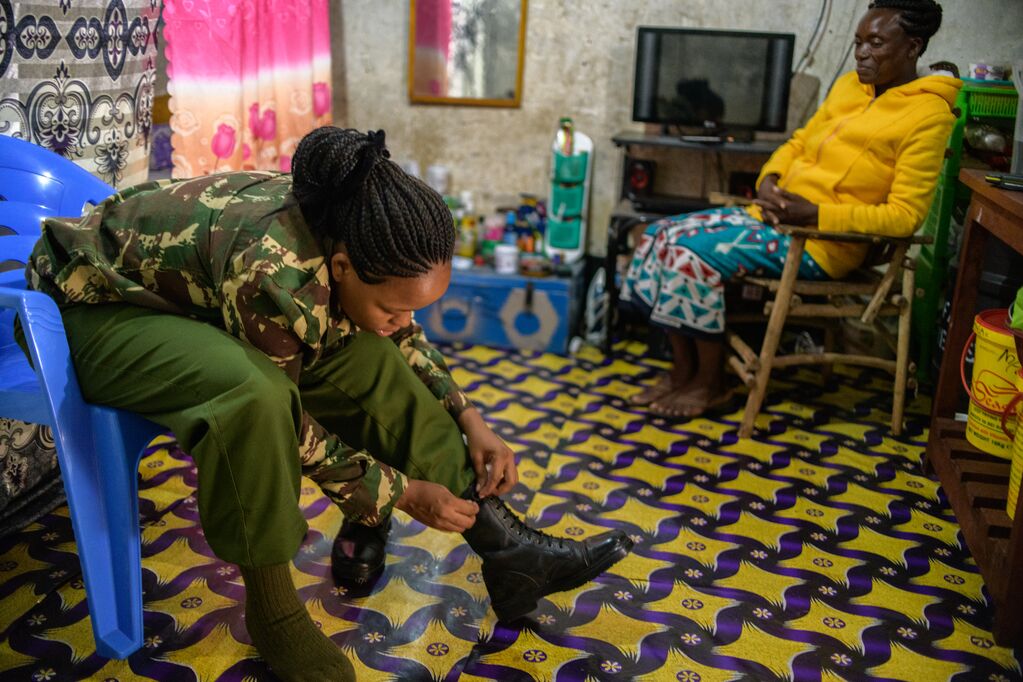 Miriam faces a future that—though will undoubtedly bring friction and adversity—is bright. Every day, she will tie up her boots and work for a better tomorrow in Kenya.

Justice, righteousness and true freedom are alive in all corners of the world. In bringing forth Christ’s kingdom to earth, people like Miriam, who pursue true peace in their corner, are our inspiration.

Want to empower a young woman to reach her potential?