The last recorded case of polio in the Philippines was in 1993. Unfortunately, Denard was born in 1990. When he was a three, he contracted the virus and was paralyzed in both of his legs from the knee down. He was one of the very last polio cases in the country.

Unable to stand, he has spent his life crawling on all fours.

“I’ve been walking on my knees for so long that they are now thick with callouses,” Denard says. “It still hurts so much on some days, shooting pains to my knees.” Although Compassion gave Denard a wheelchair, he preferred not to use it, especially on the bumpy and unpaved terrain of his hometown. 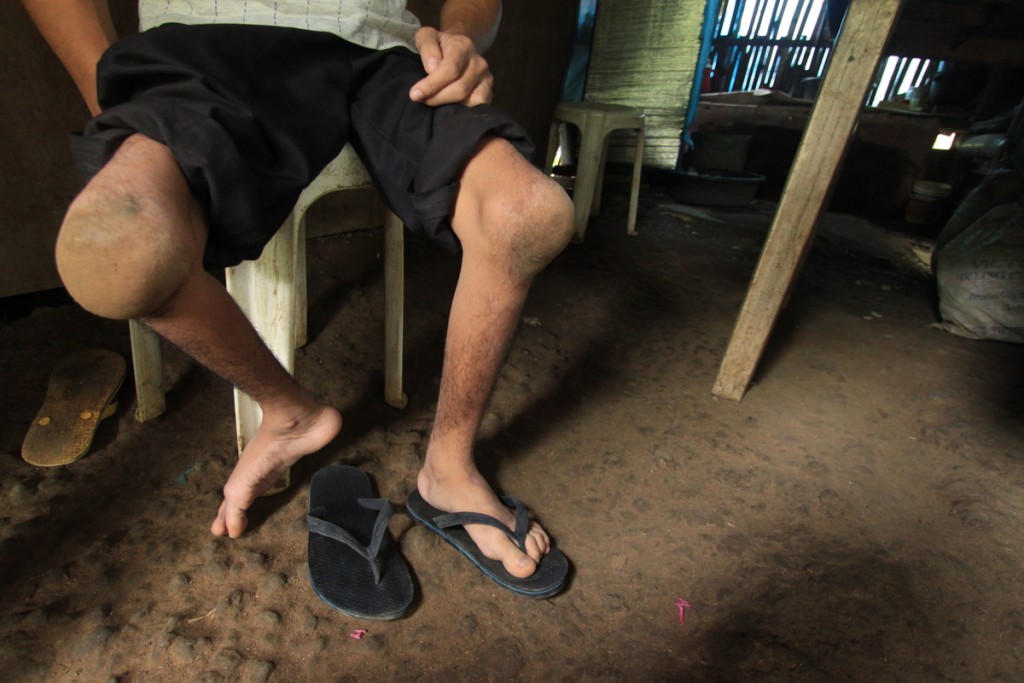 Denard’s knees are calloused from years of crawling after he was paralyzed by polio.

Denard and his two siblings were abandoned by their parents, so they grew up with their aunt, Estrella. She has three children of her own, and she would take all six children from house to house to wash clothes for a living. Estrella attended a local church that had a Compassion program, so when Denard was four, he was registered.

Herlyn Hernaiz was the director of the centre, and she admits that at first, they weren’t sure how to handle Denard.

“We weren’t ready for Denard then, and didn’t know how to handle children with special needs,” she says. “But we did not hesitate to take the opportunity to take care of Denard. Since then, we have opened our centre to disabled children.”

The Compassion centre adjusted to accommodate Denard, but he wasn’t comfortable around the other children. He would watch the other children play and stay in a corner by himself. But when he was six, Denard began attending Sunday school more regularly. He realized that in a classroom he didn’t have to stand or run; he could sit while reciting and memorizing Bible verses. Soon, he gained friends at church and the Compassion centre. He stopped distancing himself from people as other Compassion children and centre staff treated him as they would any other child. At the centre, Denard would forget that he had a disability. Other times, he felt very special as his friends would carry him to cross a river or hike up a hill. 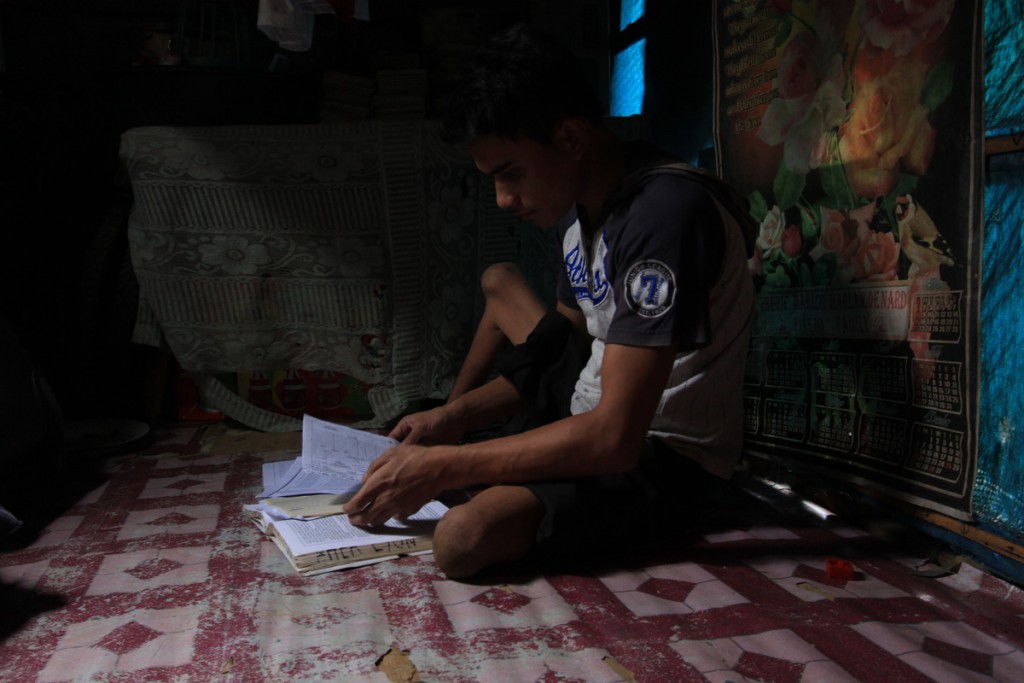 Outside the church walls, however, was a different story.

“People laughed and made fun of me,” Denard says. “The most hurtful thing I was told was when I entered the classroom and one of my classmates said, ‘Who let the dog in?’ and everybody laughed, including my teacher.”

Denard attempted to quit elementary school several times. He was ridiculed. His classmates would punch and kick him, and he couldn’t fight back. But he kept going for his aunt, who continually encouraged him.

He continued in school, but it was hard not to be discouraged. “He would get encouraged at church and from his aunt, but would again be disheartened elsewhere,” says Herlyn. “In high school, he finally gave up.”

Denard finished high school, but with poor grades and an equally poor outlook on life. He stopped attending the student centre and church. 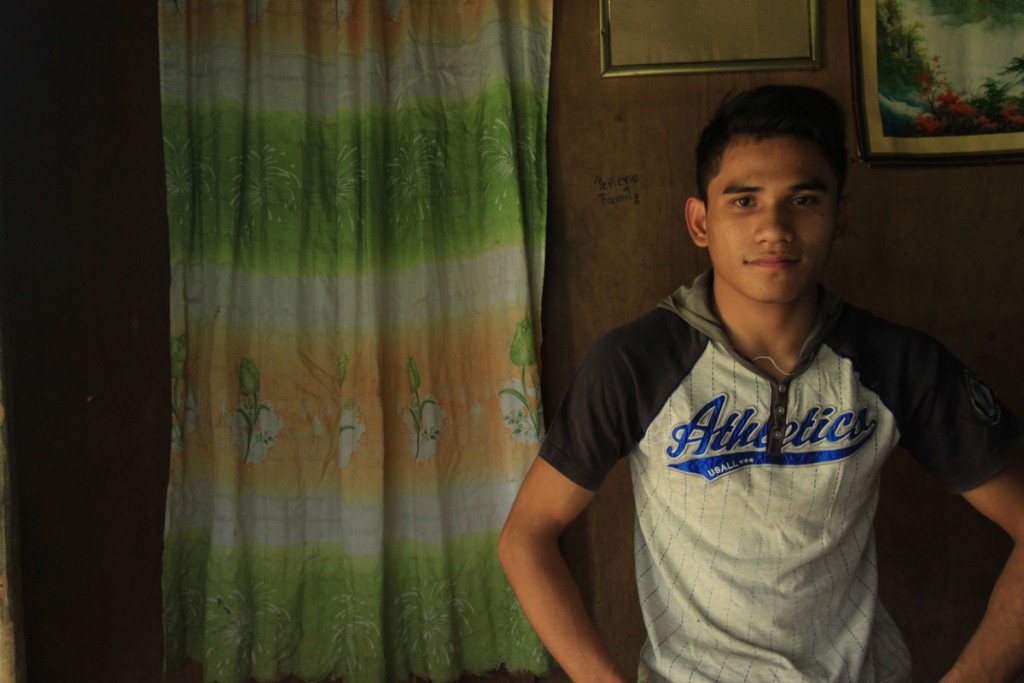 This went on for a year and half. But the centre staff would not give up on him. One day in May 2010, Denard was invited to join a group of sponsored youth to have dinner with a group of Australian sponsors. He was 20 years old and about to graduate from the program. Denard sat with three sponsors, and they began to ask about his story.

“I told them the story of my life,” he says, “and as soon as I finished they said, ‘We want you to finish your studies.’ They committed to pay for my tuition and school costs, and that changed my life completely.”

Denard was touched, not by the thought of going to college for free, but because he felt there were people who really cared for him. He enrolled at Saint Joseph College, the only college in town, for a two-year course in computer technology.

“People were surprised when I entered the classroom for the very first time,” Denard says. “But this time I was determined to finish my studies for the people who cared for me and for myself.” 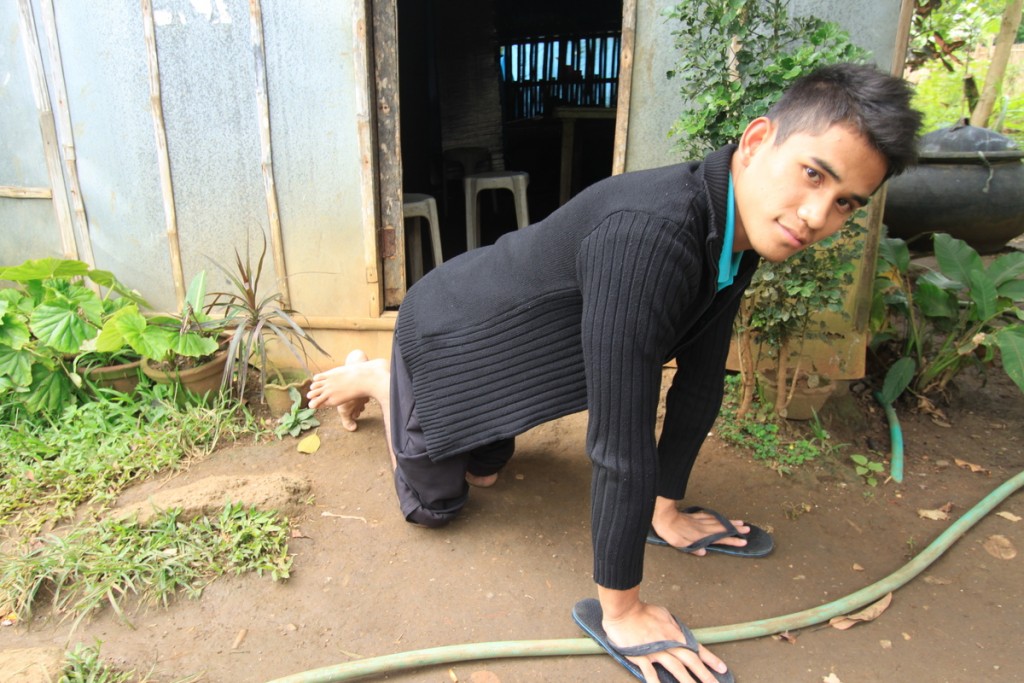 Two years later, he graduated with an Associate degree in computer technology. And now Denard is supporting himself and his entire family with a job as an encoder for the government.

Denard is also actively giving back to others. At church, he serves as a singer in the worship band and as a youth leader. He is also a light to others with disabilities, serving as the president of an association for Persons with Disabilities.