As the COVID-19 crisis captured our attention this year, other crises like political unrest and environmental disaster were sometimes overlooked. But these crises didn’t pause because of the pandemic. They had profound, layered effects on the lives of the children and families we serve, as well as on our frontline staff.

Watch: Compassion International’s President and CEO, Santiago “Jimmy” Mellado, shares about the multiple crises affecting the countries where we work.

In November, several tropical storms devastated communities where we work in the Philippines and Latin America. The Philippines weathered five tropical storms in a three-week period, including Typhoons Goni and Vamco. Meanwhile, several countries in Latin America, including Nicaragua, Guatemala, Honduras, Mexico and Colombia, were hit back-to-back by two major hurricanes, Hurricanes Eta and Iota. 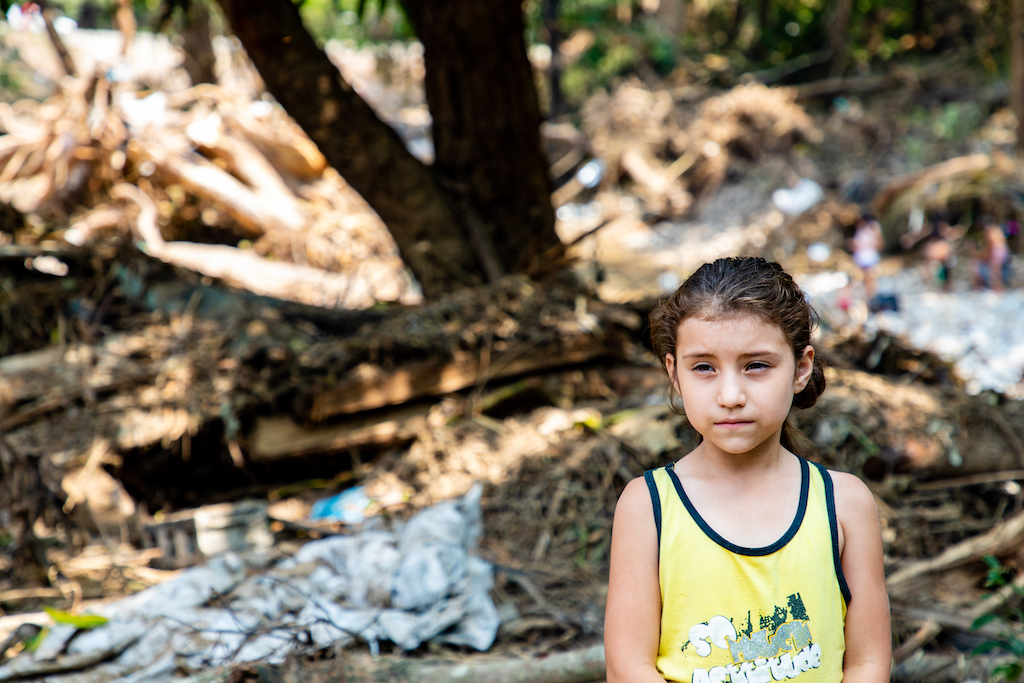 In Honduras, seven-year-old Kirian’s home was reduced to rubble.

With families already facing increased hardship due to the COVID-19 crisis, these storms were a devastating blow near the end of an already devastating year. And yet in the midst of the devastation, these communities held each other up and took care of each other. With the support and prayers of the global Compassion family behind them, these Compassion staff, children and families are rising up to rebuild what they have lost.

In the Philippines, Typhoon Goni made landfall on November 1, destroying homes, church buildings and lives.

One of Compassion’s church partners in Iriga City served as an evacuation centre for 10 families. But when the entire roof of the church was blown away by the record-setting winds, the families were forced to crowd into the pastor’s home. 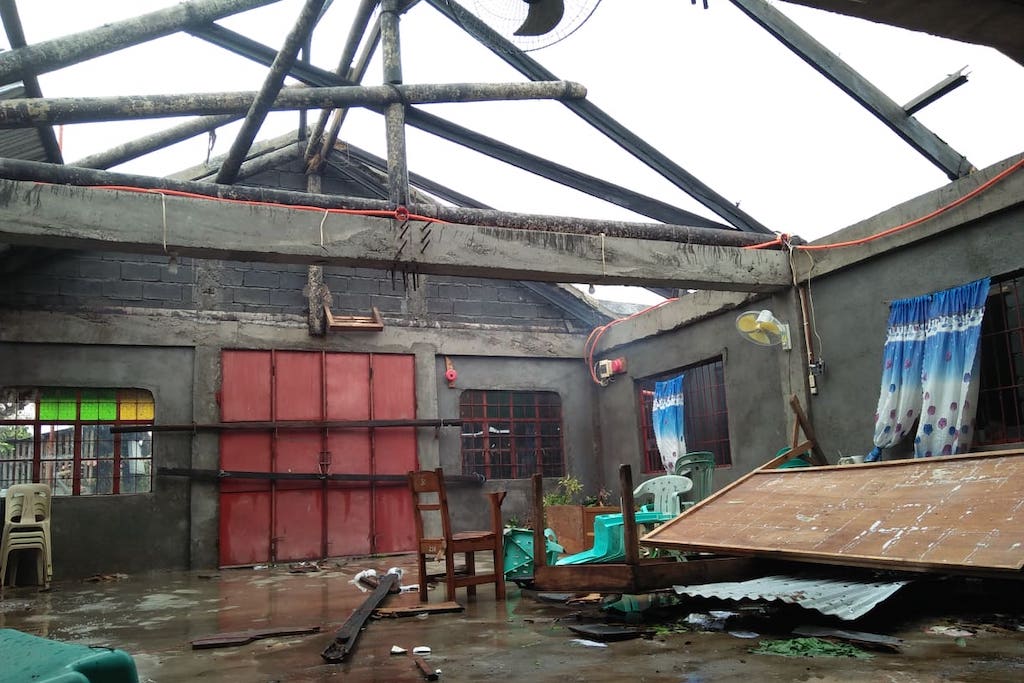 Typhoon Goni swept the roof off of this Compassion church partner’s building in Iriga City.

Two other nearby church partners were completely flooded, while several Compassion children’s homes were damaged or destroyed.

Approximately 60 kilometres southeast of Iriga City is the Philippines’ famous Mayon volcano, where several homes stood vulnerable to lahar, which is a concrete-like flow of volcanic mud and debris that can have violent and devastating effects. 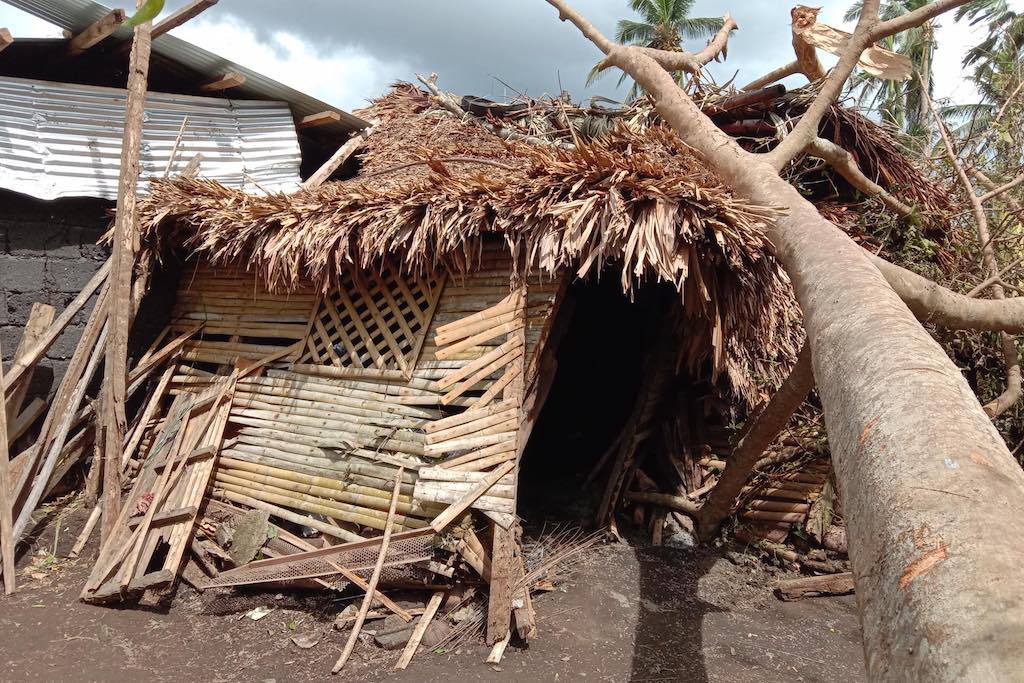 At a nearby evacuation centre, Compassion-sponsored youth Cyril received tragic news: one of her close friends was killed by the strong currents of the floodwaters. “We never know what will happen tomorrow,” the grieving teen reflects. In total, 17 people were killed by Typhoon Goni.

Even as Compassion centres mounted their response, they soon needed to begin bracing for another devastating storm.

Less than two weeks after Typhoon Goni, Typhoon Vamco made landfall on November 11. The storm submerged several cities and provinces, including areas already pummelled by Goni. 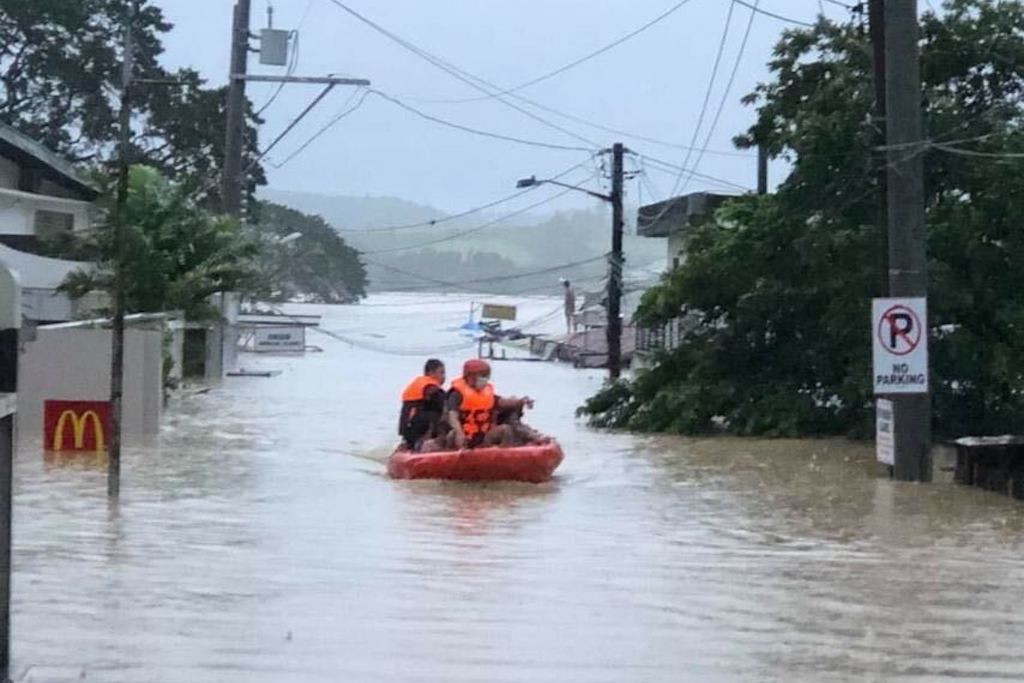 A rescue team navigates a raft through the flooded streets of the Philippines in the aftermath of Typhoon Vamco.

It wasn’t just sponsored children who were affected. Compassion Philippines staff also experienced flooding and severe damage to their homes. In response, other staff members quickly pooled their own money to purchase resources and relief goods for their co-workers.

Noel Pabiona, National Director of Compassion Philippines, led the charge, mobilizing crisis management teams to check on and support each church partner. He even jumped in his car, attempting to navigate the flooded streets and reach four trapped Compassion team members. While he was able to reach one of them to deliver hot meals, reaching the other three had to wait until the next day.

On November 13, several Compassion staff put on their face masks and went to buy and pack groceries with their own money to deliver to their co-workers whose homes had flooded. Then, they helped begin the clean-up. 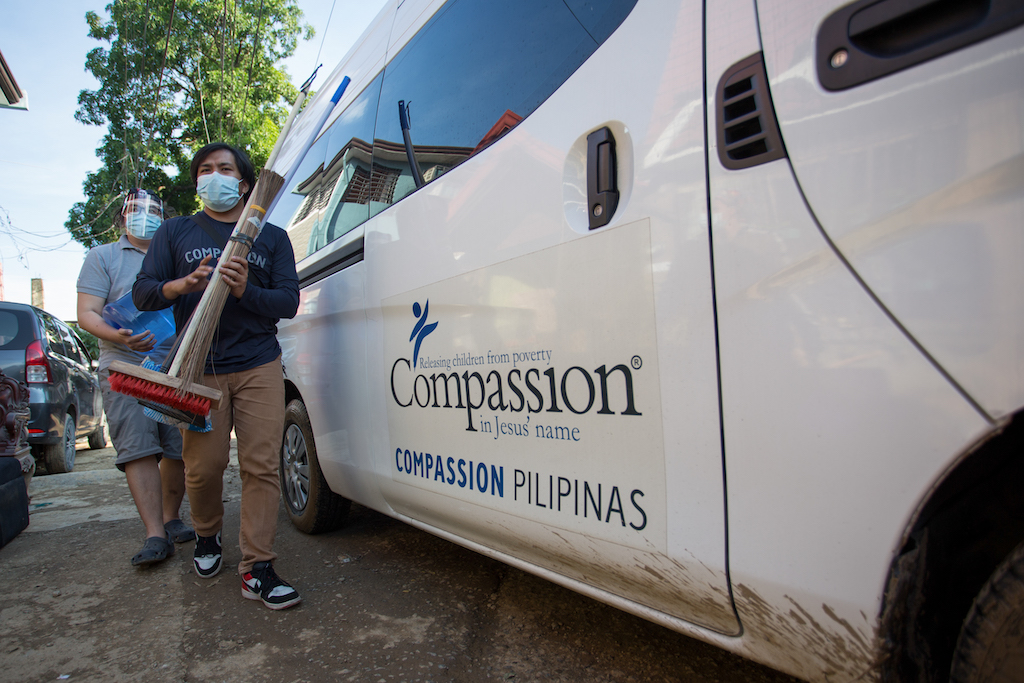 Their actions reflected those of Compassion frontline church partner staff across the region, who that day were doing similar tasks—evaluating the needs of their neighbours and responding with support from Compassion.

For Compassion beneficiaries and staff alike, the help was deeply appreciated. “I don’t know how I could thank them enough,” says Abigail, a program support staff whose home was flooded. “I am so touched, and so are my parents.”

Honduras: Displaced but not alone

Hurricane Eta made landfall in Honduras on November 3, impacting almost two million people in the country. Thousands of Compassion children and their families were impacted by flooding and landslides and had to evacuate to shelters. 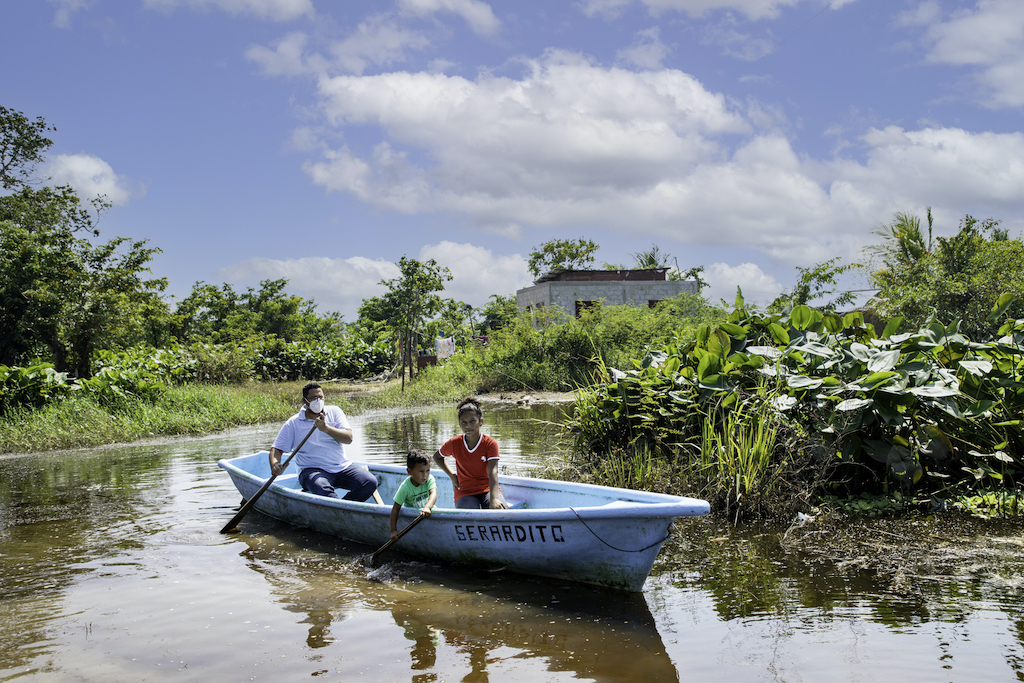 Twelve-year-old Daniela’s family had to use her stepfather’s fishing boat to navigate the flooded streets of their neighbourhood in the aftermath of Hurricane Eta, in order to assess the damage.

One of those families was Javier and his mother Iris. “In the blink of an eye, the water level got to my chest,” Iris recounts. “I grabbed Javier and a neighbour put him on his shoulders. Though we were feeling fatigue, we did not give up until we found a safe shore.”

Javier and Iris evacuated to a local government shelter, as they grappled with the reality of losing everything. Yet despite the chaos and devastation, they are grateful to be alive. 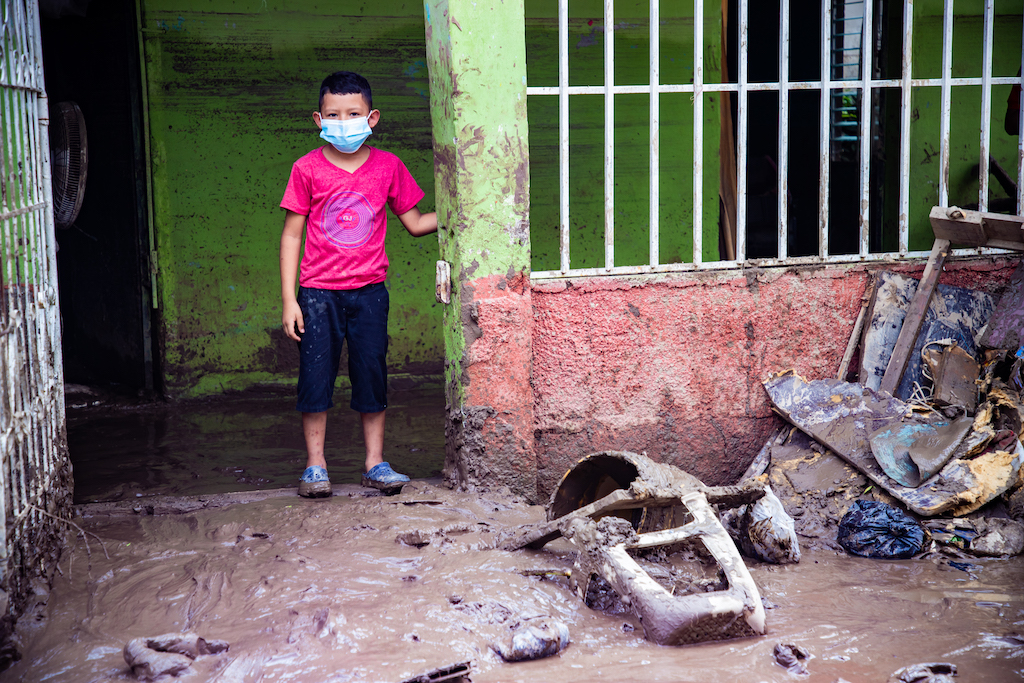 Javier stands in the doorway of his home. The muddy devastation is sobering—but he and his mother are not alone.

And they are not alone. Compassion centre staff regularly visit Compassion children staying in shelters and provide groceries, water, hygiene kits, mattresses, blankets, clothes and medical care. “We are checking on them daily and providing not only relief support but phycological and spiritual support as well,” says Anthony, a Compassion Honduras staff member.

As the rebuilding begins, Compassion children know they are not alone. They have the support of their Compassion centre at the local church and the prayers of sponsors around the globe.

Nicaragua: The church becomes a refuge

“We left our house on Sunday when we heard the hurricane warning,” says eight-year-old José. “The day after, we heard our house had been destroyed.”

It’s devastation that no child should have to endure. Thankfully, José and his family had a place to go.

“When the rain started, we opened the doors and prepared food, drinks and blankets. In the middle of the night, staff and children were running from their homes to come here, many of whom are part of Compassion and many are from the community,” says Adela, the pastor of Compassion’s local church partner in the village of Virgen Morena, Nicaragua. 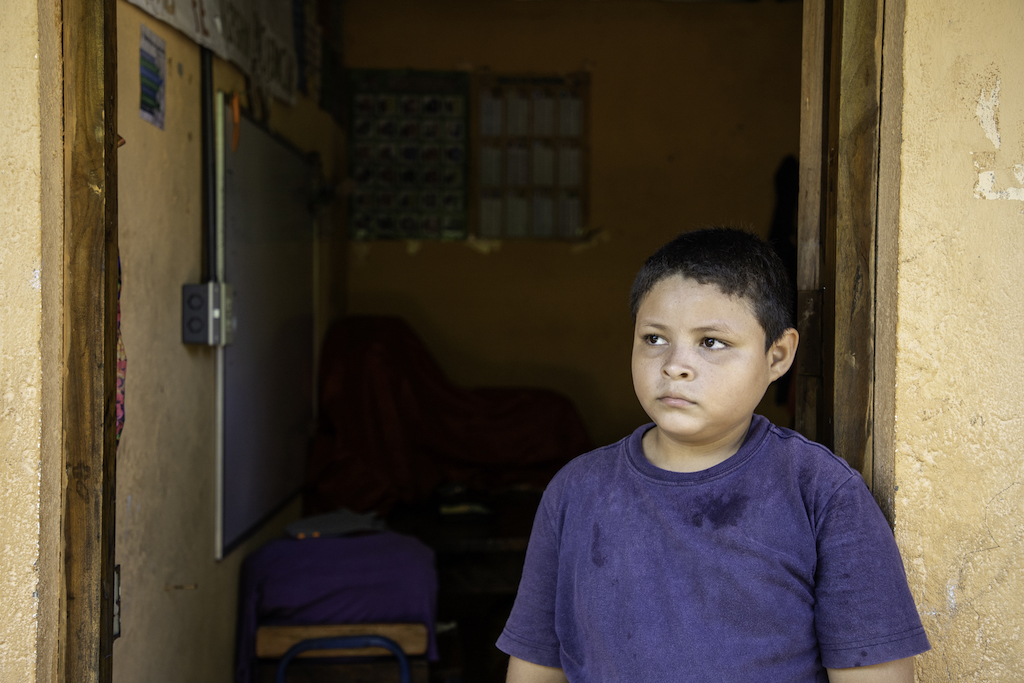 José stands outside one of the classrooms at his Compassion centre, which has temporarily been converted into a bedroom to shelter families displaced by the storm.

Because of the centre’s constant, reliable assistance and protection provided to the community, it has become an official government-appointed shelter.

Of course, COVID-19 safety protocols are a top priority. They have put in place strict measures to ensure the health and safety of the families who are taking refuge at the centre. “We provided face masks, hand soap and hand sanitizer that we had received from the Compassion program,” says Pastor Adela. 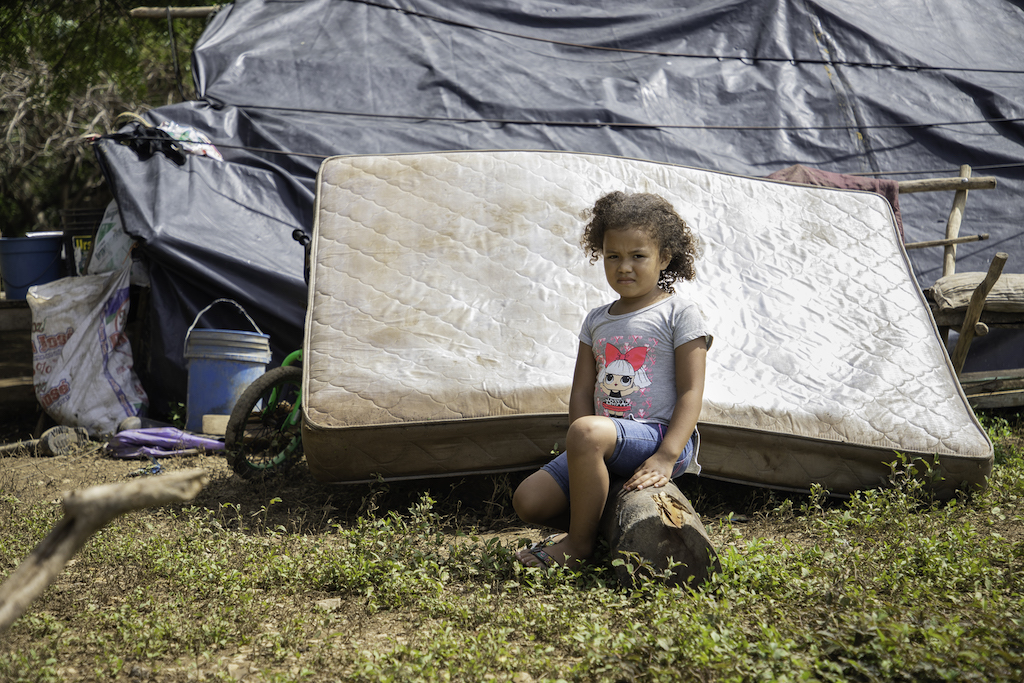 Four-year-old Michel sits outside with her mattress that is drying in the sun.

The disaster has delayed the centre’s reopening plans after an eight-month closure due to COVID-19. But that isn’t dampening the centre staff’s resolve. “This is when our children need us most,” says the centre’s director, Ana. “Families and children need to know that they’re not alone.”

In Guatemala, a total of 80,000 people we affected by the two hurricanes, including approximately 800 families that are part of Compassion’s program. Like in every country affected by these disasters, our local church partners immediately mobilized to provide food, warm clothes and shelter. In the weeks and months ahead, staff will assess needs and begin making plans for long-term recovery. 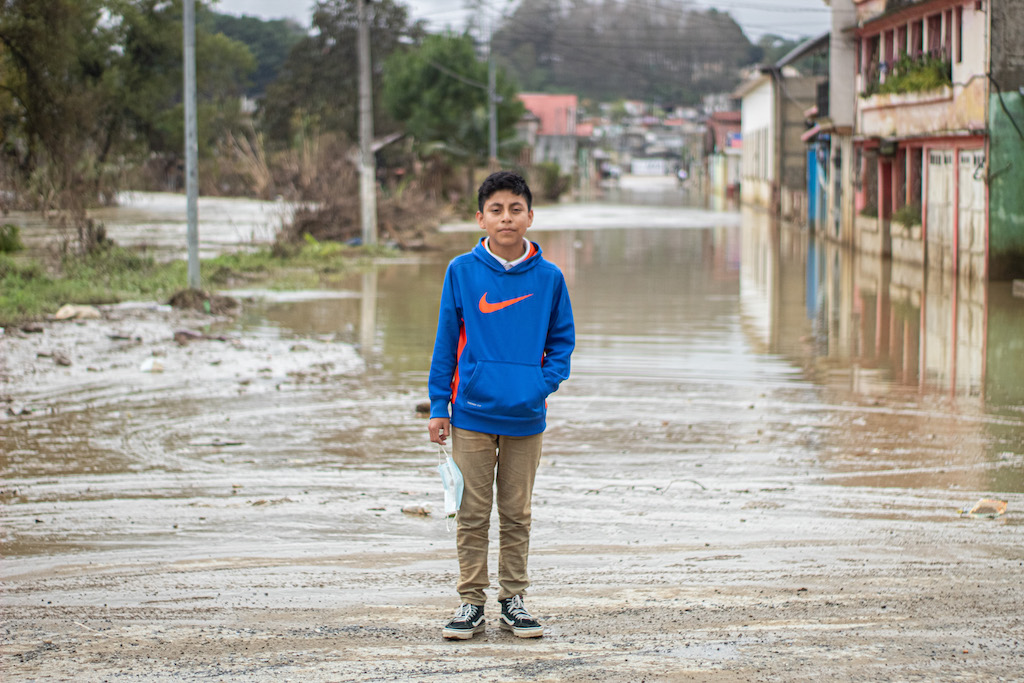 Anthony stands in the muddy streets of his community.

Fourteen-year-old Anthony shares about his experience during the storms: “I was in my uncle’s house when my mother called, asking us to stay inside the home because the water level was increasing really fast. I was scared. Sadly, hours later, my parents told us that they couldn’t save anything from our house and that it had been completely flooded.”

“Thank God we still have our parents with us,” Anthony says. “We are living at our uncle’s home while the water goes down.”

Nine-year-old Elfego also recounts his experience: “When we arrived [home after my mother’s work], we were surrounded by the dark water. Our things were floating! It smelled really bad and the floor was dark. I was scared and sad because I lost my Skippy Magazine I received from the centre.” 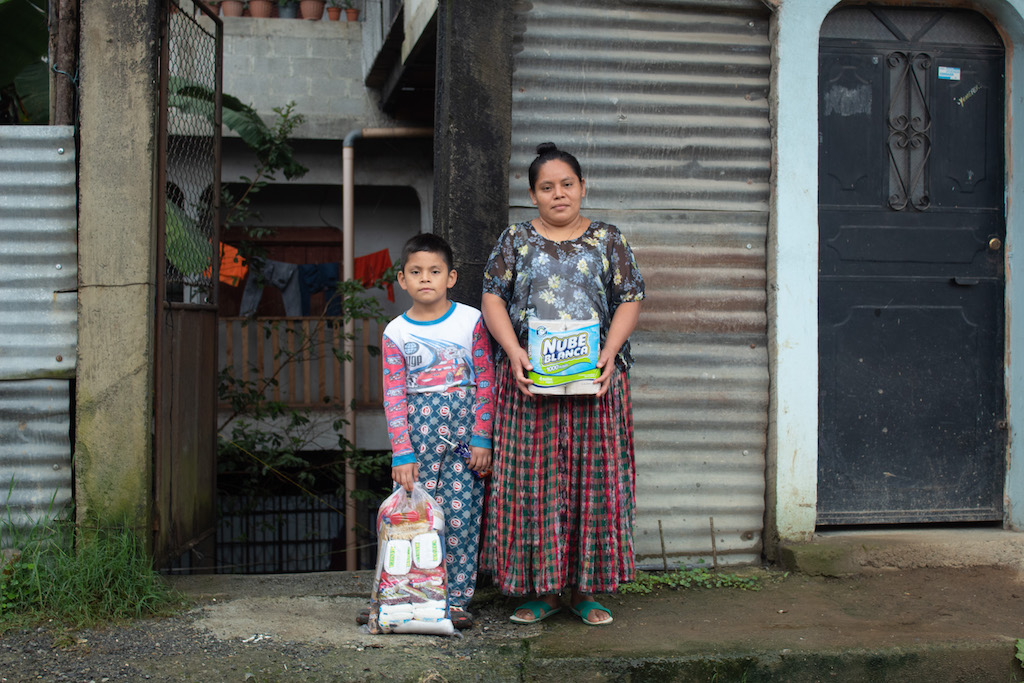 Amelia and Elfego stand outside their rented room with supplies provided by Compassion.

In the aftermath, the Compassion centre is providing rent support to Elfego and his mother, Amelia, so they have a safe place to stay while their home is restored.

“I can’t imagine what would’ve happened [without the support of Compassion],” says Amelia. “The centre is supporting me to pay the rent of this room. Without the centre, life would be worse.”

The effects of these storms have been devastating, but thanks to the support and prayers of Compassion supporters around the world, children and families living in poverty know they are not alone. They have the support of our local church partners right now and as they look to rebuild.

The faithful sponsorship and donations of Canadians like you make this possible. Thank you.

“We’re truly grateful for the help,” says Adilia, a mother from Nicaragua. “During this difficult time, we have felt their love. We are happy to know that we’re not alone.”

If your sponsored child and their family were directly affected by one of these environmental disasters, we will contact you with more information about the impact and how you can help.

Give a new, safe home to a family who lost theirs to environmental disaster through Gifts of Compassion.

WATCH: How can Christians respond to a crisis?