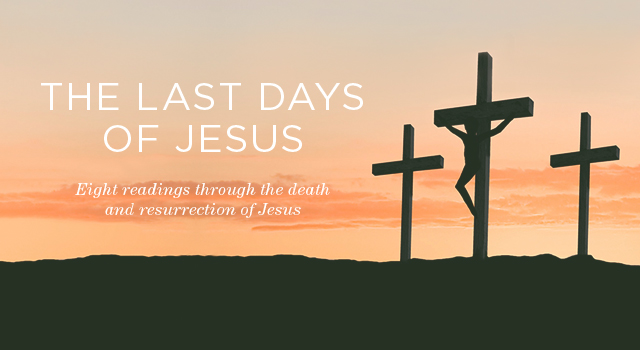 Then Jesus went with them to a place called Gethsemane, and he said to his disciples, “Sit here, while I go over there and pray.” And taking with him Peter and the two sons of Zebedee, he began to be sorrowful and troubled. Then he said to them, “My soul is very sorrowful, even to death; remain here, and watch with me.” And going a little farther he fell on his face and prayed, saying, “My Father, if it be possible, let this cup pass from me; nevertheless, not as I will, but as you will.” And he came to the disciples and found them sleeping. And he said to Peter, “So, could you not watch with me one hour? Watch and pray that you may not enter into temptation. The spirit indeed is willing, but the flesh is weak.” Again, for the second time, he went away and prayed, “My Father, if this cannot pass unless I drink it, your will be done.” And again he came and found them sleeping, for their eyes were heavy. So, leaving them again, he went away and prayed for the third time, saying the same words again. Then he came to the disciples and said to them, “Sleep and take your rest later on. See, the hour is at hand, and the Son of Man is betrayed into the hands of sinners. Rise, let us be going; see, my betrayer is at hand.” (Matthew 26:36-46 ESV)

When we think of Jesus, we often think of Him as sure, strong and confident—the paragon of unwavering faith in the Father. It’s hard for us to wrap our minds around the idea of Jesus being terrified. And yet, this is what we see on the night before the crucifixion.

In the Garden of Gethsemane, mere hours before He would be betrayed by Judas and led away to His death, Jesus experienced fear in a way He never had before. The full, unrestrained fury of God’s wrath against sin was about to be poured out on Him. He would endure all the punishment due for the sins of His people. So overwhelmed was He that Jesus began to sweat what appeared to be drops of blood! To say Jesus was terrified is a massive understatement. And so He asked the most important question anyone could ask: Is there another way?

How many of us have wondered this? After all, throughout the gospels, Jesus performed amazing signs and wonders—He even forgave sins with just a word. Did Jesus have to endure such torture? Wasn’t this kind of excessive? While this is difficult for us to understand, we need to take comfort in Jesus’ prayer:

“My Father, if it be possible, let this cup pass from me; nevertheless, not as I will, but as you will.”

Jesus asked the Father if there was another way. How did the Father answer? He said no. The only way to rescue His people from sin was for Jesus to die. And Jesus responded by submitting to the Father’s will. By doing so, Jesus’ resolve was strengthened. His terror subsided. He stood, ready to face His betrayer, the submissive Saviour, ready to die for the sins of the world.

Father, thank you for this picture of Jesus’ humanity—that He truly was a man, even as He was truly God. Help us to make His prayer ours, that we would be encouraged and strengthened as we submit our wills to Yours’, knowing that Your plans are far greater than anything we can imagine. Amen.