A group of positive and inspired teenagers is an unconventional sight in Carazo, Nicaragua. In this community, youth are commonly exposed to dangerous influences and vices from a young age. But this joyful sight is a regular occurrence at Christ is the Answer child development centre, where local teens are learning how to make hammocks.

The colourful threads, long metal needles and half-finished hammocks hanging from the walls are a vision that Byron—the centre’s director—had when he first asked himself how he’d inspire and motivate their youth.

He wanted to do something different—something that would catch the teenagers’ attention.

The centre staff decided to hold a hammock-making workshop.

Hammocks are common in southern Nicaragua. They’re seen in front of homes, used for rest during hot afternoons, and can be spotted out in the fields as seating areas for meal breaks or places to lie down after a day of hard work.

Beautiful and useful, they were the perfect focus for this workshop which aimed to motivate the centre’s youth.

Interest in the workshop was immediately high—higher than expected.

“Many youth signed up!” Byron says. “They said they felt very happy about it, not only because they would learn a new skill, but because they felt cared for and included.”

The response was overwhelming, and it came as a pleasant surprise for the centre staff when they had to open two groups for the course instead of just one.

“I thought it was interesting, and I told myself that I wanted to learn something new that I could use in the future,” says 16-year-old Ariel. “Besides, I talked to my friends and they all liked it too, so we signed up together!” 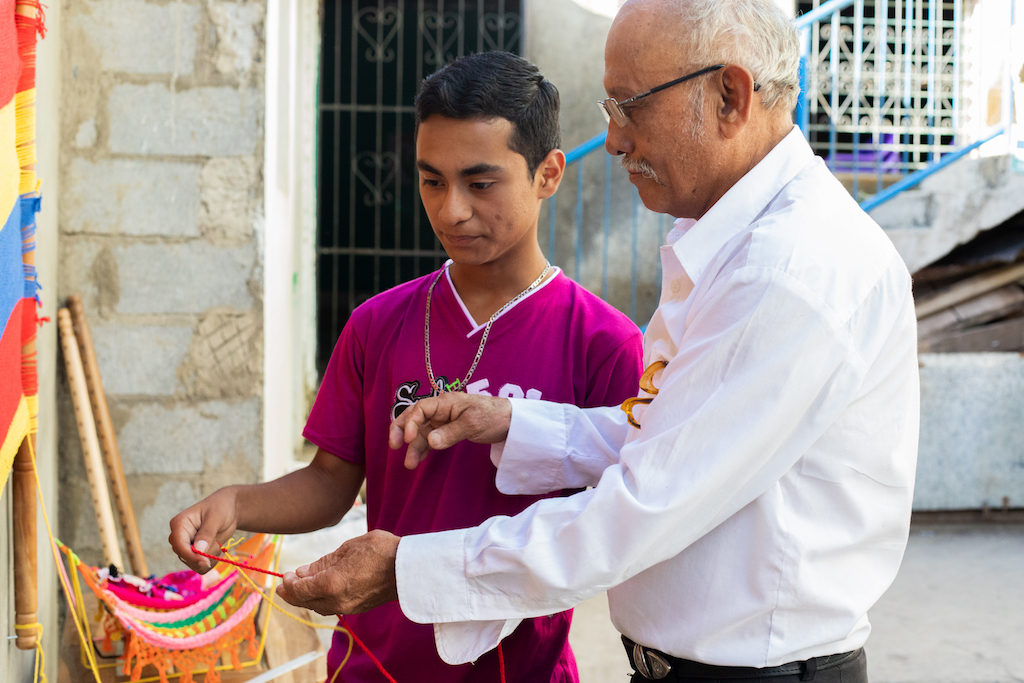 Ariel works on a hammock with the workshop’s instructor, Roberto.

Along with the group of teenagers, Gema—the centre’s tutor for the 12 to 18 age group—saw this workshop as an opportunity to interact with her students, provide them with constant support and set a positive example. “I asked Byron for permission to join them because I wanted to go through this with them and show them that it’s never too late to learn a new skill,” says Gema.

For Byron, the workshop isn’t just about learning the skill itself, but about shifting mindsets.

“We have students who are 15 or 16 years old and still in sixth or seventh grade. Their mindset was very negative. They could not see themselves changing their situation. With this workshop, we wanted them to feel useful—to feel like they could develop and improve themselves,” Byron says.

“I really like this workshop,” says 14-year-old Pedro. “I like that I can practice this at home, and that if I want, I could use this knowledge to start my own business. I still find knots complicated, but I’m practicing!” 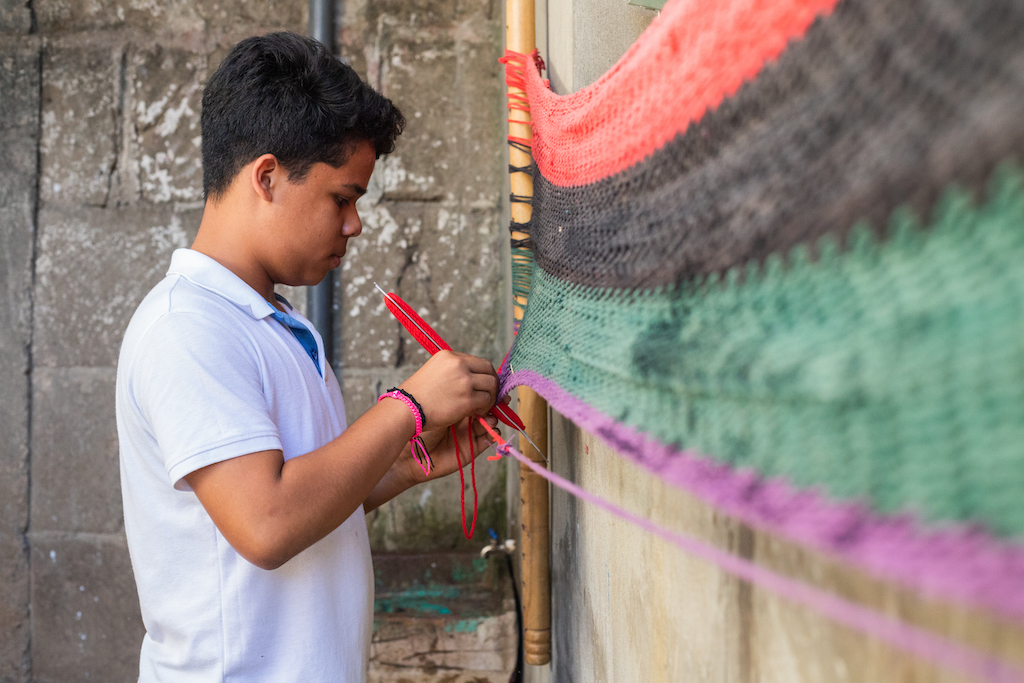 Pedro practices one of those complicated knots.

“We want them to be agents of change, not only in their families, but in their communities as well. We want them to see that they’re not here to waste their youth. The Lord has a purpose for them.”

At times, despite the teenagers’ excitement, the centre faces the challenge of keeping them motivated. Because of their vulnerable situation and stage in life, Gema has the responsibility of guiding and following up with them.

“They’re at a difficult stage in their lives, but I am in a privileged position to help them. I make sure to be there for them and tell them that it is important to finish what we started,” Gema says.

Positive outcomes from the workshop can already be seen.

“We have seen how their way of thinking has changed. They come to me and tell me that they’re now making their own hammocks at home. Some are even selling them! They also show a greater desire to go to school, to go to college and to start their own businesses,” Byron says.

“They are aspiring for more now.” 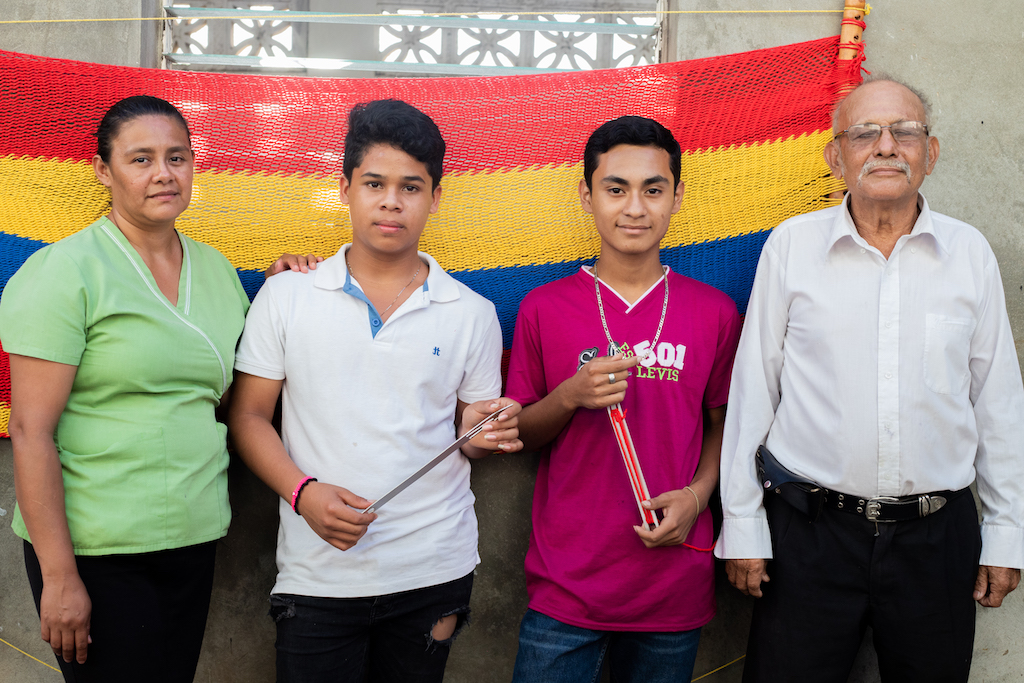 Gema, Pedro, Ariel and Roberto pose in front of a completed hammock.

Many youth in this community are pushed into drug addiction, alcoholism and delinquency, but at Christ is the Answer child development centre, there is a clear vision of the work that lies ahead and the difference that it can make.

“We want them to be agents of change, not only in their families, but in their communities as well. We want them to see that they’re not here to waste their youth. The Lord has a purpose for them,” Byron says.

This workshop has done far more than simply teach students a craft. It has helped them develop an entrepreneurial spirit and taught them the importance of learning new things every day.

“I thank God for the church’s partnership with Compassion, because I can see it is truly changing the lives of the children in our community,” Gema says.

Older children are often overlooked for sponsorship, but like Ariel, Pedro and their peers, they need the inspiration and motivation to shape their future—a future free from poverty.

Will you be that inspiration?

Words and photography by Junieth Dinarte