Our clothes tell a story. They can tell where we come from and who we are. Culture is expressed in fabrics, textures, colours and beadwork. Our clothes can connect us to community as well as distinguish us in our diversity. For Compassion children around the world, donning the cultural dress of their tribe is a special way to communicate a significant part of who they are and the people and culture that have shaped them.

We invite you to travel through eight African countries to take in the stories that are told in the cultural attires of the Compassion kids who live there. There is history hemmed into the folds of every fabric and a thread of community that weaves the stories of family, culture and country together.

Clothing tells a story. Today, let’s listen in and celebrate the rich and beautifully diverse children of Compassion in Africa. 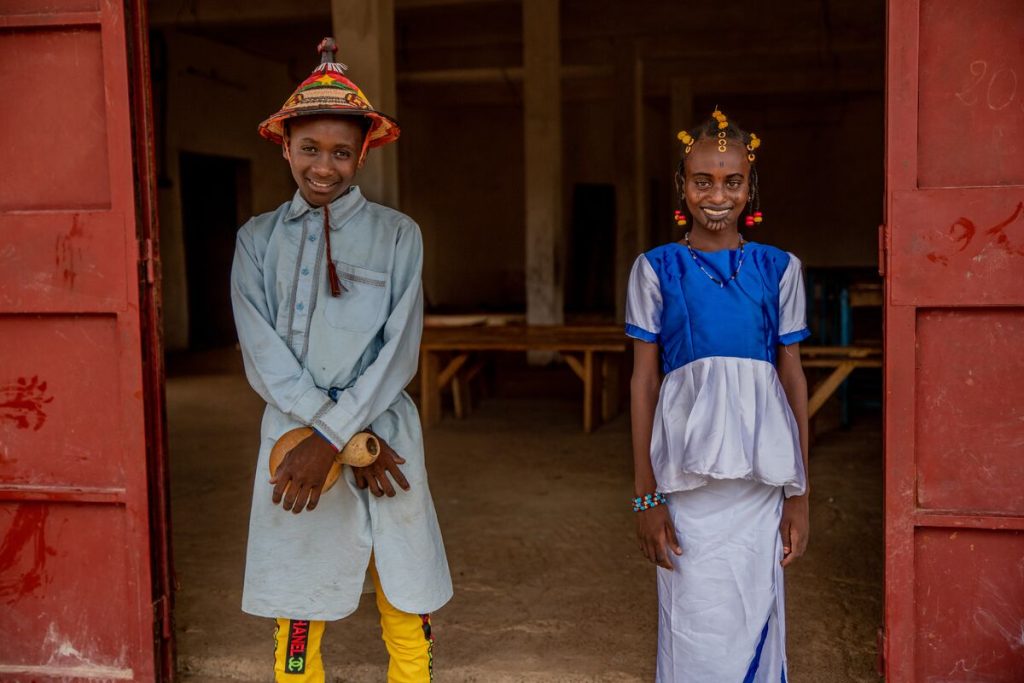 Abdoul and Oureira are children from the Fulani tribe in Burkina Faso. 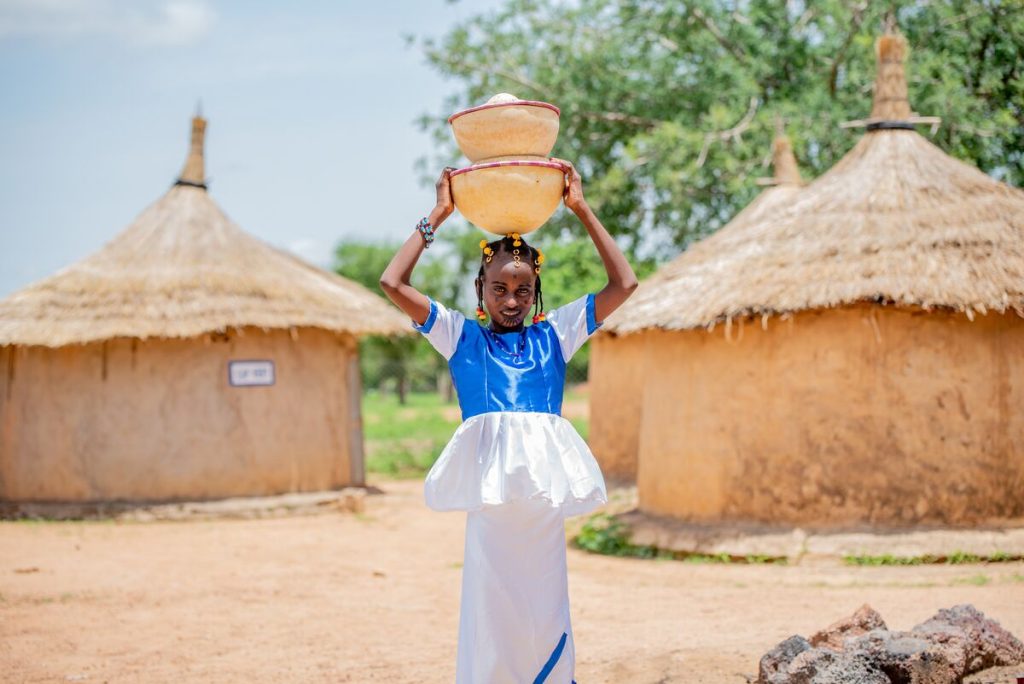 Fulani girls decorate their hair with beads and cowrie shells. They also decorate their hands, arms, and feet with patterns painted with the natural dye of henna. They wear long dresses and colourful necklaces and bracelets are very popular among Fulani girls.

11-year-old Oureira says, “I wear a hairdo called ‘Rononkene Yougoure’, meaning ‘I am carrying a pot on my head’. I love to put makeup on and enhance my beauty with yellow and red beads, a necklace, and a bracelet before going out on special events in the village such as weddings, and traditional dance shows.” 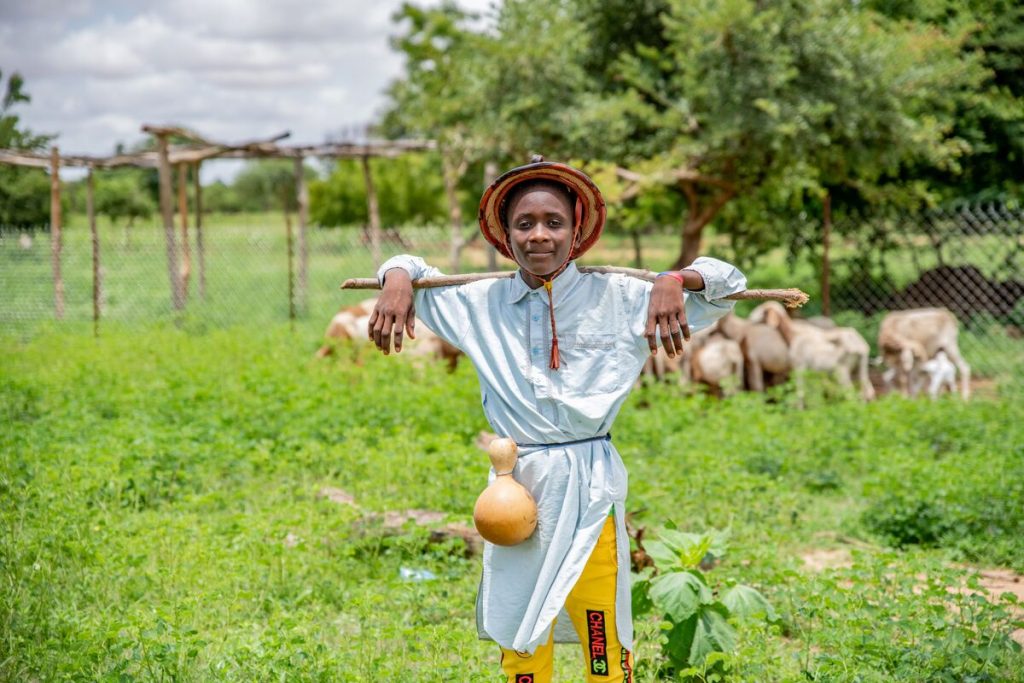 One of the features of the Fulani’s traditional attire is the men’s hat. Usually, the boys wear a hat with a multicolored design made of straw and leather called Noppiire. As part of their culture, a Fulani boy is expected to know how to weave a hat of fresh grass while herding the cattle.

“I love to shepherd the sheep of my parents like King David in the Bible. When I look after the sheep, I need a stick, a straw hat, a raincoat, and a calabash water cup,” Abdoul says. 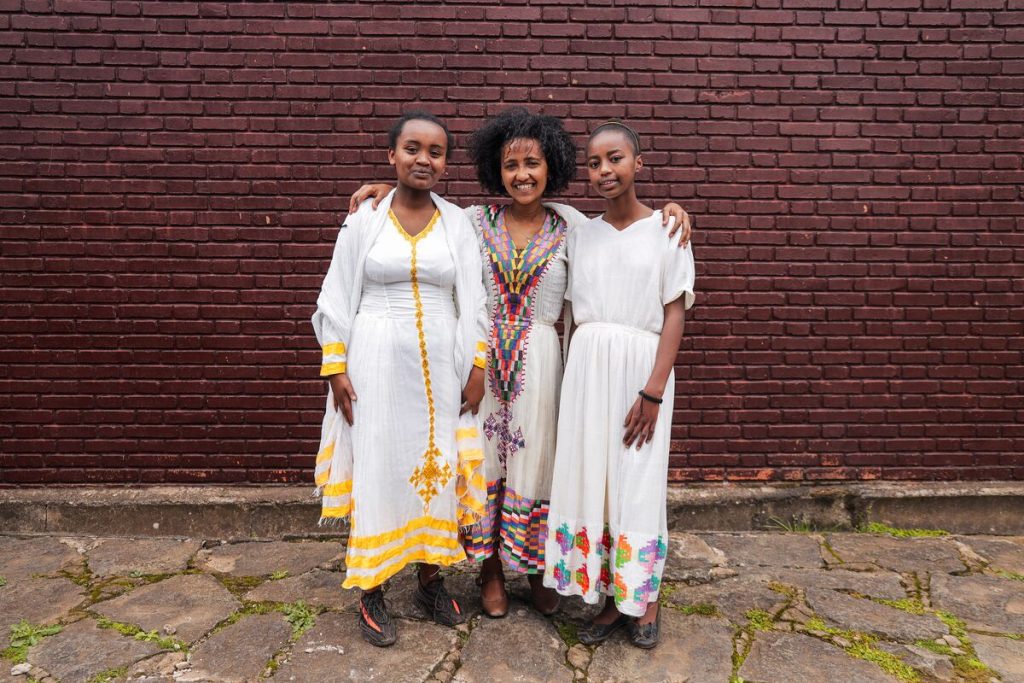 Elsabeth, Miss Aster and Addis are Habesha people from Ethiopia and are wearing Habesha Kemis which means ‘the dress of the Habesha.’ 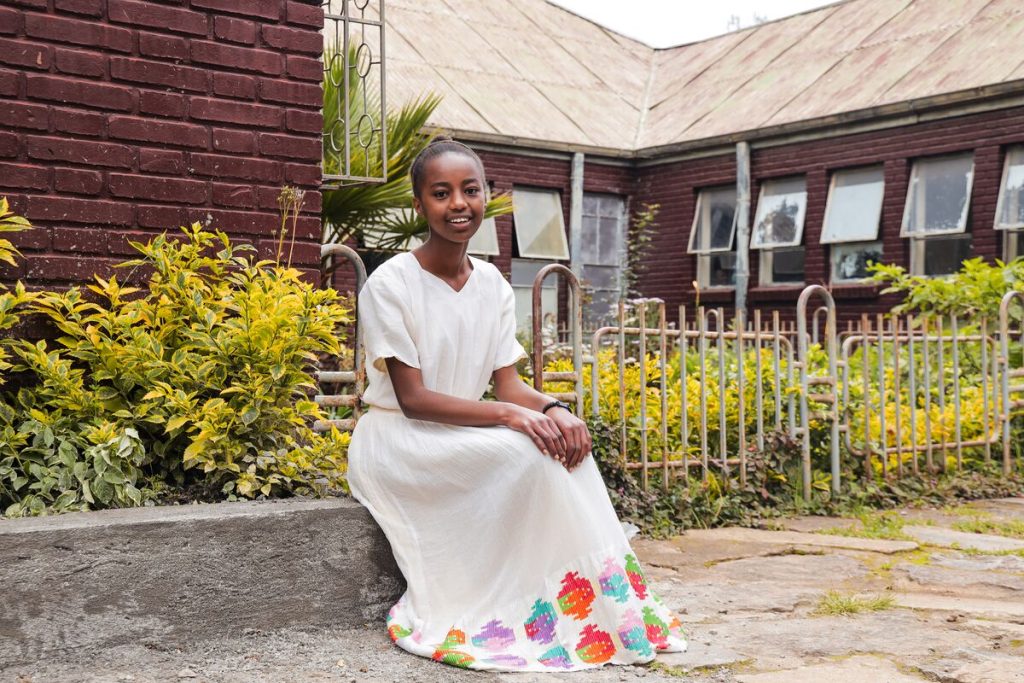 This dress is usually made in shades of white, beige or gray. Commonly, there are shiny threads that are woven into the fabric to create different patterns. It often falls to the ankles and is matched with a shawl. It is worn commonly at formal events, holidays and celebrations. 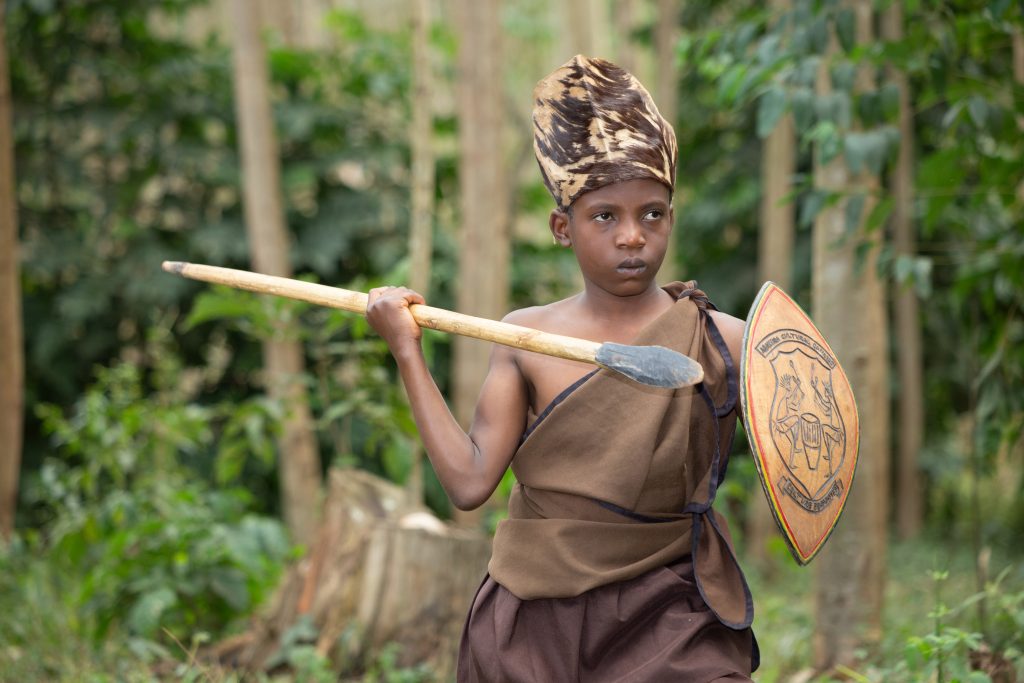 Rohi, a 10-year-old dresses in the traditional hunting attire for the Bakiga people in Western Uganda. 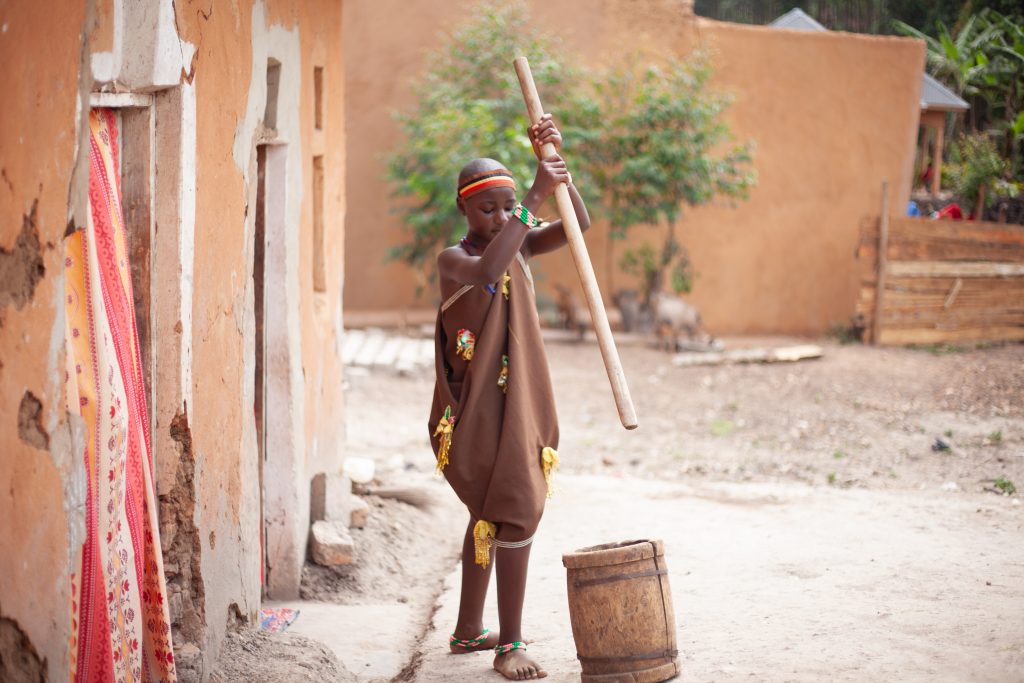 Nine-year-old Blessing is dressed in the traditional Bakiga dress called ekishaato. This dress is worn with bangles, anklets, waist beads and a beaded head band. 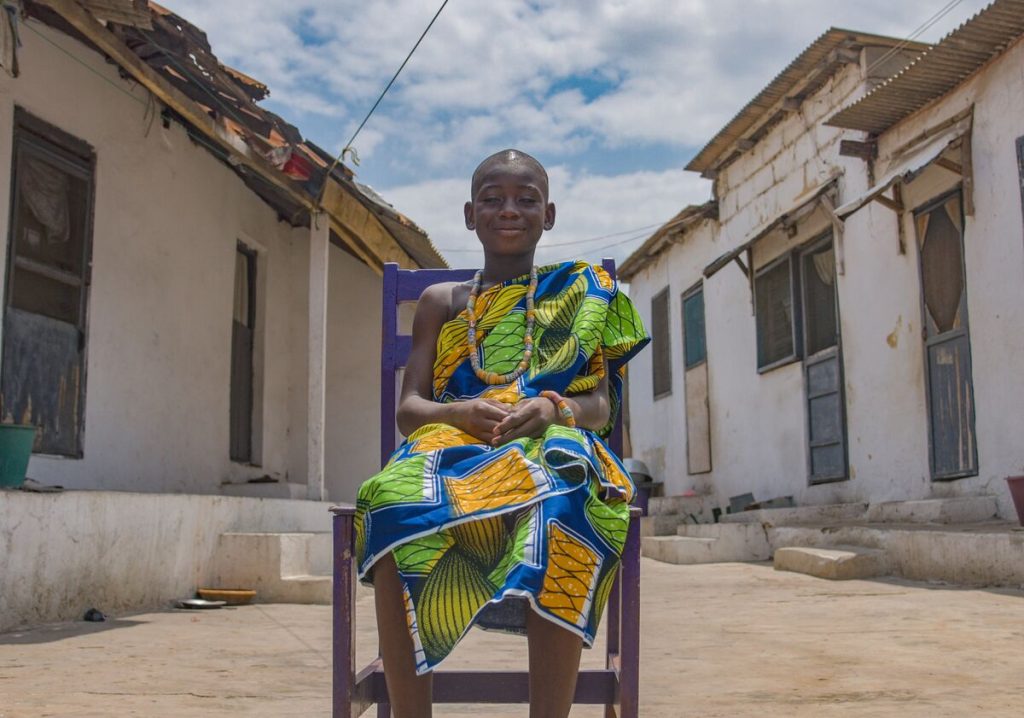 The Ga people make up one of the largest ethnic groups in Ghana. Nii Bonney is an 11-year-old Ga boy. To show off his tribe’s traditional clothing, he dressed in kwadjan, a style of wrapping fabric around the body. The kwadjan is usually paired with traditional slippers, beaded or solid gold jewelry and shorts. 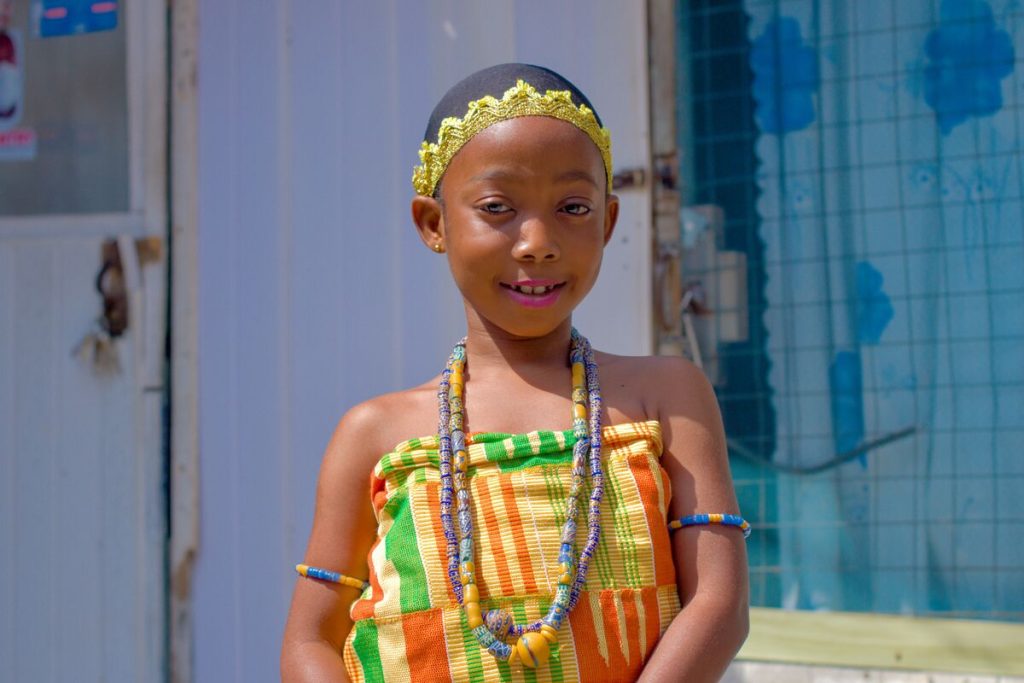 Mary is a nine-year-old Ga girl from Ghana. She dressed as an Ohemaa (queen) in full regalia. The material is colorful kente fabric. It is a valuable fabric and is seen as a status symbol across the country. It’s worn with beaded or solid gold ornaments and ahenema, traditional slippers. This style of dressing is commonly used at festivals and other formal functions. Many Ghanaian brides dress like this during their traditional wedding ceremonies. 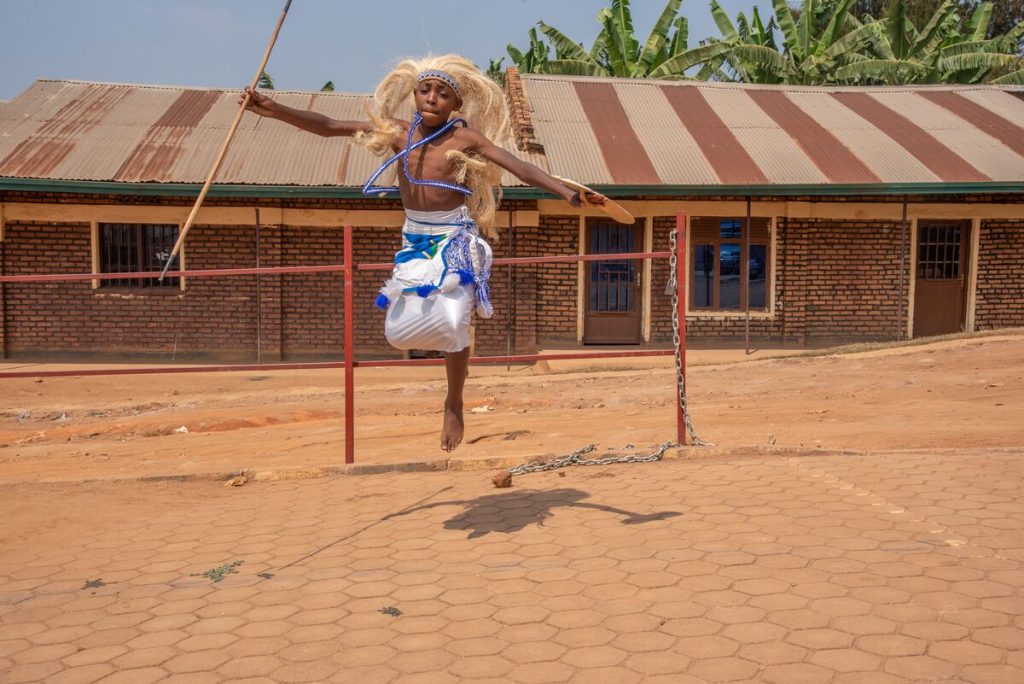 Elie, a 13-year-old Rwandan boy, demonstrates a significant dance in the traditional dress. Music and dance are an important part of ceremonies and social gatherings in Rwanda and the most famous traditional dance is Intore. Intore means warrior and is the dance of heroes. The Intore dress up in headgear called Umugara made of sisal fiber, representing a lion’s mane. The men also wear beads which usually match their wrap-skirt and tie small bells on their ankles that give a thrilling rhythm for each step the Intore makes. As the warrior dances, he holds a spear and a shield. 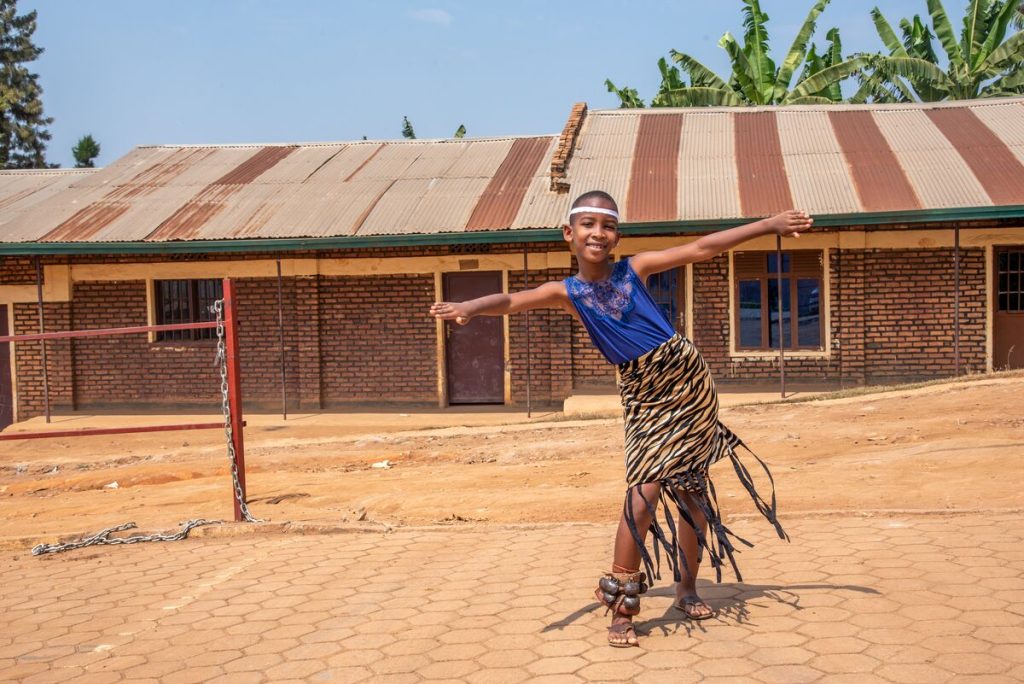 Eight-year-old Kellia from Rwanda was excited to wear the traditional clothing of her culture. It is clothing that represents celebration. When dancing, girls wear a vest and a short wrap skirt with strings at the bottom called Ishabure. This is paired with bells on their ankles.

“It is the first time I have worn Ishabure and I’m happy. I have always seen older girls at the project wear it when they are going to dance for visitors at church. I hope that one day I can own Ishabure,” she says. 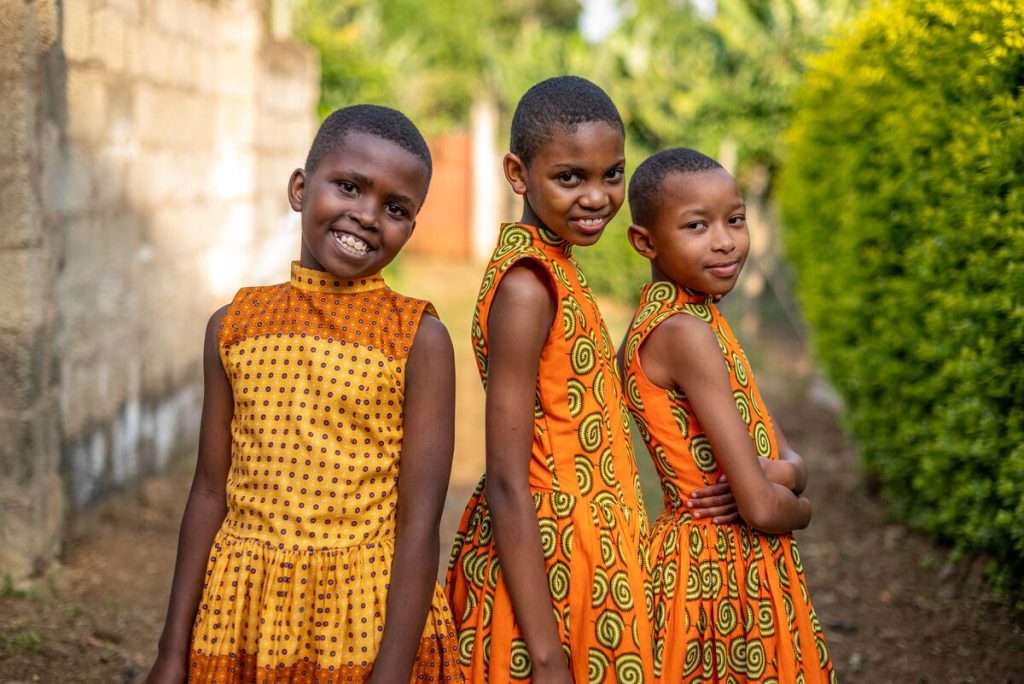 Irene, Precious and Catherine wear kitenge dresses, which is a fabric that is worn by more than 100 tribes in their country of Tanzania. 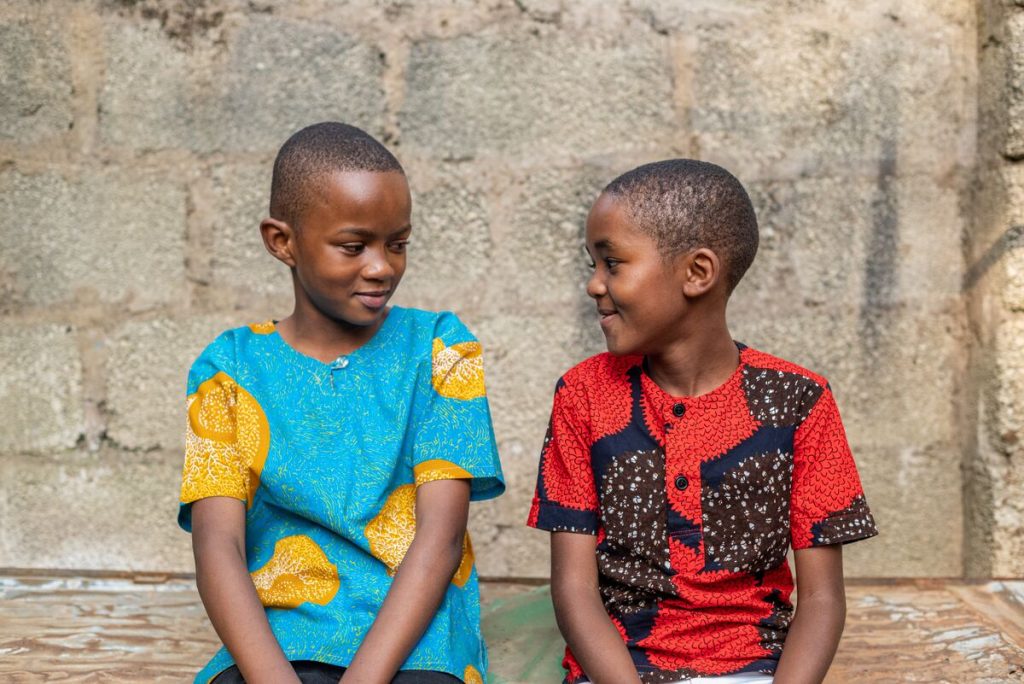 Prince and Joshua wear shirts made of the kitenge cloth that made its way through every tribe in Tanzania and has become part of their cultural identity. 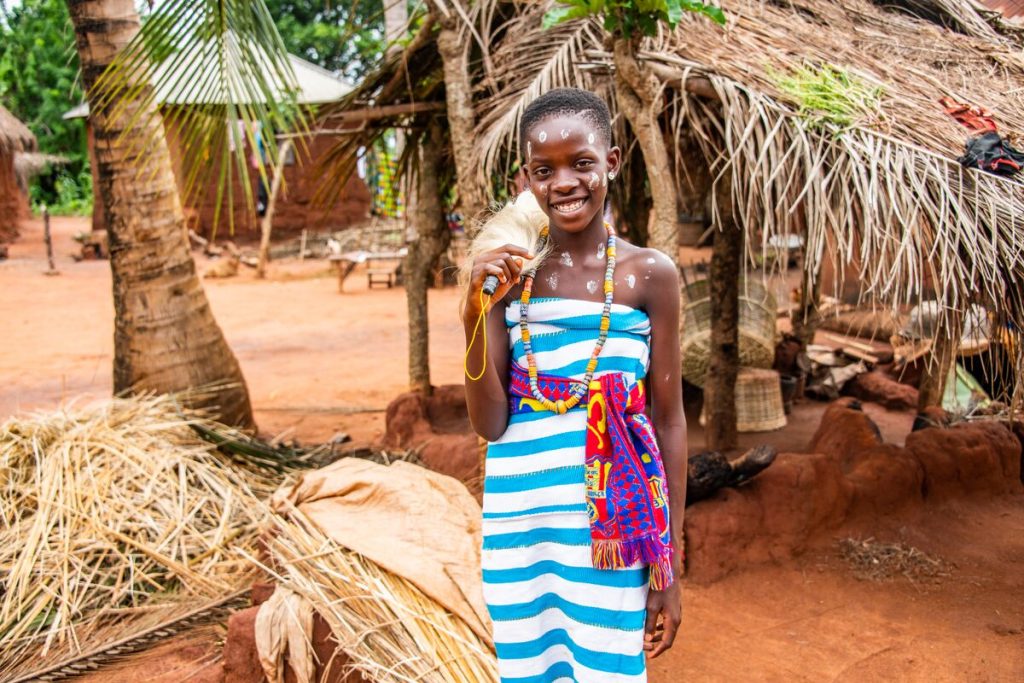 Sylvia is from the Ewe tribe in southern Togo whose tribe is recognizable by their colourful cultural attire. The main components of their dressing are lokpo and beads. Lokpo is a soft fabric that is traditionally hand-made with cotton strings. The lokpo is worn differently by men from women, also depending on age. Young ladies and girls do not wear their Lokpo the same way married women do. 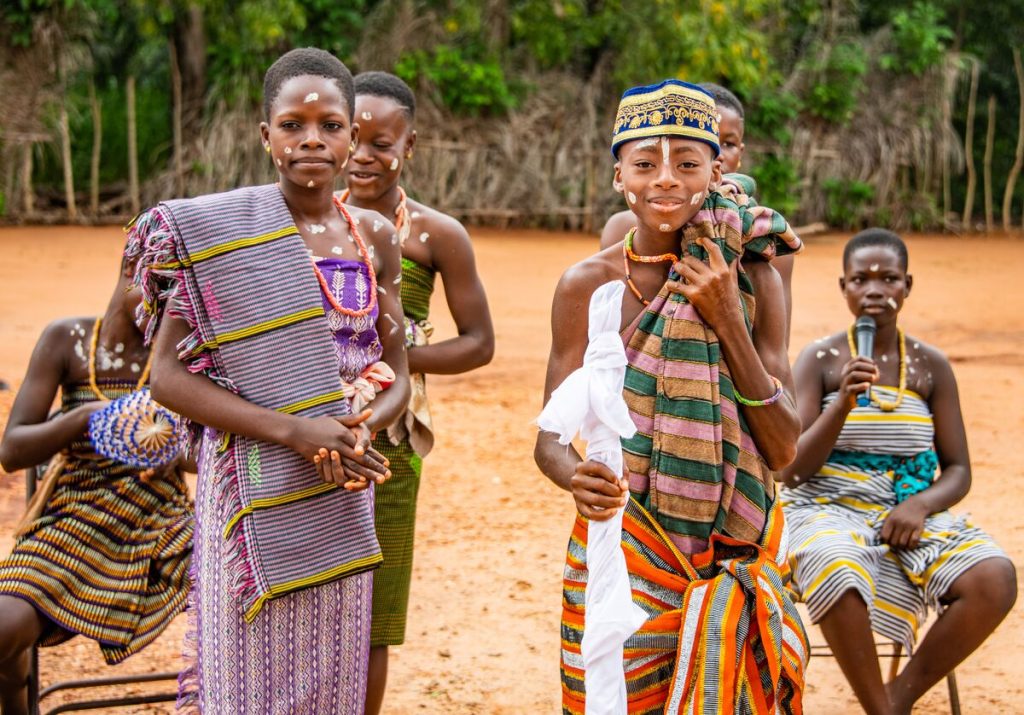 Children from the Compassion centre are dressed up in the traditional way to represent an Ewe royal couple: King and Queen. 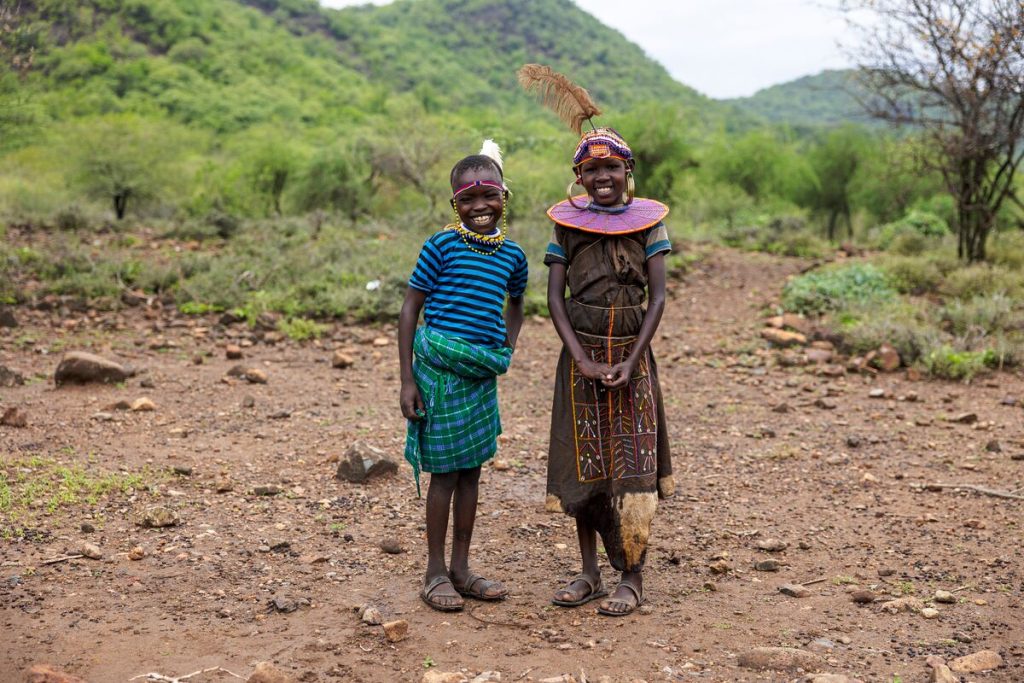 Paul and Salina are from the Pokot tribe in Kenya. They are wearing the traditional clothing that distinguishes their tribe from the more than 40 other tribes represented in their country. Girls will wear goatskin dresses and boys wear a shuka which is a cloth made from cotton. Intricate beadwork is a part of both of their traditional attire. 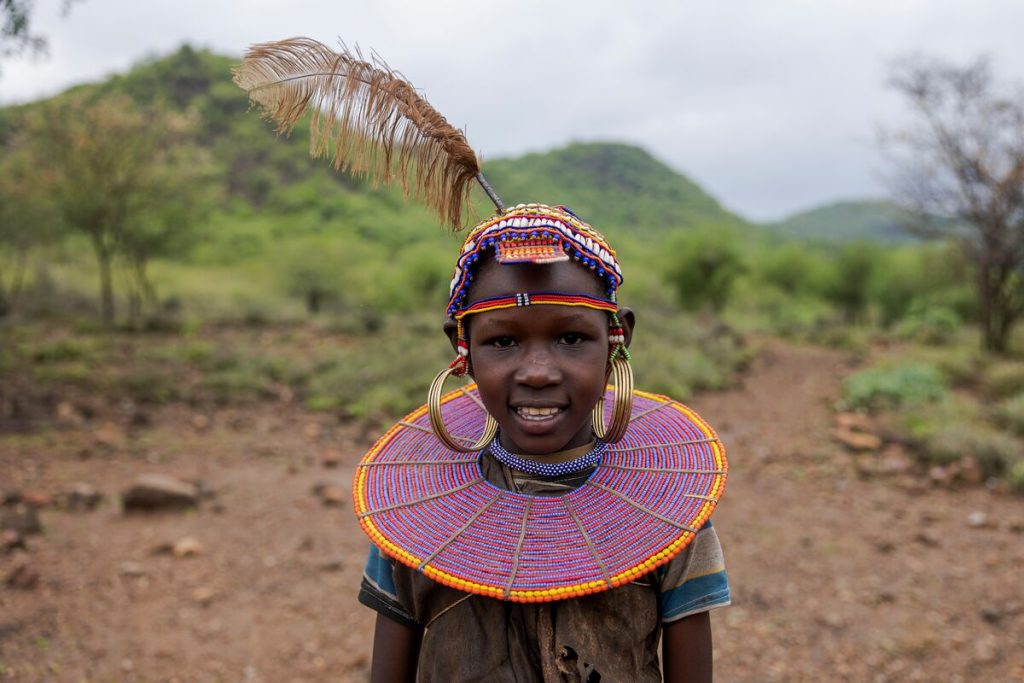 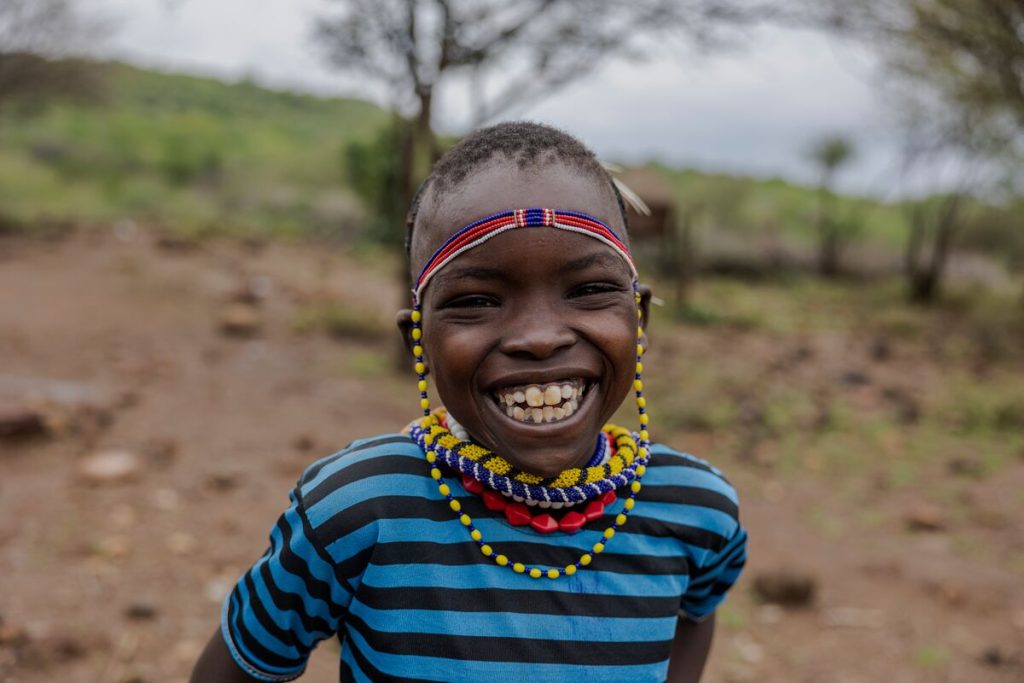 Culture, clothing and community are beautiful things worth celebrating.