The grandeur of Mount Kenya, seen from the fringes of the small Kenyan town of Olmoran, is a far cry from the reality that the community faces.

In Olmoran, poverty is rampant. Unrelenting unrest and violence endure in the community. Having been raised in Olmoran, Pastor Richard Mwangi understands the intricacies of life here very well.

“I have witnessed children rendered motherless or fatherless. I shed tears whenever I see the suffering they endure. Many children do not go to school because their parents are illiterate,” Richard says.

In 2011, Richard was ordained as the senior pastor of Olmoran Deliverance Church. He was optimistic that he could finally effect change. Aware that the task ahead was not simple, Richard devoted three days to prayer and fasting, seeking God’s will. 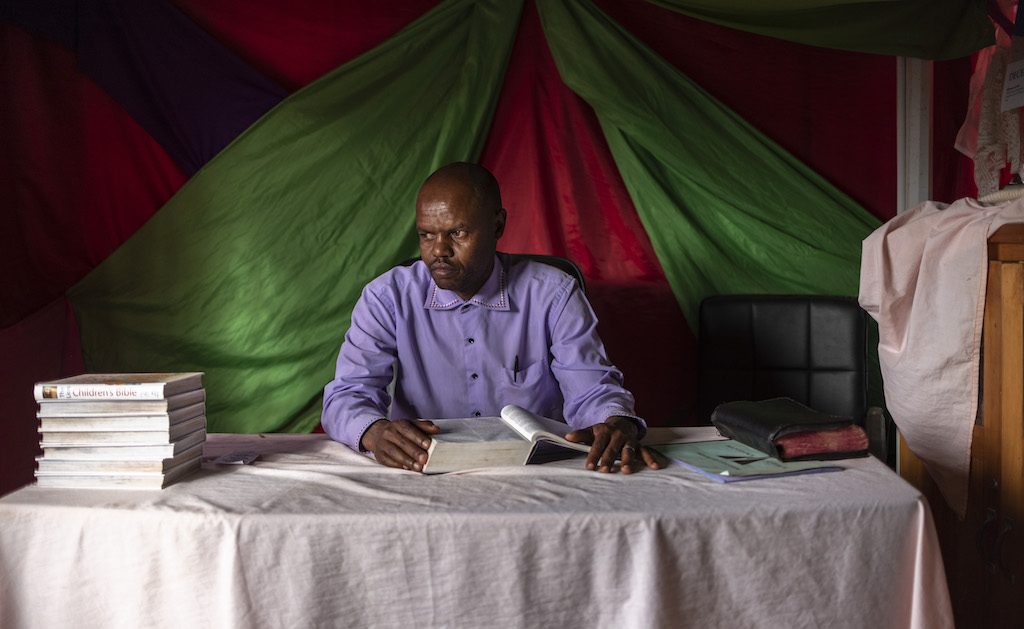 “God gave me the scripture of Habakkuk 2:2-3. I was energized and immediately wrote down my vision: to see suffering children happy once again, going to school, taken care of and protected,” says Richard.

Then the Lord replied: “Write down the revelation and make it plain on tablets so that a herald may run with it. For the revelation awaits an appointed time; it speaks of the end and will not prove false. Though it linger, wait for it; it will certainly come and will not delay.”

In the following months, Richard worked to make this vision a reality. He began by starting a school at the church in 2014. Richard envisioned a day when the school would also serve as a rescue centre—a refuge for vulnerable children.

However, despite their best efforts, the church was unable to keep the school afloat. “Teachers had not been paid for months, and there were no supplies to keep the school running. I had to close it down a few months after it started. Sending the children away after giving them a glimpse of hope was the most agonizing part,” Richard recalls.

Despite feeling forsaken by God, Richard immersed himself in his pastoral duties, unwavering in his resolve to trust God. 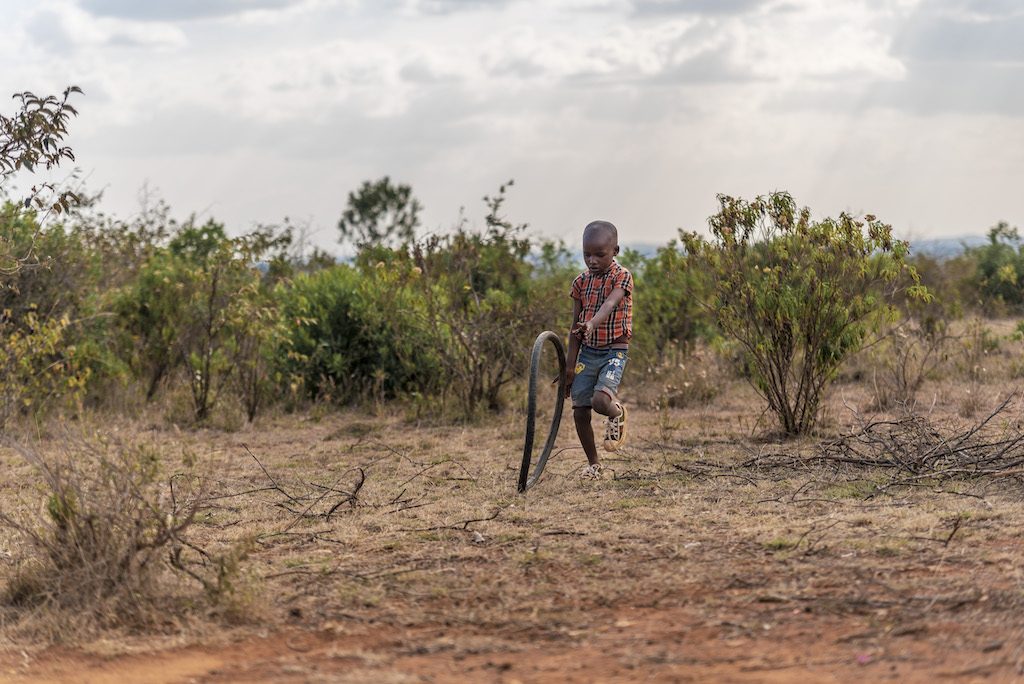 “Although the shame of failure lingered over me, I purposed to serve faithfully. Despite everything, I had to be a positive example and show that obedience to God is paramount even when things aren’t going our way,” says Richard.

About a year later, Richard learned of a ministry called Compassion that intended to expand to his region. A meeting was arranged. Richard felt an immediate attraction to the ministry. It marked the revival of his vision. “Is it true that I really could revive a dream that I had given up on? I asked God. I felt God affirm the vision I had written through His Word. I wrote it in bold letters: ‘Even if it shall tarry, it shall come to pass’ (Habakkuk 2:2-3),” says Richard.

It was a long process with numerous meetings. From an initial 46 candidate churches from the entire county, the number dwindled until there were only six churches being considered. In the last meeting, Richard was told that his church had fulfilled all the partnership requirements, and a partnership agreement was signed.

Richard’s vision was not only revived—it was on its way to being fulfilled.

With help from Compassion’s children’s ministry launch funds and contributions from Richard’s congregation, the church constructed and equipped a kitchen, classrooms, latrines and an office block. Like Richard had envisioned, the church became a place of refuge for children in the community. 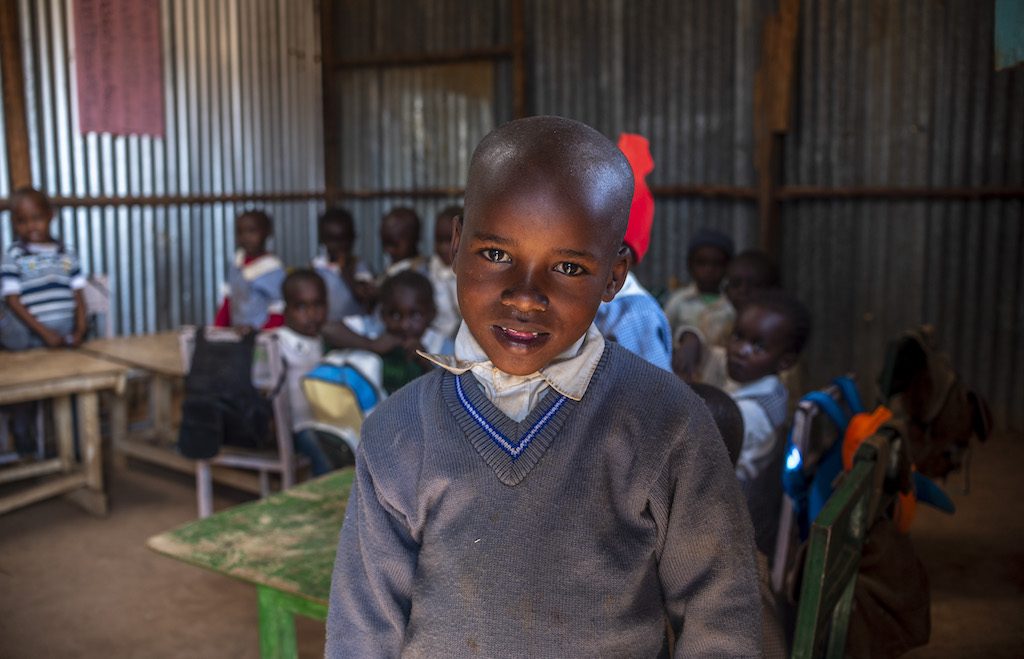 John in his classroom at the child development centre at Pastor Richard’s church.

John Kamama was one of the very first children who was registered.

His mother, Chabarkot, is a single mother of seven children. Surviving in Olmoran can be a daunting task, especially for a single woman.

“The family had gone through a lot and really needed assistance. None of the children were going to school,” Richard recalls. 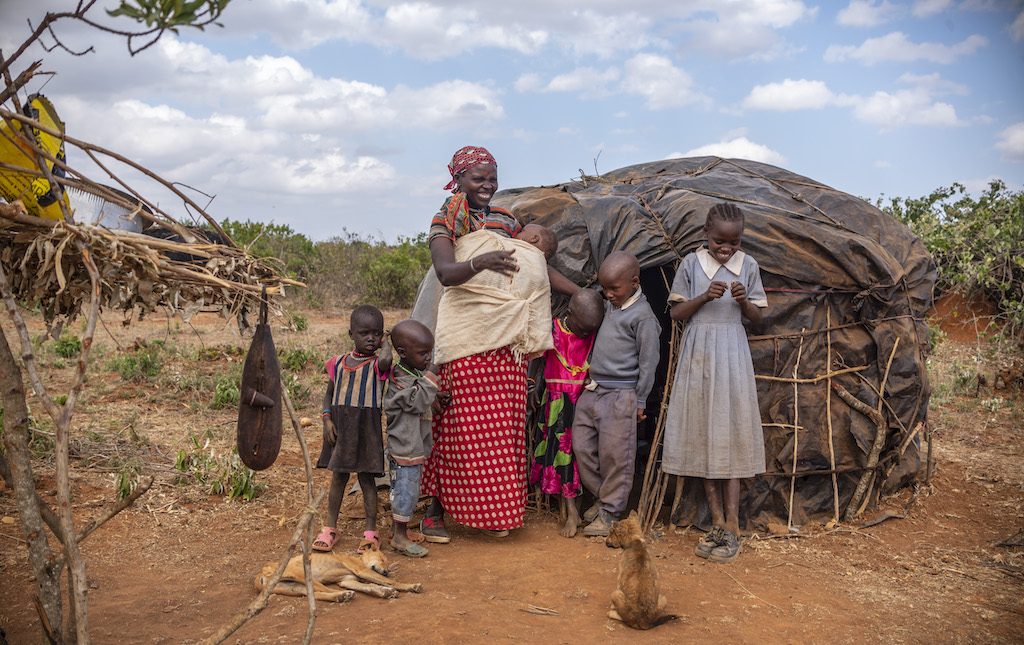 Chabarkot and her family outside the hut that they call home.

John was immediately enrolled in the church school. The Compassion centre paid for his school uniform and school supplies.

“I believe the church provides a holistic and sustainable approach to addressing poverty.”

John is now eight years old and is a grade one student. With all his fees paid up, he can afford to dream. “I want to be a teacher when I grow up,” he says. John’s siblings are also benefitting from his sponsorship and the church’s partnership with Compassion—his sister Jasmine is now able to be enrolled at the church’s school too, despite not being a sponsored child herself.

Pastor Richard is confident that the partnership with Compassion has helped Olmoran Deliverance Church reach more children and families living in poverty than they ever could have otherwise. It’s a partnership that empowers one of the most effective institutions on earth. As Pastor Richard says: “I believe the church provides a holistic and sustainable approach to addressing poverty.”

You can equip pastors with vision like Pastor Richard’s by donating to a Children’s Ministry Launch fund.

Words and photos by Isaac Oglia