A horrific attack by fire: one year later 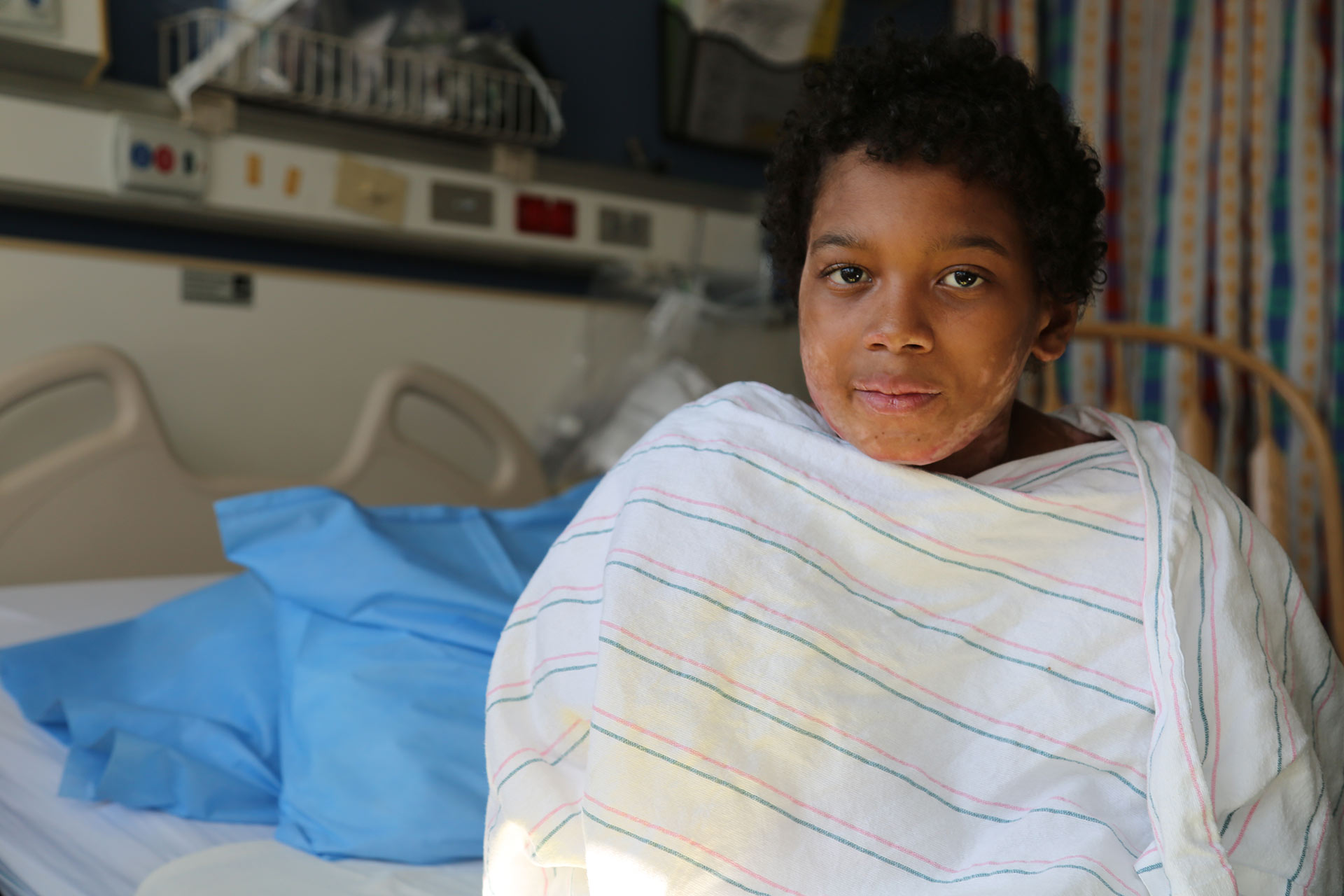 11-year-old Steven was the victim of an unthinkable crime. But now he is finding slow healing through the rallying of community.

Along the riverside one Sunday afternoon, Steven’s life took a radical turn.

11-year old Steven grew up on the Pacific coast of Ecuador, in the coastal city of Esmeraldas—a unique community surrounded by lush jungle and beautiful beaches. For a city with eternal summer temperatures, the Esmeraldas River was the perfect place to play, dream and cool off for local kids. And that’s exactly what Steven did anytime he had a chance.

But on a balmy afternoon in May of last year, Steven could have never imagined that the place where he loved to play and find peace after church would be the very place he would experience an act of torture.

On his walk home from church where he attended Compassion’s program, Steven decided he would stop by the river. He quickly realized something was off when three teenagers approached him, aggressively asking him to play.

After repeating his desire to play alone several times, the three took Steven by force—bound him, covered him with gasoline and set him on fire.

Steven immediately ran into the river to smother the flames.

Steven was rushed to the local hospital where he received basic medical attention. Realizing the severity of his condition, doctors transferred him to a private hospital in Quito, Ecuador—half a day’s travel outside of Esmeraldas, where he would get more specialized medical treatment.

Steven had third-degree burns across 65 per cent of his body, and multiple organs—including both kidneys—were failing. His condition was quickly turning from complicated to life-threatening, with a very slim chance of recovery.

After Compassion learned of Steven’s attack, prayer requests went out globally to urgently pray for Steven.

“Sometimes doctors [said] ‘Steven has only a few hours of life.’ But my brother is still alive. God is with us,” declared Steven’s close sister Karina—who would quickly become a stronghold for Steven’s journey.

Karina courageously did what it took—even dropping out of school—to be right by her brother’s side at every turn. She started to see God working to heal her beloved brother. Steven began to exceed doctors’ expectations—his numbered days became victorious months. Steven was daily blanketed by the prayers and generosity of his family, local church, global Compassion family, donors, doctors and his sponsor.

As word spread throughout the media of Steven’s battle, global organizations—including Compassion— began rallying their resources to help pay medical bills for Steven, even ensuring he would be transferred to a state-of-the-art medical facility for more specialized attention.

Only weeks later, Steven and Karina were air-lifted to a US burn unit to start the journey of rehabilitation.

Singing through the sorrow

Although the process was gradual and painful, Steven began responding well to treatments and surgeries in the US facility. Putting one foot in front of the other each day, he began reaching new milestones—from being released from the Intensive Care Unit within just a few months, to focusing on physical therapy, winning victories of eating on his own, sitting up in a chair and eventually walking once again.

With physical wounds healing, Steven would still have to face the lingering psychological impact of the attack. Through Compassion’s support, he began working with a counsellor to help him process his grief, and how his life would change because of it.

He would also find healing through song.

“Yo quiero enamorarme mas de ti,” his mother would sing to him over the phone from Ecuador—“I want to fall more in love with you.”

This worship song—one of his favourites to sing at his Compassion centre—became a song of comfort as he lay in his hospital bed. 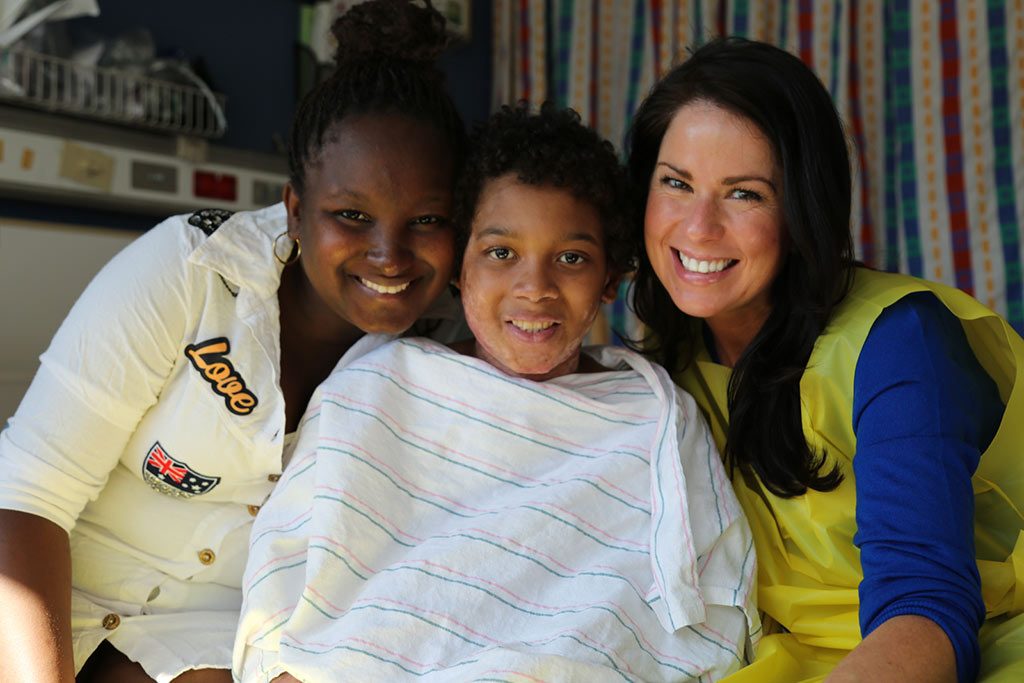 Cory, Steven’s sponsor, was able to visit Karina and Steven at his recovery unit in the US.

After a final surprise visit from his Compassion sponsor from the US, Cory—who shared time playing, singing and dancing with him—Steven and Karina were ready to head back on a bittersweet journey home in late October.

In victory and in pain

Though worried about his scars, Steven was embraced by his community as soon as he stepped off the plane. From his family and friends to the President of the Republic of Ecuador—Steven was welcomed home warmly by the cloud of witnesses who had rallied for him as he fought for his life over the past long months.

Today, Steven is finding newfound stability in Ecuador. With the hope of living closer to medical care, Steven and his sister moved several hours away from his hometown and enrolled at a new school and Compassion centre.

Steven is finding restoration in his new community, eager to establish new connections and get back to his old self. He is still bravely facing all the therapies, check-ups and treatments necessary for a full recovery, as well as meeting with a mentor to give him on-on-one support as he journeys into adolescence. 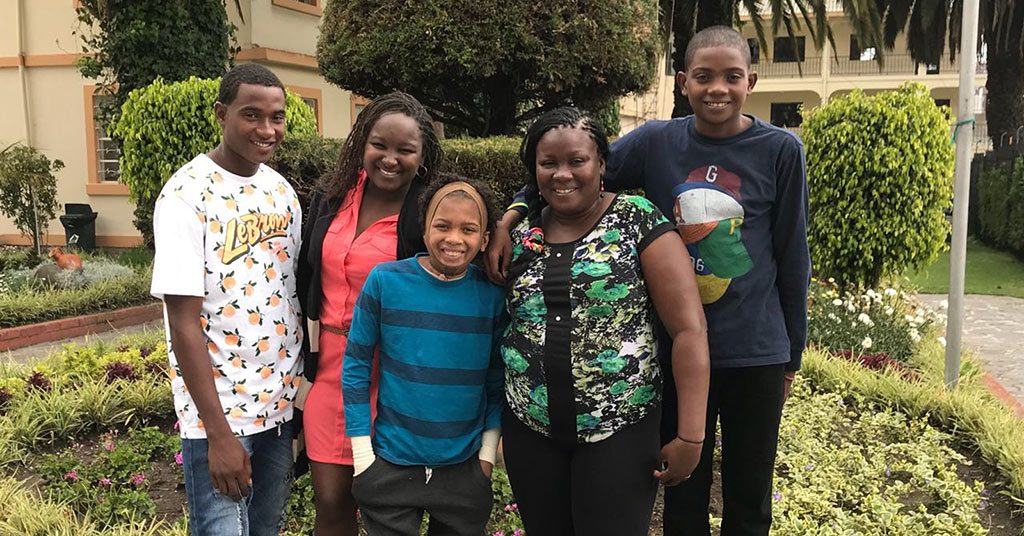 Steven’s family gives him a warm welcome back home in Ecuador.

He will likely return to the US in 2019 for more surgeries—a trip he will likely take multiple times over the next many years of healing.

Steven has been able to journey back periodically to his hometown without fear, talking about his experience with others. He doesn’t feel afraid—but instead, feels supported and safe in the company of his family, his church and Compassion, his lifelong fan club.

The three teenagers who tortured Steven have been sentenced to eight years in prison. The road to healing is long and seeking to offer forgiveness in the midst of it can be heart-wrenching. Steven’s family—specifically Karina—asks for prayer that God would show them the way to forgiveness.

May we be encouraged by their example of seeking to extend radical grace to those who damage us. Let us journey with them in praying for continued healing, restoration and forgiveness in the months and years ahead.

May we together with Steven’s family, long for the day when all things broken are restored.*

“He will wipe every tear from their eyes. There will be no more death or mourning or crying or pain, for the old order of things has passed away.” Revelation 21:4

Violence is a dark part of our world, but we have the opportunity to work with God in restoration. By journeying with a child through sponsorship, you can be a part of the community that supports a child through the joys and pain of daily life. Support a child from Ecuador today.