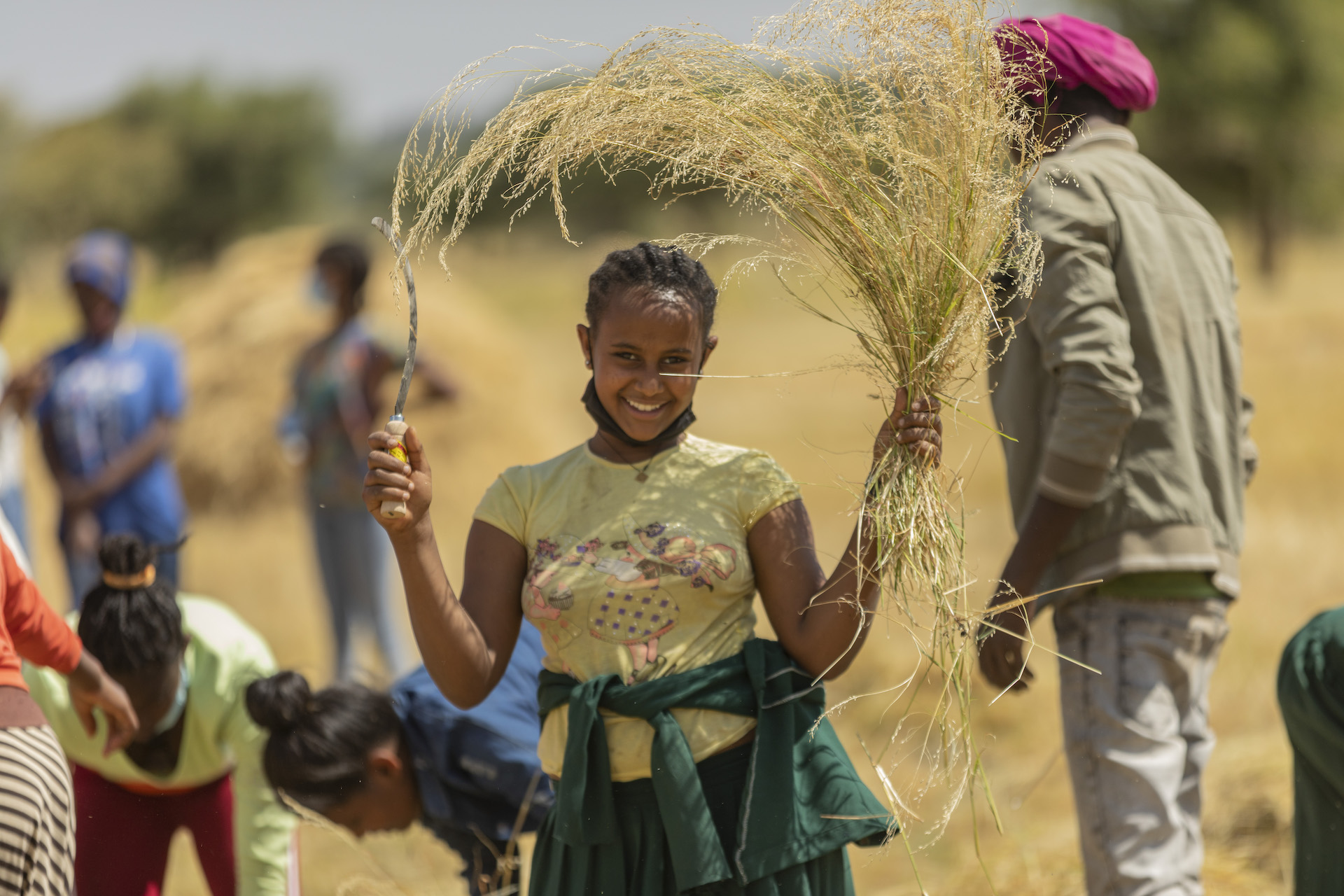 Hearing about a plague of locusts might cause you to think of the famous Bible story told to you in Sunday School. For 46-year-old Behailu, a farmer in Minjar County, Ethiopia, hearing of locusts reminds him of stories told by his father’s generation of farmers.

“Our fathers used to tell us how the locusts’ impact left them hopeless, taking away their food and livelihood. We listened as though it was a folktale,” he says.

But unfortunately, today the threat of locusts is no longer just a folktale for Behailu and other farmers in East Africa—it’s a nightmarish reality.

The invasion began in October 2020, when the desert locusts first invaded seven of the major wheat and teff producing counties found east of Addis Ababa. Riding the winds, swarms of ravenous locusts blanketed the sky, ready to devour months of hard work within hours. When these locusts descend, nothing is left behind, not even fodder for the cattle. Farmers watched helplessly as most of their harvest was destroyed. 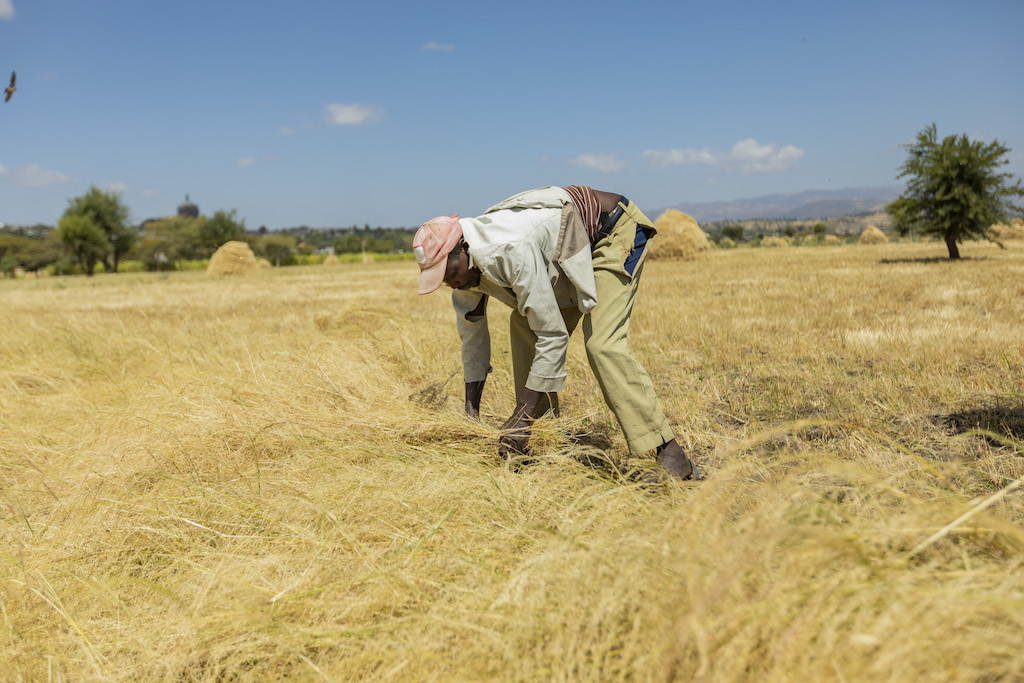 Behailu works in his fields.

In neighbouring Minjar, Behailu watched the skies with dread, desperately hoping that his county would not be next. The father of seven depends on his harvest to feed his family and make ends meet, even more so during the COVID-19 crisis. Whenever he watched the winds rustle through his crops, it wasn’t the usual sense of pride that filled his chest—rather, it was an immense anxiety as he prayed the next gust wouldn’t be the one to bring the dreaded swarms.

As the agriculture bureau conducted aerial sprays of pesticide to kills locusts, they advised all farmers to do whatever they could to harvest their crop as quickly as possible. But for many, including Behailu, this was easier said than done.

“Because of high demand, hiring help became unaffordable,” Behailu says. “As much as I worked hard, when the day ended, the field looked untouched. I said to myself that I would be lucky if I could save something for my kids to eat.”

The outlook was grim. But thankfully, Behailu wasn’t facing the crisis alone.

The local church steps up

“What affects them, affects us!” says Pastor Solomon of Areti Mulu Wongel Church, Compassion’s local church partner in Minjar. The church has been a Compassion partner since 2011 and is active in the community, known for its commitment to releasing children and families from poverty in Jesus’ name.

“We wanted to pass the message [to the farmers] that we stand by them whenever they need support. It was the least we could do.” 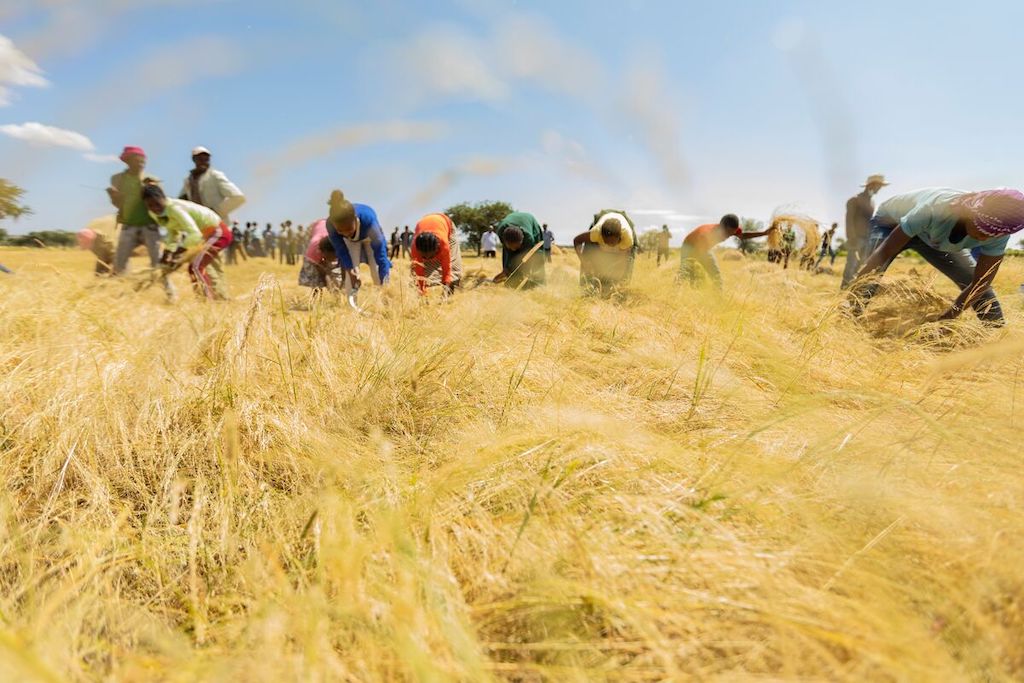 When the locusts threatened the food security and livelihood of their neighbours, they stepped up.

“As part of the community, when the plague came to the neighbouring counties and when we saw the devastation, we decided to coordinate the church members and mobilize the youth to help the farmers with their harvest,” says Pastor Solomon. “We believed it was better to do preventive work than rehabilitation. We also wanted to pass the message that we stand by them whenever they need support. It was the least we could do.” 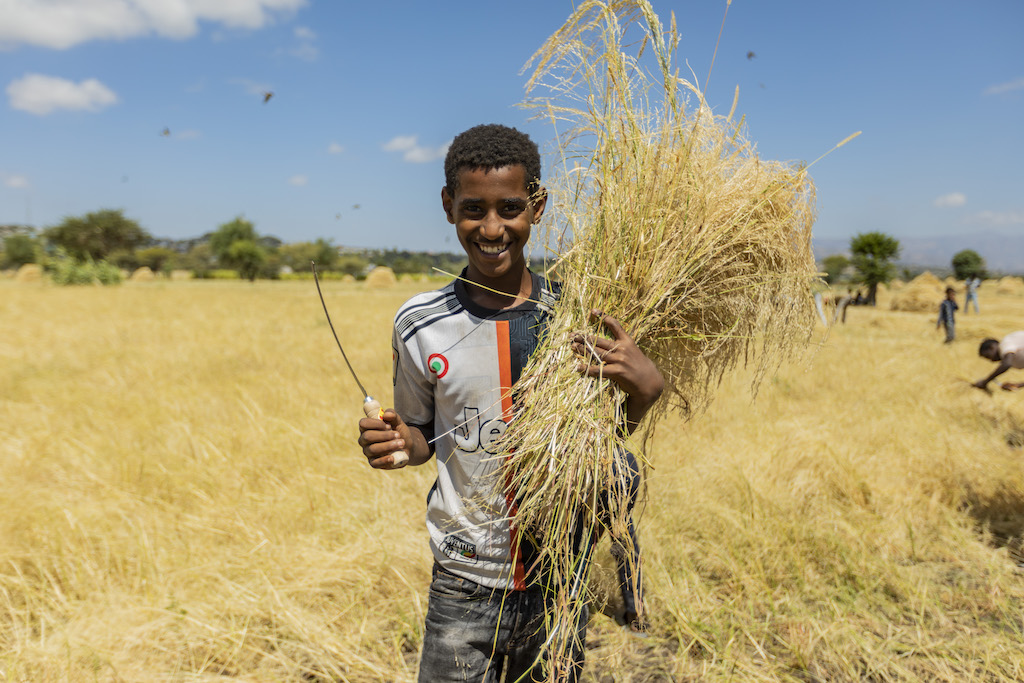 “We were intentional when we included the students in the program. They are the ones who will take over the country, so we want to shape them early on.”

The church provided equipment and volunteers, and also secured additional help by hiring daily labourers to work alongside the volunteers.

Saved from hunger and bankruptcy

Behailu was the first farmer to receive support. His daughter, 15-year-old Dagem, is a Compassion-sponsored teenager. She had become familiar with her father’s distress and was incredibly thankful for the support of her friends at the local church and Compassion centre. 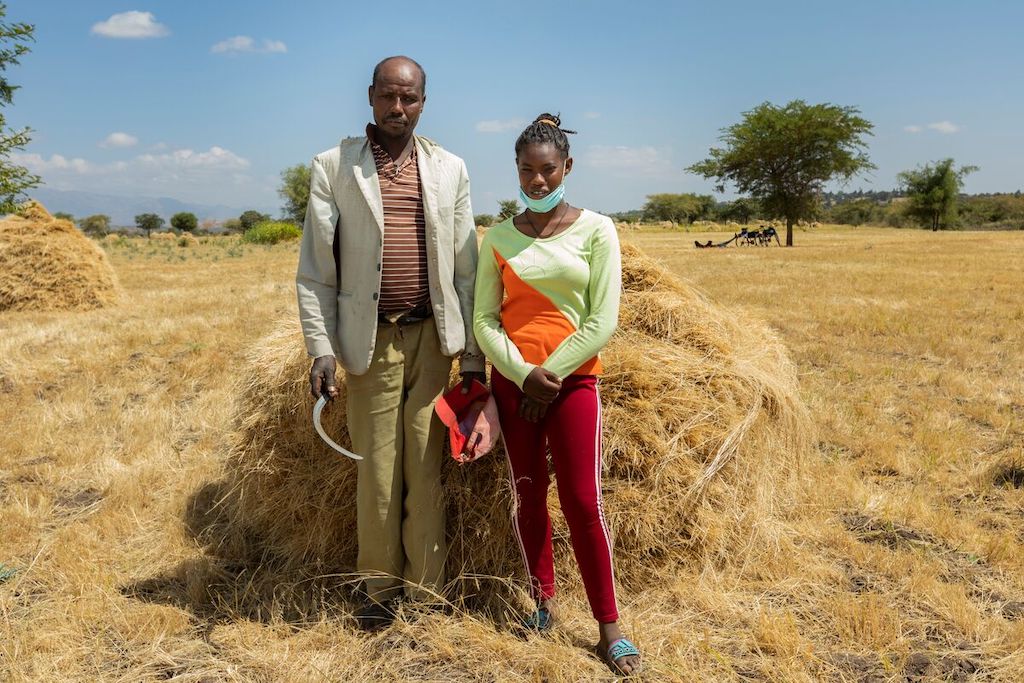 “It was easy to see my father’s stress. We were all worried,” Dagem shares. “However, after the church and my friends from the Compassion centre helped with the harvest, my father was relieved. I consider myself very lucky to be part of a community that cares about me and my family.”

“The work that could’ve taken me weeks was finished within hours. They were a godsend.”

Behailu was overwhelmed by the support, thankful that he would never know what would’ve happened if his harvest had been lost to the locusts. 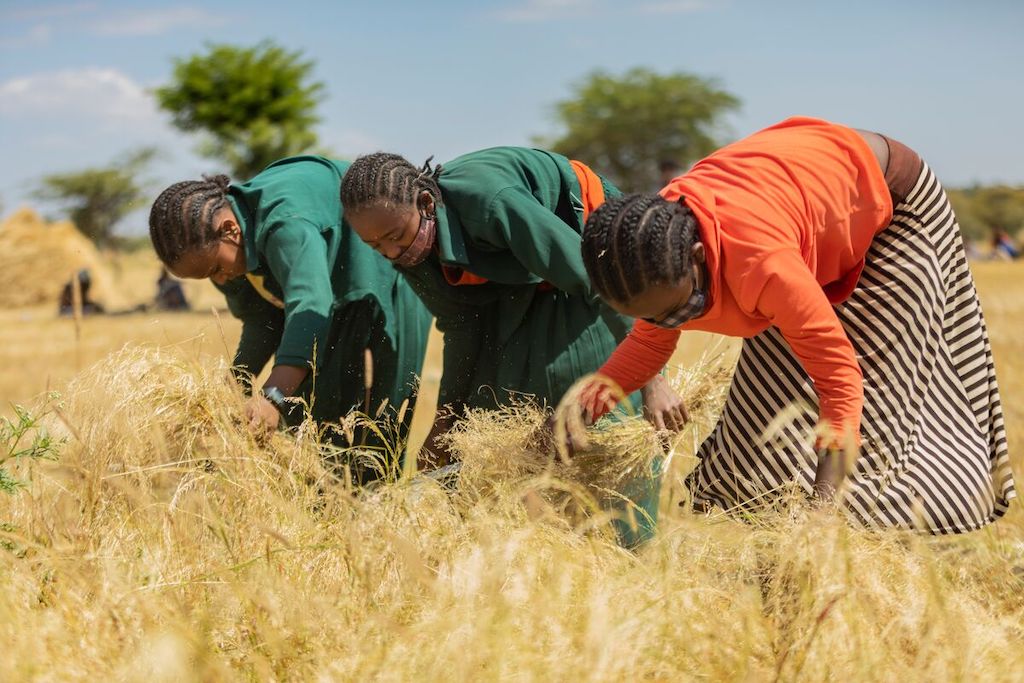 “When friends of my daughter, people I know from the church, suddenly came to my farm, I couldn’t believe my eyes,” he says. “The work that could’ve taken me weeks was finished within hours. They were a godsend. Now I can calmly focus on threshing and storing the crops. They not only saved my family from hunger, they also prevented a possible bankruptcy since I wouldn’t have had anything to pay the land rent if I didn’t have any crop to sell.”

Since their first effort at Behailu’s farm, the church has continued to help other farmers, including those who aren’t Compassion-assisted families. Their efforts have even been recognized by the local government as outstanding and inspiring community service.

Seeing Compassion-sponsored youth be part of this initiative was one of the most important parts for Adamu, the director of the Compassion centre at Areti Mulu Wongel Church. 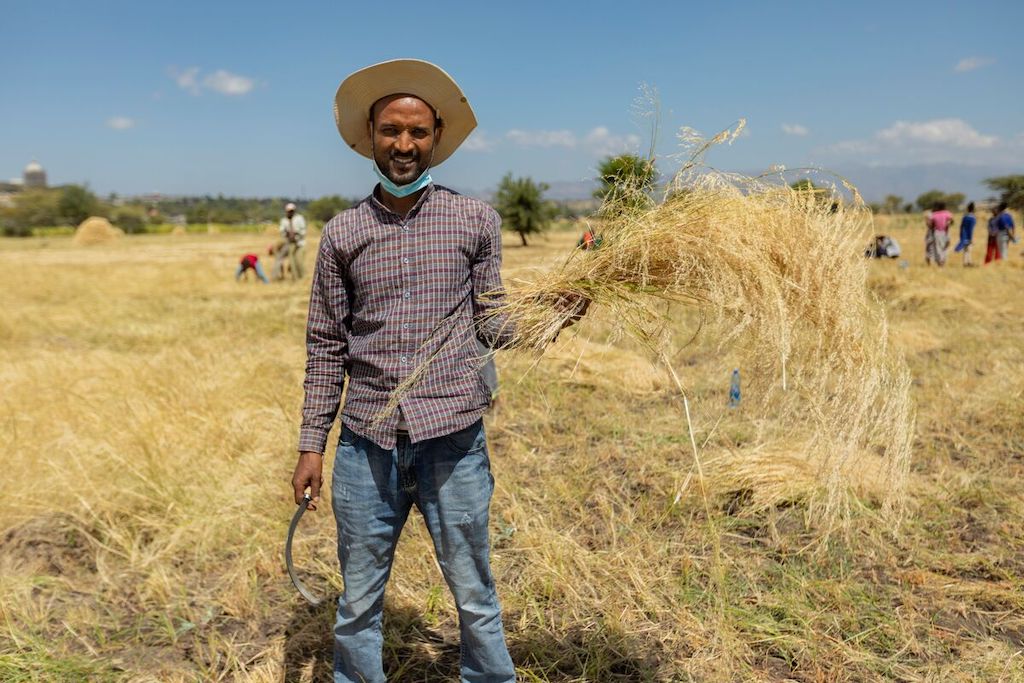 Adamu works in a field to help harvest the crops.

“We were intentional when we included the students in the program,” he says. “We wanted to instill in them the value and joy of giving back. We wanted them to focus on helping others and respond to their social responsibilities. They are the ones who will take over the country, so we want to shape them early on.”

As children and families living in poverty around the world continue to face multiple layers of crisis even as the COVID-19 pandemic continues, Compassion’s local church partners are right there with them. They are walking alongside their neighbours, sharing God’s love in practical and tangible ways. In a world in crisis, the Church remains a leader in responding to the needs of their neighbours—in hope-filled, Christ-centred ways.