Something surprising happened the day I discovered that my daughter would be born with Down Syndrome. When my wife Jill returned from a routine medical visit and said that hints of Down Syndrome had been detected in scans, my eyes lit up with expectation. This surprised me. Receiving news like this is supposed to evoke a profusion of emotions undergirded by a weighty fear of the unknown.

Yet as Jill, a trained nurse, expertly explained to me the possible outcomes of this scan, I began to feel the relief of a longed-for sigh. Until that moment, I only had a cursory understanding of Down Syndrome, so I studiously immersed myself in learning about this condition.

The more I did and the deeper my curiosity grew, so too did my love for this unborn child. I was going to be a father! Although we had opted not to have the baby’s gender revealed before birth, I fervently prayed for a baby girl, often reminding God that, regardless, “not mine, but Your will be done.”

For nearly two years before my daughter was born, I had been struggling with severe bouts of depression that often spiraled into dark nights of my soul. I lost all zest and purpose for life and would invariably describe my life as ‘colourless.’

The isolation of despondency I felt deepened when my relationship with God, which had always anchored me to life’s larger purposes, became numbed. As my intimacy with God faded, overwhelming fear took set in. I doubted if I would ever be the father I had always longed to be. A series of torturous thoughts soon emerged, ultimately prompting me to question my life’s worth.

When my daughter was born into a tumultuous world in January 2020, a new light emerged in my life.

The miracle of birth merits its own category of praise. In stunned silence, I watched as Jill courageously gave birth to a precious baby girl who gave me the privilege of becoming a father. As soon as she was delivered, she let out a shrill cry as our trusted midwife swaddled her before inviting me to hold her. I have given up finding the words to describe the moment I first held my daughter.

Nothing in that moment mattered more than this beautiful soul. In my mother tongue, I introduced myself as Baaba and told her, amarin swa nyaran (I love you so much, my daughter). I called her by her name for the first time, and explained that we named her Selah because, as the Hebrew meaning denotes, she would always remind us to ‘pause and reflect on God’s goodness.’

By some divine conspiracy, Selah opened her beautiful eyes and inspected her teary-eyed Baaba’s face. My heart changed as I began to realize that God’s affections for me were infinitely deeper than mine for my daughter. Selah—her beautiful name came alive.

Those few tender moments occasioned us an opportunity for our first wordless conversation. As the organized chaos of a busy birthing room unfolded in the background, I could see in Selah’s squinty eyes a yearning for care and submission of trust. With her eyes locked into mine, I vowed to always love and protect her. Soon a nurse whisked her off to the NICU, where she was intubated for a few months before having open-heart surgery six months later.

My daughter was born to a father beset by big and small challenges in a world replete with all manner of injustice. From my struggles with depression and persistent numbness in my intimacy with God, I had no real hope of being the father I had always wanted my daughter to have.

By every measure, I felt unfit. Yet somehow, I immediately gained a refreshed perspective about life in general, and about myself. I realized that despite my brokenness, God still entrusted me to the privilege of being my daughter’s father. In His typically gentle and patient ways, He helped me to see that I could be a good father to my daughter by pausing and remembering how good He had always been to me. Selah.

Whenever I reflect on my promise to always love and protect my little girl, I think about how much more capable God is to keep His grander promises to me. This perspective has been my daughter’s gift to me; once again I feel like a child before my Abba, Father. When I hold Selah against my chest, I feel her heartbeats, as if conspiring to sync with mine. These moments remind me that God, who imbued me with His divine DNA, wants me to be like Him—to love and care for Selah the way He loves and cares for me. Moreover, He wants me to always concern myself with making things right that are not; that is what justice is about.

My promise to her

My daughter is a Black girl with Down Syndrome, so I often wonder what sort of life she will have, and how she will overcome the challenges unique to her precious life. One day as I rocked her to sleep, I was confronted by a vivid scenario in which she was not invited to a birthday party because of her appearance. This haunting thought fueled a quiet rage as I held my sleeping child in my arms. 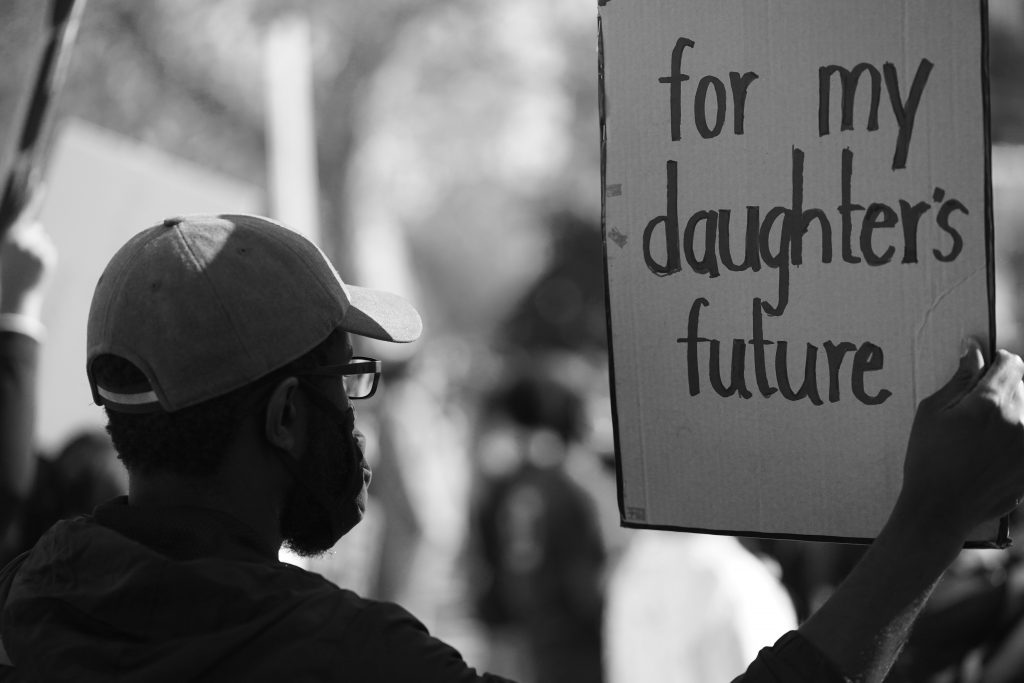 Being a Black father, I am aware of the stereotypes about my kind; that we have our kids “out of wedlock” and that we are always “absent.” While neither of these are anecdotally true for me, I am still a Black father and remain subject to the cascading influences of these stereotypes. When I walk with my daughter, I am constantly aware of “the gaze” from a society surprised that I am involved with my daughter. My heart breaks at the thought that someday society will deny her access either because she has Down Syndrome or because she inherited the colour of my skin.

As frustrating as these thoughts are, they sharpen my conviction to work towards justice. For my daughter’s sake, I want to always be involved in some measure of seeking justice by making right those things that are not. My desire is that Selah’s generation will inherit a world in which everyone more equitably enjoys the full human experience. That is what this father desires for his daughter, because that is what my heavenly Father wants for me.

In June 2020 over 10,000 people gathered in my city to decry racial injustice against Black people. I carried a placard that read “For my daughter’s future”, so someday I will show her images and footage from that day and explain to her the significance of those words. I will tell her that 10,000 people, each bearing God’s image, chanted that her life matters. I will teach her that justice, that endeavour of making things right that are not, begins to happen when we speak the truth against wrongdoing and stand with those among us who are unjustly treated.

I will tell her about how Jesus showed up to defend the marginalized weak against the oppression of the privileged by speaking truth in the face of injustice. That is the beauty of the gospel; it sharpens our convictions towards justice. As I reflect on what it means to be my daughter’s father, I look to my heavenly Father and see a model of fatherhood.

Selah’s gift to me is that she has helped me to remember my God’s affectionate love for me. My promise to her is to always strive to be the father God has modelled for me to be: to love her fully and unconditionally, and to spend my days making this world good for her.

May God bless my daughter’s father.

“Love your Neighbour”: When kids learn what it means to step up for one another

Summer camp ministry in a pandemic: Thinking different and doing something new

How the church can thrive amidst unprecedented change