Jonah and the whale. Daniel and the lion’s den. Esther saving her people. David facing Goliath. These are all beloved Bible stories for children and are guaranteed to come up when you ask a Sunday school class what their favourite stories are. One story you would not expect to be a 13-year-old’s favourite is the story of Job and his suffering. But for Abel, there was deep meaning in Job’s story.

“God is the reason I never gave up hope,” said 13-year-old Abel. “I know, in the Bible, Job didn’t say anything bad to God when all the painful things happened in his life. Rather, he believed in Him. I love this Bible story. I thought about it often during the times that I was sick.” 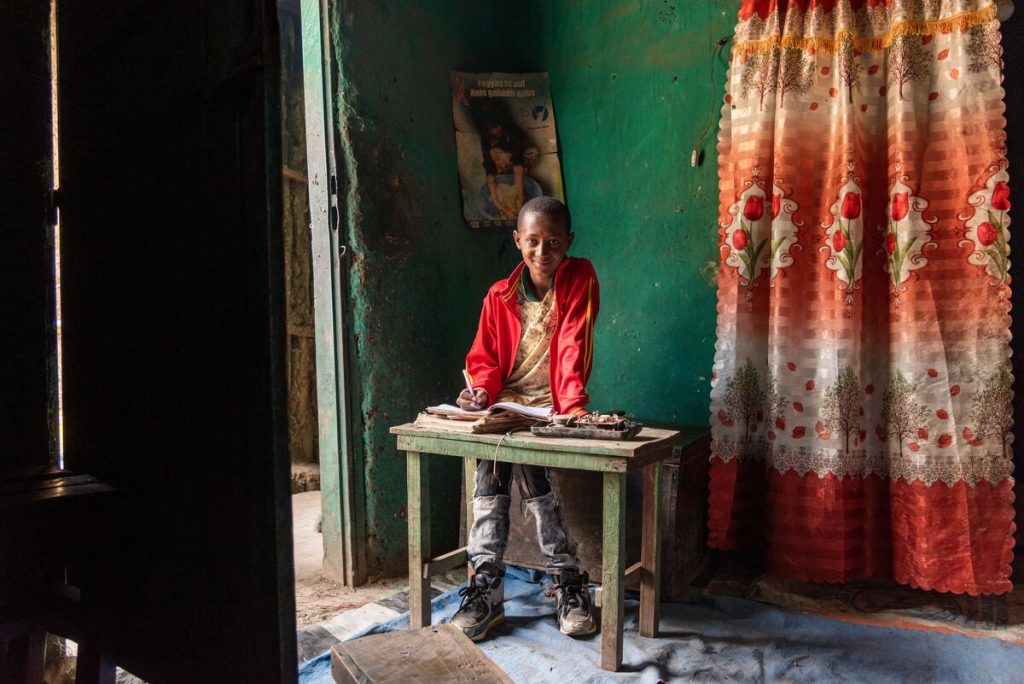 Abel’s illness started as a small swelling on his belly, barely noticeable. However, it soon had turned into agonizing, constant cramps that left him screaming and writhing in pain. His desperate, worried mother pulled him onto her back and rushed him to the nearest clinic. Doctors loaded him into an ambulance and sent him to the biggest referral hospital in Addis Ababa, 165 kilometers away. Astede, Abel’s mother, held his hand for the entire journey, crying and pleading with God to spare the life of her son. Up until this point, her son had been a happy, healthy and strong boy. Now he couldn’t function without strong sedative painkillers. She knew his condition was serious but still couldn’t have imagined the magnitude of Abel’s condition. 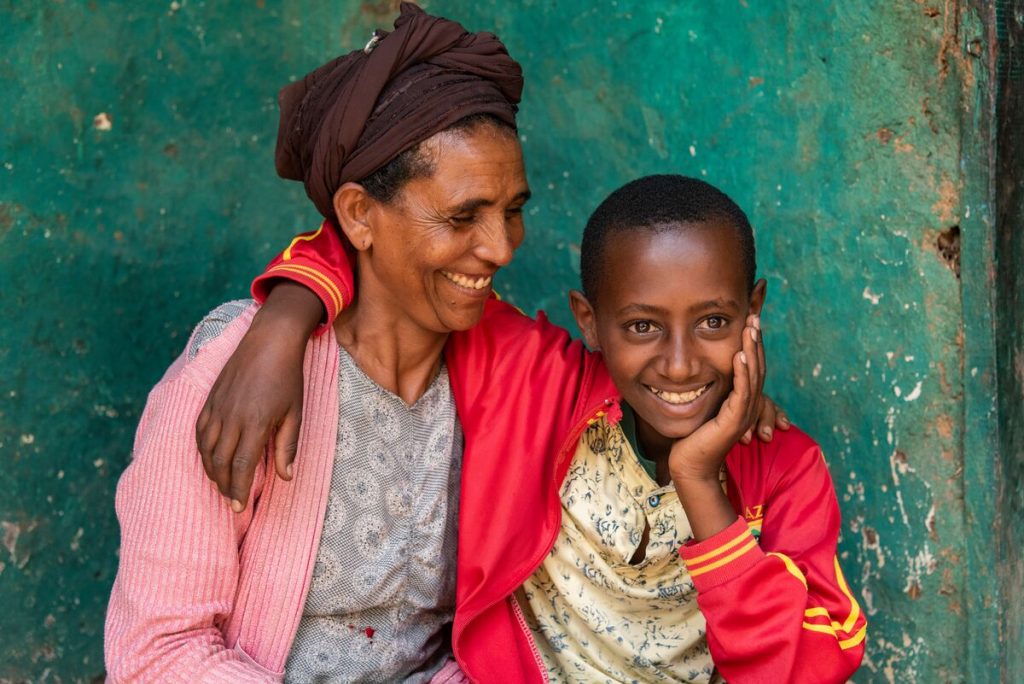 A team of doctors approached Abel’s hospital bed. Sedated with morphine, Abel was barely conscious and had no idea what they were about to tell his mother. With no relatives or friends to lean on, Astede faced the news alone.

“I’m sorry Mrs. Astede, I wish I could give you positive news,” said the senior doctor. “We found a tumor on Abel’s stomach and it is cancerous. We will start his treatment immediately and do all that we can.”

Confused and frightened, Atsede called Mr. Abaya, the director of Abel’s Compassion centre. Since Abel was first registered into the Child Sponsorship Program at three years old, Mr. Abaya had become the first person she called when she was worried about her son. Since she had informed him of Abel’s ill health, he had been closely following the situation. As always, Astede’s heart was uplifted after the prayer Mr. Abaya offered through the phone and the encouraging words telling her to depend on God through the difficult journey. 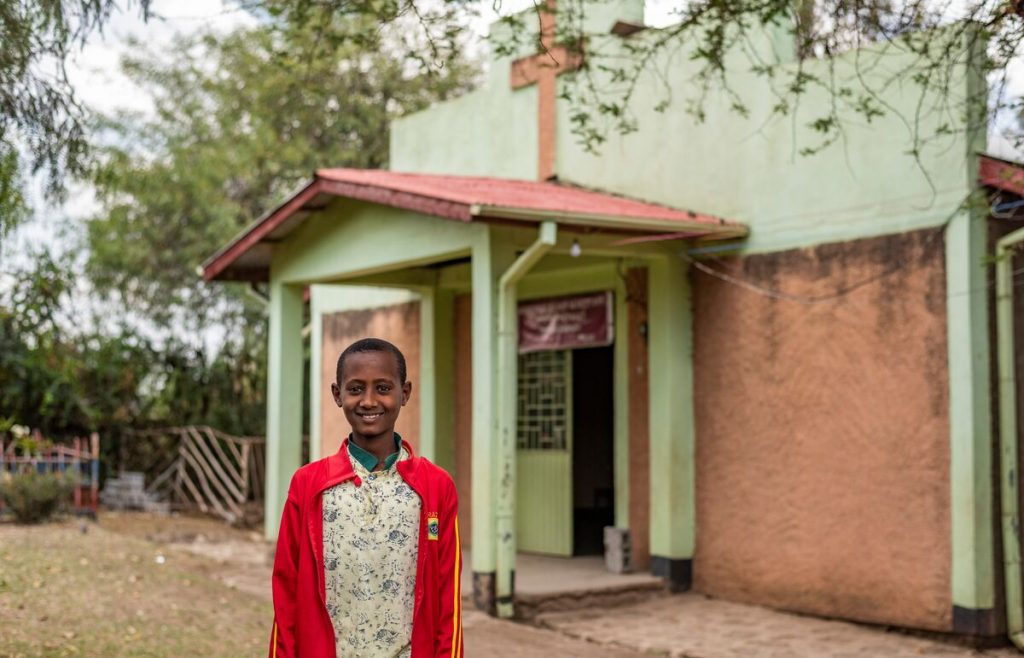 “I felt hopeful when he reassured me that they will be by my side. You see, for a mother whose life had just come to a standstill, there is nothing more reassuring than knowing there are people who will stand by you and who will pray for you,” said Astede.

Besides the emotional support, what eased Astede’s despair was the medical support provided through the program. For a mother whose meagre income depended on selling drinks from home, the mounting medical bills could have easily snatched away her son’s chance of fighting for survival. “One form of support the children receive from the program is access to medical treatment,” explained Mr. Abaya. “We conduct health screening twice a year and cover medical expenses when children encounter health issues.” He added, “Even though complex health issues like Abel’s case are rare in our project, we all rallied behind Abel in prayer and by providing whatever was necessary to help him combat the life-threatening disease.” 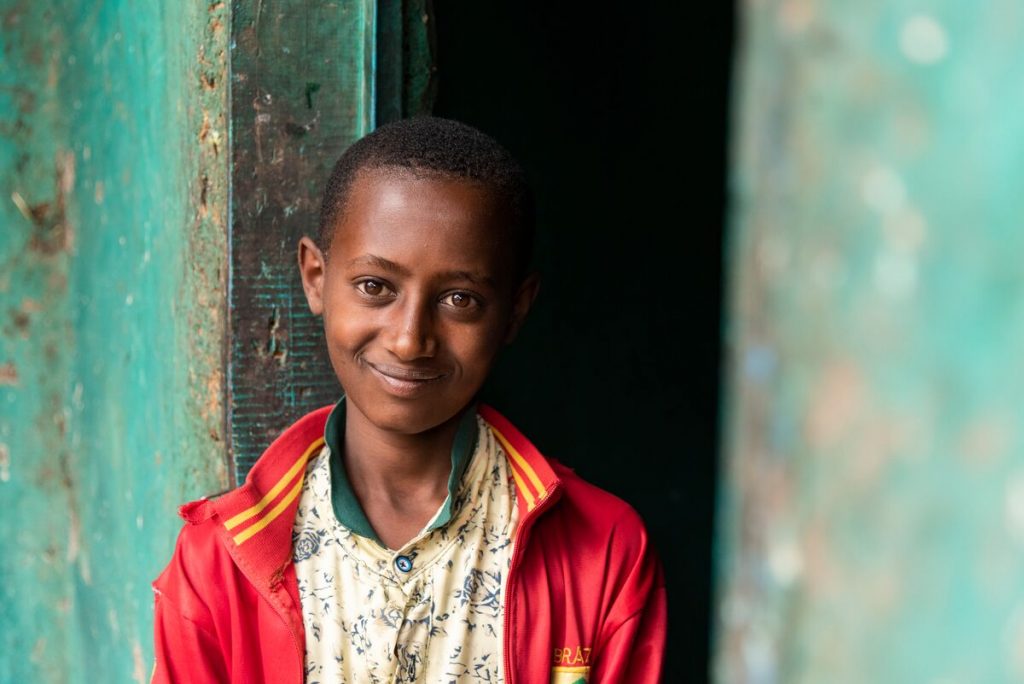 The darkness before dawn

Every new day brought its own misery. Unless sedated, Abel’s pain was unbearable. The side effects of chemotherapy started to show. He slowly lost his hair and his beautiful smile faded every day. Watching on, his mother’s strength wavered. What was most excruciatingly painful for both of them was the unknown. They shared a room with other children enduring similar health problems. Witnessing them pass away sapped both mother and son of hope and stamina. Could he be the next one?

“The first year out of the three years he was sick was the most difficult time of the journey. My neighbours used to call me and assess his situation. The whole neighbourhood was on alert, expecting to hear of his passing any day. Seeing children taken too soon by the disease overwhelmed me every day,” said Astede.

Astede had a lot of questions with no answers. Would the treatment work? Would the cancer go away? Would her prayers, and the prayers of many who heard about Abel, be answered? Would her son’s life return to normal? How long would it be until they were cleared to go back home? 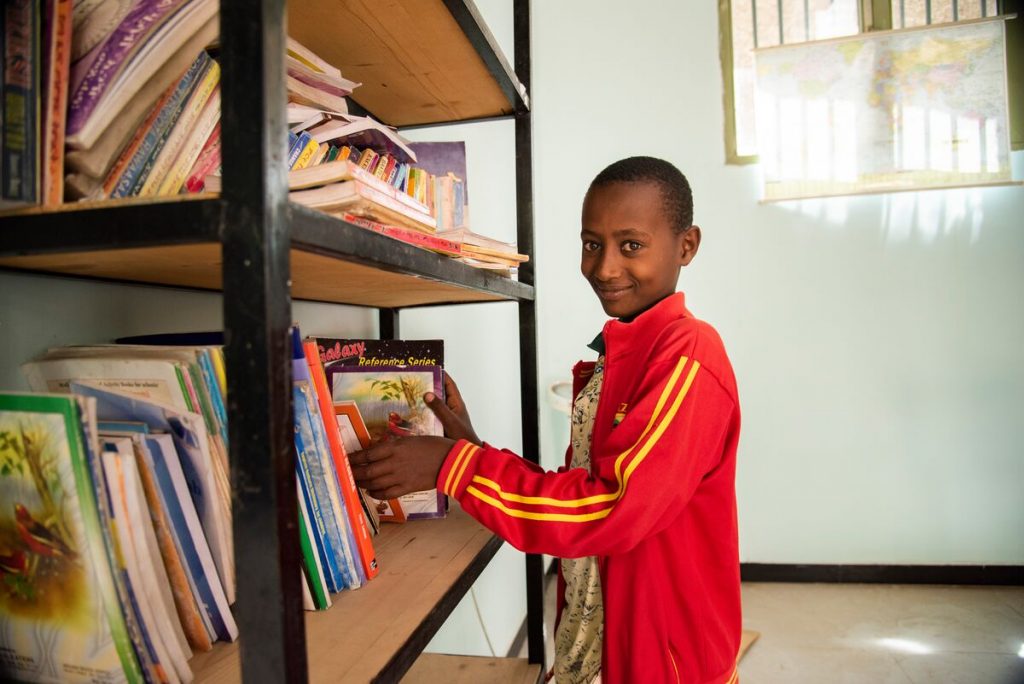 Visits from the Compassion centre staff always replenished Astede’s energy. During the times she wanted to give up and take her son back home, their prayer and encouragement was the only thing that kept her going. Whenever she felt defeated, their prayers strengthened her.

During the times Abel was feeling a little better, he would tell his mother they would soon go home and return to normal life. He was his mother’s advocate when the doctors sent her to buy medications in far parts of the city. His brilliance and resilience always surprised his doctors. In the far end of the hospital wing of the children’s cancer ward, he was the life of the room. 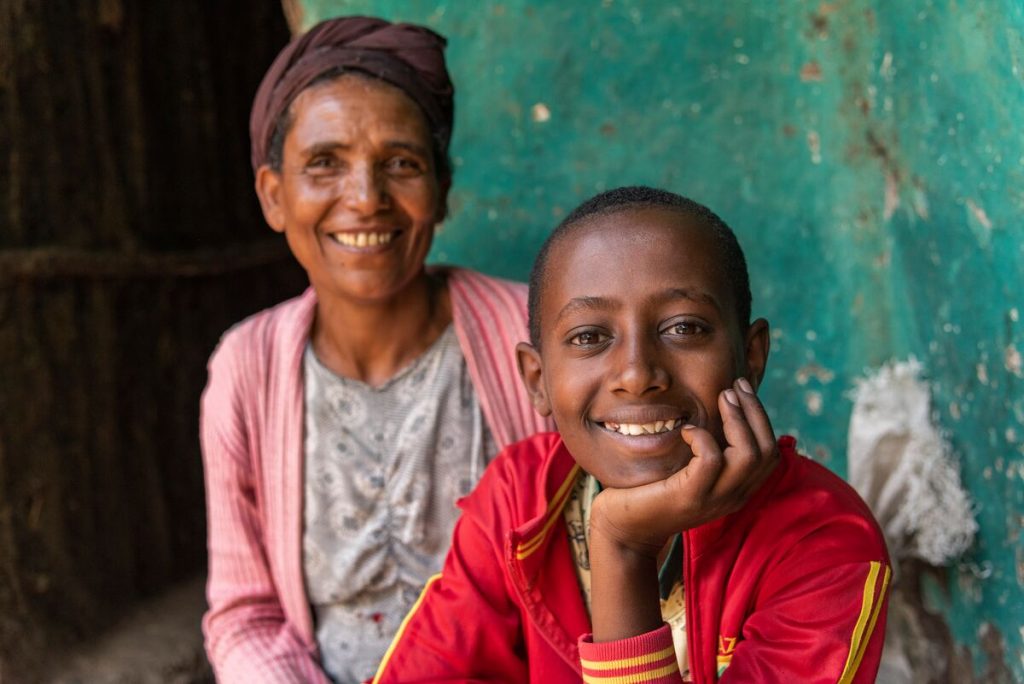 Between rounds of chemotherapy, tests revealed good news: Abel’s tumor was shrinking. Doctors allowed him to return home in between the bouts of treatment so he could rest. It provided some much-needed normalcy for the family. But the best news was to come. When Abel took the last of his nine-course chemotherapy treatment, he was told the time had come for him to return home for good: he had beaten cancer.

“I was happy that I could go back home for good. I wanted to see my friends and start my classes again. I wanted my life back. There were a lot of things I planned to do,” said Abel. 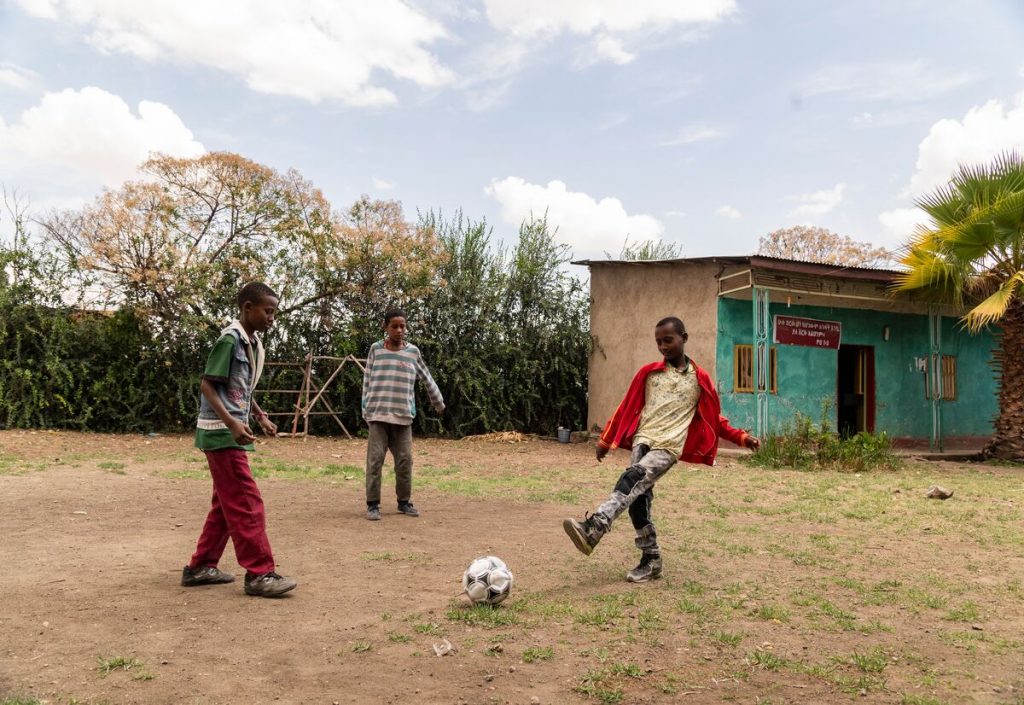 The doctor’s report brought indescribable joy to the mother who had slept on the floor next to her son’s hospital bed for more than a year. She said, “God started answering our prayers. It was time to go home and start life again. Seeing the smile on my son’s face wiped away all the doubt and fear that was still inside me. I guess I needed time to really believe that it was all behind us. I didn’t take my son’s body back home as most expected. I took home my happy and healthy boy with a beautiful smile and a new beginning.” 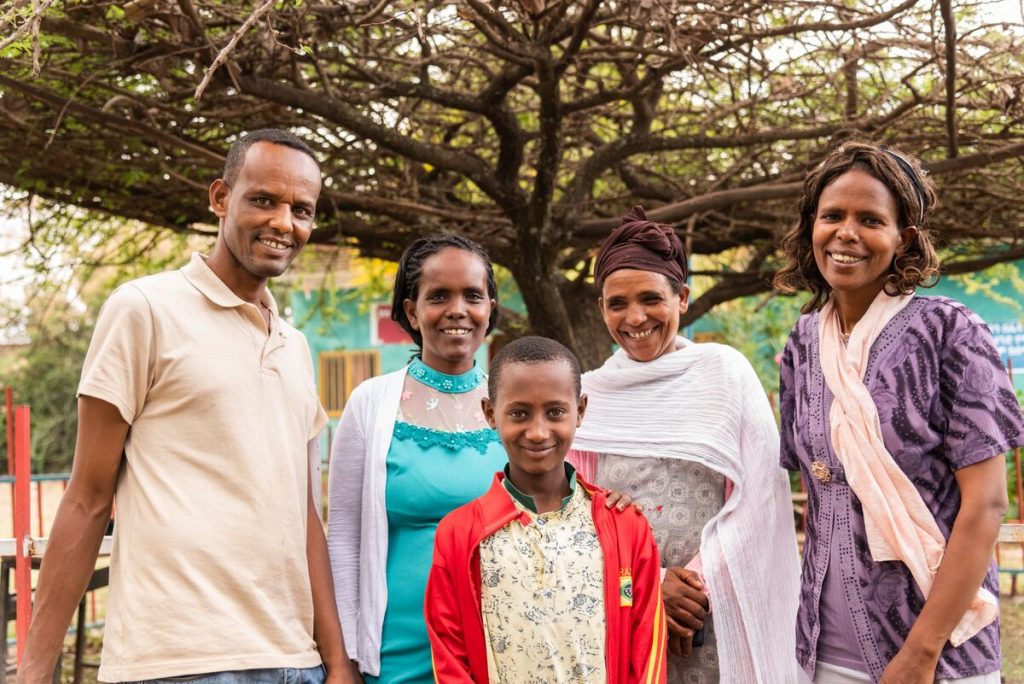 Of the five children who shared a room with him in the children’s cancer ward, Abel was the only survivor. In the two years since his treatment, he returned to school and even received an award from his Compassion centre for his school performance. Seeing how active and vibrant he is now, no one could tell that he is a cancer survivor. The scheduled hospital appointments and the health checkups continue to confirm that he has overcome the disease that threatened to take his life.

Abel said, “The Sunday school lessons about God strengthened my faith. I know the prayers and concerns of many people played a huge role in my recovery. Just like Job, I tried not to complain but to simply trust in God. God healed me, just like he healed Job.”

For the whole church community and for all the children and caregivers at the Compassion centre, Abel’s story is one that strengthens their faith in God. 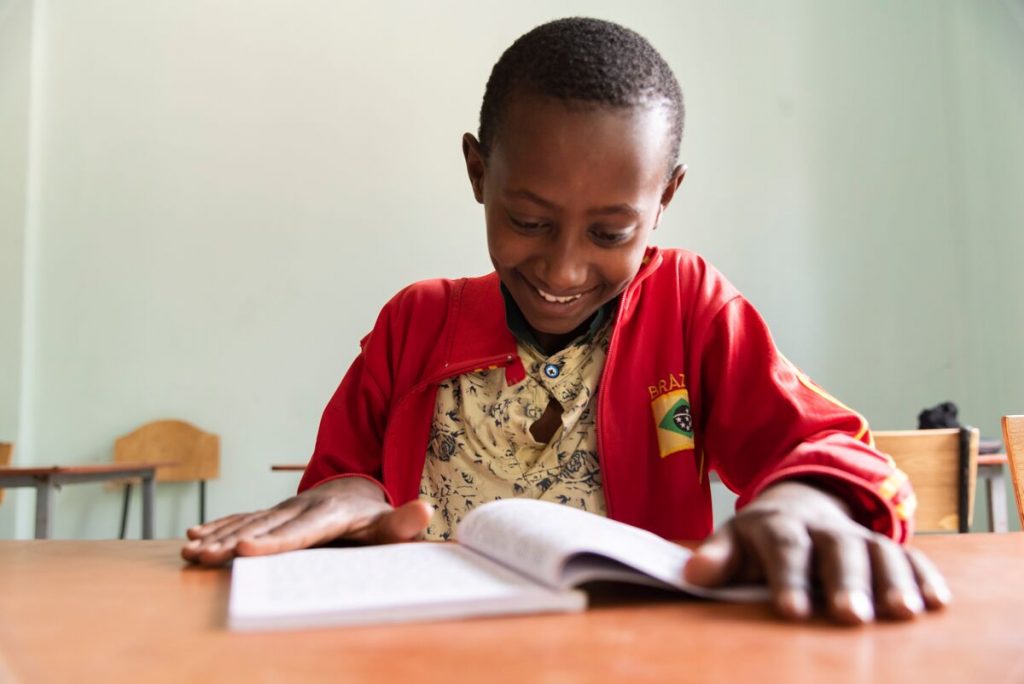 Astede said, “I always thought God brought Compassion and the church into our lives to help Abel get an education, go further than most children in the community, and achieve his dream of becoming an electrical engineer. I now realize that God had even a greater plan than that. He brought Compassion to our lives because He knew we could never survive the storm without the provision and support of Compassion. He used Compassion to give my son a second chance in life.”

You can help children like Abel with the support they need when facing challenging diagnoses. Provide hope for a child and their family by giving to Compassion’s health interventions!