Content warning: This article includes mention of violence that some readers may find disturbing. We recommend that you read with discretion.

As 16-year-old Sarah approached the compound where her family lives, she was intercepted by her frantic mother, Zuri.

In that moment, Sarah knew she had made a potentially life-threatening error. Just earlier that morning, her mother had sent her to her aunt’s house to hide. Zuri had spotted an elderly woman at their compound who is known for performing the female genital mutilation ritual. The ritual remains prevalent in the region of Tanzania where they live, despite its criminalization. Zuri knew that Sarah wasn’t safe.

After spending the morning at her aunt’s, Sarah thought the danger was over. But when she returned home, she was met by a frantic Zuri, who sent her away again.

While panic threatened to surface, Sarah remained calm. She knew where to go—the one place she knew she would be safe. “I went to the church where I was registered [as a Compassion sponsored child],” she says.

Female genital mutilation (FGM) is a traditional practice that has been documented in 30 countries, mainly in Africa, as well as in the Middle East and Asia. It is an extremely harmful practice that has no medical justification and is recognized internationally as a human rights violation. Women and girls who undergo FGM experience both immediate health risks and long-term complications to their physical, mental and sexual health. 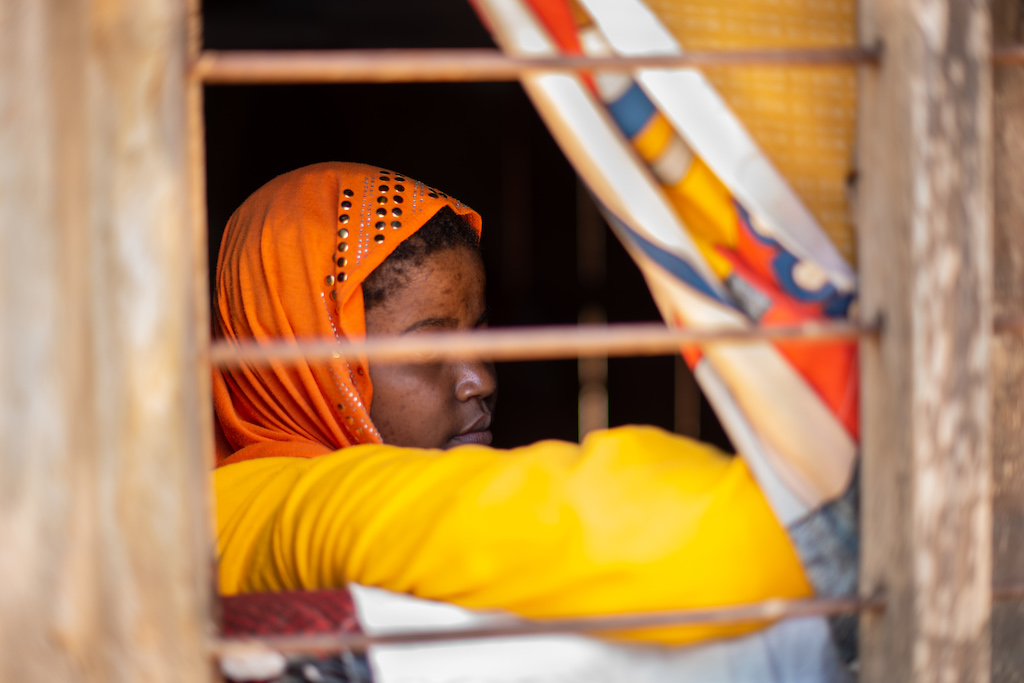 Sarah is a 16-year-old Compassion sponsored child who narrowly escaped undergoing the brutal practice of FGM.

It is estimated that at least 200 million women and girls alive today have undergone some form of FGM. Every year, an additional 3 million girls are at risk of adding to that number. The vast majority of girls are cut as children or teenagers.

Zuri is one of those 200 million women. “I was born at a different time compared to my daughter. When my mother did it to me and my sisters, we couldn’t fight it. But now, having lived through the complications of having it done to me, I did not want it for my daughter. It is a very cruel thing,” Zuri says.

Since the criminalization of FGM in Tanzania in 1998, it has been performed in secret by cutters like the woman Zuri spotted in their compound. For many parents and grandparents, it remains a rite of passage rooted in social convention and discriminatory ideas about girls and women.

In Sarah’s case, it was her grandmother who invited the cutter to their home. Thankfully, her mother stood opposed to the practice. “When I found out my mother’s plan,” Zuri says, “I ran to [Sarah] and told her to leave immediately.”

The local church: A network of protection and champion for justice

“We try to make sure that our kids trust us. We encourage them to come to us,” says the director of Sarah’s Compassion centre. Like all Compassion centres, Sarah’s centre is based at a local church, where local staff know and care for every sponsored child individually.

“We also have a child protection committee which is made of members of the community,” the centre director says. “If a child faces any form of abuse, and they can’t get to the centre, we encourage them to go them.”

It’s easy to see why Sarah went to the church when she needed protection. “When Sarah came to the centre to tell us what happened, we first found a place where she would be safe,” the centre director says.

As they secured Sarah’s safety, another urgent matter was pressing: What about Maria, Sarah’s cousin? 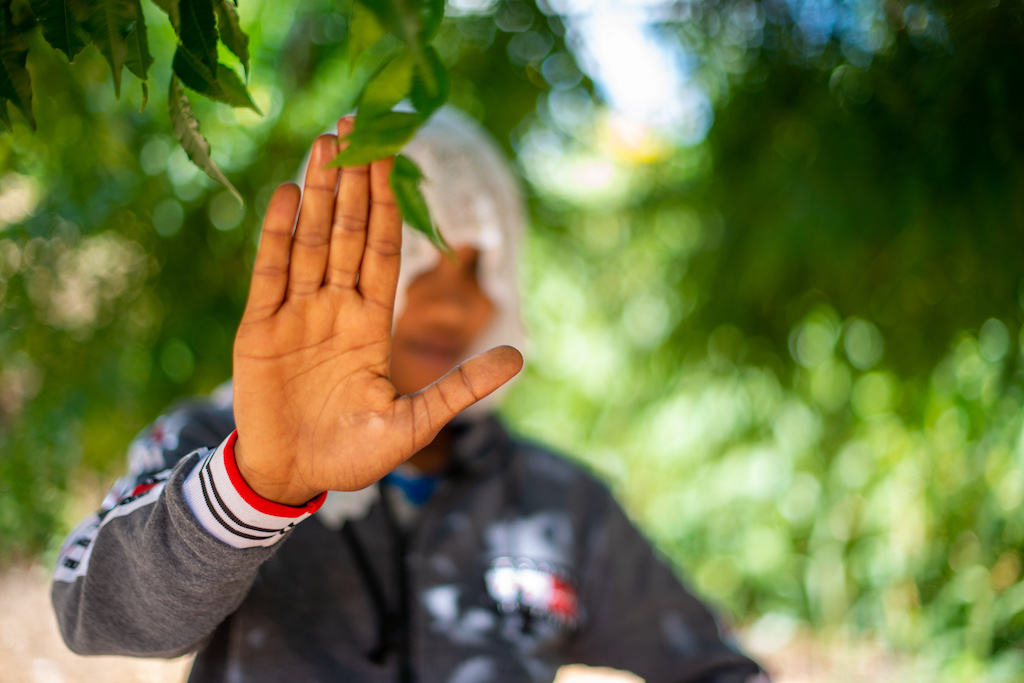 “Maria is also among the kids registered at our centre,” says the centre director. “We tried to move quickly so that we could rescue her, but sadly we were too late.”

The fact that they were unable to prevent Maria from enduring FGM did not stop the centre from pursuing justice. Staff brought the matter to the police. Maria’s mother and the cutter were both arrested.

The cutter’s trial went to court, but the elderly woman passed away before the case was finalized. As for Maria’s mother, Maria struggled greatly with what to do—a tragic reality for far too many girls whose parents are the ones to put them through the evils of FGM. In the end, Maria decided she did not want her mother sent to jail. 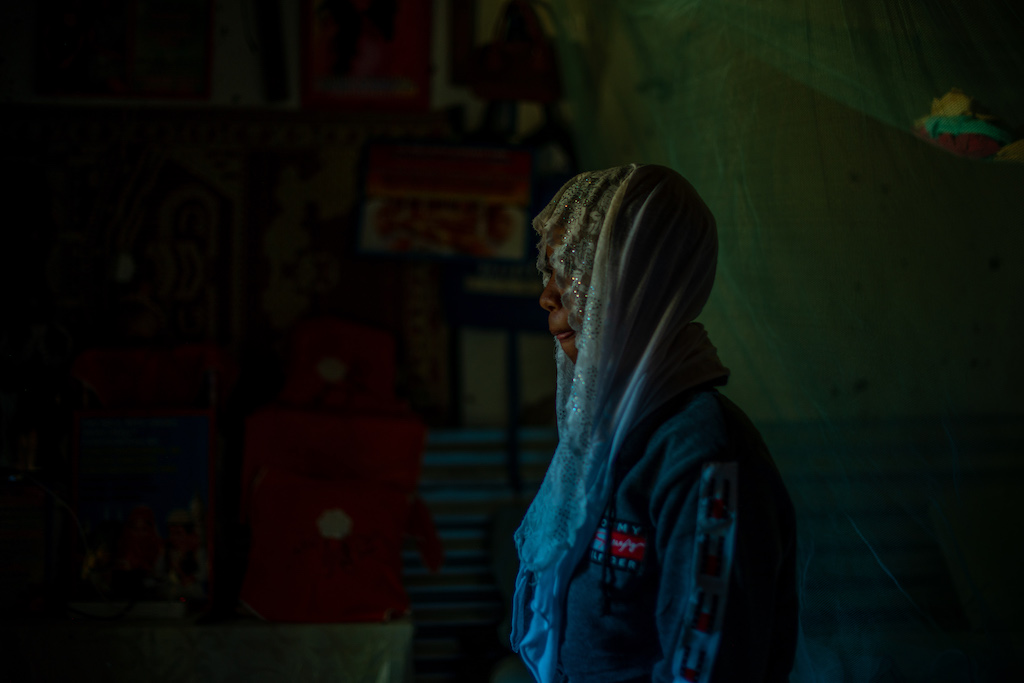 Maria faced the impossible scenario that far too many girls are forced to endure: her mother was the one who subjected her to FGM.

“My mother is the only parent I have. I did not want to see her go to jail,” Maria says. “I hated what she did, but she is still my mother.”

Sarah and Maria’s experiences highlight the importance of the centre’s ongoing proactive efforts against FGM. The centre runs regular seminars on the issue to educate parents and girls about the physical and psychological impacts of FGM, working hard to bust myths and break down the deep-rooted ideas and norms surrounding the practice.

Zuri attends every one of these seminars and invites others, too, even when she faces resistance. “As someone who has experienced and lived through birth complications as a result of FGM, I attended every seminar about the practice that the Compassion centre organized. I tried to take my mother with me for the sake of my sister and my niece, but she never came,” says Zuri.

In neighbouring Kenya, the local church is also working hard to combat FGM with education, partnering with local leaders and long-standing anti-FGM activists. 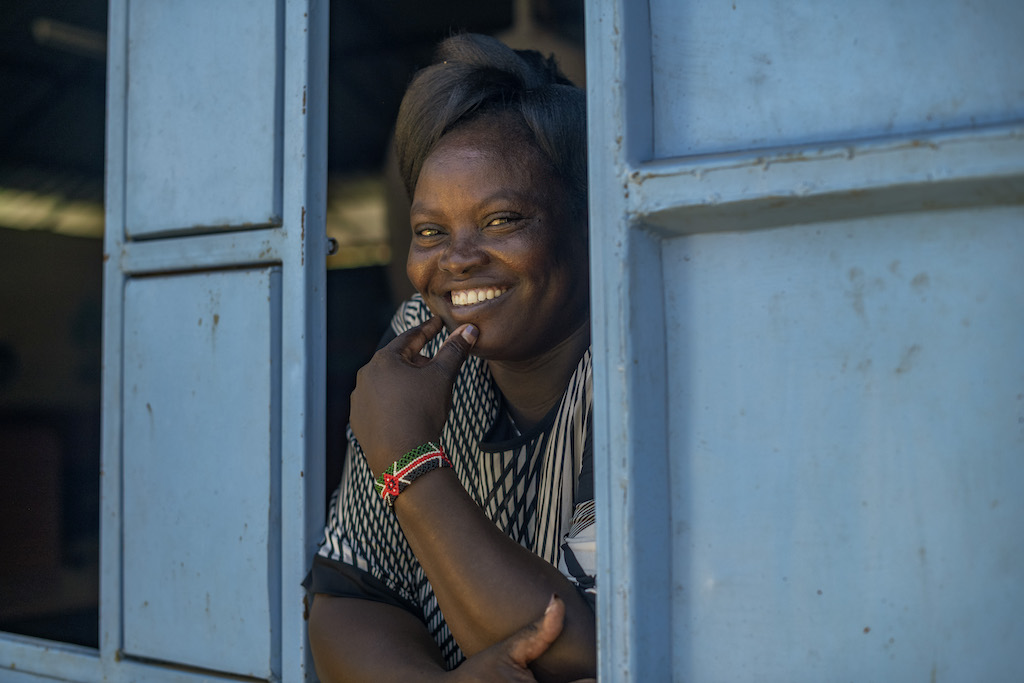 Florence is a local teacher and activist who has been standing against FGM for decades.

Florence is a teacher who runs a primary school that is also a rescue centre for girls escaping FGM and the related issue of child marriage. She is a well-known champion in the community for the rights of children, and especially girls. That’s why, in 2016, when a Compassion centre was established at a local church, Florence was unanimously elected to chair the committee of local leaders overseeing the centre.

Makal, the grandmother of 7-year-old Damaris, a young girl registered at the centre, says, “Florence’s work to make the community safe for girls has not gone unnoticed. That is why we chose her to represent us.”

Florence’s priorities for the centre are in-line with the advocacy work she has been doing for years. She ensures children like Damaris receive ongoing education about their rights and that caregivers are provided training about the dangers of FGM. 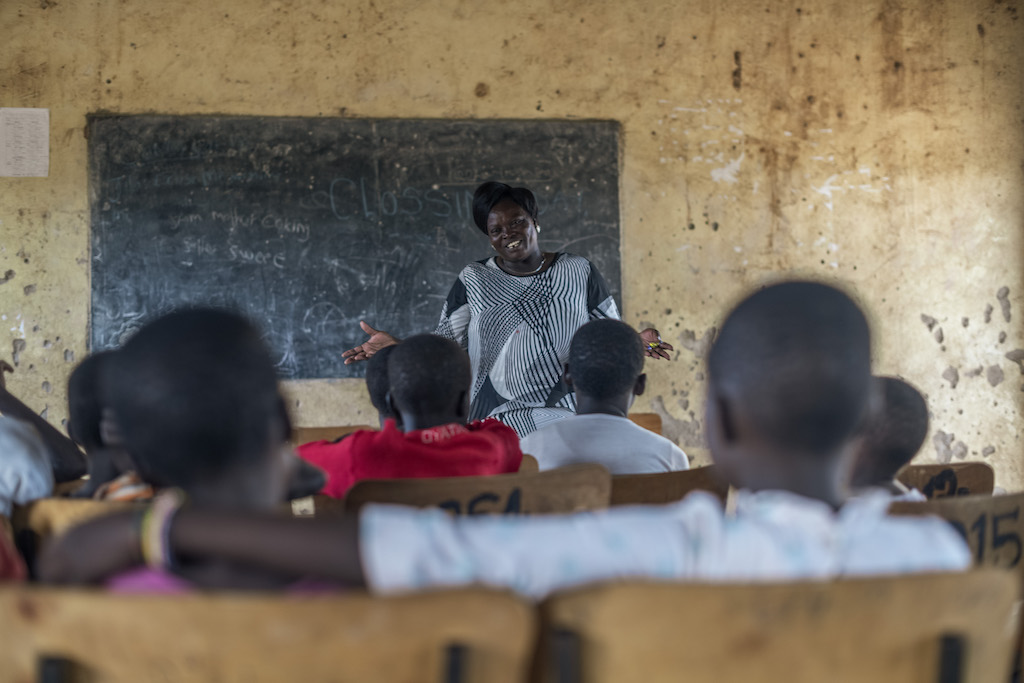 Florence speaks to a classroom of children. Photo taken prior to the COVID-19 pandemic.

“We understand that the key to dealing with this problem is continuous education,” Florence says. “Therefore, we engage other non-profit organizations, as well as government and non-government institutions, to educate our children, caregivers and the community at large. We envision a future in which there will be a significant drop in the number of children that suffer FGM and early marriage.”

The work of Florence and the rest of the Compassion centre staff and leaders is having real impacts: school enrollment for girls is multiplying, in some cases doubling and tripling previous enrollment numbers.

But Florence knows the risk remains and the fight continues. Even one girl being subjected to FGM or child marriage is one too many. “We take a zero-tolerance stance on child abuse, and we have made it clear to all our children’s caregivers that action will be taken against anyone who undermines the rights of a child.” 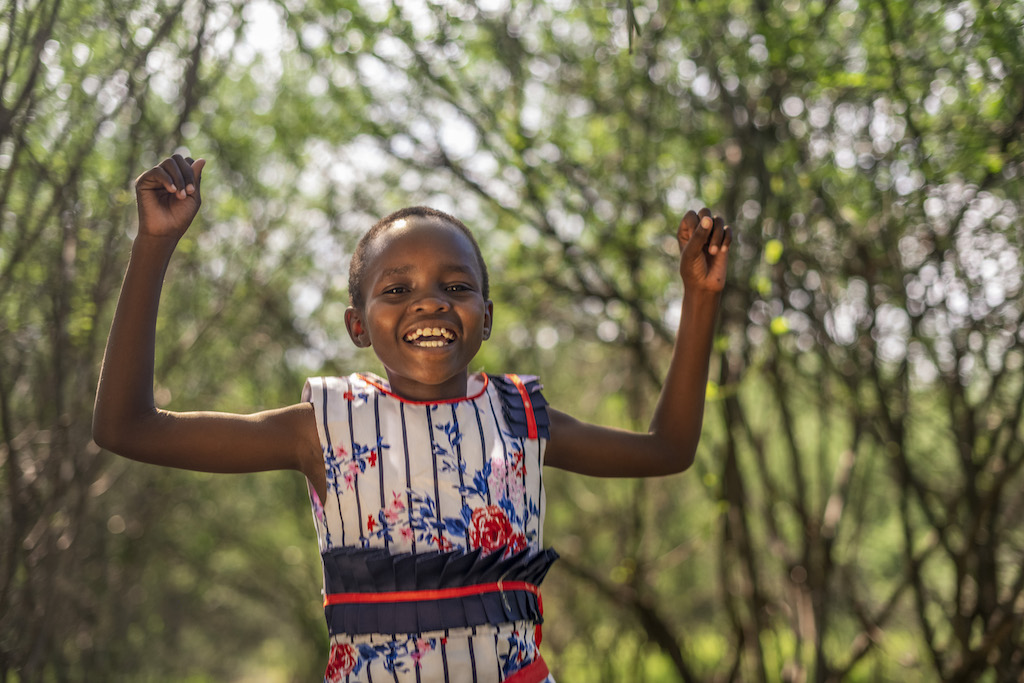 Damaris is a 7-year-old sponsored child in Kenya.

It’s a message being heard loud and clear in Sarah and Maria’s community in Tanzania, too.

“We have had only this one situation—Maria’s—where the parent has gone through with [the FGM ritual],” the centre director says. “The fact that we involved the police in this matter [sent a clear message] to any other parent that may have had plans.”

Eradication by 2030: A big goal for the sake of our daughters

One of the sub-targets of the United Nations’ Sustainable Development Goal 5: Gender Equality, is to eradicate FGM by 2030. It’s a big goal, but for girls like Sarah, Maria and Damaris, it is long overdue.

“Maria and I always told our parents that we did not want to be cut,” says Sarah. “When my mother sent me away, that was the day I knew how much she loved me. I just hope more parents could be like her.” 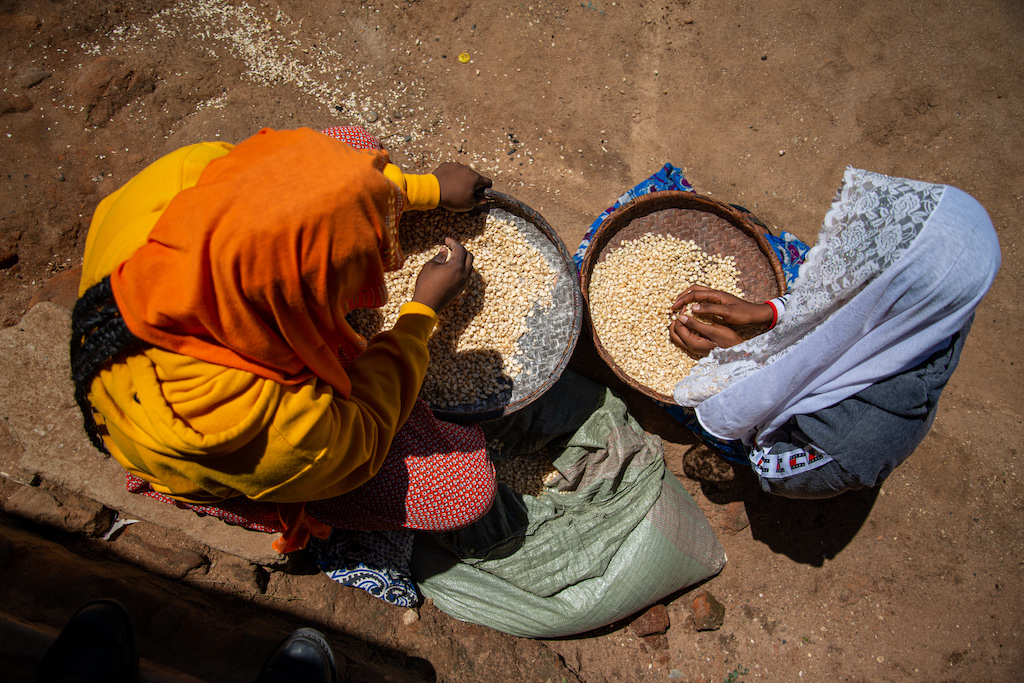 Today, Maria and Sarah are continuing their education and continue to find love, protection and support at their Compassion centre.

That is the goal of Compassion centres in every region where FGM remains prevalent, as they continue to empower girls, educate caregivers and the community, and act as a safe haven for children at risk.

With brave women like Florence and Zuri leading the charge, there’s no reason to think that we can’t eradicate FGM by 2030.

Help protect the rights of girls living in poverty.

You can search by country to sponsor a girl in a country where FGM remains prevalent today, including Tanzania, Kenya, Burkina Faso, Ethiopia and Indonesia.

*Names in this article have been changed to protect identities.

Feature photo caption: Sarah, 16, escaped the brutality of FGM thanks to her brave mother and protection from her Compassion centre.