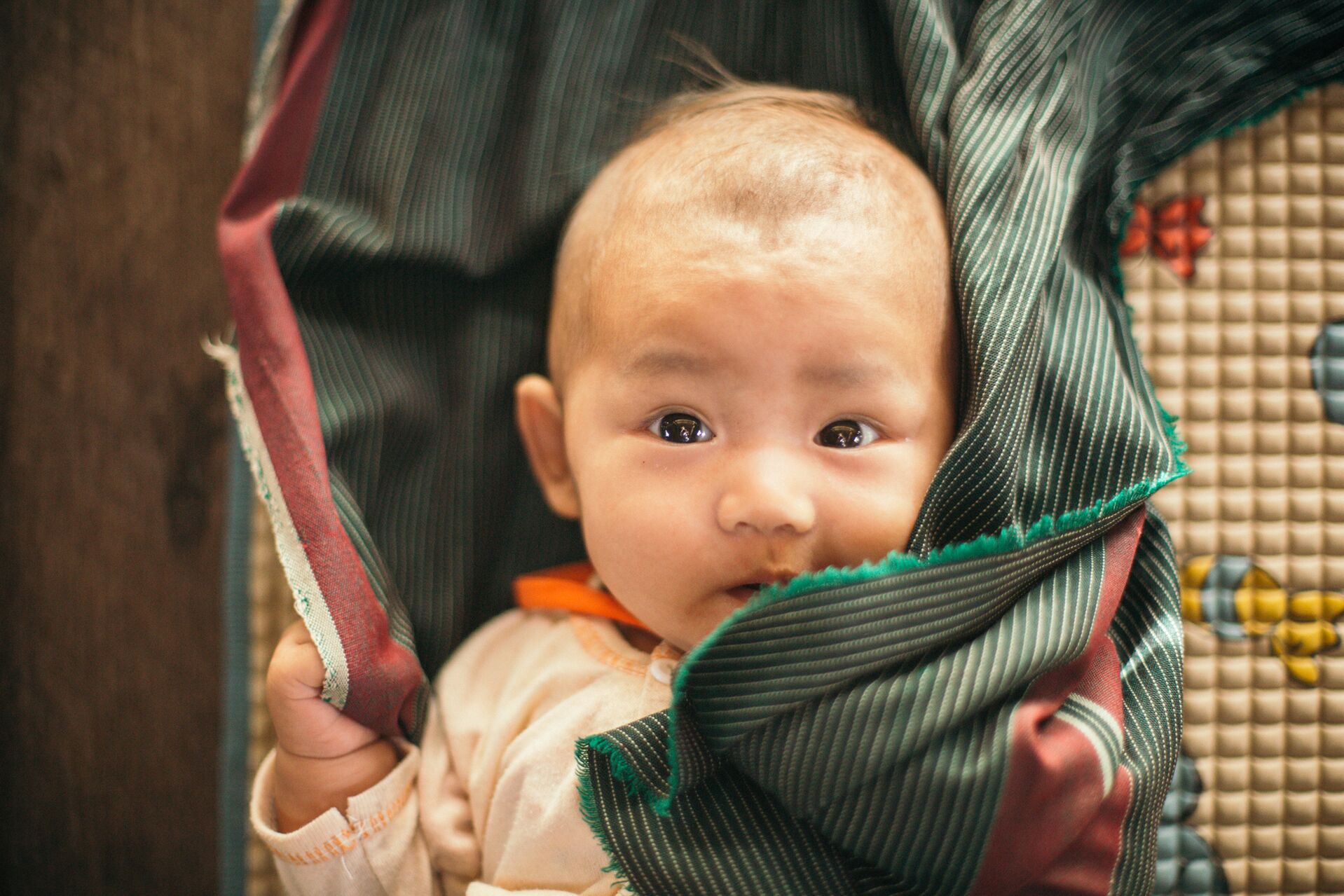 At last, the rain has stopped, and the air is filled with fog. A silent mist envelops the morning sky—the sign of winter approaching. The end of the year is near. But, as the days pass, there is still no sign of baby Sathinee’s parents returning. Just like the winter fog, discouragement hangs over Muchunu’s home.

“They went back to my daughter-in-law’s village to harvest the crops. It’s been two months and I haven’t heard from them,” says Muchunu, baby Sathinee’s grandmother. 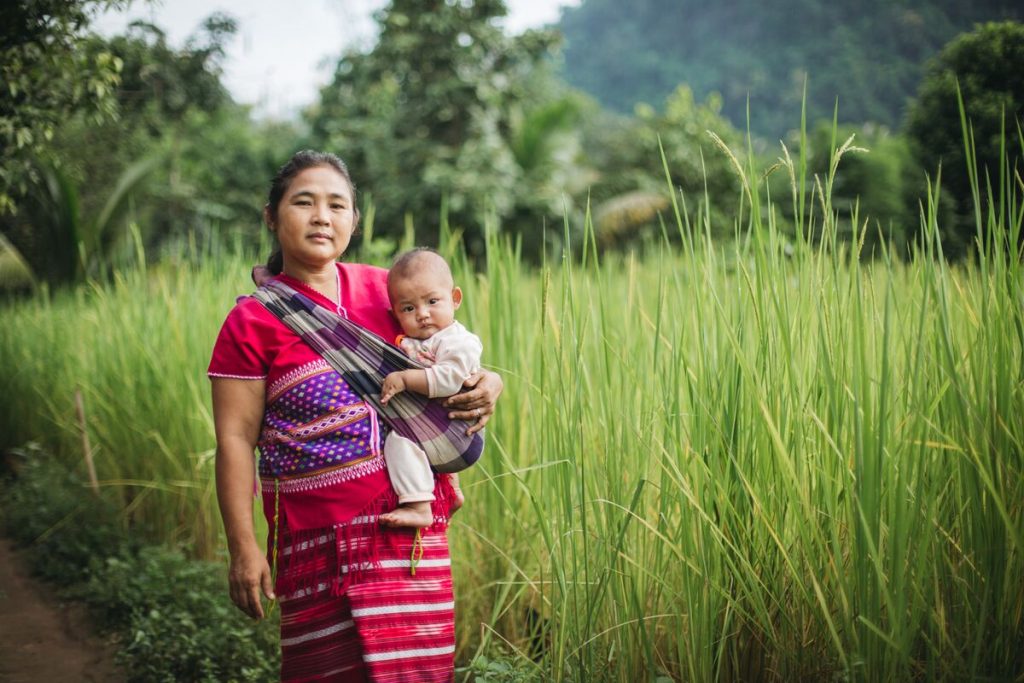 “I know that they are safely back there. I just hope that they can return home soon to reunite with their daughter.”

Baby Sathinee was born during Thailand’s COVID-19 lockdown. Later, when the country lifted restrictions in mid-August, her parents took the opportunity to visit her mother’s family in Myanmar and expected to return after two weeks.

They left three-month-old Sathinee with her grandmother, sparing her the long journey. The tough decision was made easier because their baby girl was already on formula after reacting to breast milk. They never expected their 14-day trip to turn into months. 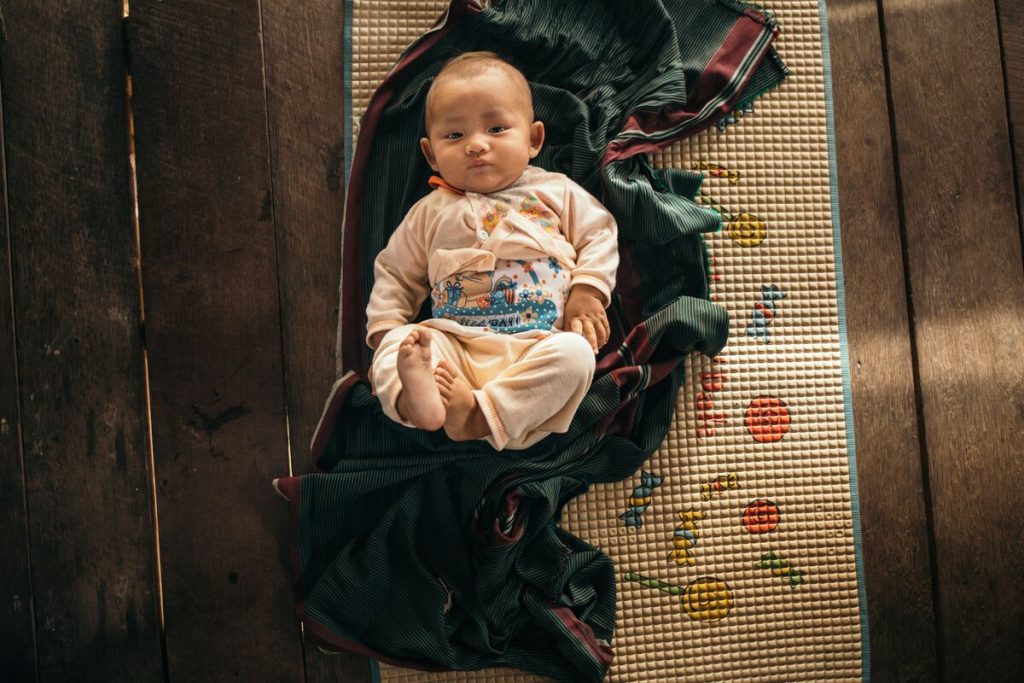 In Myanmar, the number of COVID-19 cases was doubling each week. To slow the spread, Myanmar closed the country’s borders. People were no longer allowed to cross into Thailand, separating baby Sathinee from her parents and causing significant challenges for families like theirs who live on the border.

“I usually can cross the border for farm work back in the village close by,” says Muchunu. “But now that they have closed the border, most of us here can’t find work. I can’t work in the crops and can’t even go to find some forest food there.” 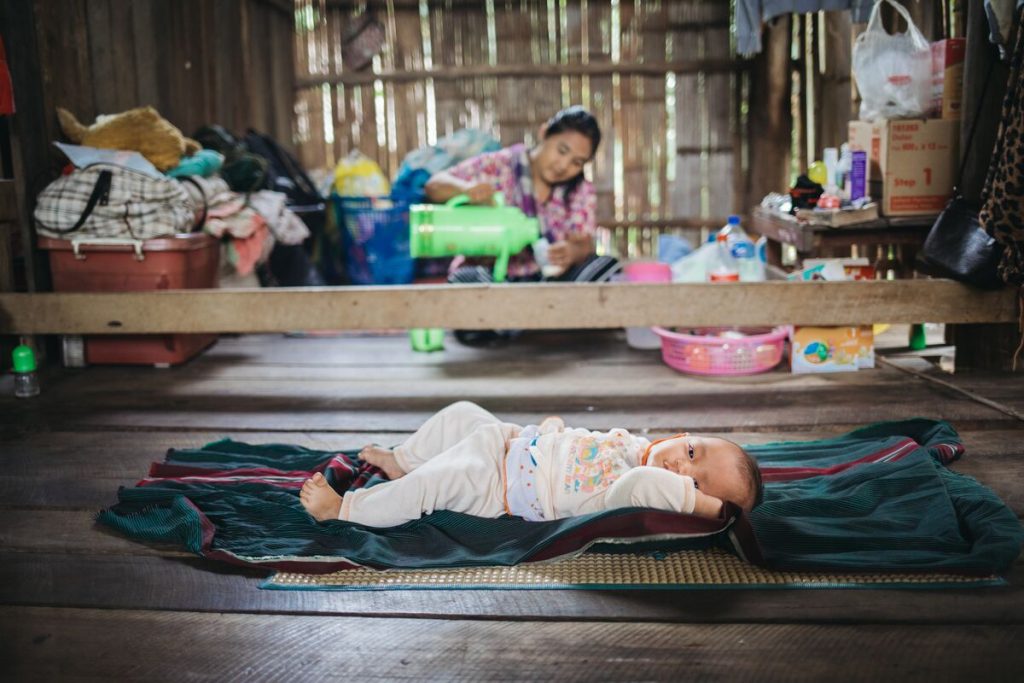 Today, both sides of the borders are closed. Sathinee’s parents are in a remote forest area and are unable to communicate with Muchunu. As the full-time caregiver for the sweet little girl, Muchunu can’t go to find work or forage food for her family of six.

“Sathinee is still too young as a baby and vulnerable to take her to anywhere,” says Muchunu. “It’s too risky for her health and safety to carry her along if I go collect forest food or work.”

Though she worries about her granddaughter, her mind is put at ease knowing she already has the support of her local Compassion centre, Nong Bua Child Development Centre.

“I’m so thankful for the Survival program. Otherwise, I don’t know how and what I would feed her.”

Baby Sathinee’s young mom was registered in Compassion’s Survival program—an initiative that helps support moms and babies in poverty through their first years of life—during her pregnancy, so staff continue to look after the sweet baby even in her mother’s absence. 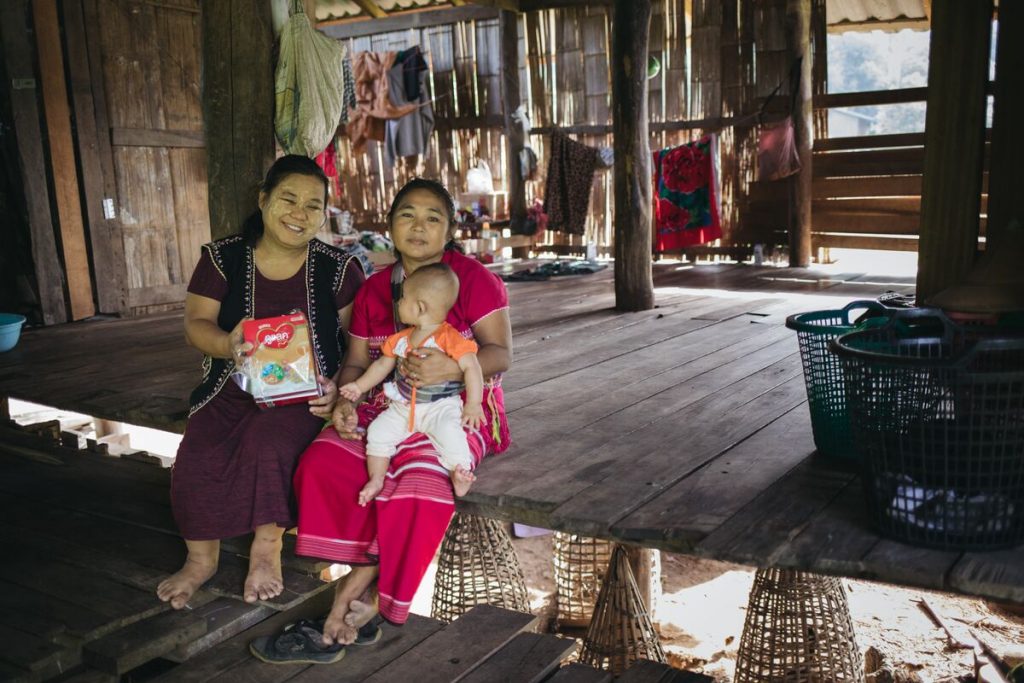 “Since Sathinee is allergic to proteins in breast milk, the centre has been giving her six boxes of formula per month, and it was always enough,” says Muchunu.

The formula is nearly CAD $7 for a 320g box—the equivalent to Muchunu’s entire day’s wage as a labourer. So, staff quickly stepped in to make sure their family had enough formula.

“We have to check on her more often just to make sure her grandmother has enough formula for Sathinee and the supplies that she needs to take care of her,” says Jumi, a Survival staff member. “We just want to see every baby healthy and well cared for.” 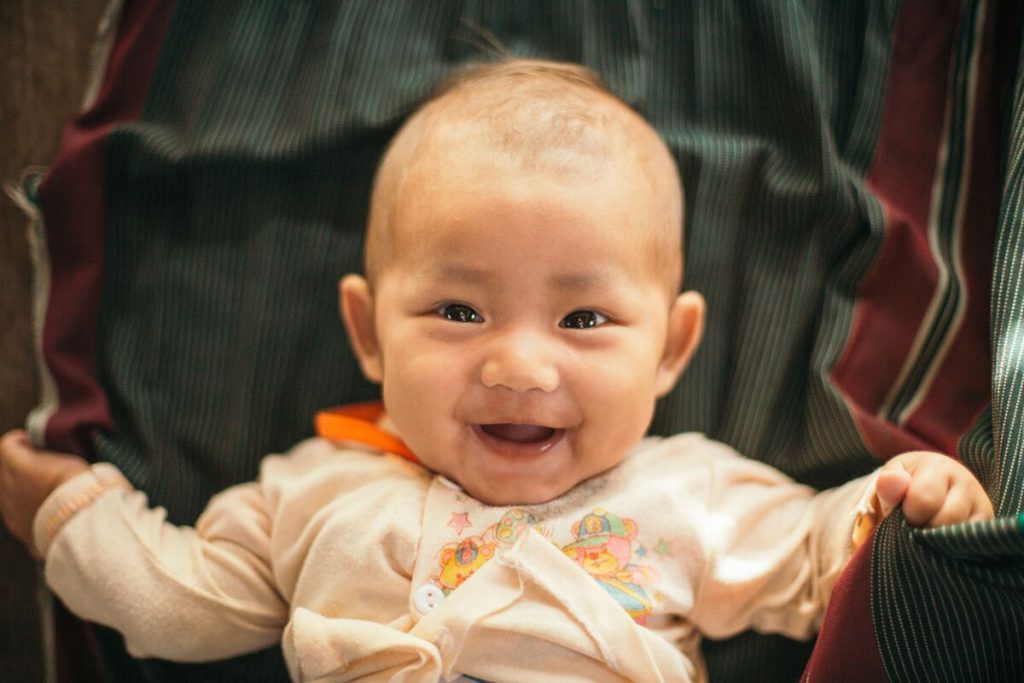 “I’m so glad and feel so blessed that Sathinee’s mother is registered to the Survival program,” says Muchunu. “When we need help with the baby, they always give us a hand.”

As well as providing support with formula and food supplies for the rest of the family, the Survival staff also ensure Sathinee receives her developmental check-ups and vaccinations at the hospital.

“I hope that the COVID-19 situation will be better soon because I want Sathinee to see her parents as she is growing. I have no trouble in putting my hope and trust in God to go through every situation, and just pray to keep myself strengthened in faith,” says Muchunu. “I’m so thankful for the Survival program. Otherwise, I don’t know how and what I would feed her.” 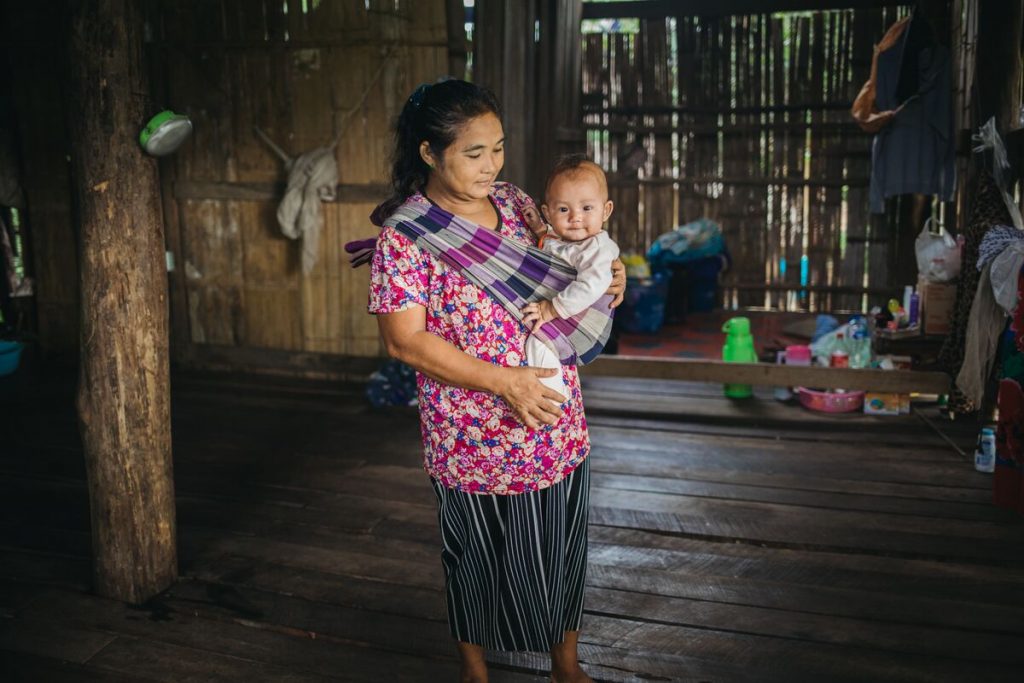 Despite the winter fog and not seeing her granddaughter’s parents for months, Muchunu isn’t despairing. She has the support of Compassion’s church partner. She has cared for seven children of her own and now she shares the same love and care with Sathinee, her first grandchild, with the Compassion centre staff by her side.

This Christmas season, you can provide a new mom or caregiver living in poverty with everything they need to help their newborn baby survive and thrive through their first year of life, reminding them that they are not alone.

Give a Baby Bundle