According to UN stats, there are approximately up to 150 million children worldwide living on the streets today. Some have had no choice. They were orphaned, abandoned or disowned by their parents. Some have faced war or natural disasters and have no home to return to. Others have opted to brave the dangers of street life rather than face one more day in an abusive home. 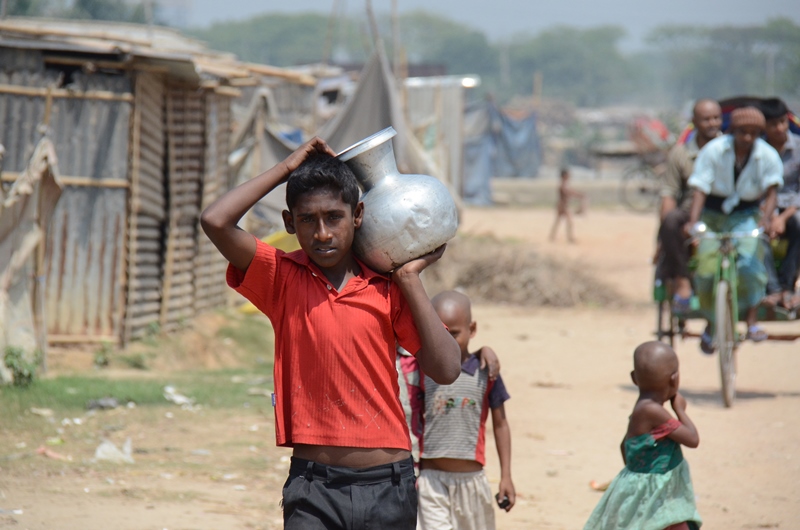 Then there are the children who have a home but work on the streets as their only means of income. They beg, steal or perform small jobs like shoe-shining or selling items in the market to feed themselves and their family. These children often drop out of school and are much more likely to join gangs, steal and become addicted to drugs and alcohol.

No matter how street life is defined, one thing remains the same: all are at risk of disease, violence, becoming addicted to alcohol and drugs and being trafficked or sold into prostitution. Lack of education leaves few opportunities to find a way out. Their life expectancy is extremely low.

The future looks bleak—but it doesn’t have to stay that way. 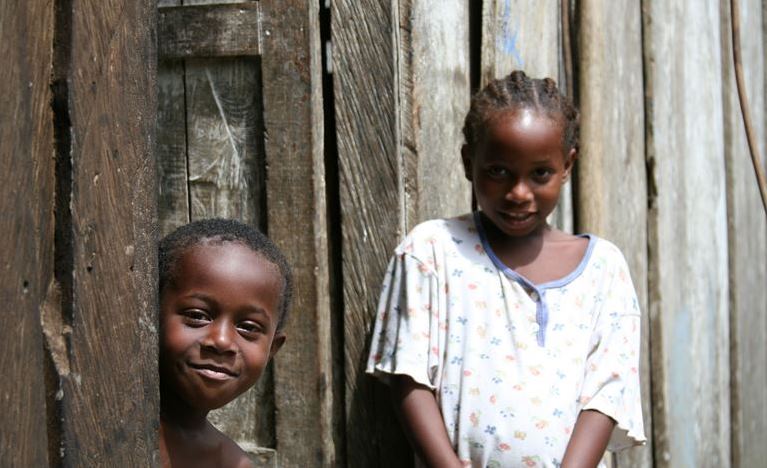 Etagegn was only 14 years old when she moved to her nation’s capital looking for work. This isn’t uncommon—youth in Ethiopia often move to larger cities, lured by the promise of well-paying jobs and better lives for their families. Etagegn was no different. She secured a job as a housemaid and dreamed of sending her siblings to school.

After working for a year and a half, Etagegn married a man she thought was in love with her. But it didn’t take long for that love to turn into control. “I thought I was lucky to find love and a husband that will support me, but I was wrong,” she says. “Once he married me, he became a person who doesn’t really care about me. He forced me to choose between him and my Christianity.”

Confused and frightened, Etagegn obeyed her husband and abandoned her faith. Shortly after, he left her. She was 7 months pregnant. 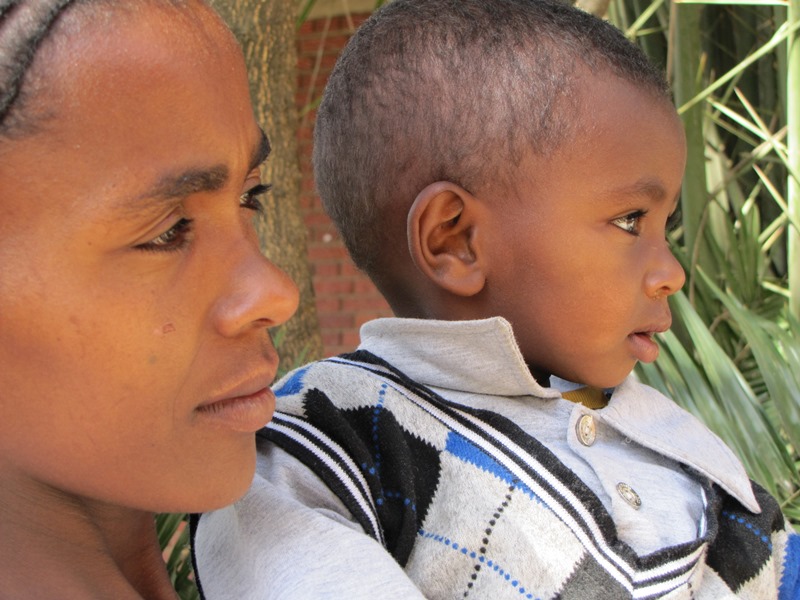 “I hated life at that moment,” Etagegn remembers. With no other options, the scared, pregnant teenager began living on the streets, begging for meals and trying not to think of how she would deliver her baby—or if they would even survive the birth. She prayed daily for God to provide a way out.

One night a woman approached her on the streets and asked what she was doing there so close to her due date. Etagegn broke down and shared her story. Brimming with compassion, the older woman took her home and shared her meagre resources with Etagegn, inviting her to stay until after her baby was born. A few short weeks later, Etagegn gave birth to a healthy baby boy, Yohannes.

Three days after Etagegn came home from the hospital a woman stopped by the house and told the young mother about the Child Survival Program. Etagegn was in desperate need; she had no food and was so malnourished she couldn’t even nurse her infant son. Through the program, she was given food supplies for her and Yohannes, clothing, medical care, life skills training and education. 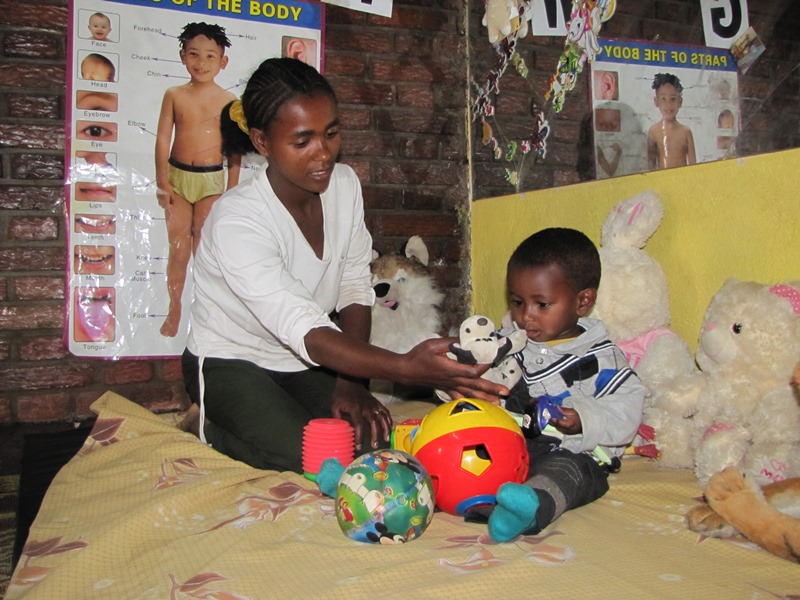 “It’s amazing what has changed in our life,” Etagegn says. “My son is growing up. All his needs are being met. The training I get on parenting, hygiene and work ethics are invaluable. The staff have shown me love and accepted me just as I am.”

Best of all, she rediscovered her faith.

“God chose Yohannes, my son, from the womb and gave me the means to properly raise him. He rescued me and my son from the grips of death so that I can serve Him again. For me, the Child Survival Program is where my life began to change.” 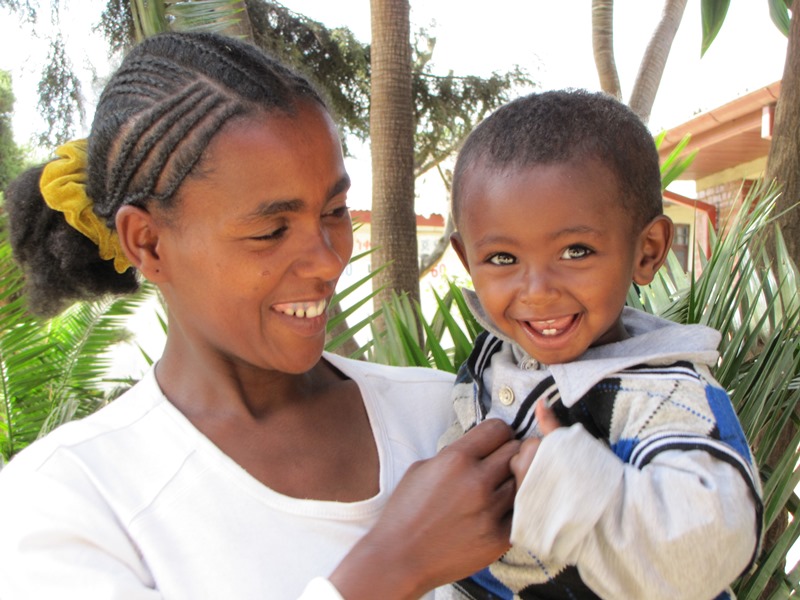 Hope in the slums

The sun rises over Dhaka, Bangladesh, glinting off apartment buildings and slowly waking the city. In the shadow of these high rises sprawl the slums—near enough to be neighbours, but in a different world. Derelict structures are hastily built with bamboo, plastic, hard paper and tin. Families barely fit in their tiny shelters, but with 15 million people crammed into 815 square kilometres, personal space is a luxury most can’t afford.

This is where Al-Amin spends his days with his step-mother and three siblings. Their father abandoned them shortly after his youngest sibling was born. It’s not safe place to live. Al-Amin and his siblings are constantly at risk of being enlisted by slum leaders for illegal activities. 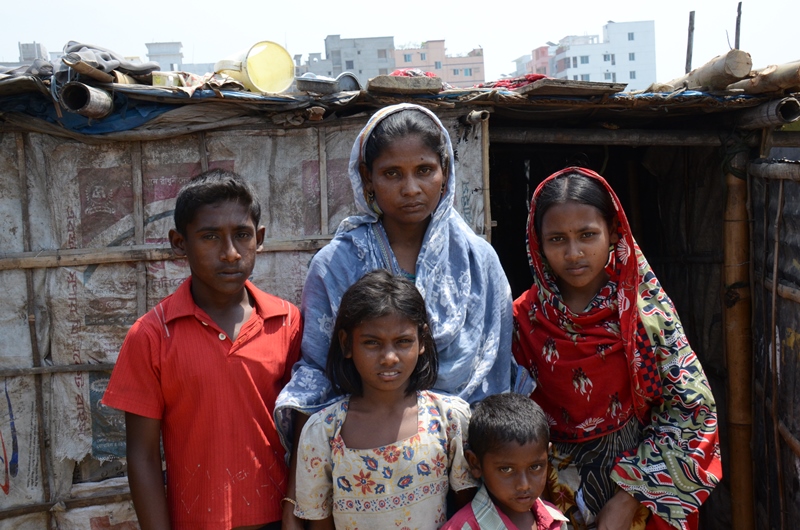 Most of Al-Amin’s peers don’t go to school. Many dropped out to work small jobs and provide for their families. Lack of clean water and sanitation is a major problem; disease and malnutrition are common. 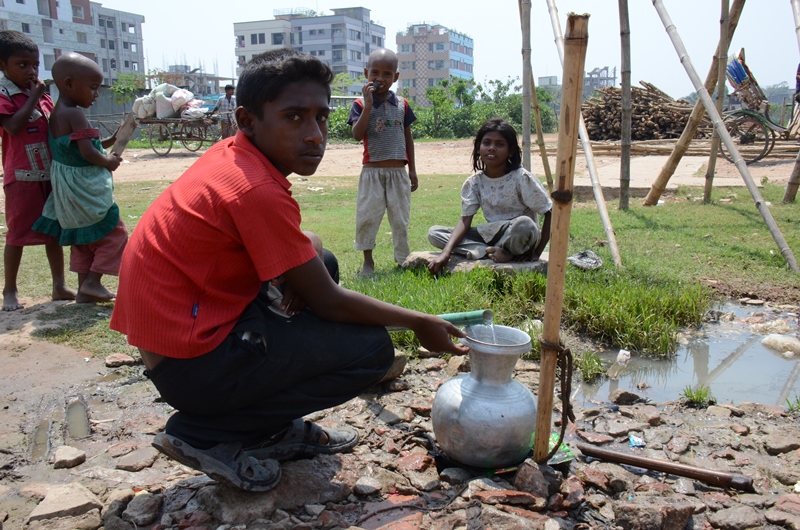 It wasn’t until Al-Amin and his older sister, Seuli, were registered through Compassion that things began to change for the family. Seuli dropped out shortly after, unable to manage the program, her schooling and earning an income on the side, but Al-Amin is determined to stay in the program.

“On the weekends, I make tea for the customers in a small tea-stall,” he says. “In exchange the shop owner gives me a little money.” It’s exhausting to stay in school and work at the same time, but Al-Amin finds tremendous support in the encouragement of the staff at the local child development centre. 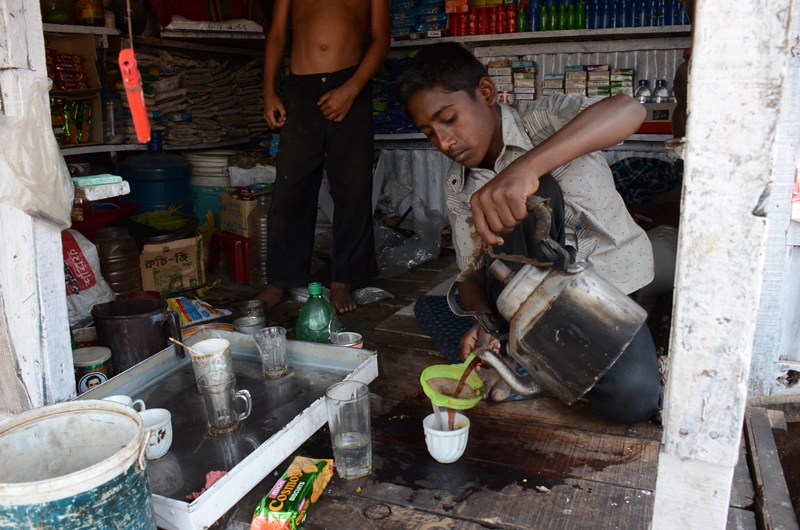 “We get anxious when we don’t see Al-Amin for two consecutive days,” says Johny, the project director of the centre. “We are also concerned about his future. We don’t want him to depart like his elder sister.”

It isn’t easy, but with his child development centre behind him, Al-Amin is fighting for a different future—one where he and his family can live in safety.

Saved from the streets

Mawulolo chose to live on the streets.

In Ghana, illegal property seizure—also known as “land grabbing”—is common. When Mawulolo’s father died, he left his wife, Maria, and four sons with a piece of land they could call their own. Shortly afterward, his relatives tried to steal it back.

Life became rough for Maria and the boys. Without a proper income, she couldn’t build on or farm the land she was fighting for, much less feed her four children. Soon their home was reduced to a kiosk in the marketplace, and her two older sons left to fend for themselves. Why return home when your home is already on the street? 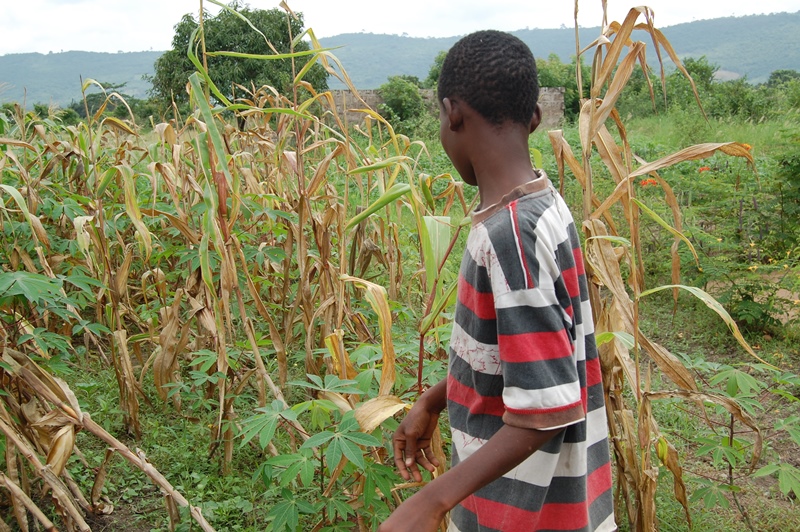 It didn’t take long for Mawulolo to imitate his brothers. He began missing school and went instead with his peers to collects and sell scraps. He stopped attending his Compassion centre and only came back to his family late at night. Maria ran to the Compassion centre for help, but Mawulolo, angry at his mother and determined to make his own way, ran away.

But Mawulolo’s Compassion centre would not give up that easily. They filed a report with the police and posted his photo in public areas. Announcements were made on the local radio station. Relentless, Maria and the Compassion centre continued to search for Mawulolo.

Mawulolo lived off what he made selling scraps. Shortly after, a man promised Mawulolo and his peers a better wage working in his used clothing business. But the boys’ new employer was not the kind-hearted man he appeared to be. He locked them up during the day and violated them at night. As soon as he was able, Mawulolo and his friends escaped. 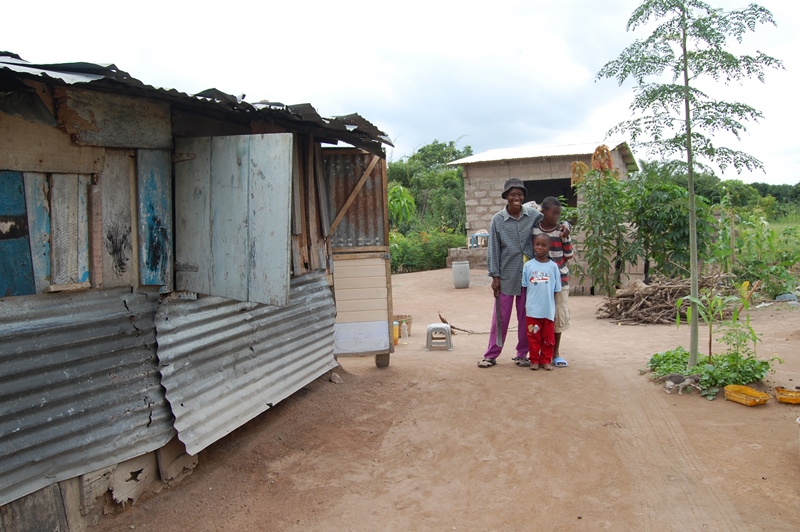 Once he was reunited with his family, Mawulolo filed a report with the police. His abuser was sent to prison. Mawulolo received counselling and with the help of Compassion and their local church, his family was able to get their land back and build a new home.

Mawulolo is now thriving at his Compassion centre. He’s seen as a hero among the children there because he was brave enough to tell the police what happened to him. Mawulolo insists on sharing what he learned with the children around him.

“Be careful of strangers who promise nice things. Many are liars who would destroy lives,” he says. “I ran from home because I felt no one cared about me. Now I know that Compassion cares, the police care and my mother loves and cares for us. I feel happy and I shall never go back to the street.” 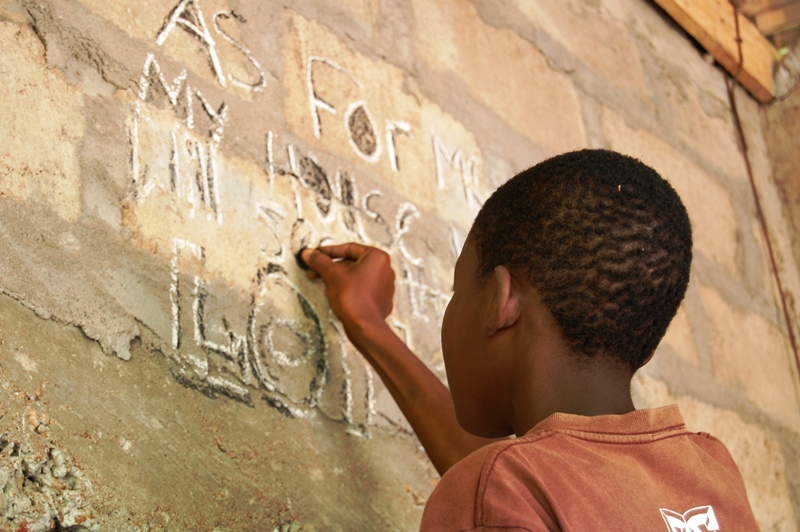 No matter what country you live in, the streets are an unpredictable and dangerous place to live. Children are especially vulnerable. That’s why child development centre staff strive to make sure these kids don’t fall through the cracks, but are brought into the sponsorship program and given access to education, medical care, nutrition and the protection and care of loving adults. Whether living in a house or a slum, a barrio or an alleyway, every child deserves the chance to be freed from poverty!

“Is it not to share your food with the hungry and to provide the poor wanderer with shelter—when you see the naked, to clothe them, and not to turn away from your own flesh and blood? Then your light will break forth like the dawn, and your healing will quickly appear; then your righteousness will go before you, and the glory of the Lord will be your rear guard.”