As people committed to fighting poverty in Jesus’ name, these statistics are simply unacceptable. They compel us to listen well to our Indigenous neighbours when they speak up about the systemic oppression, colonization, discrimination, violence and exclusion that they’ve endured. They motivate us to familiarize ourselves with the United Nations Declaration on the Rights of Indigenous Peoples (UNDRIP) and in Canada, the Truth and Reconciliation Commission’s 94 Calls to Action—paying special attention as Christians to the Calls to Action for churches and faith groups.

As Canadians and as Christians, we have a lot to recognize and reconcile when it comes to injustice against Indigenous peoples. Rather than shy away from this immense task, we are motivated to live out Jesus’ call to love our neighbours.

Around the world, many of Compassion’s local church partners are part of Indigenous communities. As we mark the International Day of the World’s Indigenous Peoples, we want to highlight and celebrate the beauty, resilience and stories of just a few of those communities…

The Fulani, also called the Fulbe or Fula, are the largest nomadic pastoral community in the Northern region of Burkina Faso. The major activity of this people group is raising cattle.

Oureira and Abdoul are both part of the local Compassion centre. Donning their tribe’s traditional clothing, accessories and face markings is an important way for them to showcase their culture. 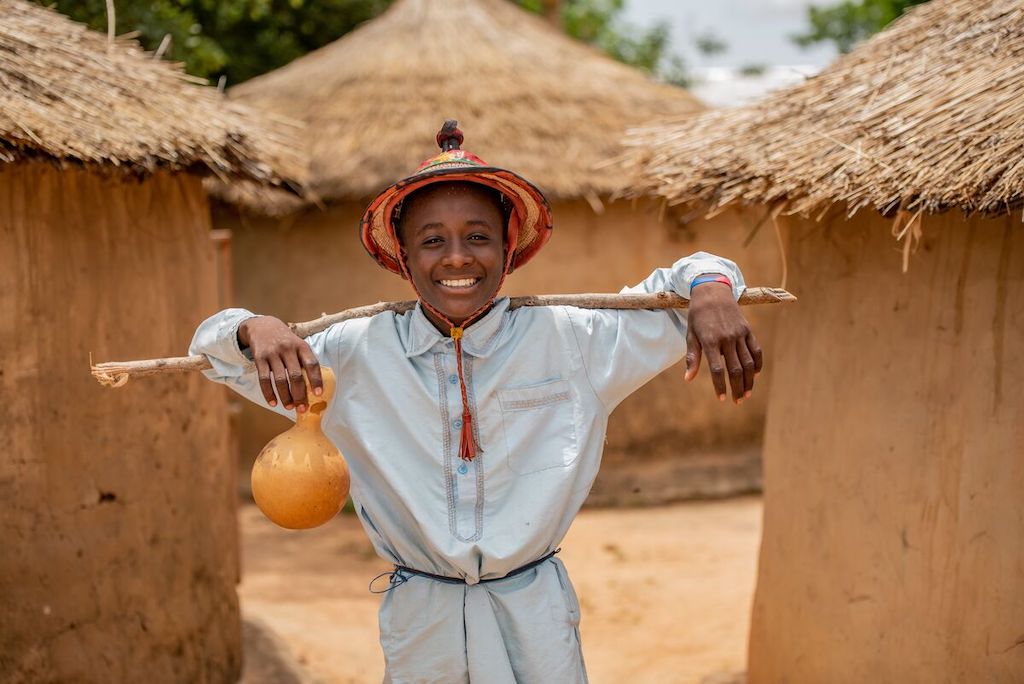 One of the features of the Fulani’s traditional attire is the men’s hat. A Fulani boy is expected to know how to weave a hat of fresh grass while herding the cattle. Twelve-year-old Abdoul rarely leaves home without his hat. He also carries a stick on his shoulders as part of his after-school responsibilities as a shepherd. “Like King David in the Bible,” he says. 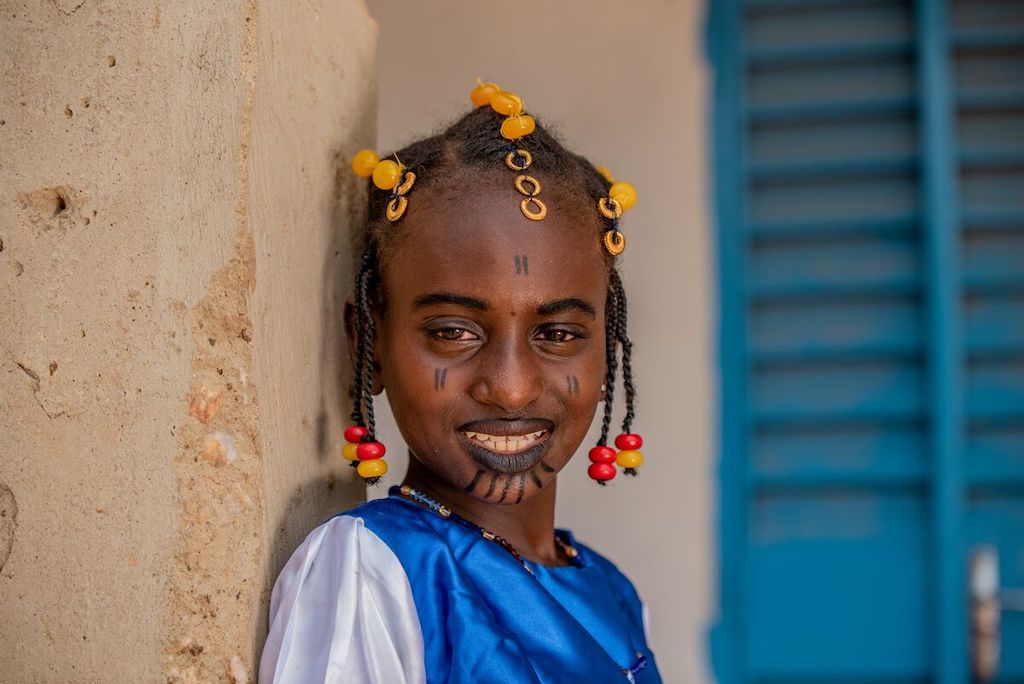 Amongst Fulani women and girls, colourful necklaces and bracelets are very popular, and mothers like to pass on their bracelets to their daughters as an inheritance. The traditional hairstyle of Fulani women is very practical, related to the livelihood activities of the tribe: “I wear a hairdo called rononkene yougoure, which means ‘I am carrying a pot on my head,'” says 11-year-old Oureira. This refers to how Fulani women traditionally carry a calabash, or milk bowl, on their heads.

At their Compassion centre, Abdoul and Oureira are empowered and equipped to live out the beauty of their culture, with staff incorporating traditional dance and music into the centre’s activities. For Compassion centre staff, it’s important that children embrace the full beauty and diversity of who God created them to be. 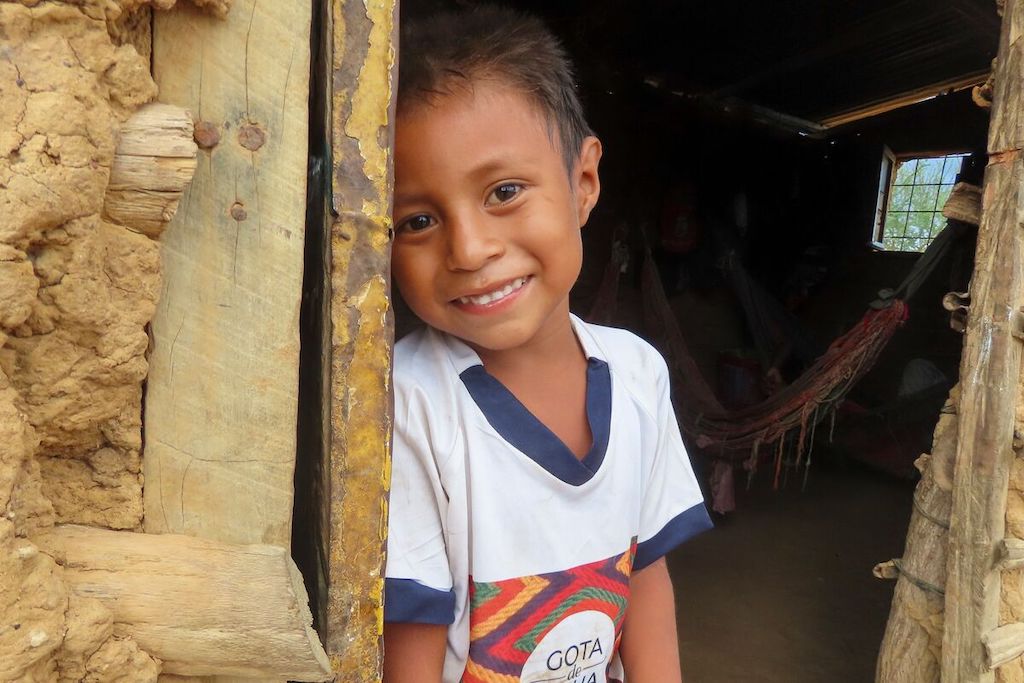 The Wayuu people live in the desert near the Caribbean coast in Colombia. The community experiences high rates of extreme poverty, and the COVID-19 pandemic has exacerbated this reality for many.

The Wayuu peoples’ native language is called Wayuunaiki. Six-year-old Alirio speaks in Wayuunaiki as he shares about his experience of the pandemic: “I feel happy about being with my siblings. Also, when we receive food. I want to thank God for the food I receive and thank the centre that gives us food.” 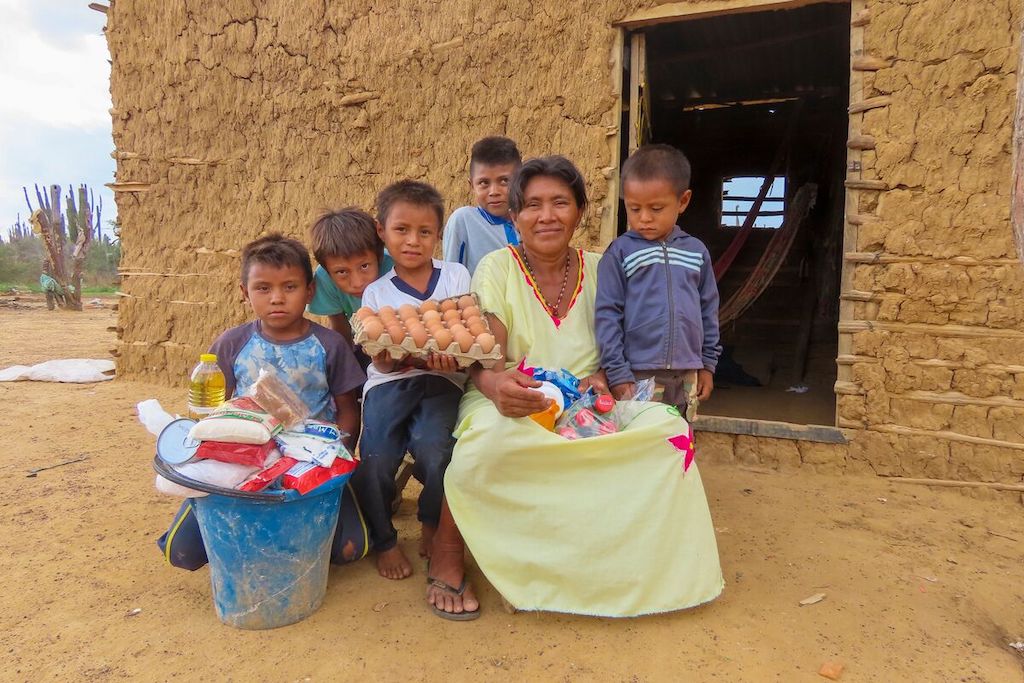 Alirio and his family in front of their home with a food basket delivered by his Compassion centre.

The pandemic has been a harrowing experience for many Wayuu families, who have experienced job loss and significant economic strain. But having Compassion’s local church partner walking alongside them, delivering emergency food packs and providing emotional and spiritual support, has made all the difference. 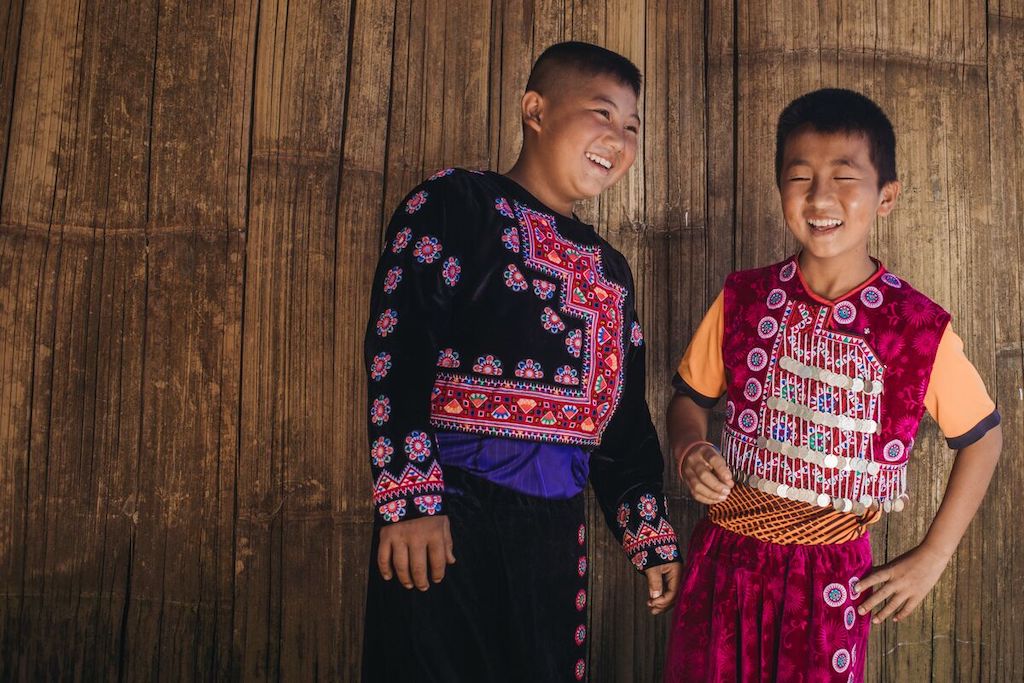 The Hmong people, also known as the hill tribe people, are an ethnic group in Thailand and the surrounding region. Their distinct cultural dress is an important part of their pride as a people.

Sorrapong is the Compassion centre director in a Hmong village in Thailand. Sorrapong shares, “In this village, it’s common for most children to drop out of school by grade 9 and not continue further education. The girls get married and boys work in agriculture. [Through the Compassion program], the children have been encouraged to pursue further education. We have seen a lot more children come to the church and hear about God’s love for them.” 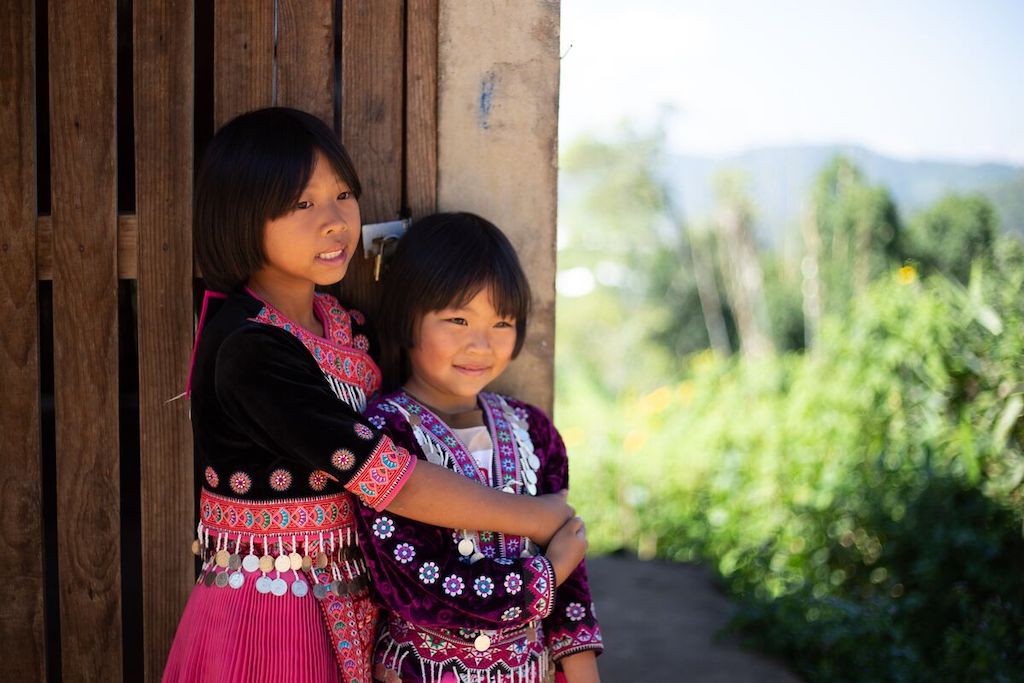 Education is a powerful tool in the fight against poverty, but many Indigenous people disproportionately lack access to education and learning opportunities. In the communities where we work around the world, Compassion ensures that Indigenous children have the opportunity to pursue an education to help them flourish and thrive. 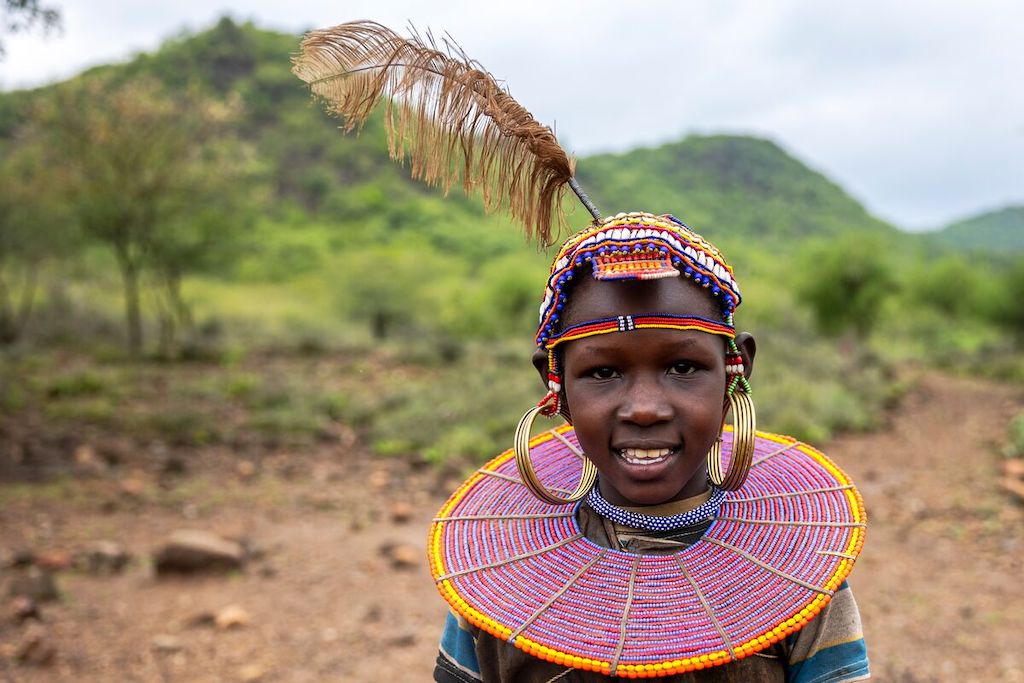 The beautiful traditional dress of the Pokot people is unfortunately also associated with some ugly practices: “Girls wear goatskin made by their mothers before they undergo Female Genital Mutilation (FGM), with the beadwork signifying she is ready to be married,” explains Mencho, a staff member at one of the four Compassion centres that serves Pokot families in Kenya’s North Rift Valley.

In response, these four Compassion centres work to both help children celebrate their culture while also working vigilantly to end harmful practices like FGM. They run regular child protection training workshops to educate girls and their families about the harmful effects of FGM.

“The training helps reduce chances of girls going through FGM and avoid early marriages among the children,” says Faith, a Compassion centre director.

For both boys and girls, the Compassion centre has worked to provide alternative rites of passage for Pokot youth through a program they call ROPES (Rites of Passage Experiences). They also ensure youth have mentorship opportunities. 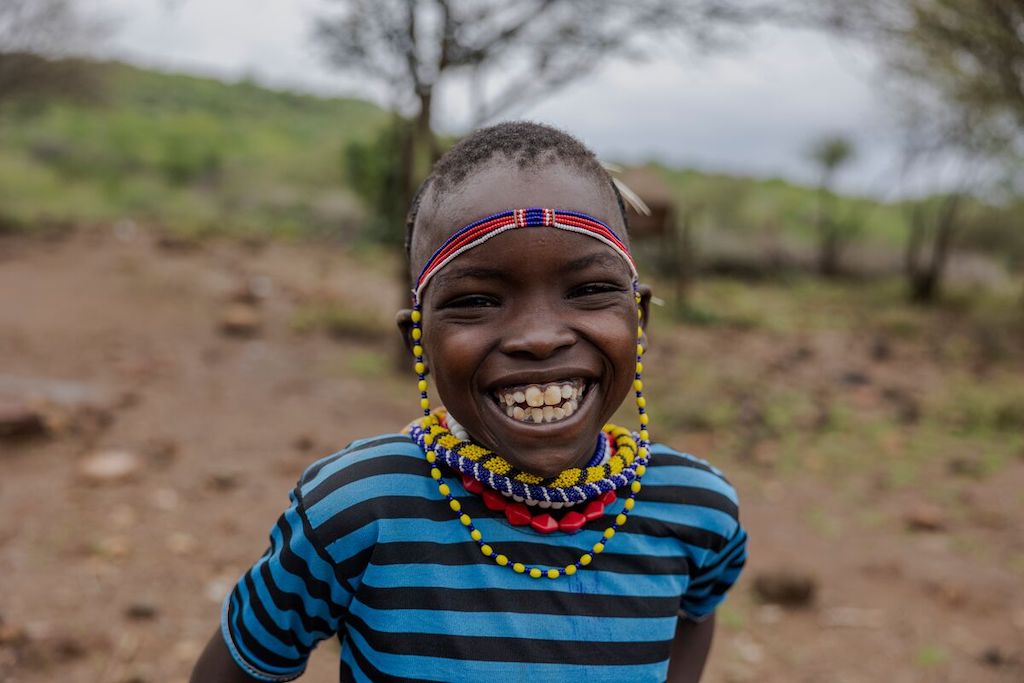 There are over 100 Indigenous tribes in the Philippines, including the Agta people, who live on the mountains of Iriga in the Bicol province.

Filipino children learn about the Agta people in school because they are considered one of the original peoples of the islands. But what the textbooks do not mention is that today, the Agta people are looked down upon and not given equal treatment in society. 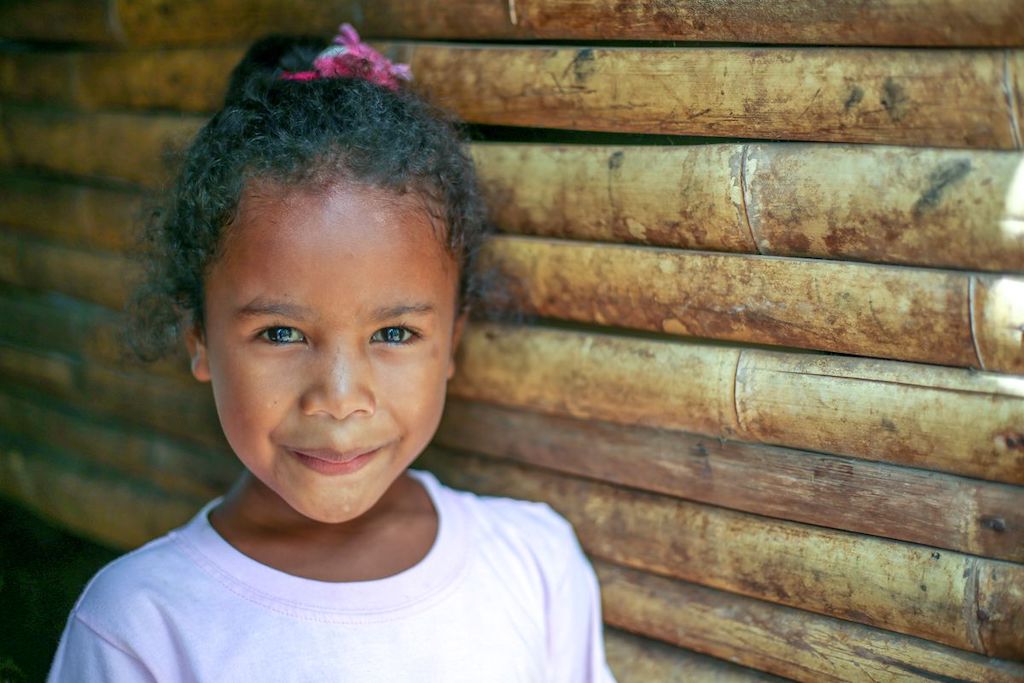 “Our ancestors used to own this land,” said Felipe, the father of 8-year-old Pauline, who is a Compassion-sponsored child. “Now, some rich family owns it, and we are considered squatters. We don’t have equal opportunity, so we just rely on our old ways. We feed from the root crops and vegetables that we plant. We just have to work hard every day so we can have something to eat on that day.”

Felipe only reached the second year of high school, while his wife, Myla, only studied up to grade 4. Both had to stop schooling because their parents couldn’t afford it. Working on the farm was a higher priority than reading books. 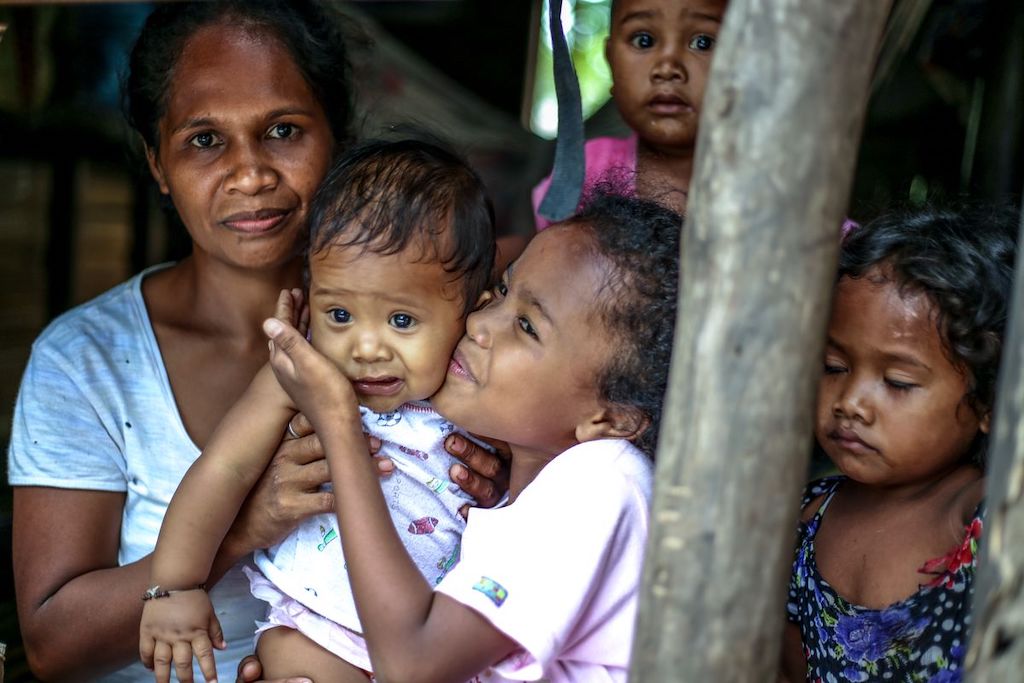 Pauline with her mother Myla and her siblings.

As of 2018, only two people from Pauline’s community had finished college. But thanks in large part to Compassion’s local church partner in the community, things are changing. “[The children] are eager to learn and are hopeful to graduate from college someday,” says Chona, a Compassion centre staff.

Pauline is a successful student, earning honours in her classes. “I am so proud of my daughter,” says Myla. “I can’t read at all and now Pauline is much better than me. I am so thankful for the help that Compassion is giving. My dream for Pauline is that someday she can finish college and get a good life.”

As Cacique Magno Guajajara walks with his son Kaio through the village where they live, he tells the story of their people, the Guajajara tribe. He is the Guajajara’s chief leader—Cacique is the title of his position, and he adds Guajajara to the end of his name in line with a common practice of his people that honours their heritage. When Cacique Magno tells his son their people’s history, he believes he is also teaching about their culture and preserving it.

“Although people say Brazil was ‘discovered’ in 1500, the history of the Indigenous people in Brazil isn’t only 500 years old. We were here before the colonizers arrived. We already had history, language and culture,” says Cacique Magno. 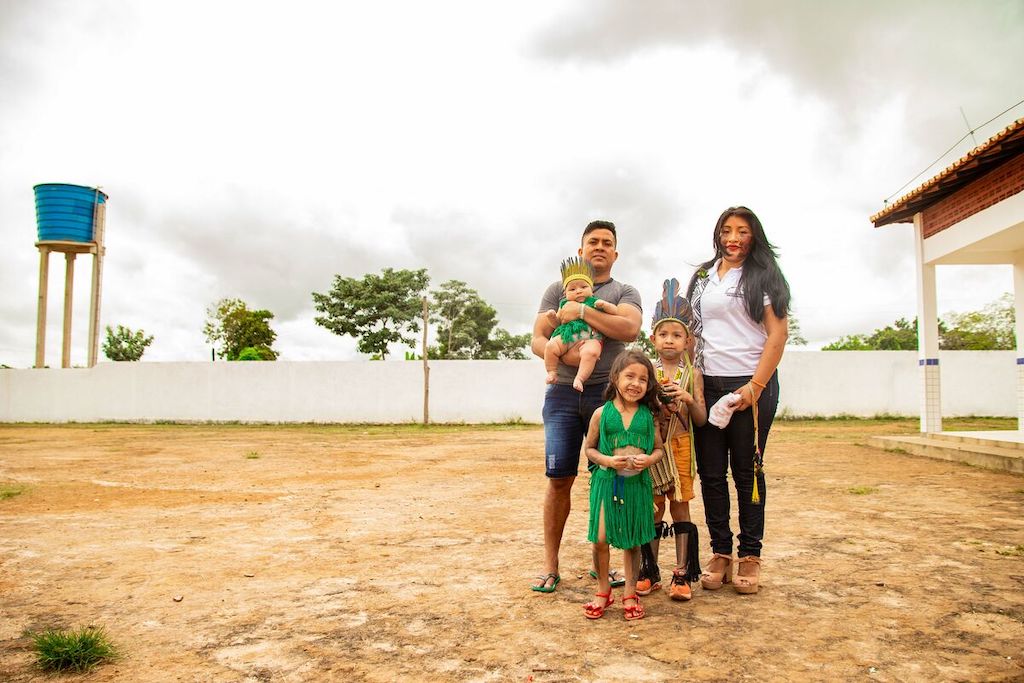 Cacique Magno his wife Michelly and their children Kaio, Kaila and Mayara.

When Portuguese colonizers arrived in Brazil, the Indigenous population was approximately 5 million people. Now, according to the 2010 census, the population of Indigenous people in Brazil is less than 1 million.

“European colonization decimated part of the Indigenous population. It was a real genocide. Colonizers destroyed their villages, tried to destroy their culture and even today, Indigenous people live with the consequences from that period,” says Pastor Jairo, the pastor of Compassion’s local church partner in the community.

Pastor Jairo and his wife Geane have worked in the Guajajara community for 16 years. Though they are non-Indigenous, the community welcomed Pastor Jairo and Geane when they saw the couple’s commitment to valuing local culture and promoting opportunities for children. 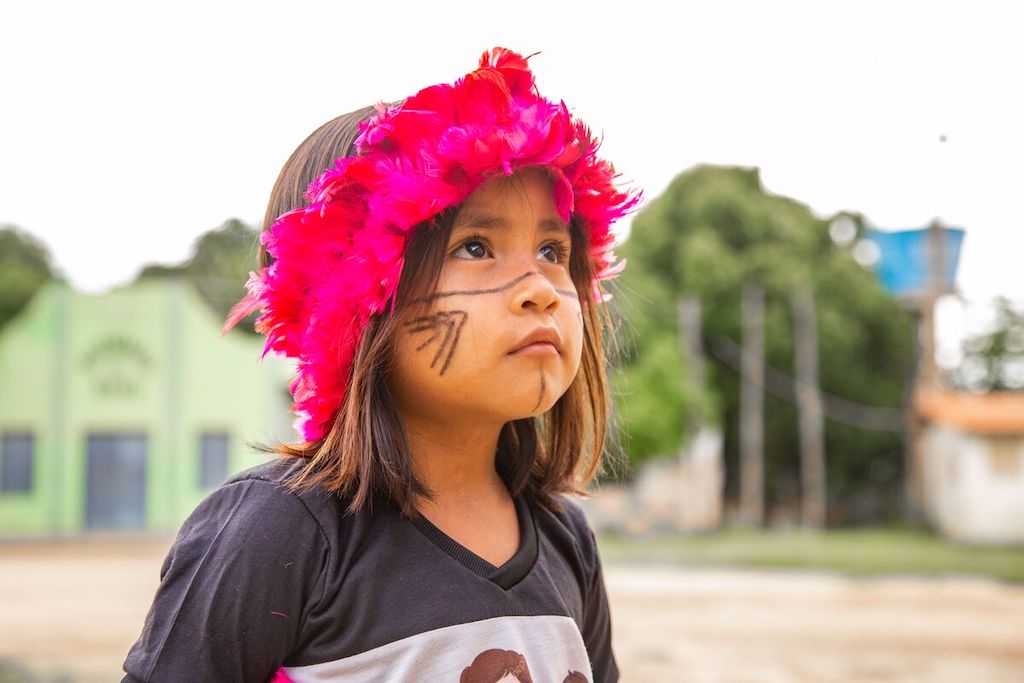 “At the centre, children learn to be proud of our culture while learning Portuguese and a little of [non-Indigenous] culture. Geane always promotes activities on the National Day of the Indigenous Person and helps us with the festivities of our tribe,” says Cacique Magno.

The partnership is all about giving children opportunities for a better future for themselves, their families and their tribe. “Although we are Indigenous and have our culture, we need to know how to interact with non-Indigenous people,” says Cacique Magno. “How will we fight for our rights if our children cannot speak Portuguese? How will we defend our culture if we don’t open up to other knowledge? Knowledge is freedom.” 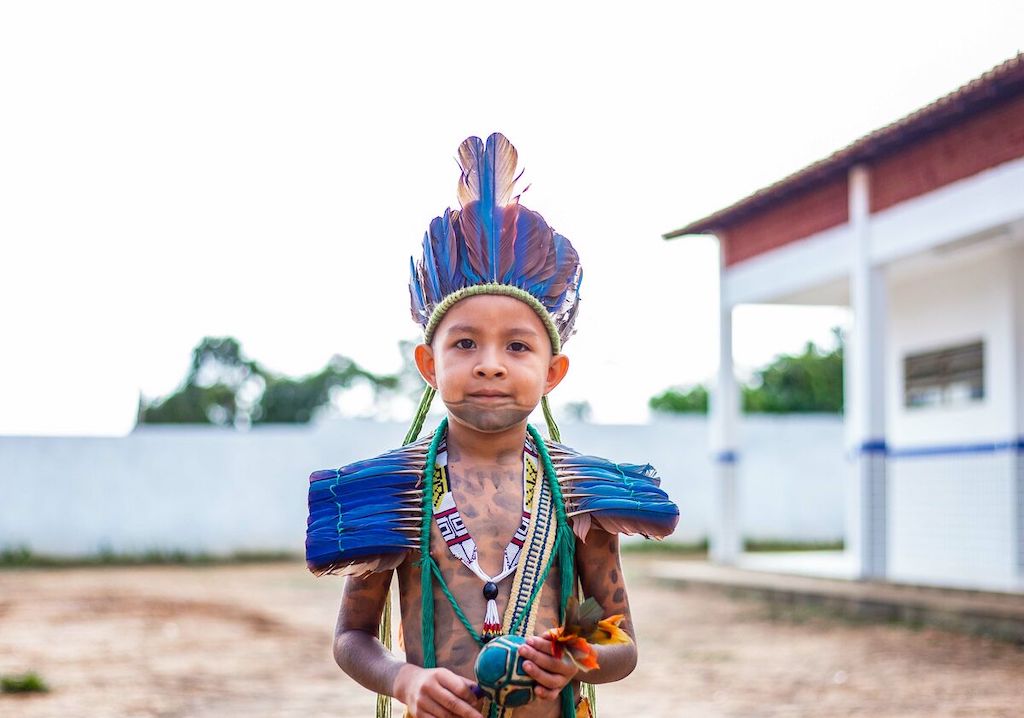 Kaio beautifully embodies the pride of being Guajajara. “I like being Indigenous. To be an Indigenous person is to speak my language, Tupi-Guarani, and to enjoy nature,” he says.

When Kaio repeats the new words he learned in Tupi-Guarani from his father, he recalls his favourite word, renuã, which means, “I don’t know.” Kaio doesn’t know many things yet, but he does know that he loves being Indigenous like his father and that together, they can dream about the future.

How will you honour and celebrate the world’s Indigenous peoples today?

Feature photo caption: Children from the Guajajara tribe in Brazil